Considered by some authorities to be a separate species and by some to be a sub species of Lesser Whitethroat (sylvia curruca) the Hume’s Whitethroat is one of those species that occurs in the far southeast of the Western Palearctic as a scarce passage migrant and very occasional winterer. It is treated as a full species by Clements.
This article is based on our experiences of the species from several spring tours to Kuwait. Although not a regular migrant even here it is undoubtedly overlooked to some extent due to poor observer coverage and confusion with Lesser Whitethroat which is a very common spring migrant through the state.
Range – The breeding range of Hume’s and Lesser Whitethroat do not overlap.  Hume's Whitethroat is an upland breeding species with its range extending  from eastern Iran eastwards to the Tian Shan mountains of central Asia and the western fringes of the Himalayas. It breeds at altitudes of 2,000–3,600 m in open scrub, often with juniper, and also in cultivated areas such as almond orchards. It migrates south to southern Pakistan and India in the winter with wintering also having been noted in south Iran. Clearly its spring passage includes Kuwait on the very western edge of its migration route.
Voice – Although unlikely to be heard from a migrating bird this is very different from Lesser Whitethroat being an almost Blackcap-like warble with a slight scratchy quality. The migrant birds we have observed tend to be silent unlike the very vocal Lesser Whitethroats.
The song can be heard here  http://www.xeno-canto.org/sounds/uploaded/HZKCNRIPRH/HumesWhitethroat20May2008DzhabaglyKazakhstan.mp3
Size – When seen alongside a Lesser Whitethroat at Al Abraq in western Kuwait it is clearly a larger more bulky bird with a correspondingly heavier bill. Its movement was also noted to be more ponderous.
Plumage – In comparison with Lesser Whitethroat, Hume’s gives an overall darker impression. The mantle is much greyer (especially in 1w birds) as is the nape and crown which means there is no real contrast between head and mantle colour. The crown itself is darker grey than Lesser and the ear coverts are very dark (sometimes appearing almost black) but due to the darkness of the crown the contrast is very much less than in Lesser. 1w birds and some spring birds show a dusky wash on the breast and flanks contrasting with a white throat.
Habits – being a bird of low mountain scrub migrants tend to shun larger bushes and trees, preferring low vegetation. They are also often seen on the ground and in this tend to closely match the behaviour of Menetries’s Warbler (sylvia mystacea) which often shares the same areas. 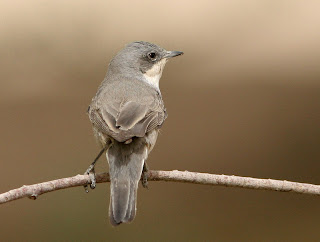 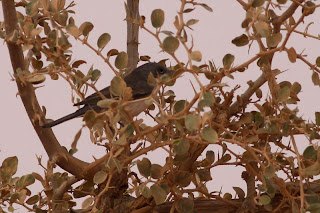 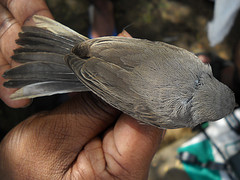 Hume's Whitethroat, trapped. Note the mantle and head are the same colour.
Posted by Chris at 21:13