A glorious sunny afternoon and I finished work at lunchtime.What a great time for a White Stork to turn up just down the road!
I found the bird straight away while still driving but managed to park and walk out towards it along a footpath. With a bit of fieldcraft I managed to get within about 30 yards of it as it fed completely oblivious to my presence. It was unringed and seemingly in good condition but with White Storks these days know knows! A Stock Dove was also in the field and on the walk back a gorgeous male Yellowhammer sat in a hedge while a late Small Copper flitted along the field edge.
Earlier I'd had a garden first in the form of a Willow Emerald that sat all too briefly on our statue before disappearing high into the blue sky. There have also been several Large Whites in the garden and a single Common Darter. 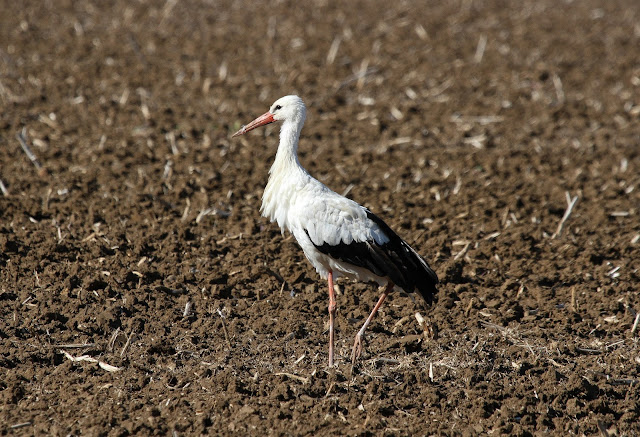 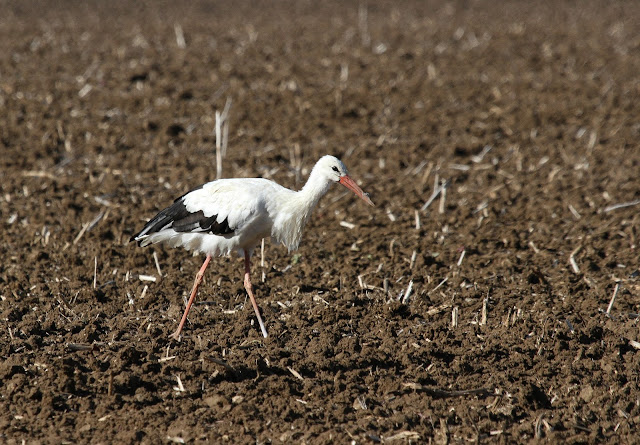 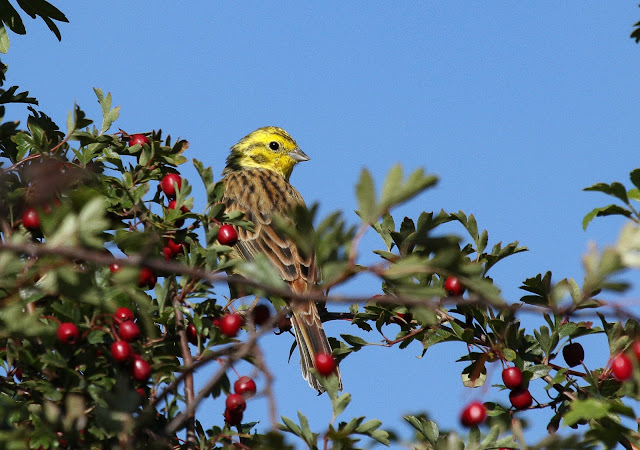 Yellowhammer
Posted by Chris at 18:25 No comments:

A weekend of hill walking from our base at the Moorcock Inn at Garsdale Head.

Not a huge amount of nature action to report. Birdwise a couple of Red Grouse above Keld where there was also a single Raven plus a Bank Vole scuttling under a wall on the edge of Muker. Apart from 2 or 3 scattered Grey Wagtails, Sparrowhawk, Nuthatch and plenty of Mistle Thrushes the best sighting by far was a lovely Red Squirrel which showed very well on grass and then on a dry stone wall in Widdale just SW of Hawes. There were also plenty of hirundines still about plus Red Admirals, Small Tortoiseshell and a late Green-veined White.
Posted by Chris at 18:50 No comments:

The weekend started off with a frustratingly long drive to North Norfolk on Saturday where Belinda and I did a long 14km walk from East Runton. Birdwise it was quiet with just a noisy pair of Nuthatches in East Runton village and a mixed flock of House Martins, Sand Martins and Swallows along the clifftop at West Runton followed by a single Swift just west of Cromer Pier at dusk. As we'd started late we ended up having a night out in cromer too.

Fast forward to Sunday. After a morning of doing chores (opticians etc) in Norwich I grabbed a quick lunch and headed to Minsmere for the afternoon. Meeting Matthew Deans and Adrian Kettle by the centre we headed to West Hide where luckily I was able to pick up the 1w Citrine Wagtail within a pleasantly short space of time! It had been ranging all over the scrapes and seen from various hides so it was nice to connect so quickly. I was particularly keen to see it as it was my first one in the UK for 22 years - I suddenly feel old! I didn't stay long at Minsmere but added Green Sandpiper, Little Egret and Cetti's Warbler before departing for Kessingland. Parking at a new spot which cut the walk down to a couple of hundred yards (!) the Wryneck of the last couple of days was showing nicely on arrival near the sluice and went on to provide some memorable views. Pity I'd not brought my camera out! I went on a wander down as far as Beach Farm, Benacre after that but things were quiet. I did however clock up another late Swift, 3 Wheatears, loads of House Martins moving south, 2 Little Grebes on the pits, Stock Dove, 2 Stonechats and Green Woodpecker. 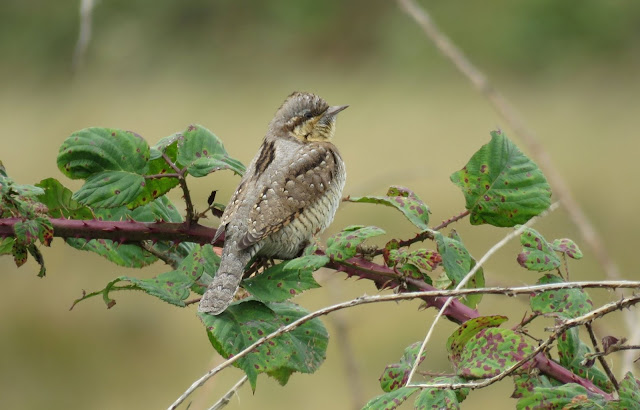 Cromer Pier was looking rather nice!
Posted by Chris at 18:54 No comments:

On my recent trip to North Queensland I was lucky enough to find some of the so-called 'Heberton Honeyeaters' at Springvale Road, about 10km SSE of the town of Heberton.

These honeyeaters have been discussed at length for some time, most publicly by Lloyd Nielsen in his excellent book Birds of the Wet Tropics of Queensland and Great Barrier Reef and How to Find Them (there's a long book title!). They seem to fit into neither Yellow-tinted Honeyeater or Fuscous Honeyeater for the reasons Lloyd describes. I had literally no experience of any species of honeyeater before my trip but I was able to watch c18 of these interesting birds in the mixed (but predominantly pine) forest along Springvale Road and even get a few pictures. To me they look like dull Yellow-tinted Honeyeaters although I realise that voice, behavoir, nesting, habitat etc all need to be taken into consideration alongside just physical appearance. Several of the birds I saw were fully-grown juveniles which interestingly had distinct two-tone bills which according to my field guides is only shown in Fuscous Honeyeater. They also seemed to spend most of their time in pine trees, often clinging to the trunks and large limbs, something I didn't see any other species of honeyeater do. 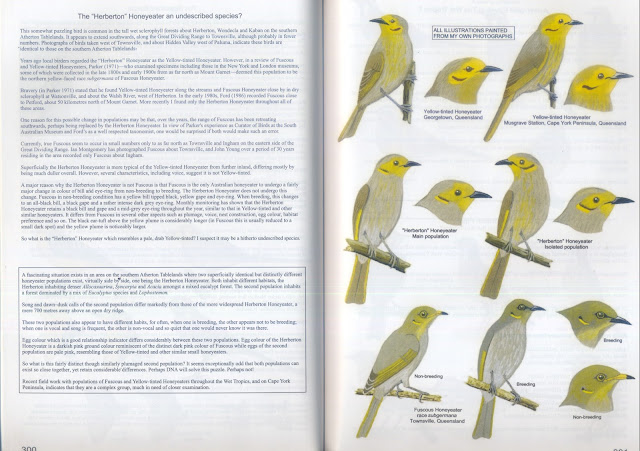 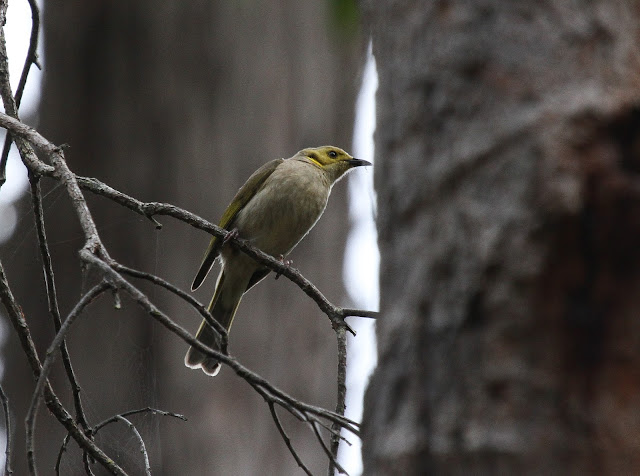 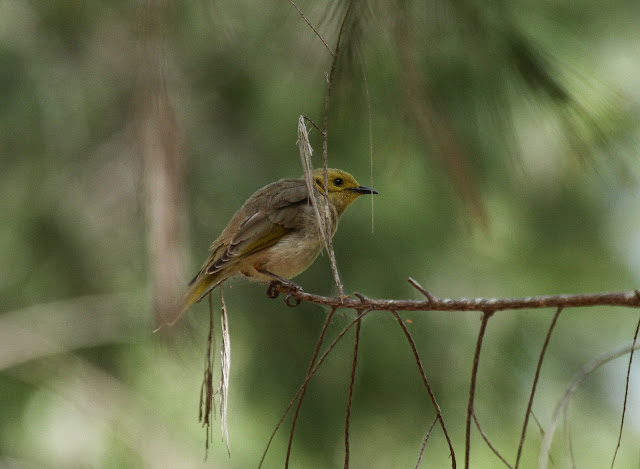 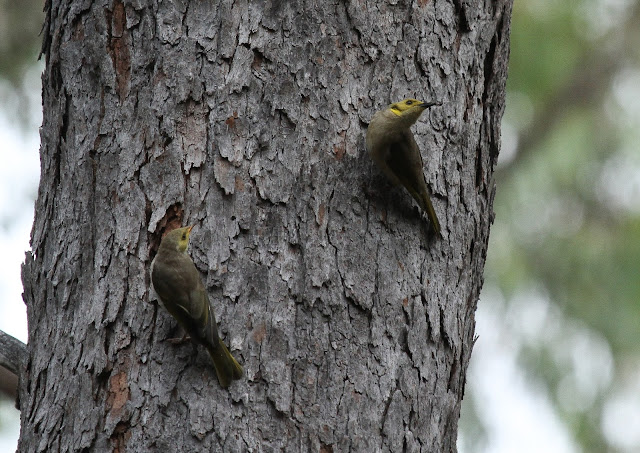 
They have gone on my list as Yellow-tinted as I really can't see them being Fuscous but I stand to be corrected by anyone who knows better. I can't quite understand why a simple DNA test couldn't resolve the puzzle. A job for an enterprising Aussie birder maybe...?