We spent today around a few sites in East Anglia which sadly have to remain secret. This is due to the fact that the main site we visited holds the UK's only remaining Early Marsh Orchids of the critically endangered subspecies 'ochroleuca'. They were out and in pristine condition and I was pleased to count 18 plants this year. Also at this site and nearby similar sites were the rather more common 'incarnata' subspecies of Early Marsh Orchid along with the numerous purple hybrid variations this species seems to produce, presumably with Southern Marsh Orchid which was also present. Common Spotted Orchids are just starting to come into flower and the nearby Yellow Flag Irises were in perfect condition too. Birdwise, a Nightingale flew across the path right in front of us, a Cuckoo was in full cry, a Common Buzzard soared overhead and 7 species of common warbler were seen and/or heard. 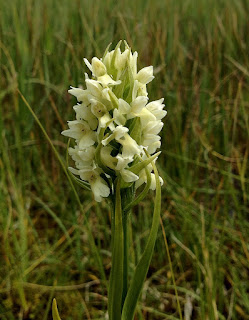