A trip to Georgia for some high Caucasus specialities has been on the cards for a few years now and the usual crew of me, Jus and Andy were back in action after a couple of years break.
I’d been in contact with the company Explore Georgia last year when I’d planned to lead a tour there so used my contact there to arrange transport and a driver to pick us up at Tbilisi airport and take us to the village of Kazbegi and vice versa at the end of the trip. They also negotiated a half board deal for us at the trendy Hotel Rooms in Kazbegi.

Flights were booked with Pegasus whose flights were far cheaper than any others we found (£305 return from Stansted to Tbilisi via Istanbul). The only downside to this were some rather unsociable flights times (arriving at 02.50 and departing at 04.40) but this seemed a small price to pay for the reasonably priced flights.
For anyone contemplating a similar trip there are a few practicalities you will need to consider:


·        There are 2 other accommodation possibilities in Kazbegi – the Hotel Stepantsminda and various cheap and cheerful homestays. The Hotel Rooms we stayed at is a large modern but rustic hotel on the eastern edge of the village with the emphasis very much on quirky wooden interiors. The food was generally hot and cold buffet style with breakfasts being reliably good with evening meals slightly hit and miss but still generally good. A bottle of the local beer Zedazini was about £1.70


·       The village has a small number of basic grocery shops and a couple of cafes but not much else.


·       Transport isn’t really needed once you’re in Kazbegi. Most of the sites are within walking distance and for those that aren’t local taxis can be used.


·       The availability of Caucasian Great Rosefinch and Guldenstadt’s Redstart is hugely dependant on the weather conditions. If the snow is at low level around the village they should be present at low levels. When the snow melts the birds retreat up into the mountains and go to seriously high levels (above 10,000 feet!). It requires huge efforts to even get up to that level, let alone finding the very thinly distributed birds. Early May has been seen as the prime time to go in the past because the Krestovvy Pass (approx. 15 miles south of Kazbegi) is often closed due to snow up to the end of April even though they try to keep it open. Some birders have been stranded either side of the pass for days waiting for it to become passable. Our trip coincided with blue skies, temperatures of 20 degrees and the snowline at about 9,000 feet!


·       Georgian currency (the Lari) isn’t available outside Georgia. It is recommended to take US Dollars to change into Lari as not many places will change Sterling. We found a currency exchange open at the airport even at about 04.00 in the morning. There isn’t anywhere to exchange currency in Kazbegi.


Despite a late arriving flight our driver was waiting for us at Tbilisi airport and we were soon on our way through the city and northward on the Georgian Military Highway that leads to Kazbegi and onward to the Russian Border. The whole drive is about 4 hours. After stopping at a 24 hour shop on the edge of the city for supplies we reached the Krestovvy Pass about an hour after dawn after an extremely bumpy ride up the terrible road. There was still a lot of snow here but the road was snow free (a pity it wasn’t tarmacked and pot-hole free!).


Scanning the steep hillsides to the west of the road soon revealed some Caucasian Black Grouse on the grassy snow-free slopes. We had 7+ in total (5+ males and 2 females). It was here we first bumped into a crew of Irish birders (Dermot Breen and friends) who we were to get to know quite well over the next few days. Also around the pass and approach road were 6 Twite (brevirostris race), 2 Whinchats, 2 Ravens, several Red-billed Chough, c12 Common Swifts, c6 House Martins (nesting in an avalanche gallery) and the ubiquitous Water Pipits (coutellii race) and Black Redstarts. A lovely male Montagu’s Harrier was a strange site heading north over the snow-covered mountains.
Whinchat, Krestovvy Pass 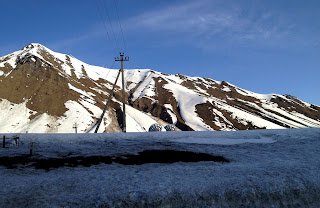 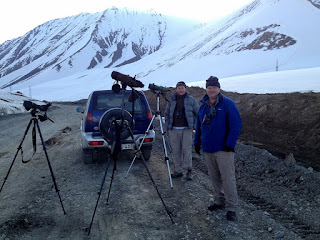 At the Krestovvy Pass
Reaching Kazbegi we were lucky to be able to check in to the Hotel Rooms in the morning and set off on our first birding/walking excursion out of the village soon afterwards. We headed SE of the village to the scrub and then the steep grassy slope that heads upwards between rocky crags. The woodland we passed gave us our first Caucasian Chiffchaffs while the scrub held a pair of Red-backed Shrikes, Ring Ouzels and  Cuckoo.  The walk up the slope was strenuous to say the least as it’s at a 45 degree angle but on the way up we found a lovely male Rock Thrush before we reached a spot to stop at. Scanning upwards from here located target no.2 – Caucasian Snowcock. Three birds were together with a male calling frequently well into the afternoon. From our vantage point we also had a singing Alpine Accentor, c10 Red-fronted Serins, Crag Martin, c8 Alpine Chough, 2 Caucasian Black Grouse and Griffon Vulture before the Irish boys came puffing and panting up the hill to scoop with the snowcocks we’d found for them! They were to return the favour later on in the trip!