Day 4 and by now we’d pretty much given up on the idea of seeing Guldenstadt’s Redstart. Nobody we spoken to had seen one all week and they were presumed to have dispersed to very high levels to breed. Today we decided to venture a little further so arranged a taxi to take us to the village of Kobi, about a 20 minute drive south of Kazbegi. On the way we saw our only Roller of the trip on roadside wires before we reached the ramshackle village. We worked the village thoroughly looking for a Wallcreeper the Irish boys had seen the day before but had no luck either in the village or on nearby crags. We had some good migrants here nonetheless. The pick of the bunch was a nice adult female Barred Warbler in low bushes in a garden whilst a pair of Red-backed Shrikes entertained,  2 Common Rosefinches flew over and then a male was heard singing and showed nicely. Also amongst the houses and rubble were Common Redstart, Caucasian Chiffchaff, Common Whitethroat, 2 Twite, Ring Ouzels, Mistle Thrush, 8 Common Swifts and loads of Black Redstarts.

Trying a small area of crags by the road added a nice pair of Rock Thrushes, Lesser Grey Shrike and fly through Black Kite and Sparrowhawk.

Lesser Grey Shrike, Kobi
Half a mile north a large crag overlooks the road so we got our taxi driver to stop here too. Again no Wallcreeper but c15 Crag Martins, 3 Alpine Swifts, 2 Steppe Buzzards, 2 Griffon Vultures, 4 Red-billed Chough, Wren and Grey Wagtail were seen. 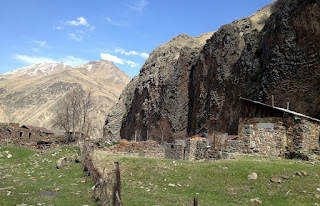 We were dropped off back in the centre of Kazbegi and after lunch opted to explore the riverside scrub and rocky slopes walking south on the west side of the river. A quick look at the wood just over the bridge proved a good idea with Great Spotted Woodpecker, 2 Cuckoos (including a lovely rufous hepatic individual) and several Common Treecreepers. Along the track heading south things seemed quiet with the only birds there seemingly good numbers of Red-backed Shrikes. Soon we were picking other things up – Rock Bunting, c8 Common Sandpiper, 3 Grey Wagtails and Griffon Vulture. Then a familiar call went up from the scrub by the river – the rasping of a Corncrake. Despite our best efforts we failed to chivvy it out though! Back down on the stony river bank Jus called a flying Dipper and as we moved in closer to where it had landed I walked almost up to a superb Red-necked Phalarope feeding in the shallows. It treated us to a real show down to about 3 meters! On the walk back we picked up Little Ringed Plover on a shingle island and another Rock Bunting which showed nicely on a low cliff.
Cuckoo, Kazbegi


Back in the village we tried the town park for migrants. On approach a single European Bee-eater hawked overhead whilst the park itself held Spotted Flycatcher, Great Spotted Woodpecker, Caucasian Chiffchaff and 2 Willow Warblers followed by 2 Griffon Vultures overhead through the trees.
Posted by Chris at 15:53