My primary aim of the day was to explore the Lake Mitchell area. On the way through Mount Molloy I wanted to check the area around the school. I located the local group of 3 Grey-crowned Babblers quite easily as they were conspicuously collecting nesting material. My other target proved much more difficult but eventually I saw 1 Squatter Pigeon in low flight over the school playing field but it disappeared behind some tennis courts and despite going into the school ground I couldn't relocate it.
I also saw a single Red-winged Parrot but a real stoke of luck was saved until the end when a mega Grey Goshawk flew low over the road! 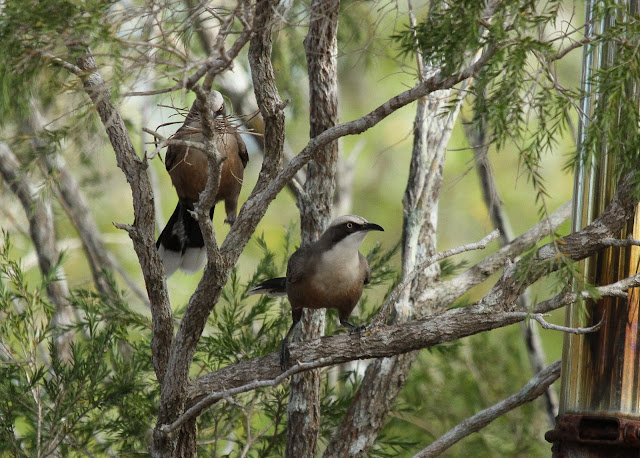 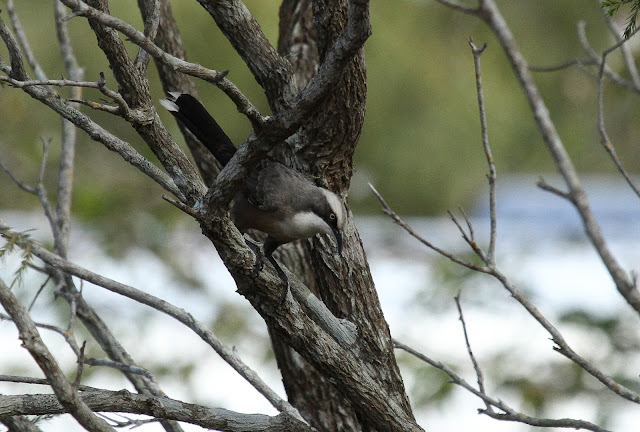 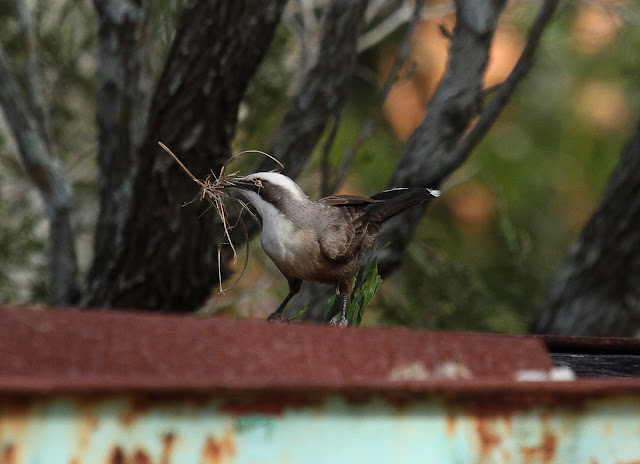 After grabbing a quick coffee a what had become my fave coffee place in Mount Molloy I headed south for Lake Mitchell. I wanted to check the dried up river bed of Mitchell Creek but in the end it proved really disappointing except for a showy Striated Pardalote, Yellow Honeyeater and 2 fly-over Red-tailed Black Cockatoos. I decided to quit that site and move onto the causeway that heads out into Lake Mitchell. A wooden gate is left unlocked and provided you close it behind you you're free to drive in - so I did! The water itself had birds but the variety was quite limited with just loads of Magpie Geese, Little Pied Cormorants, c12 Black Swans, Comb-crested Jacanas, 3 Australasian Grebes, 1 European Coot, 1 Australian Pelican and Great Egret but I did pick up a Fairy Martin over the track amongst the Tree Martins. Parking up at a gate which is the furthest you can drive I walked onto the island and birds started to appear - nothing fabulous but enough to keep me going - Red-winged Fairy Wrens, Chestnut-breatsed Mannikins, 2 White-throated Honeyeaters, Yellow Honeyeaters, Little Friarbird, White-bellied Cuckoo Shrikes, Leaden Flycatcher, Northern Fantail, Intermediate Egret, 4 Eastern Ospreys in the air at once and then a most welcome Pheasant Coucal which made me jump as I flushed it from beside the track! Back at the van a group of 4 Golden-headed Cisticolas responded to pishing for some point blank photos.
On the drive out a single White-necked Heron showed nicely from the track. 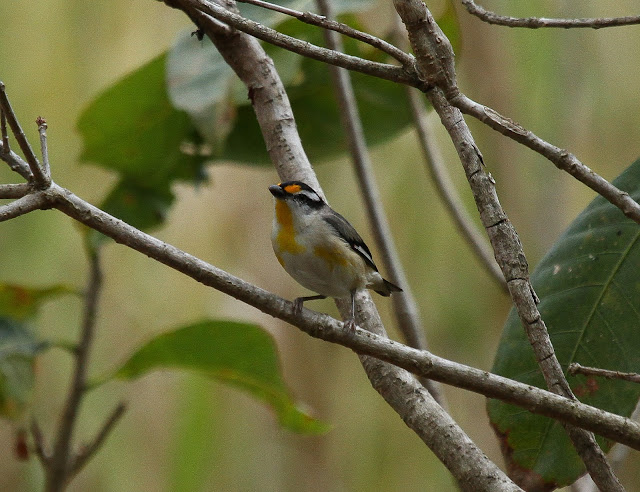 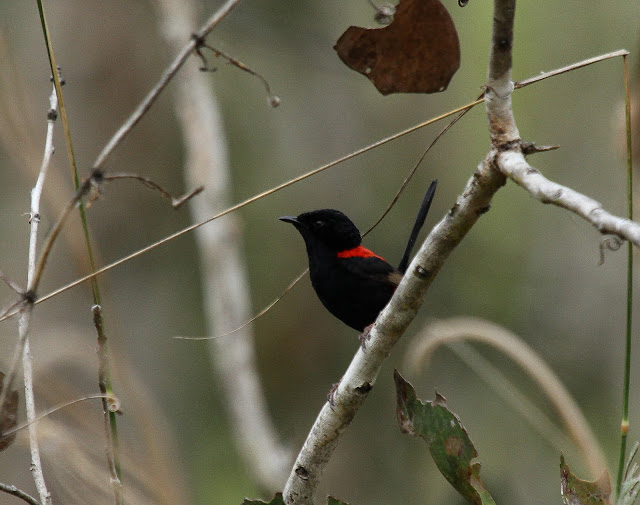 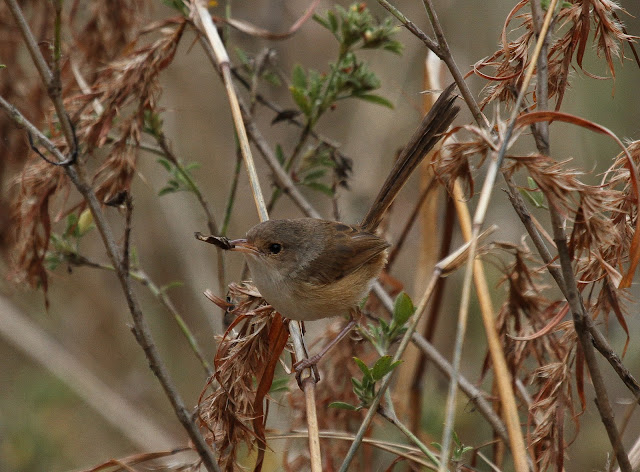 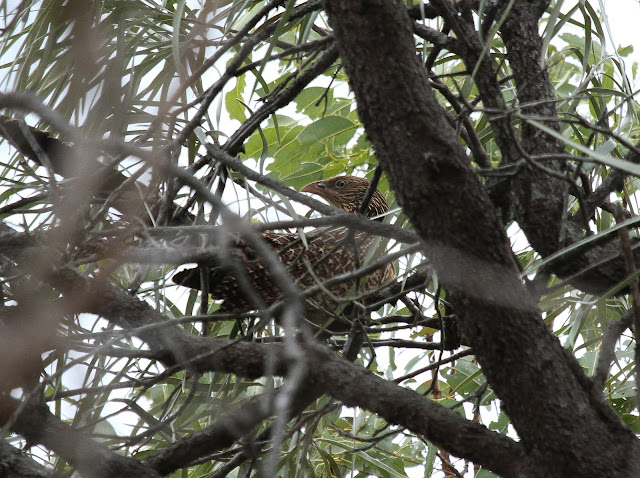 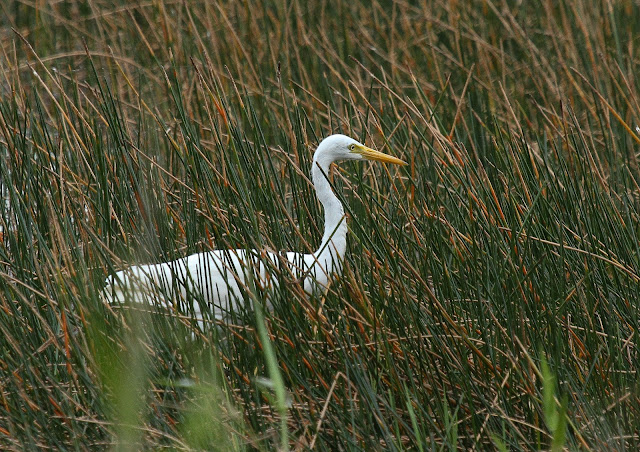 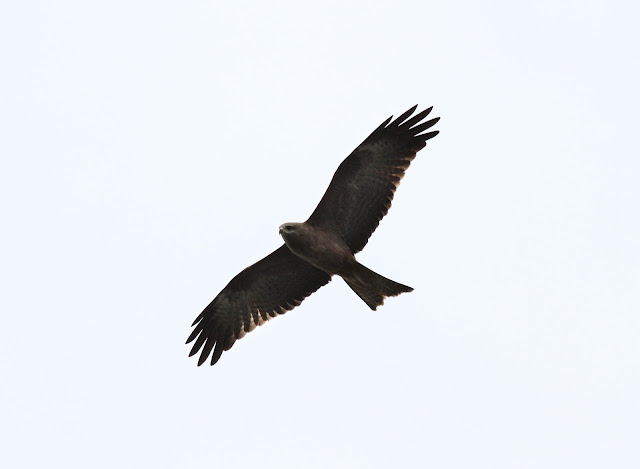 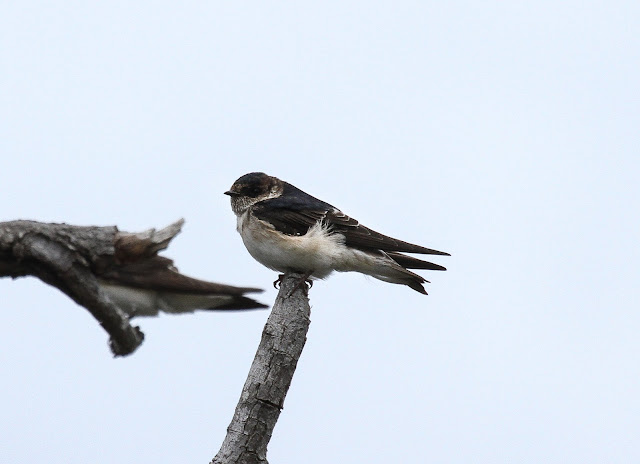 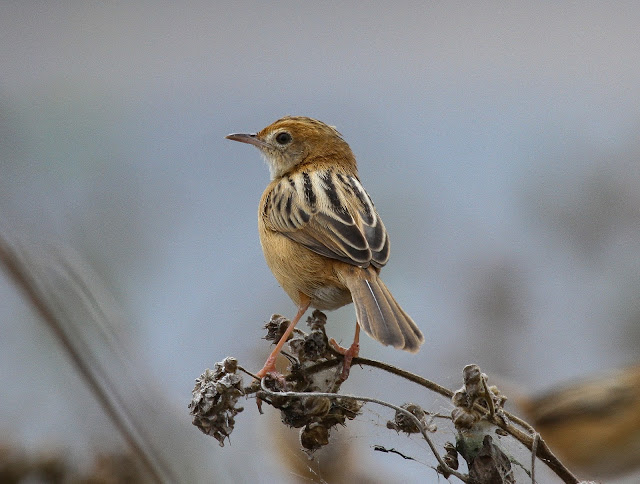 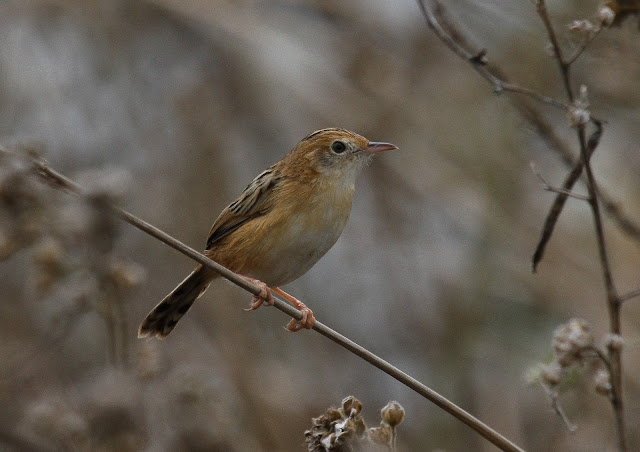 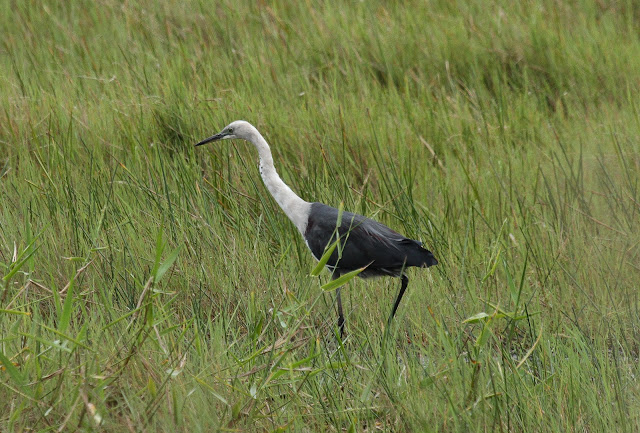 Just along the road was the side road of Quaids Road which has a good reputation for dry woodland sp. Parking up a male Red-winged Parrot didn't top long enough for a photos but Rainbow Lorikeet did. A new bird in the form of a nice Grey Butcherbird showed briefly and a party of 4 Grey-crowned Babblers were busy. Several Blue-faced Honeyeaters were tooing and frowing across the road and 2 White-breasted Cuckoo Shrikes completed the picture. 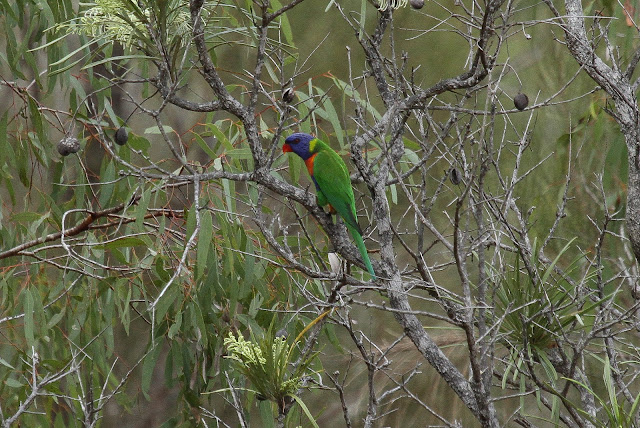 At the pull-in on the main road I took one last look at the lake where a couple of Little Black Cormorants were new, I managed to photograph a Fairy Martin and a confiding Brown Falcon was right by the road with Whistling Kite overhead. 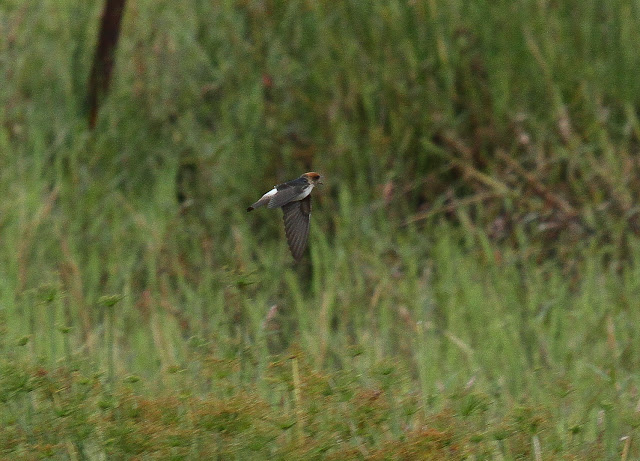 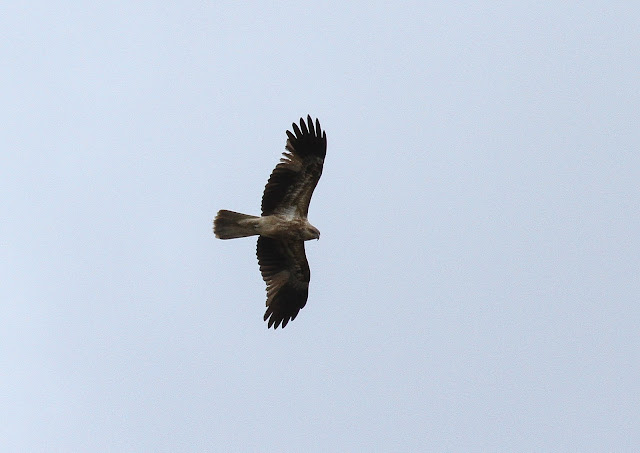 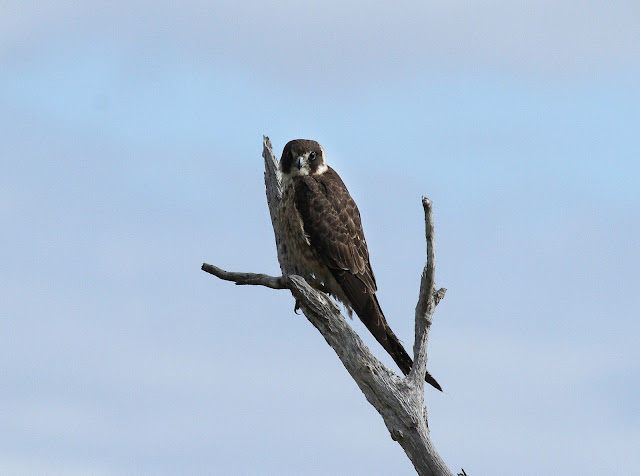 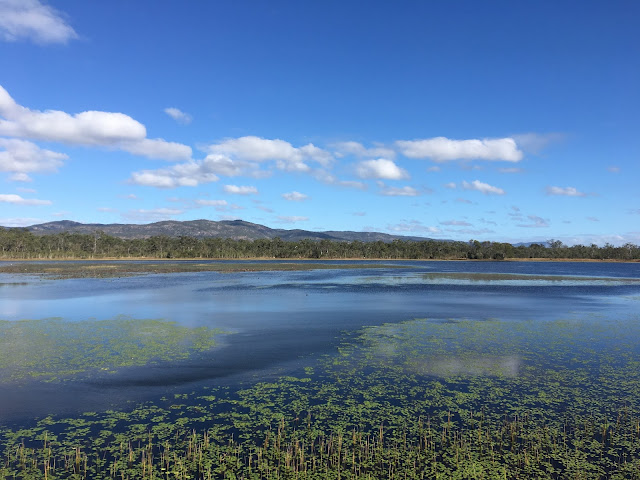 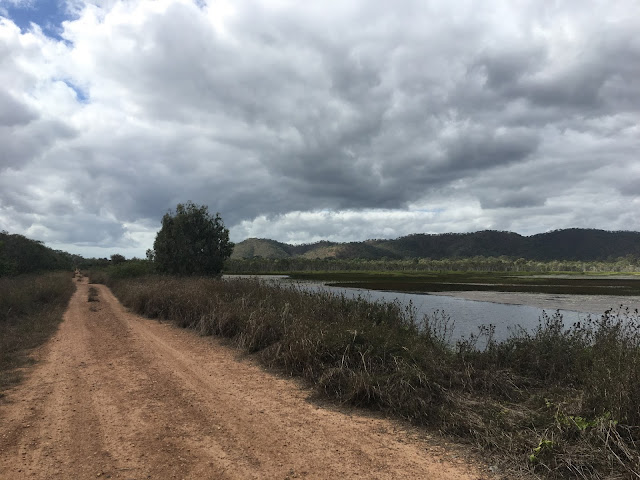 Back in the Julaten area I popped in to Abattoir Swamp but there was little doing so I moved on to the Sides Road Blue-faced Parrot-finch site and this time I scored even quicker than before with 8 birds crossing the path within 30 seconds of my arrival! They then paused to feed under the trees c30 meters back from the path and I managed to get some decidedly ropey photos. Into the bargain I also had a brif male Lovely Fairy Wren there and White-cheeked Honeyeater.

Back at Kingfisher Park I'd got directions to the regular roosting Papuan Frogmouth on the edge of the orchard and it proved quite easy to find even though it was a bit high up for good photos. In the failing light I saw a couple of Large-billed Scrubwrens beside my van. 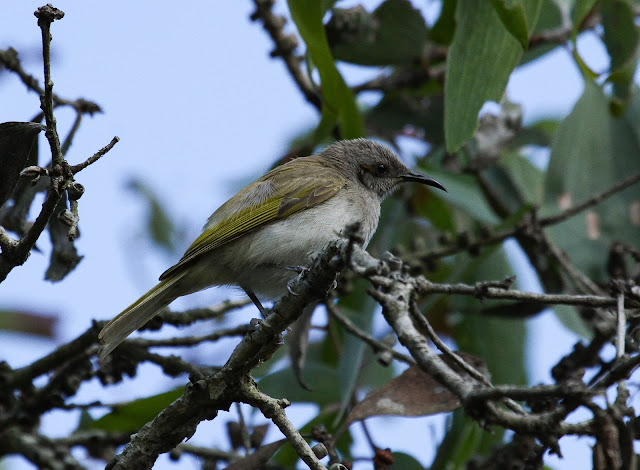 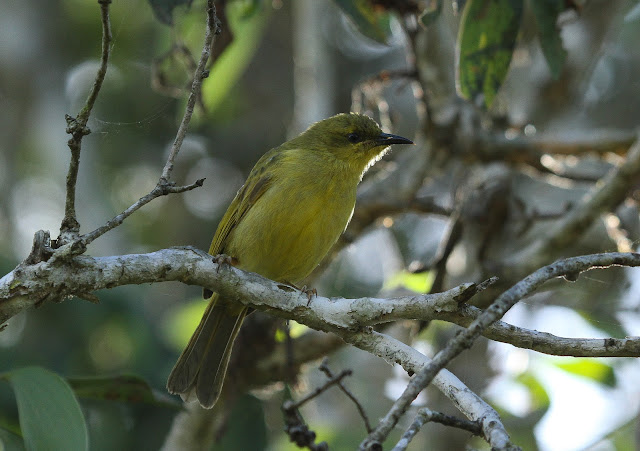 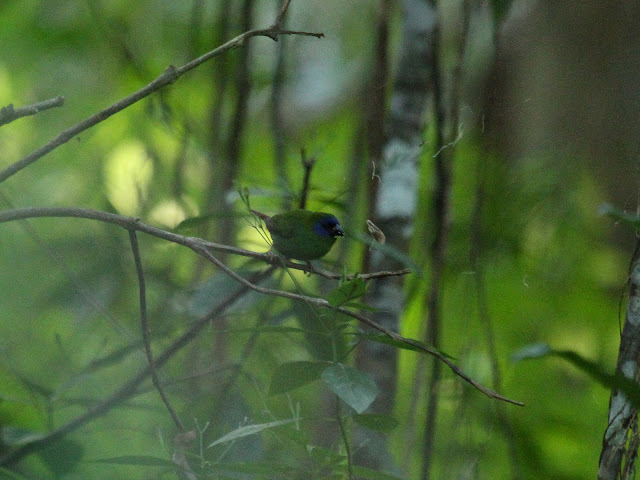 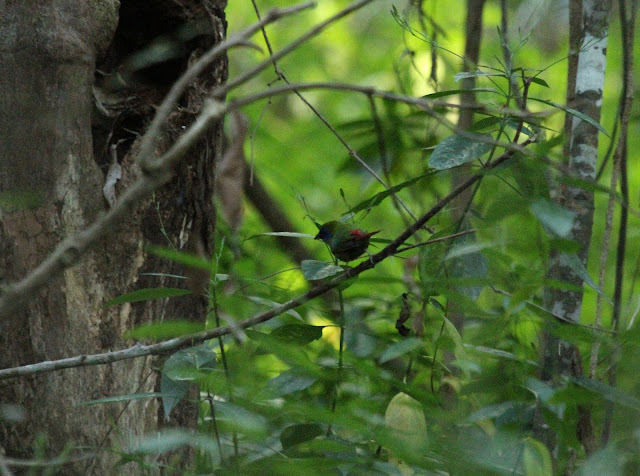 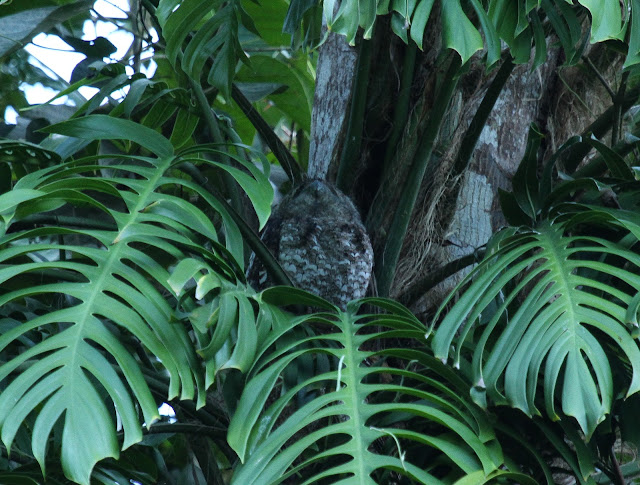 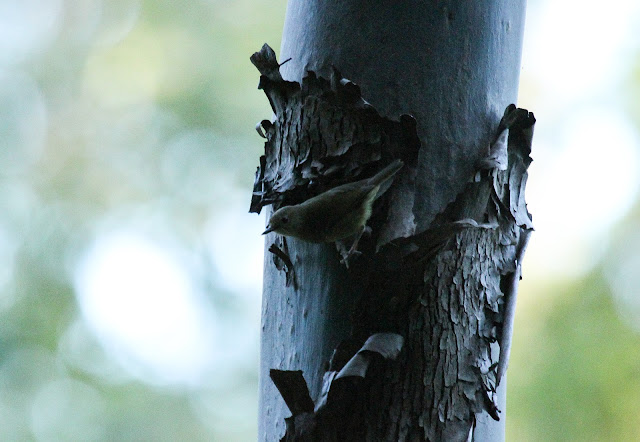