Three weeks today we'll be flying to Cape Town for our month-long adventure. And it can't come soon enough! I've been getting a little jaded with UK birding recently, probably something to do with nothing being about. The orchid season is almost over and August has just the few remaining butterfly and dragonfly species still on the wing.  Most of my objectives for the year are done and dusted. Having made some good inroads this year 2019 will hopefully be the year I complete my UK butterfly and orchid lists. That's the aim at least.

Our SA trip has been long in the planning and despite a couple of 11th hour hitches with accommodations we're now all set to go. I have to say however that the admin at SAN Parks (the South African National Parks authority) is absolutely dreadful. Despite ordering it and paying £200+ in early June we still haven't received our 'Wildcard' which gets us free entry to all the national parks. Several emails have just been met with a variety of excuses! We have booked quite a bit of accommodation with SAN Parks (mainly in Kruger) but despite this it seem impossible to book game drives etc online as it says 'you have to stay at this camp to book this activity', which we are! Grrrr!

Our 'optimised' route around Kruger has been now been sorted which hopefully takes us along the best roads for wildlife. We have 9 days in the park to meander from rest camp to rest camp - Pretoriouskop, Berg-en-Dal, Skukuza, Lower Sabie, Satara and Olifants.

Birdwise, as ever on my foreign trips I don't lose any sleep over specific targets but if I had to name one species I'm quite keen on seeing it's Cape Rockjumper. And there's the small matter of my first ever penguins and albatrosses! 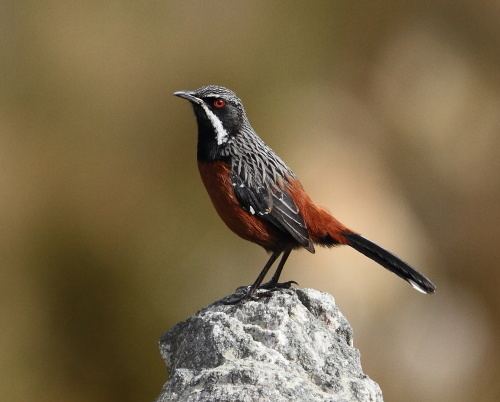