To say it was just a trip to Dorset would be wrong because we did take a detour to a site in Oxfordshire on the way and also ventured into Somerset and even Devon briefly!
We managed to find a good deal in Beaminster on Airbnb in the week and plans were hatched.

Out stop on the way was at the lovely Hartslock reserve near Goring-on-Thames. My target here were the numerous spectacular Lady x Monkey Orchid hybrids and they didn't disappoint with their flamboyance! Just 1 Lady Orchid and 2 Monkey Orchids (the latter just emerging) were nearby. Waking the hillside I also found a small group of Pasqueflowers, loads of Chalk Milkwort plus a single White Helleborine still to flower. Red Kites soared overhead and both Green Hairstreak and Dingy Skipper were also nice additions. We walked back along the Thames to the car in good spirits. 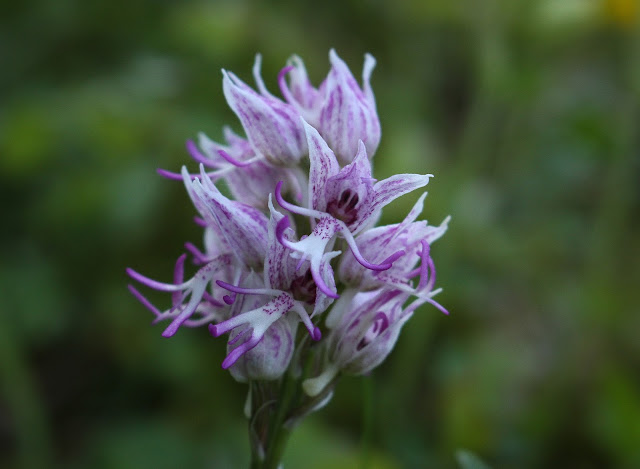 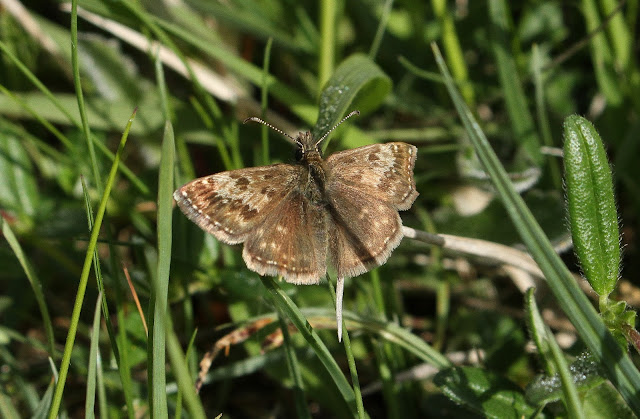 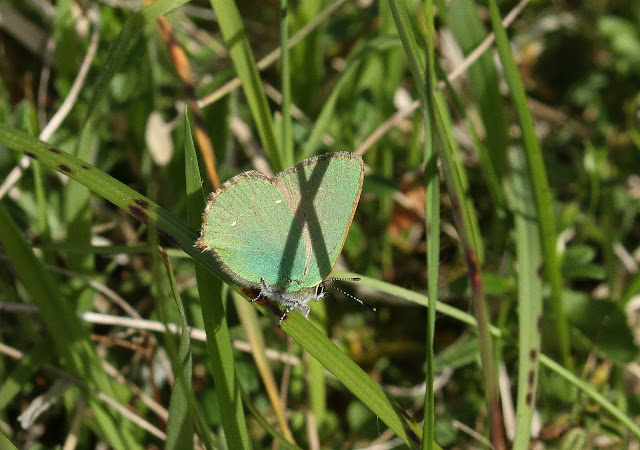 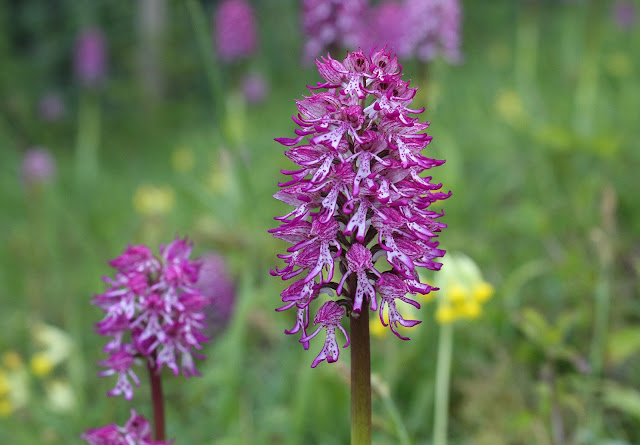 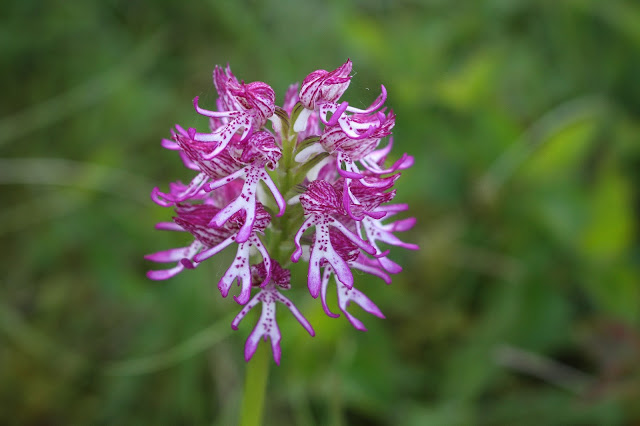 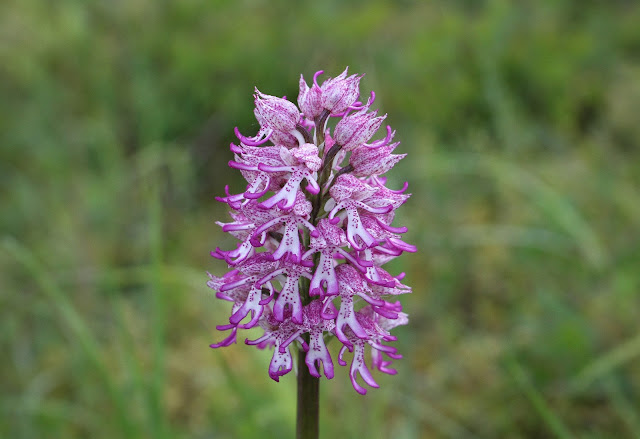 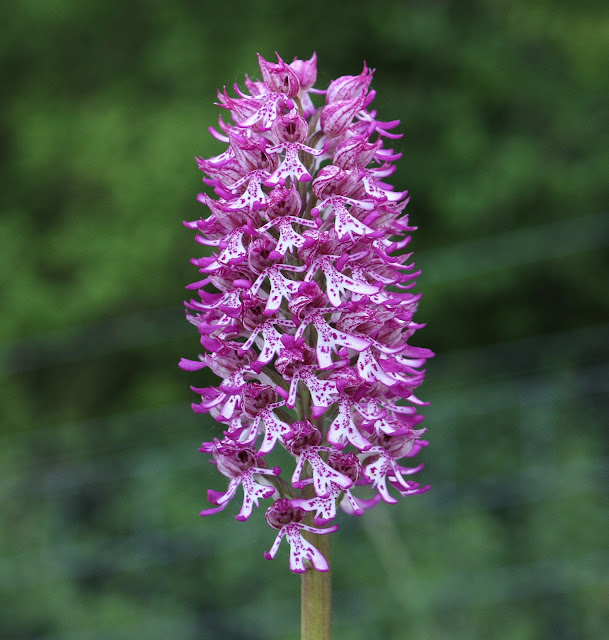 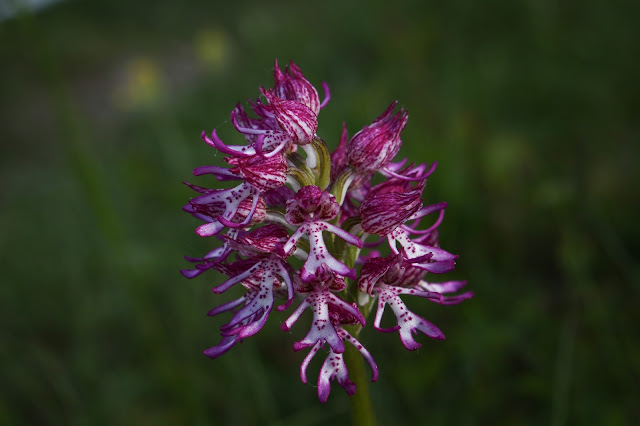 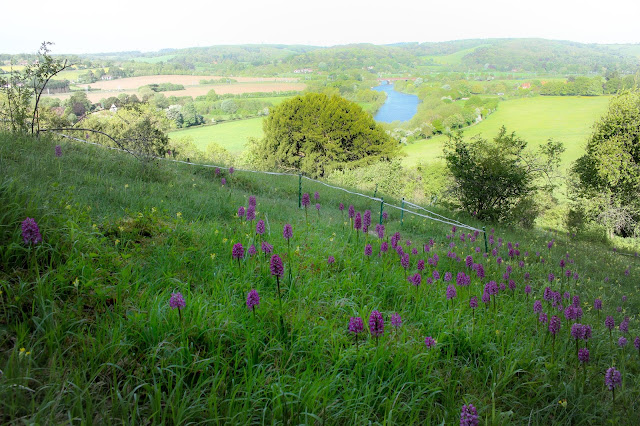 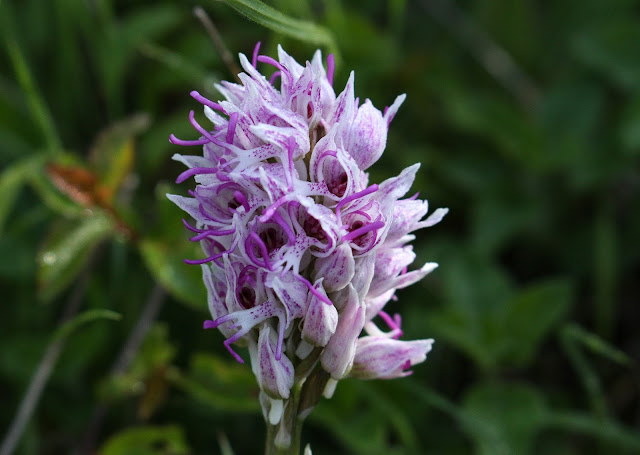 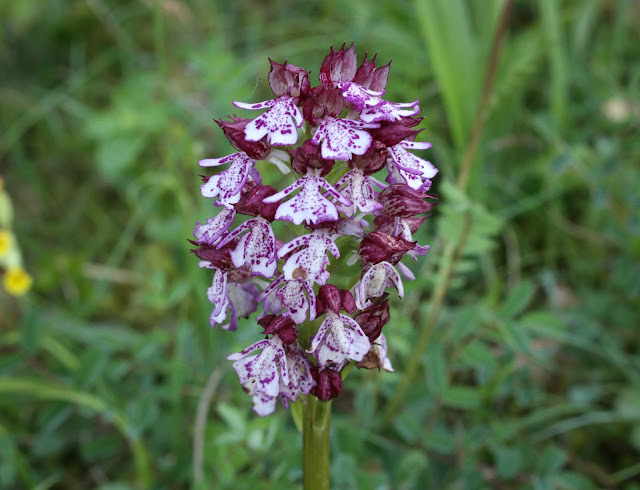 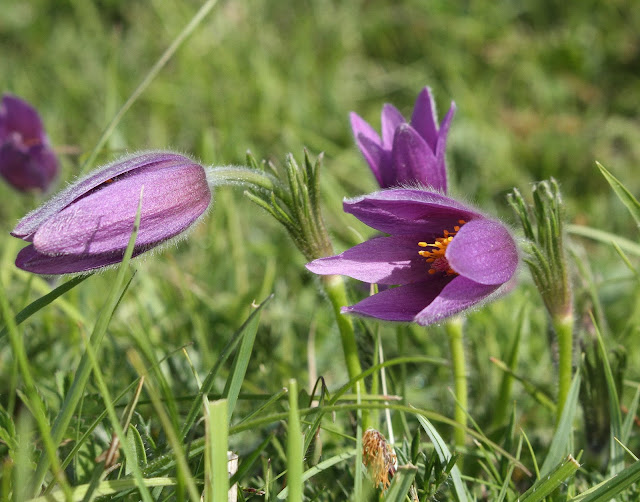 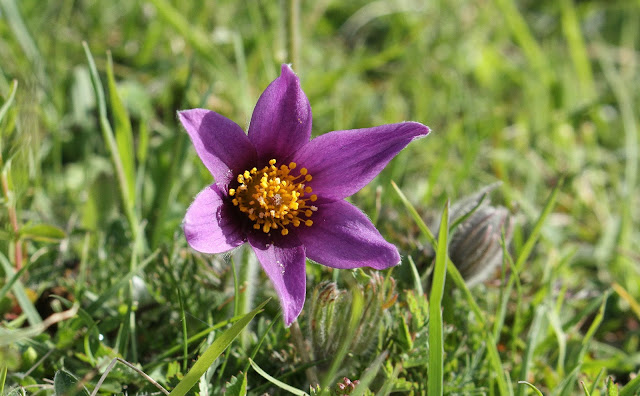 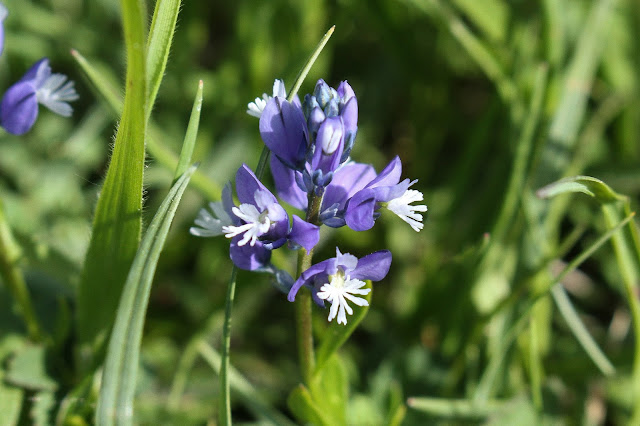 We continued our rather torturous onward journey getting stuck in traffic on the A303 near Stonehenge. This wasn't as bad as it sounds though because a delightful male Montagu's Harrier flew over while we sat stationary! A Yellow Wagtail did similarly a little further on.

My main target for the day was at a roadside spot in West Dorset (which shall remain secret). After much fuss, lots of looking, walking backwards and forwards and phore calls to the ever-helpful Sean Cole I eventually located the 2 Woodcock x Fly Orchid hybrids I was after! And boy there were beauties. I quickly took my shots and re-joined an rather pissed-off Belinda. This was quickly forgotten with tea and cake in Beauminster before checking into our accommodation. 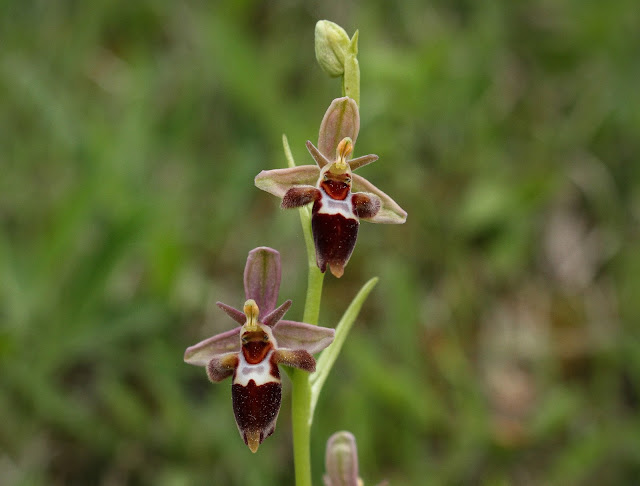 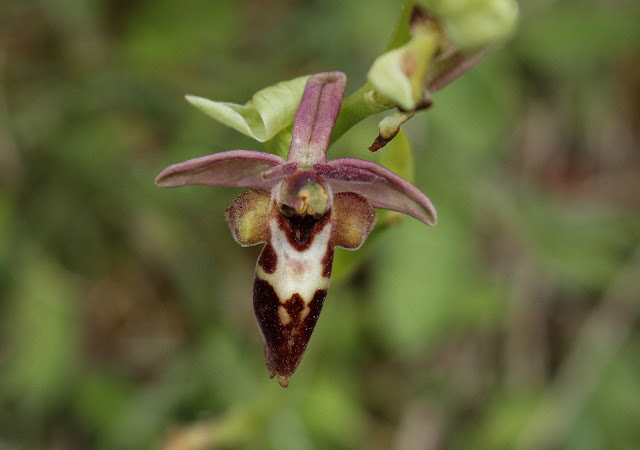 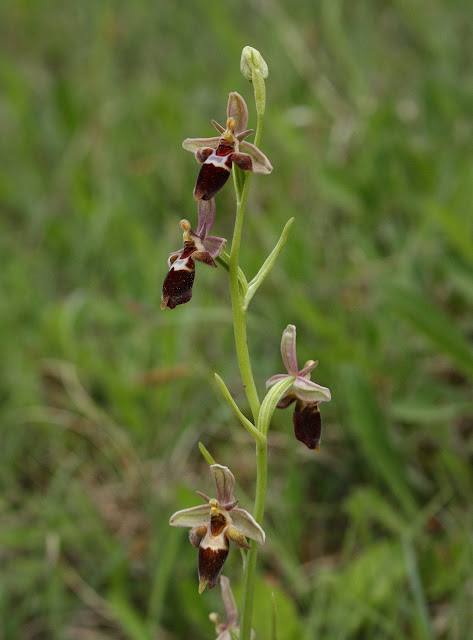 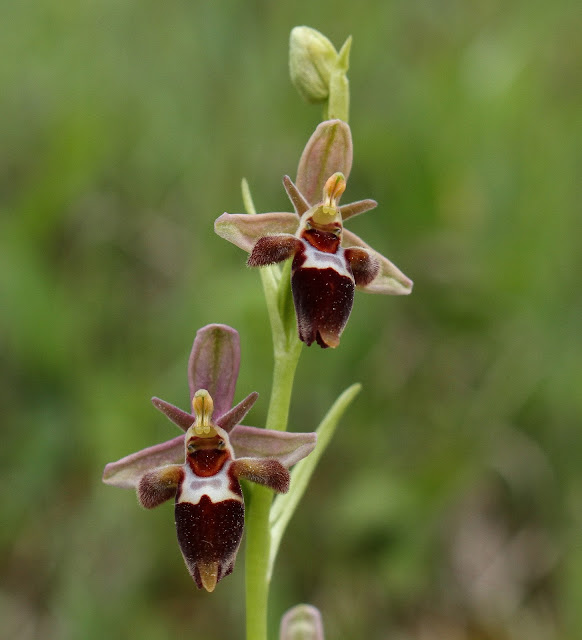 Saturday dawned cloudy but dry. A drive to the north section of the Blackdown Hills near Wellington followed by a nice walk on Blackdown Common revealked Tree Pipit, Cuckoo, loads of Lesser Redpolls and Willow Warblers, 2 Garden Warblers but sadly the weather just wasn't good enough fr my hoped-for Pearl-bordered Fritillaries. Green-veined White and Dingy Skipper did brave the weather though!

The rest of the day was fairly uneventful as far as nature was concerned. A walk from Charmouth to Lyme Regis (with fossils a plenty en-route) and dinner in West Bay.

Sunday was a much sunnier day and we decided to head for the Purbeck coast 'on our way home'. Parking in Worth Matravers we walked the coat eastwards to the famous Dancing Ledge. Here I  quickly found quite a few Early Spider Orchids even though c75% had gone over. There were also some superbly rare Early Gentians and birdwise we were treated to mega close views of a pair of Peregrines as we ate our lunch on the cliffs beside some nice patches of Wild Cabbage. 2-3 Ravens were also about plus Lesser Whitethroat and 2 Shags. A mega Clouded Yellow flew quickly past going west but didn't stop. 3 Walls Browns were also new for the year. 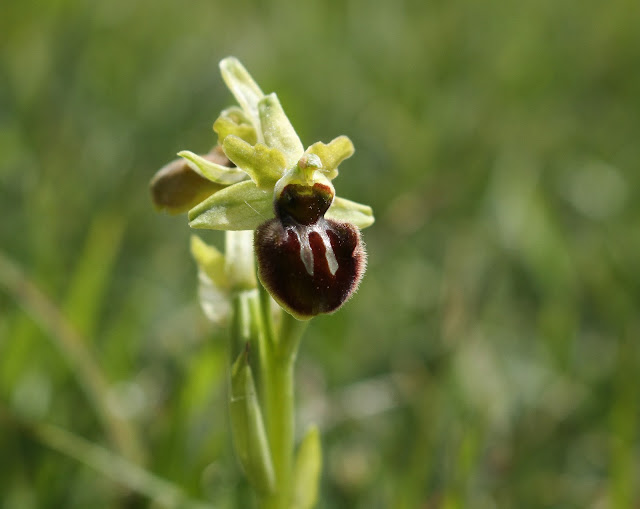 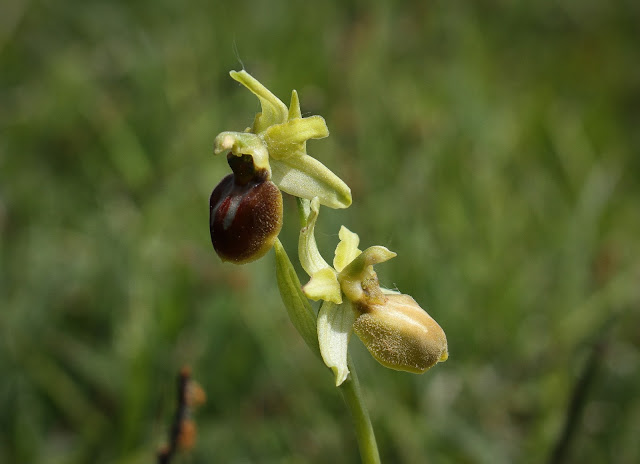 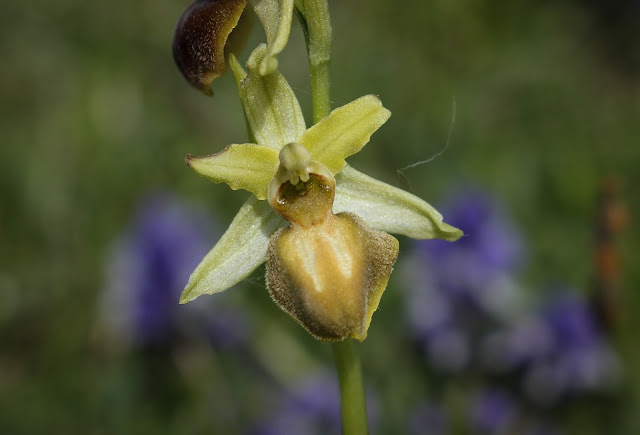 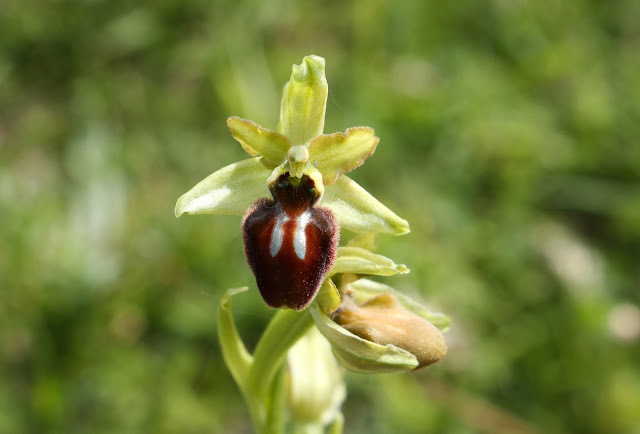 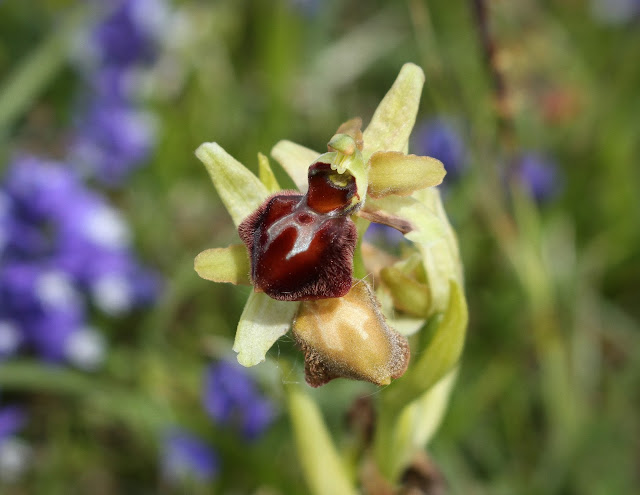 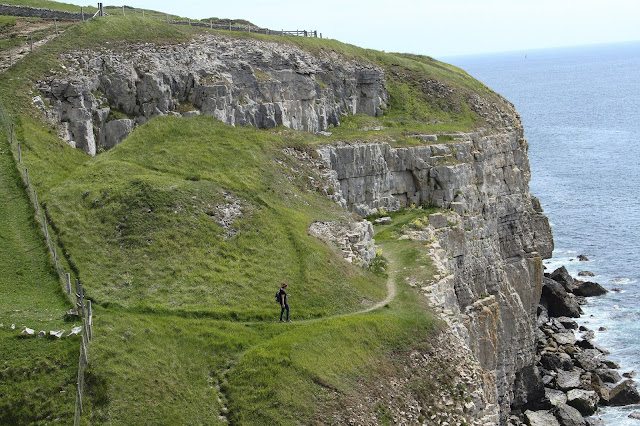 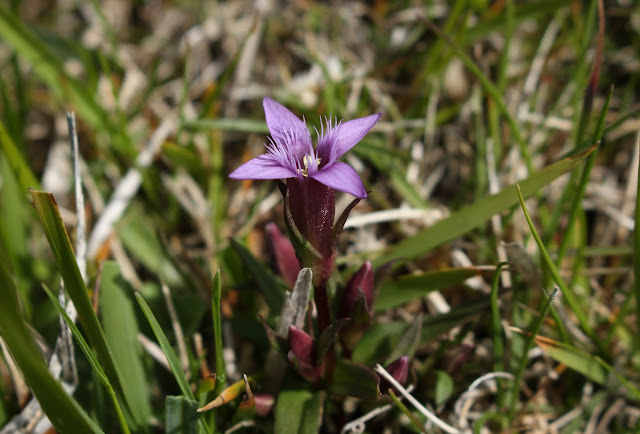 Early Gentian
Posted by Chris at 21:16