We had an all British group comprising Bob Swann, John Boulcott and Bill Bailey for our first winter tour to Kuwait. Arriving at Kuwait International Airport on the morning of 28 January we quickly negotiated all the visa and baggage formalities, met our local guide Pekka Fagel and ventured out for our first birding.

Birding began rather sooner than we anticipated with an extraordinary piece of luck. Literally 2 minutes out of the airport Bob cried 'stop, I think there's a roller on that lamp post'. Squealing to a halt in a convenient lay-by we legged it back down the road to confirm it was indeed a roller - an Indian Roller! Considering there had been no sightings of the species since early December it really was some bird for the first one of the trip.


Indian Roller, Kuwait International Airport
Indian Roller, Kuwait International Airport
A happy car load of birders then proceeded to Green Island (via a quick bag drop at our hotel) in the hope that the team's next target could be located. Sadly it wasn't to be as we failed with Hypocolious which probably had a lot to do with the fact it was the middle of the day. We did manage the resident Red-vented Bulbuls, the ubiquitous White-cheeked Bulbuls, 1 Masked Shrike, 1 Daurian Shrike and Common Sandpiper on the lake before we left the site vowing to return the following morning. 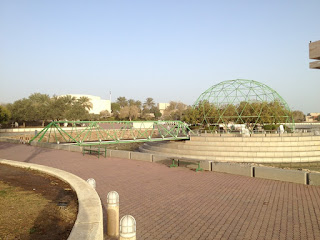 Green Island
Next stop was the wetland reserve of Jahra Pools where a drive around the various reed-fringed pools produced sightings of 2-3 Bluethroats, 3 Graceful Prinias, c40 Spanish Sparrows, our only Turkestan Shrike of the trip, a singing (but not seen) Clamorous Reed Warbler, Marsh Harrier and Tufted Duck whilst Swallows, Pallid Swifts and a couple of House Martins hawked over the water.


Pallid Swift, Jahra Pools
Next came an extended stop at the wader hot spot known at the Manchester Club on the southern edge of Kuwait Bay.﻿ It certainly didn't disappoint. The boys in the group were very keen to get some close views of Crab Plover and they got them here as at least 175 fed along the shoreline. A sleeping Dotterel (a great local bird) was picked up amongst the large numbers of Lesser Sandplovers, Greater Sandplovers, Kentish Plovers and Dunlin. Present in smaller numbers were Terek Sandpipers, Redshank, Curlew and Little Stints with the odd Broad-billed Sandpiper, Greenshank, Whimbrel and Grey Plover. A true wader fest! Also here were several Heuglin's and Slender-billed Gulls, single Armenian and Pallas's Gulls, c8 Caspian Terns, several Gull-billed Terns, 5 Western Reef Herons and the spectacle of 5000+ Greater Flamingoes flying into the bay. Passerines included several Water Pipits and a single Desert Wheatear.
Crab Plovers, Manchester Club
Crab Plovers, Manchester Club 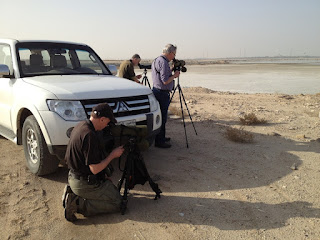 Tour group, Manchester Club
We finished a superb first day with 4 House Crows and a couple of Ring-necked Parakeets at Kuwait University.