Our main aim today was to spend some time at the Sabal-al-Ahmed Nature Reserve (SAANR) but first thing we decided to quickly check the nearby Subriya Farm. This proved rather fruitless with only Robin and Chiffchaff seen so we quicky reverted back to plan.

At the reserve gate we were informed that we were only allowed access for 2 hours due to visiting VIPs. Unfortunately this type of problem continues to be common in Kuwait but at least we did get in! So, it was a quick whip round to try to see the specialities before we had to get out. Firstly we stopped at a pretty unpromising looking piece of desert but our guide knew what he was doing and we quickly had some views of a male Finsch's Wheatear, 6+ Bar-tailed Larks and after a good wander round the vicinity Bob picked up a very welcome Hoopoe Lark. At the Tulha Oasis things were extremely quiet (in contrast to what it's like in spring) and even 2 distant accipters failed to give themselves up. Moving on there were plenty of Desert and Isabelline Wheatears scattered about as we headed to a large open wadi. Scanning the area from above John picked up 2 distant MacQueens Bustards which was a really good scoop. A Greenshank on a small flash in the wadi was less exciting! On the way back out of the reserve I got onto a trackside Asian Desert Warbler that showed nicely when encouraged by a recording and with that we departed the scene. 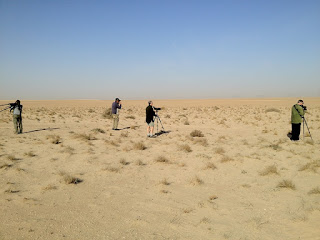 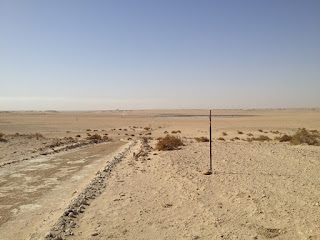 Another look at Jahra Farms followed but we once again failed to connect with a much wanted accipter﻿. The fayre there was pretty much the same as previous visits with Song Thrush, Blackbird, Common Myna, Robin, Ring-necked Parakeet, White-breasted Kingfisher, Daurian Shrike and a coffee and read of the newspapers in McD's being pretty much it!
The rest of the day was spent at the sandy desert site of KABD where we scoured the large area from the vehicle and also on foot. Another male Finsch's Wheatear was by the main track and a few thinly scattered Desert and Isabelline Wheatears were seen but it was hard going. A small cultivated patch produced 1 Short-toed Lark, 4 Skylarks and a few Crested Larks before we called it a day.
Posted by Chris at 09:48