An 06.45 start saw us make the short drive back to Green Island this morning. At first the birding was slow there but after about 30 minutes I got onto the single wintering Hypocolious on the top of one of the buildings and when we'd located a wandering Bob and he'd also got some views we once again had a very satisfied group. This one was a bit of a bogey bird for them as they'd missed it on a spring tour last year. The usual bulbuls were also joined by a few noisy Starlings this morning and the Daurian Shrike was also still present.


Hypocolious, Green Island
Our next port of call was the ever popular Pivot Fields. This large area of watered arable crops never fails to have plenty of birds and is a real magnet for raptors. After a Steppe Grey Shrike close to the entrance we made a stop by the crocodile pool where we had some good views of a Moustached Warbler, White-breasted Kingfisher and a Green Sandpiper we moved out into the main crop areas for a lengthy drive round, birding as we went. Raptors were much in evidence with 4-5 Greater Spotted Eagles (all adults), a superb adult Eastern Imperial Eagle on a pylon and singles of Hen Harrier, Steppe Buzzard and Long-legged Buzzard. Passerines were represented by c5 Desert Wheatears, c8 Isabelline Wheatears, 40+ Water Pipits, 2 Tawny Pipits, Meadow Pipits, many Skylarks and several Crested Larks. Northern Lapwings numbered about 50 with 1 Curlew, 2 Cattle Egrets, several Starlings, 1 Hoopoe and 2 Daurian Shrikes adding to our growing trip list. A stop by the camel enclosure revealed 6 Namaqua Doves.


Eastern Imperial Eagle, Pivot Fields
After leaving Pivot Fields (the site is only accessible in the mornings) we drove south to the coastal resort of Khiran, stopping for a McD's coffee en-route (a habit that was to become a regular one during the rest of the week!). At a rather grim looking shallow wadi full of builders rubbish we soon located our target bird - one of only 2 known Persian Wheatears wintering in the country. A new WP bird for me. This was quickly followed by the other one just across the road in another small wadi, this time shared with a showy Eastern Mourning Wheatear. Isabelline and Desert Wheatears completed the set! 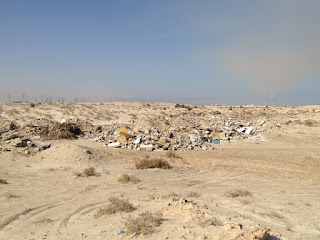 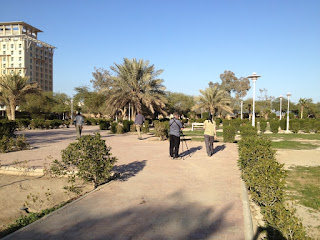