A delayed start this morning actually paid off as we made our way to Jahra Farms once again. Upon arrival we found an accipter sat high up in a tree almost alongside a Kestrel. Before we could get a scope on it properly it flew, mobbing the Kestrel before flying back to its tree but landing mostly out of view. Something about its swooping flight action looked promising but unfortunately we couldn't nail the id. A little while later, after checking all the trees in the vicinity and finding nothing we hadn't already seen on previous visits here I suddenly got onto an accipter flying over the heads of the rest of the group. Luckily Pekka had his camera to hand and snapped some records shots of, at last, a confirmed juvenile Shikra!


Shikra, Jahra Farms (copyright Pekka Fagel)
In very good spirits (naturally!) we went on to add Grey Wagtail to the trip list and had White-breasted Kingfisher, Daurian Shrike, Bluethroat and Ring-necked Parakeet. By the main carpark and mosque we also added Bank Myna to the ever growing list with 12 birds having just returned to the area of their breeding well.
White-breasted Kingfisher, Jahra Farms 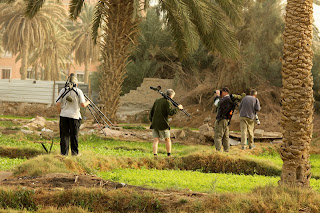 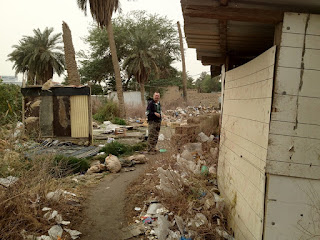 Bob in pristine habitat! Jahra Farms
Grey Wagtail, Jahra Farms
We then got taken to a new site called Mutla'a Ranch, an isolated large area of mature date palms and other trees but despite looking good a thorough flogging of the area produced meagre returns of 2 Song Thrushes, 1 Chiffchaff, Pallid Swift and Sparrowhawk. This site has great migrant potential for the spring though. 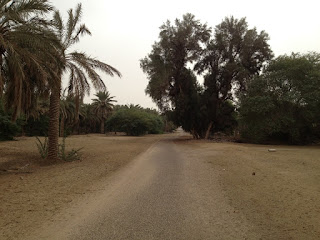 Mutla'a Ranch
Back in Jahra again for afternoon coffee we decided to check the farms at Qasr to which access is now possible. Again, this area is similar to Jahra Farms so has some potential for the future. Today we had Sparrowhawk, European Stonechat, Graceful Prinia, Water and Meadow Pipits and Daurian Shrike. Best however (for local birders especially) was a great find of 2 Woodlarks feeding inconspicuously on a green patch of short crops.


Woodlark, Qasr Farm
Jahra East Outfall was the other spot visited today and in line with some of a recent spring visits it rather disappointed with just Hen Harrier (sadly shot at by local teenagers), 50+ Spanish Sparrows, 2 Chiffchaffs and loads of Greater Flamingoes out in the bay. With nearby large scale building developments encroaching ever closer the future of this site doesn't look very promising.