This was our customary post-Christmas trip away for a few days. For 2018 we chose to stay in an Airbnb property just outside Chew Magna near Chew Valley Lake  because it was handy for visits to Bristol, The Mendips, the coast and Bath. The least said about the place we stayed in the better because it was sub-standard in a number of ways. Luckily it was just a base for our adventures, had wifi and a kitchen so we could self-cater. The down sides being the place was a tip with rubbish and dog shit strewn around the grounds (the owner lived in an adjoining hovel!), a bed that was close to collapsing, no curtains at some of the windows, dirty washing discovered in the bedroom, 1 loo roll for 2 people for 5 days and the 'provided' breakfast being some items left for us to do a diy breakfast but again, nowhere near enough for 5 nights.

Anyway, enough of that, the bits and pieces of birding I managed to squeeze in were rather good! On Boxing Day we were in the area by about 09.30 and did a long walk around Pensford and the Stanton Drew Stone Circles. I managed Raven, Grey Wagtail, Nuthatch and Common Buzzard to add to the Red Kite seen by the M4 on the way down.

A quick look at Chew Valley Lake from Stratford Hide in the late afternoon yielded a nice close Water Pipit along the reedy margin plus Cetti's Warbler, 2 Reed Butnings, 15 Snipe, 2 Goldeneye, c250 Redwings and several Fieldfares plus 2 Goosander in Heron's Green Bay while passing through.

I didn't then do any birding for a couple of days noting just a Grey Wagtail in central Bristol on 28th.

The morning of 29th saw us at Barrow Gurney Reservoir no.1 tank where the fantastic drake Long-tailed Duck showed at c20 meters range from the small carpark. It even displayed a few times to a female Tufted Duck! Heron's Green Bay at Chew Valley had 1 drake Goosander and a Grey Wagtail in an ultra-quick stop. Later that day I persuaded Belinda we needed to finish the day by driving out onto the Somerset Levels. Here I had a false start with 16 Little Egrets in a roadside field near Westhay Moor but a couple of miles further east I hit the jackpot with a field full of 37 Cattle Egrets and c15 Little Egrets. What an amazing sight!

I left Belinda in our accom for an early morning re-visit to Stratford Hide at Chew Valley on 30th. Despite not having very high expectations it proved to be very good indeed. Much scanning was eventually rewarded with the drake Lesser Scaup at distance with numerous Tufted Duck and Pochard plus 4 Black-necked Grebes keeping each other close company. Also seen were 3 Goosander, 1 Goldeneye, 2 Cetti's Warblers, 28 Snipe and a Little Egret. 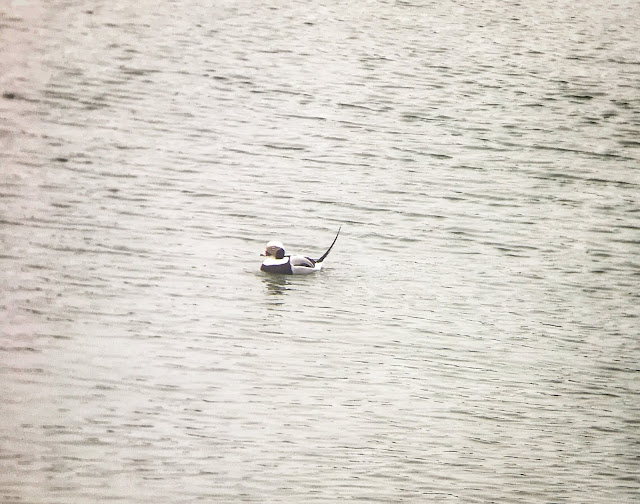 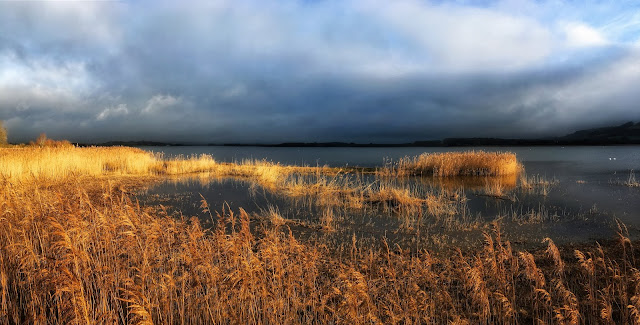 Stormlight at Chew Valley Lake
Posted by Chris at 17:52