Day 3 and another early start. This time we awoke to clear skies which would thankfully be with us for the remainder of the trip.


First up was an early morning drive north towards the Iraq border and the expansive area of farms known collectively as Abdali Farms. Our main target for the morning was to locate the only Afghan (Common) Babblers in the WP. With sightings this year few and far between and the birds seeming to have wandered we weren't too hopeful but all spread out and walked the date palm fields with ears and eyes open. And the tactic worked! A call from the left hand end of the line and within a few minutes a delighted group were ticking off this much sought after bird as we watched 5 adult birds. Soon they moved through a fence and melted away though so we had been very fortunate. Sadly we weren't so lucky with the other target species here, despite much searching of a large area we couldn't find any Red-wattled Lapwings. Other species were few and far between but we did manage Rufous Bush Robin, Graceful Prinias, Isabelline Wheatear, 2 Hoopoes and as we were leaving a female Namaqua Dove on wires by the road. Most noticable was a raptor passage consisting of 9 Booted Eagles (exceptional numbers for Kuwait) consisting of 6 pale, 2 dark and 1 rufous bird, c4 Sparrowhawks, several Kestrels, 1 Lesser Kestrel and then a lovely Long-legged Buzzard as we proceeded to out next site. 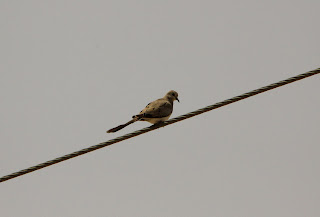 Namaqua Dove, Abdali Farms
On the way back to the Jahra area we called into a site at Maghasil which affords some good views across towards Bubiyan Island. Here we were treated to some nice close views of 3 Swift Terns, 1 Lesser Crested Tern, 4 Little Terns, 5 Western Reef Herons, 8 Curlew and several Yellow Wagtails.
Jahra East Outfall was next on the agenda and boy how this site has changed in the last couple of years. Access is now tricky and involves negotiating a building site as the developers edge closer to the reedbed. Once there we were faced with poor viewing conditions due to a lack of grazing meaning reeds have grown up cloaking the productive stream. We did manage to clock up 2 Blue-cheeked Bee-eaters, Chiffchaffs, 1 Willow Warbler, 1 Water Pipit, 2 Red-throated Pipits and several Yellow Wagtails. Very sadly a sickly Steppe Buzzard on the saltmarsh which was unable to fly had to be put out of its misery. It was time to move on... 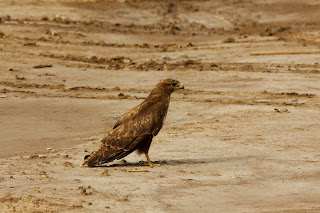 Steppe Buzzard, Jahra East Outfall
To finish the day on an upbeat note we ventured to the nearby Jahra Pools which proved to be the perfect antidote, there we birds everywhere! Greeted by an amazing flock of 35 Purple Herons we moved the cars into position overlooking a flooded creek in the reeds and to the delight of my German passengers were soon feasting our eyes on 1 Baillon's Crake, 5 Little Crakes and 2 Spotted Crakes all within a few meters of each other. Around the other side of the reserve the water levels were good for waders and we had 6 Wood Sandpipers, 2 Marsh Sandpipers, Greenshank, Ruff, Little Stints, c20 Red-necked Phalaropes and c15 Black-winged Stilts together with c5 Garganey, c6 Little Grebes and 2 Grey-headed Swamphens. Passerines were represented by single Reed and Savis Warblers, a male Bluethroat (race magma), 1 Water Pipit and the commoner pipits and wagtails. 3 more Blue-cheeked Bee-eaters, 3 Night Herons, 2 Glossy Ibis and c15 Collared Pratincoles swooping over our heads as dusk fell made sure we finished the day in good spirits before braving the evening traffic chaos on the way back to our hotel! 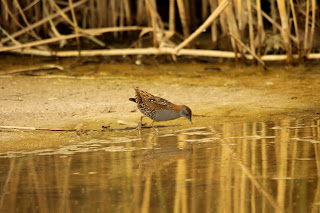 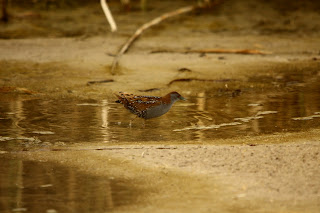 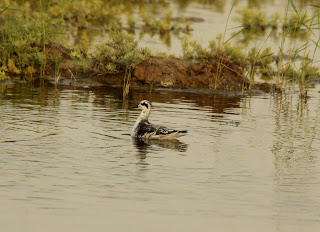 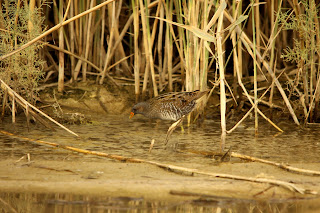 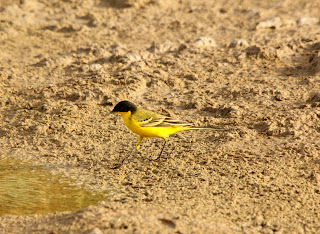