We began day 4 back at JEO where things were a little more lively in the early morning sun. Best was a female Citrine Wagtail along the dyke but we also added 6 Bluethroats (of 3 different races!), Cetti's Warbler, Clamorous Reed Warbler, Sedge Warbler, Reed Warbler, 3 Spotted Crakes, 6 Lesser Kestrels passing through, Steppe Grey Shrike and a 'maura' Siberian Stonechat. 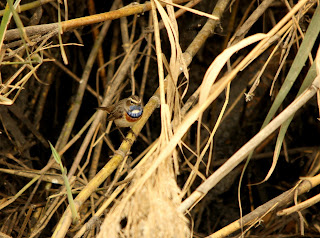 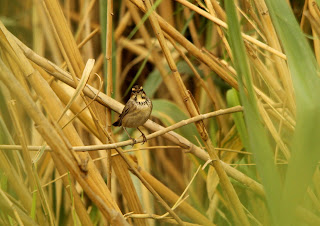 Bluethroat, Jahra East Outfall
It was a return visit to Pivot Fields next as this site only allows visits in the mornings. Upon arrival we bumped into Brian Foster and his visiting mate Andy and while chatting a splendid male Rock Thrush popped up on a pylon. We then went on to enjoy a bit of a raptor fest with a Greater Spotted Eagle perched on a distant pivot and 3 or 4 each of Pallid and Montagu's Harriers, a single Hen Harrier, 2 Black Kites, 3-4 Steppe Buzzards and when driving round the site a little later an Eastern Imperial Eagle and several Lesser Kestrels. The latter obviously on the move through Kuwait. Back at the pond a Wryneck popped out onto the ground whilst Great Reed Warbler, Spanish Sparrow, 2 Little Crakes, 7 Glossy Ibis, 6 Night Herons, a Little Bittern, 5 Squacco Herons, several Cattle Egrets, Little Egret and the Pygmy Cormorants were all seen. On a slow drive around the site we clocked up 1 White-throated Robin, 3 Hoopoes, a Bluethroat, Rufous Bush Robin, loads of Crested Larks, Tawny Pipits, Pied and Northern Wheatears. A flock of 45 Collared Pratincoles on an open area of dry ground allowed us to drive the car really close for some photographs! 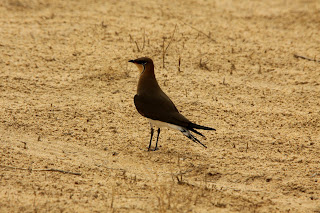 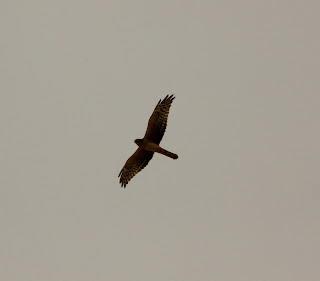 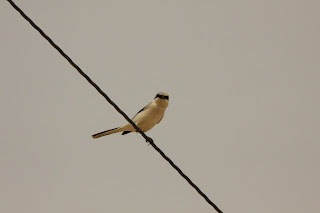 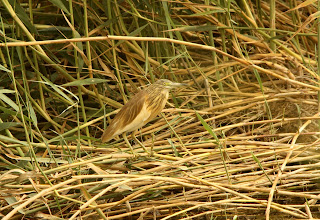 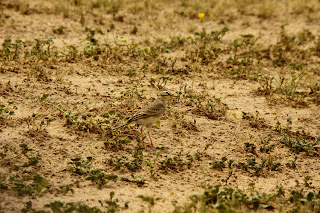 Tawny Pipit, Pivot Fields
As we'd arranged another stab at Zour Port later in the afternoon we started to make our way south and made a brief stop at Fahaheel once more. This time we were greeted by a pathetic excuse for a security guard who tried to prevent us entering the public shopping mall because we were carrying cameras, scopes etc. Despite much discussion he wouldn't budge so we simply walked around to another entrance and strolled in! And it proved to be well worth it because perched on the same rig as we had Swift Tern last time round were 2 marvellous adult White-cheeked Terns. c15 Lesser Crested Terns, 2 Sandwich Terns and an Arctic Skua completed the picture before we grabbed a quick coffee and made sure we passed the security guard on the way out. His face was a picture! 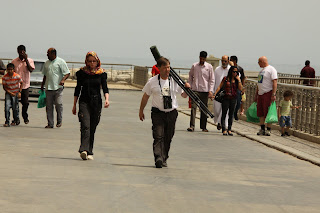 Reija and Jouko, ejected from a shopping mall!
Upon arrival at Zour Port we were once again met by Austin and started with a slow drive and walk around some spots within the complex in search of migrants. This paid off with a great find of a male Cinereous Bunting (race semenowi) alongside an Ortolan on waste ground at out first stop. c5 Blue-cheeked Bee-eaters, c20 European Bee-eaters, Red-backed Shrike, Woodchat Shrike, Turkestan Shrike and 2 Pale Rock Sparrows were also picked up before we headed to the coastal strip. Once we were at the point a pale cormorant flew past us very close inshore and Ernst called it as a Socotra Cormorant. Despite not looking right it then ditched onto the sea  about 100 meters offshore and with prolonged views we all agreed it was indeed a juvenile Socotra Cormorant. Nice one Ernst! Later on we went on to see 3 more of this much wanted WP species flying together offshore. 4 Night Herons headed high north and this time terns were much more in evidence, at least 50 Bridled Terns gradually streamed past north in a steady flow , another White-cheeked Tern and several Sandwich Terns were amongst the numerous Slender-billed Gulls. What a difference 2 days makes! To round off the day we drove round again in search of Desert Finches but to no avail. Instead we managed Terek Sandpiper, Marsh Sandpiper and 2 Red-necked Phalaropes on pools by the golf course. 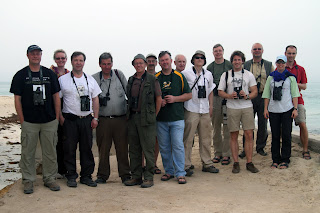