With migration conditions looking good we headed out west to Al Abraq once again. En-route numerous shrikes in roadside bushes hinted of things being on the move. A flock of 18 Grey Hypocolious was a great sight on the edge of the desert whilst other migrants included a Blue-cheeked Bee-eater, 1 'magna' Bluethroat, 2 Rufous Bush Robins, 1 Masked and 2 Woodchat Shrikes, c4 Redstarts (incl 1 samamisicus), Grey and Yellow Wagtails, Water, Tree and Red-throated Pipits and our only Spotted Flycatcher of the tour. Chiffchaffs were exceptionally numerous and included several Willow Warblers, a single Eastern Olivaceous Warbler and another good candidate for Mountain Chiffchaff which unfortunately didn't show well enough to be nailed. 24 Squacco Herons circled overhead every now and again and up to 3 Sparrowhawks had us checking carefully for Shikra. 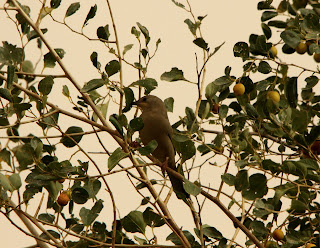 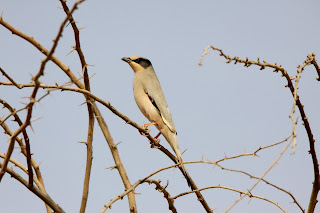 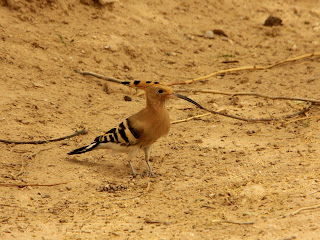 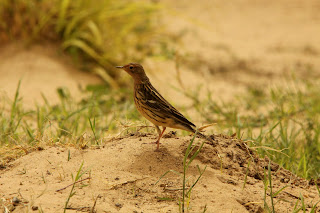 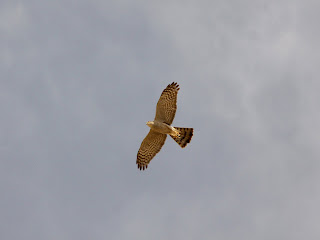 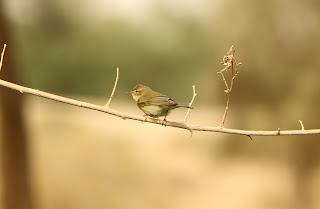 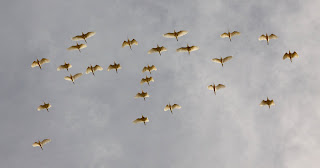 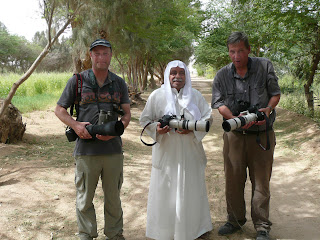 At Albraq (copyright Reija Heinonen)
After the long drive back we decided to call in at Doha Spit on the west side of Kuwait Bay. This was a new site to our tour participants and for the wader enthusiast is very entertaining indeed. The variety and number of waders here is always impressive but today the place really excelled itself. Well over 1000 Lesser Sandplovers harboured c50 Greater Sandplovers with smaller numbers of Kentish and Grey Plovers. Dunlin, Turnstone and Little Stints were also numerous and with diligent scanning several Whimbrel and Curlew Sandpipers, c5 Sanderling and c6 Broad-billed Sandpipers were picked out. Very impressive to European birders were the numerous Terek Sandpipers which are always impressive. Greater Flamingoes, c30 Caspian Terns and singles of Caspian Gull, Western Reef Heron and Osprey were also very welcome. Passerines are never numerous here due to the habitat but 2 lovely Asian Desert Warblers were watched well after being found by Henrik as well as 2+ Desert Wheatears. 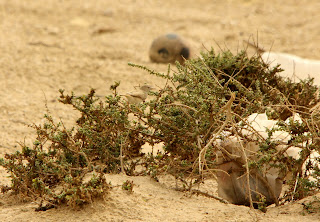 Asian Desert Warbler, Doha Spit
As a fitting end to the day we opted once again for Jahra Pools. Water levels were up on our previous visit but despite fewer waders there was still plenty to keep us all amused until sundown. All 3 crakes again plus 3 Glossy Ibis, both Marsh and Montagu's Harrier, 1 Marsh Sandpiper amongst several Wood Sandpipers and our only Red-rumped Swallows of the week picked out from the numerous Sand Martins. 2 Ortolans showed very nicely by the path whilst a Sedge Warbler showed followed by a singing Moustached Warbler that didn't! A surprise Grey Hypocolious was picked out in the reeds and both Daurian and Turkestan Shrikes, Garganey and Little Grebes completed the list. 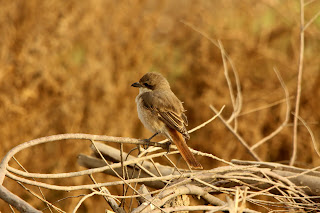 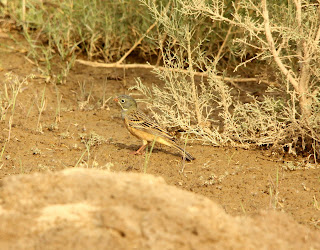 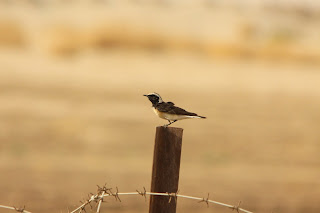 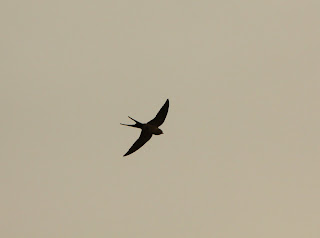