Our final day - sob!
Having arranged and paid the hotel for a late check-out we were able to get out again today knowing that we could return for a shower etc before the long journey home.
After a dashed breakfast at the hotel we grabbed a taxi to the nearby Arpora Woods and agreed to be picked up 2 hours later. This proved to be just about the right amount of time to cover this nice piece of open woodland and adjacent open clearings. A walk down to the dry stream bed and open area beyond initially revealed just loads of Red-whiskered Bulbuls but pretty soon we also had c6 Asian Koel, c5 Little Green Bee-eaters, Ashy Woodswallow, good numbers of White-rupmed Munias and an Indian Golden Oriole. 2 Paddyfield Pipits allowed close approach on the short cropped grass and then our main target bird - a pair of White-bellied Drongos flew into a large tree and showed very nicely. 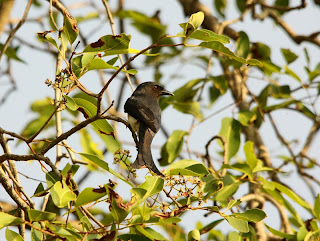 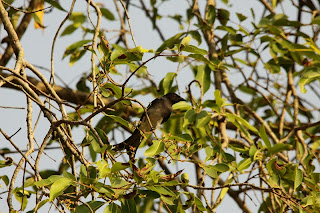 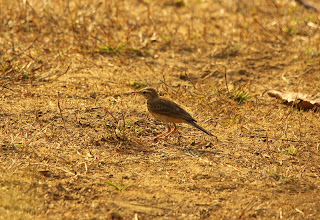 Paddyfield Pipit
Returning to the main path Plum-headed Parakeets were very evident with several fly-overs, a Chestnut-headed Bee-eaters perched up and a White-bellied Sea Eagle flew over heading towards the coast. We also had 20+ Rose-coloured Starlings before some calling prinias caught my attention. After a while they were nailed as 5+ Ashy Prinias. A little further on a stroke of luck resulted in a lovely Black-hooded Oriole perched in overhanging branches over the path but is moved on all too quickly.
Back towards the entrance we walked down to the dry streambed again and in a final 20 minutes scored with loads more Red-whiskered Bulbuls, 2 Red-vented Bulbuls, Orange-headed Thrush, Loten's Sunbird and the final new bird of the trip - a long overdue pair of Coppersmith Barbets.  Just before we left a Shikra flew into a tree above our heads with a lizard it had caught and posed for photographs. One of 3 seen this morning. 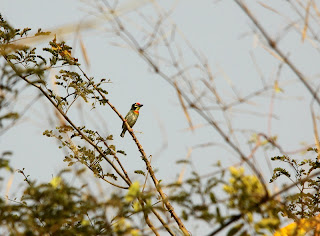 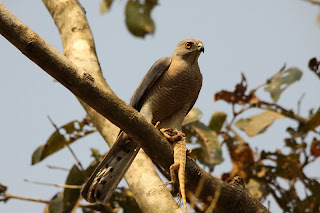 Shikra
The remainder of the day was spent in Baga, chilling and getting ready for the journey home. Still, I did manage Ashy Drongo, Long-tailed Shrike, Indian Roller, Black-shouldered Kite, Marsh Harrier and Green Sandpiper. We decided on a final stroll on the low path at the seaward end of Baga Hill in the later afternoon which yielded 2 Western Reef Herons, Striated Heron, loads of Red-rumped Swallows, White-beiiled Sea Eagle, Common Tailorbird, Jungle Myna, Oriental Magpie Robin and Purple-rumped Sunbird. Baga Fields held both Stonechat and Pied Stonechat and then, as the sun set on a fantastic trip the Cinnamon Bittern showed once more at the Biera Mar. 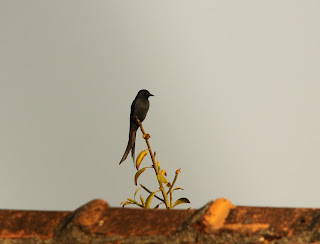 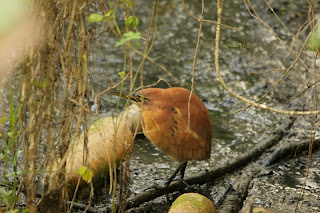