Feeling a little more lively this morning we opted for a non-birding morning trip to Old Goa followed by a birding trip to Carambolim Lake immediately afterwards. This was the first time we used Santosh who is a taxi driver/bird guide based just outside the Biera Mar. From then on we used him several times and he can be highly recommended. His fares are reasonable, he knows where the birds are and he's also a pretty safe driver which is more than can be said for most of the other taxi drivers we encountered!

On the way to Old Goa we had our only Asian Openbill Stork of the whole trip, together with 2 Black-headed Ibis and a circling roadside Oriental Honey Buzzard which I stopped to photograph. 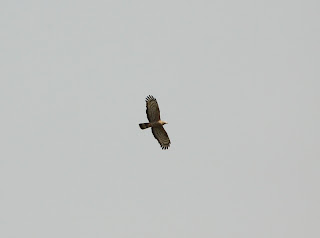 Oriental Honey Buzzard
Old Goa itself was pretty much birdless apart from good numbers of Red-rumped Swallows and a Grey Wagtail so it was great to get to Carambolim Lake afterwards which was crammed with birds. Cormorants were numerous with several Little Cormorants and a roost of 30+ Indian Cormorants, also numerous were Purple Swamphens and Lesser Whistling Ducks. Scanned the wildfowl soon revealed a pair of Cotton Pygmy Geese and amongst the 20+ Bronze-winged Jacana was a single Pheasant-tailed Jacaca. Asian Darter was also added to the list whilst herons were represented by Purple Heron, Grey Heron, Cattle Egret and numerous Indian Pond Herons. Moving to the NE corner of the lakeproduced many more of the same species plus 2 Richards Pipits, Yellow Wagtail (thunbergi), Wood Sandpiper, Stonechat and Hoopoe. Deciding walk back south to the road  to along the eastern edge of the lake proved a good choice with Baya Weaver and White-browed Bulbul being added plus some good photographic opportunities. 2 Pied Kingfishers, Common Kingfisher, White-throated Kingfisher, c5 Whiskered Terns and several Wire-tailed Swallows completed the scoring. 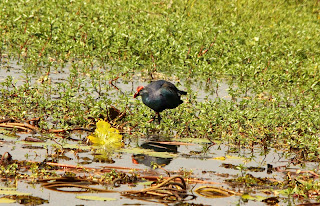 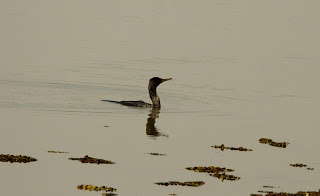 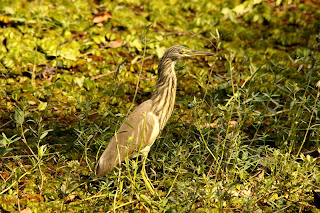 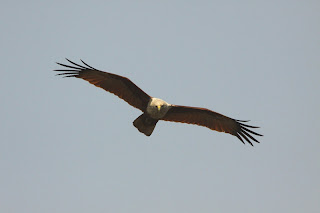 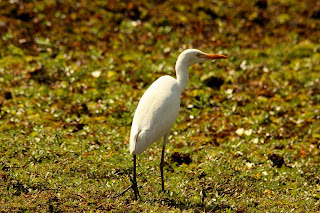 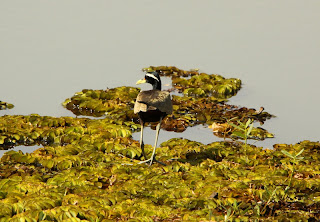 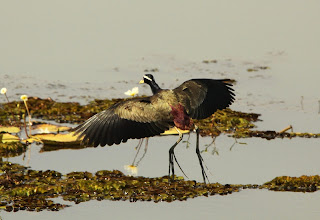 Bronze-winged Jacana
On the drive back to the coast we stopped ror some close views of 6 Wooly-necked Storks and then a White-eyed Buzzard on roadside wires. 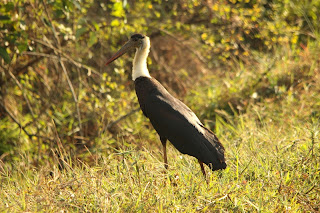 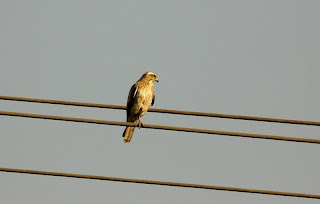 White-eyed Buzzard
Back at Baga in the late afternoon/evening an Alexandrine Parakeet flew over the hotel pool, the Cinnamon Bittern showed again and we were treated to some performing Common Tailorbirds and White-rumped Munias just over the wall. A scan of the usual wires revealed Scaly-breatsed Munia, Indian Silverbill and Black-shouldered Kite while a Marsh Harrier quartered the marsh. 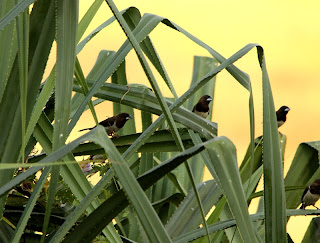 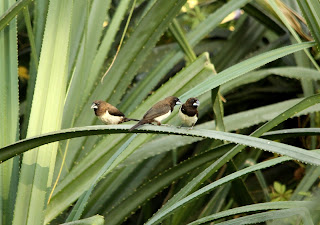 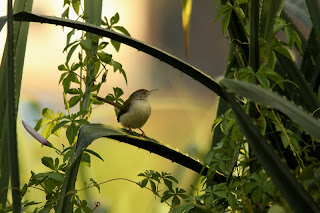 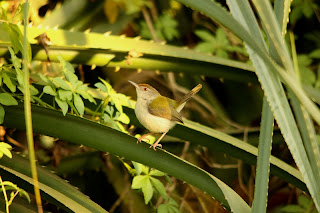 Common Tailorbird
Posted by Chris at 12:40