Picking up the same jeep and driver as yesterday we bounced our way up another very bad track to a 'village' which actually consisted of 2 houses. Arriving in the first birdable light of the morning our final endemic fell within minutes as 2 Sri Lanka Blue Magpies appeared in tall trees and then down in one of the gardens. We'd achieved a full house of 34 out of 34 and the pressure was off!  A couple of Ashy-headed Laughthrushes and saveral Orange-billed Babblers were also feeding on the lawn.

We then spent a good three hours around the house opposite as it rained on and off. The owners didn't mind the invasion as we birded from under their eaves and even through their windows to keep dry. We had our packed breakfast in their house and they even brought out tea and jaggery (the latter a sweet treacle tasting confectionery). The whole spot was very birdy and we busied ourselves photographing verious species albeit in pretty awful light. From my point of view I was grateful for a 2nd chance to photograph Sri Lanka Spurfowl as a pair appeared. Indian Blue Robin, Spot-winged Thrush and a gorgeous Yellow-striped Mouse Deer were also seen in the same clearing in the trees at the rear of the house. A pair of Sri Lanka Scimitar Babblers showed well in the garden and up to 6 Ashy-headed Laughingthrushes visited to feed. In the same small area we also had Green-billed Coucal, Sri Lanka Crested Drongo, White-bellied Drongo, Yellow-browed Bulbul, Black Bulbul, Brown-breasted Flycatcher, Sri Lanka Grey Hornbills, Sri Lanka Green Pigeons, Orange-breasted Green Pigeons, Emerald Dove, Green Imperial Pigeon, Red-backed Flameback and another new mammal - Layard's Squirrel.

Another stop as we decsended gave us Plum-headed Parakeet, Layards Parakeets and Black-headed Cuckooshrike.

By the carpark at the rainforest entrance c6 Sri Lanka Blue Magpies gave us the opportunity to get some pics in reasonable light. 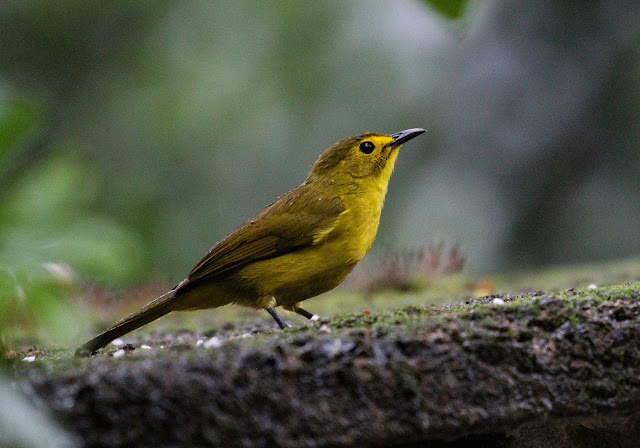 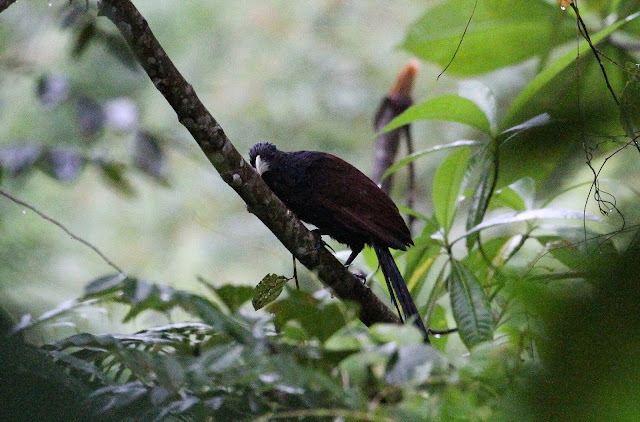 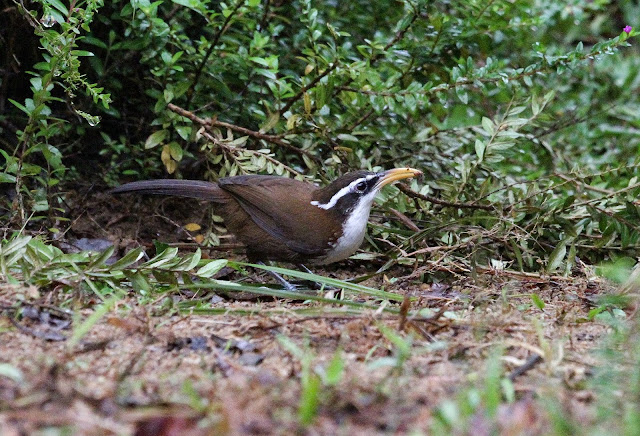 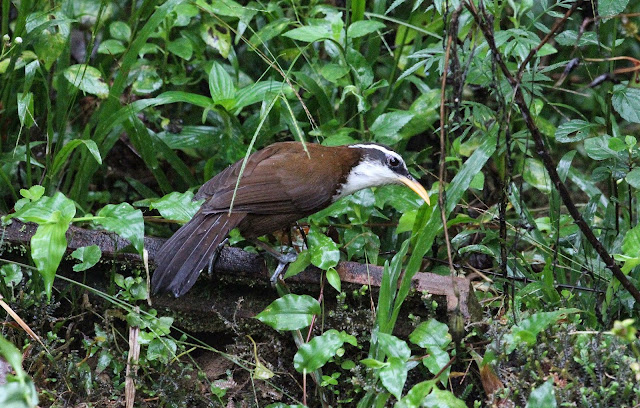 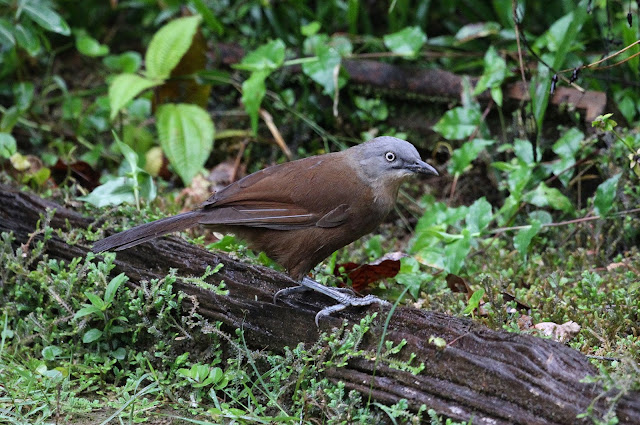 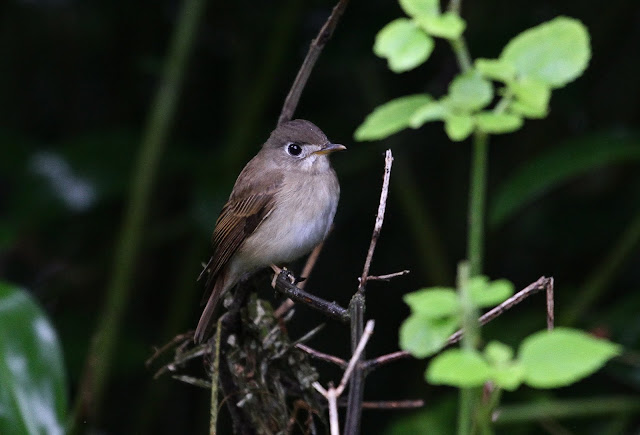 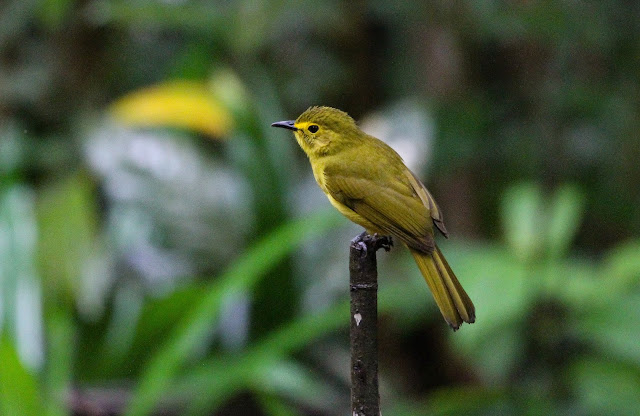 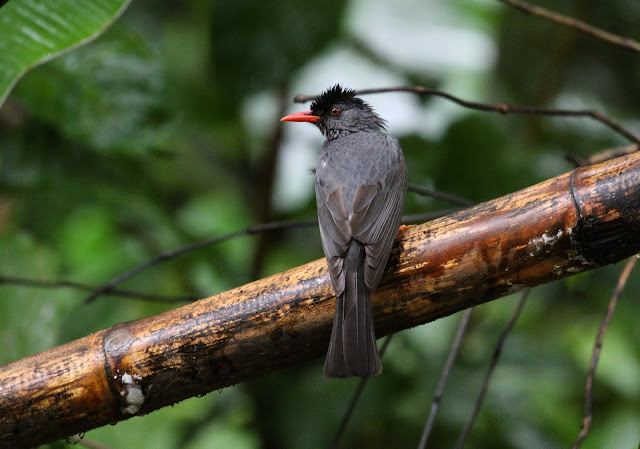 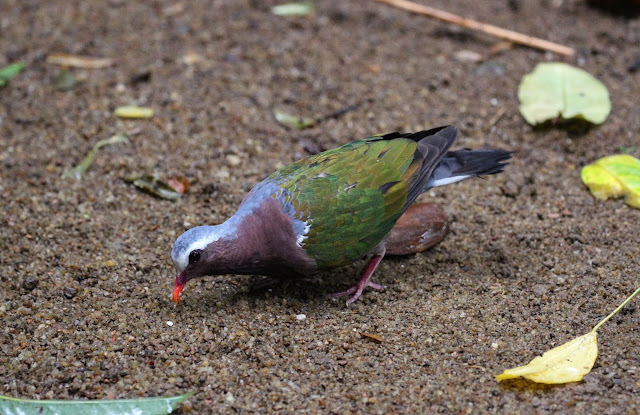 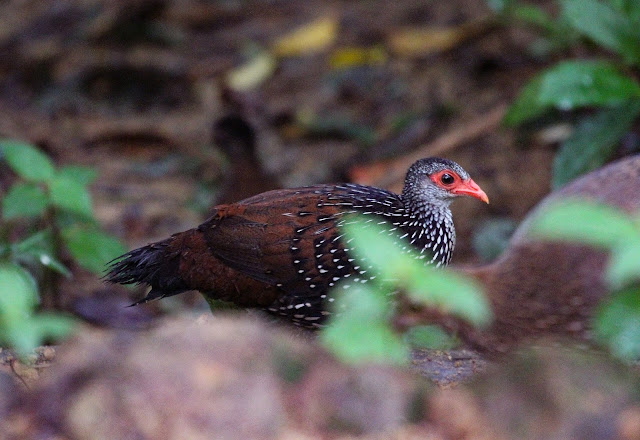 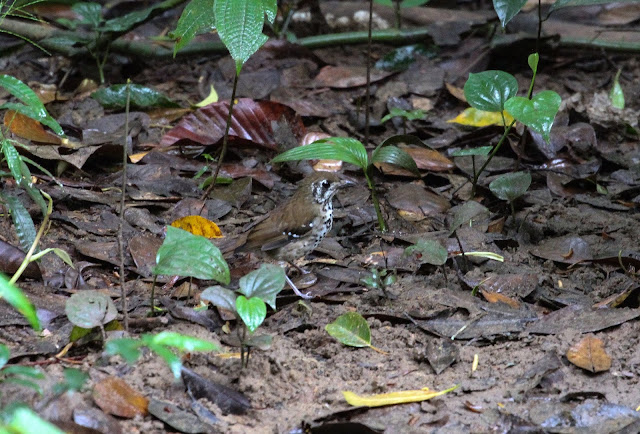 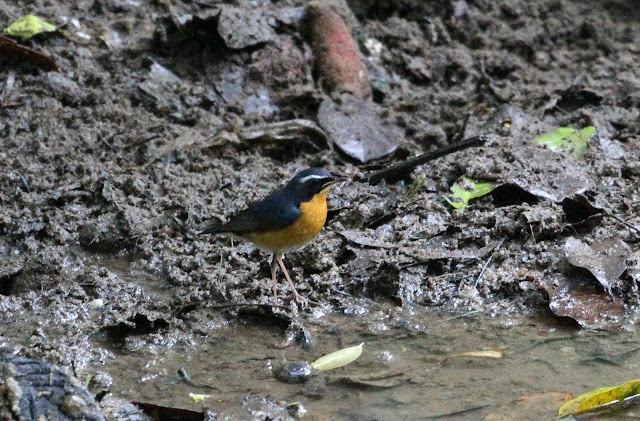 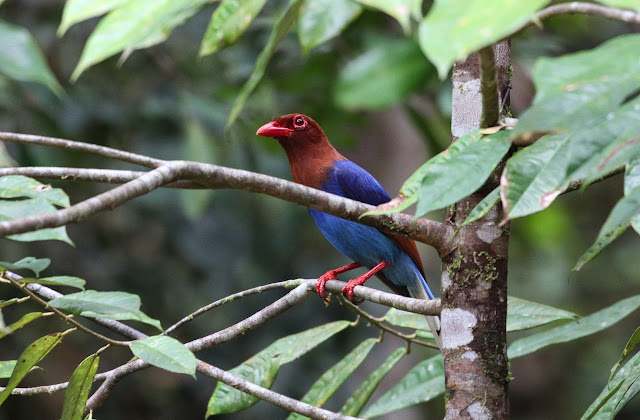 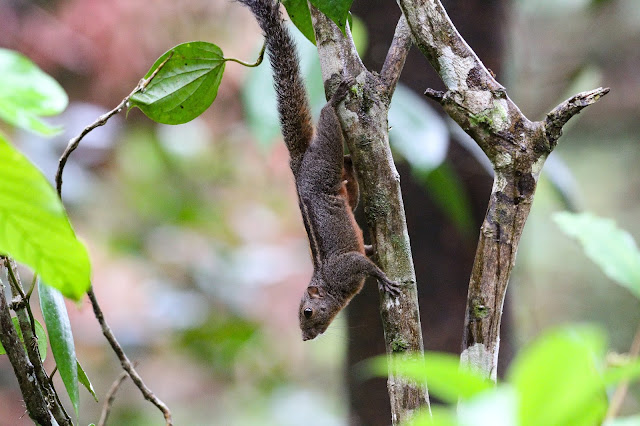 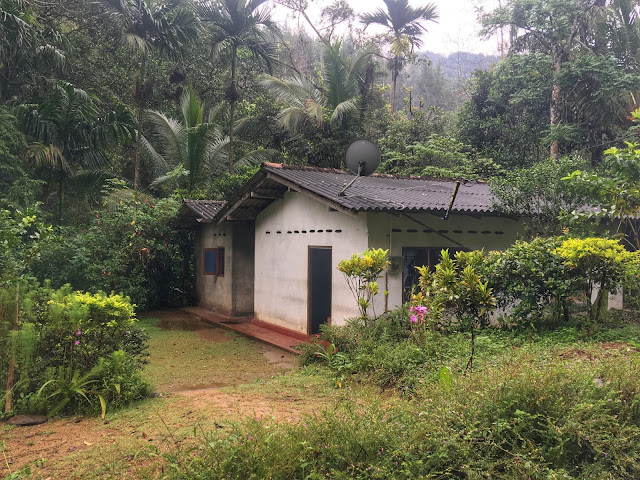 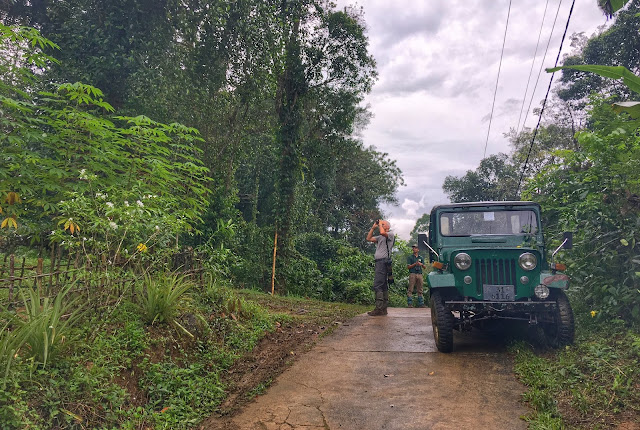 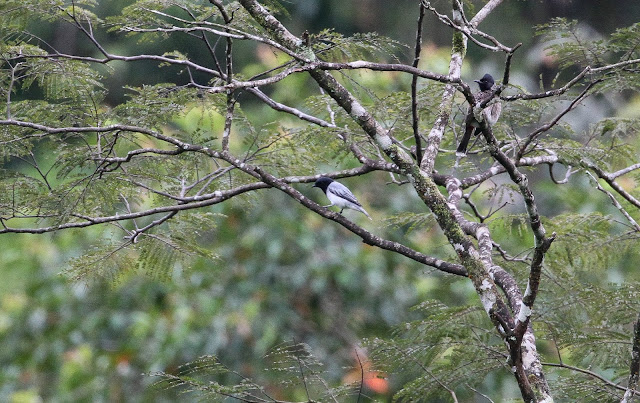 
We then retired to the Rock View Motel for a while as we were in for a late night. During a chilled few hours I managed to get some nice shots of bird around the motel such as Loten's Sunbird and Yellow-fronted Barbet as well as seeing Greater Coucal, Indian Swiflet, White-browed Bulbul, 4 Orange Minivets, Bar-winged Flycatcher Shrike and Shikra. 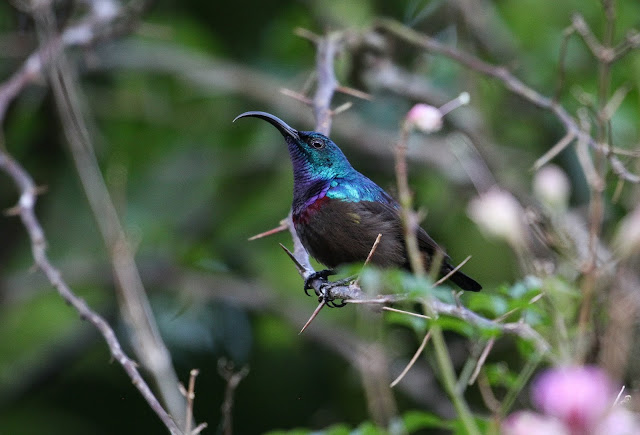 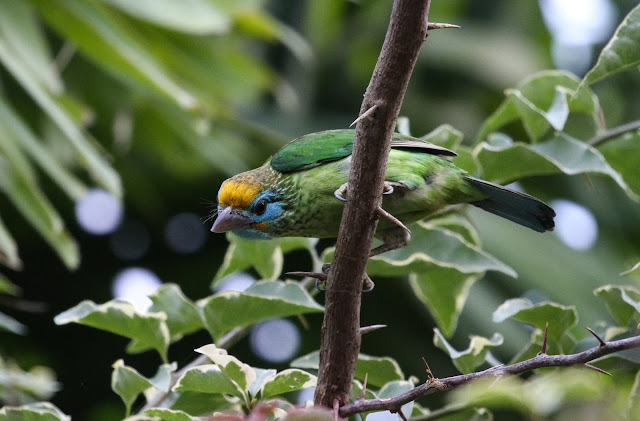 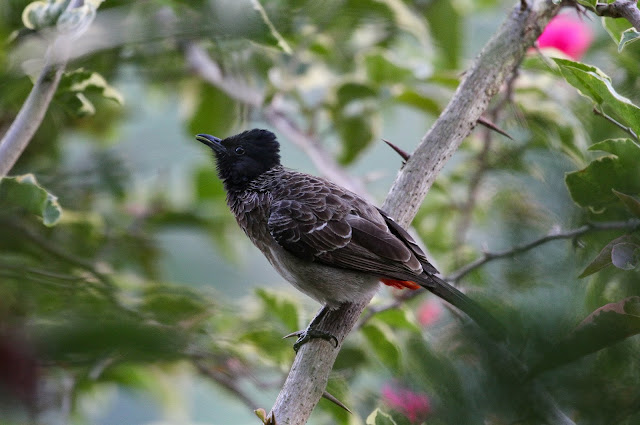 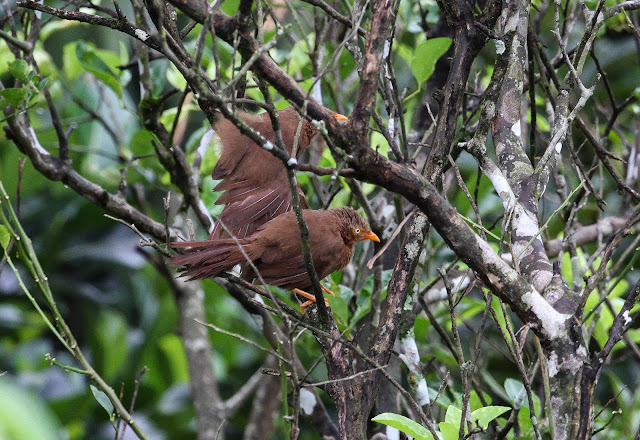 Our late night vigil was beside a busy road and hours drive away to the west. We failed with our quarry of Sri Lanka Bay Owl but did hear it call a couple of times. The Fireflies here did put on a good show through!
Posted by Chris at 10:27