A largely grey Sunday but the sun did come out right at the end of our 10km walk around these 2 heaths. Parking at Buxton Heath we walked north in an anti-clockwise loop along a mixture of heath and mixed woodland paths and tracks.

Examination of some pony dung on Buxton Heath revealed plenty of Nail Fungus, a couple of Dung Roundheads and some Green Elfcup with a single male Stonechat eyeing proceedings. Great Wood to the north had some impressive Western Hemlock trees, a welcome area of greenery on such a grey day. I also managed to id the pixie-cup lichen Cladonia humilis plus another lichen Parmelia sulcata before we crossed the road and entered Marsham Heath. At Deadman's Hill we stopped for lunch and nearby had a nice patch of Purplepore Bracket growing typically on dead conifer wood, some Oak Barkspot, Black Bulgar, Blushing Bracket and several Hoof Fungi. 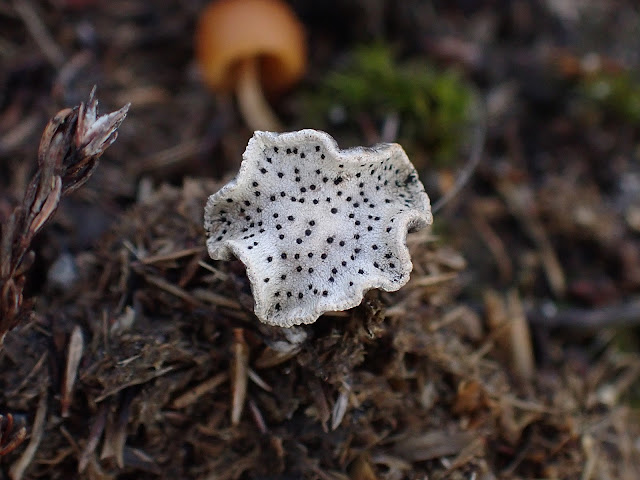 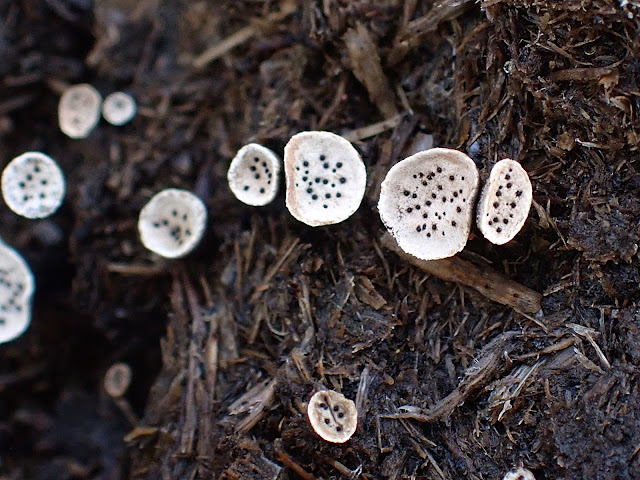 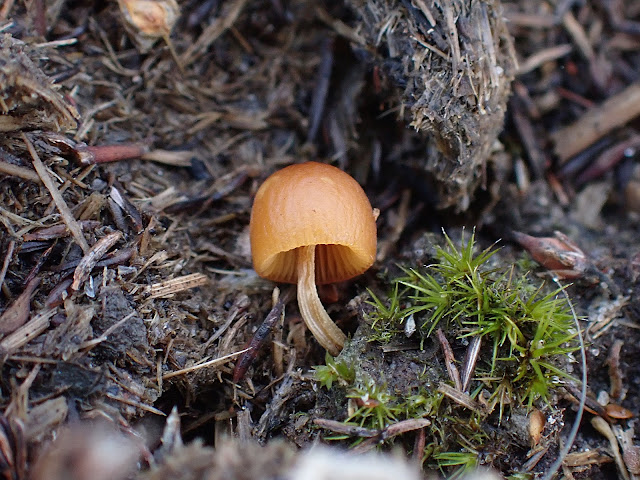 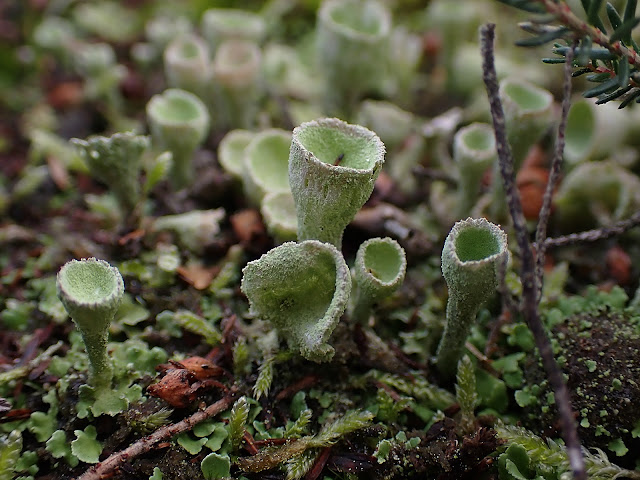 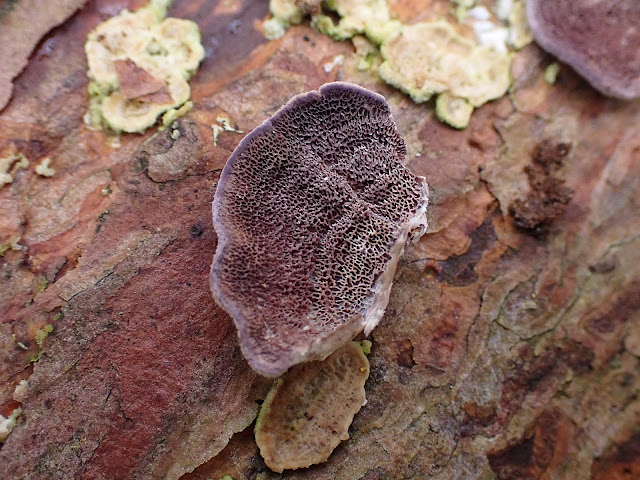 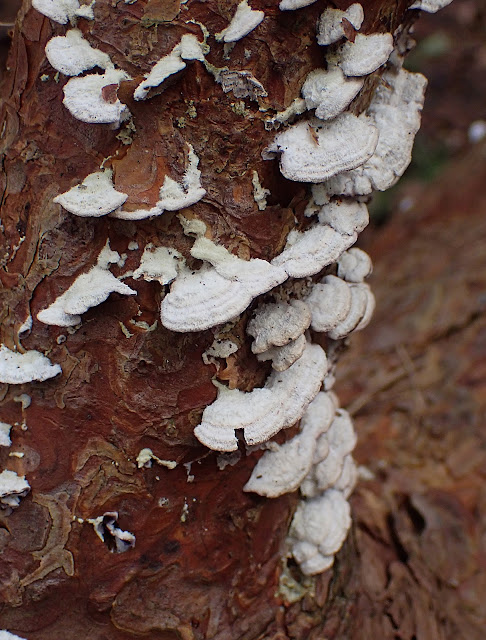 Anything worth mentioning in this blog is mainly restricted to weekends at this time of the year when most of daylight hours are spent working. On Wednesday however I was getting our wheelie bin in and spotted a decaying leaf on the drive that was covered in a slime mould.

I wasn't able to identify it myself so posted pictures on the slime mould id page on Facebook and the experts deemed it to be Didymium squamulosum. On the face of it a series of plain white spots about 1mm across but much more impressive in close up as shown in the photos below. 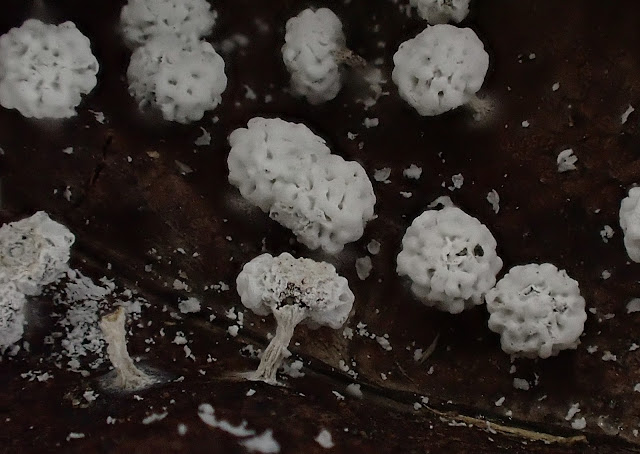 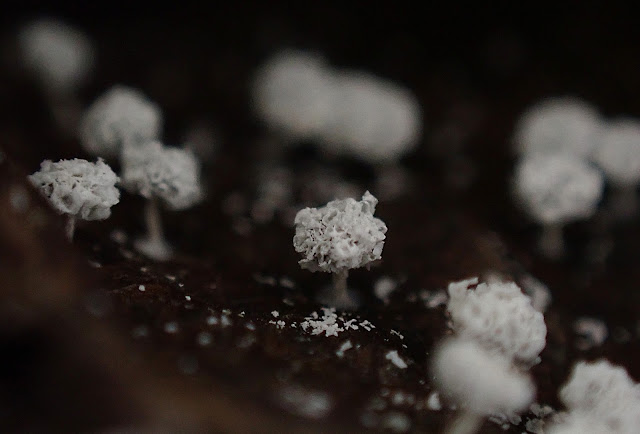 I've been putting off a visit to the Trinity broads for the various rare ducks that have been lingering around the area for most of the winter. Yesterday I cracked though and headed to Filby Broad where most of them have settled in recent days. On arrival I was greeted with a mass of ducks at long range on the only ice-free section of the broad - great! Along with Ashley Banwell we eventually managed to pick out the good birds but it took some while and the distance meant it wasn't exactly a visual spectacular. The birds were a 1w drake Ring-necked Duck, 1 Ferruginous Duck, 3 Smew (all redheads) and 2 Scaup (1w drake and female) with c40 Goldeneye and loads of Tufted Duck, Pochard and Coot to search through. All the fun of the fair!

After that we headed to St Benet's Abbey for a walk and to catch the sunset. The latter was a little disappointing but some good birds were had - 15 Bewick's Swans at close range by the entrance road and 9 more a huge distance from the 'hill' by the abbey cross. 15 White-fronted Geese flew over and 3 Barn Owls entertained as the light began to fade.

A walking day in the Southwold area but not before a stop in Reydon on the way!

Luckliy the 4 Waxwings were present on arrival in The Drive and desoite shunning the berries in favour of ariel insect feeding I was able to get a few decent shots with a little patience and fieldcraft. The group consisted of 3 adults and 1 1w.

Later on in the day a 1w Whooper Swan was a rather strange sight on the sea just south of Southwold pier in the company of a single Red-throated Diver. A stop at Hen Reedbeds revealed no snakes lurking under their metal sheets but a single Reed Bunting stopped for a shot and 15 Curlew flew over. 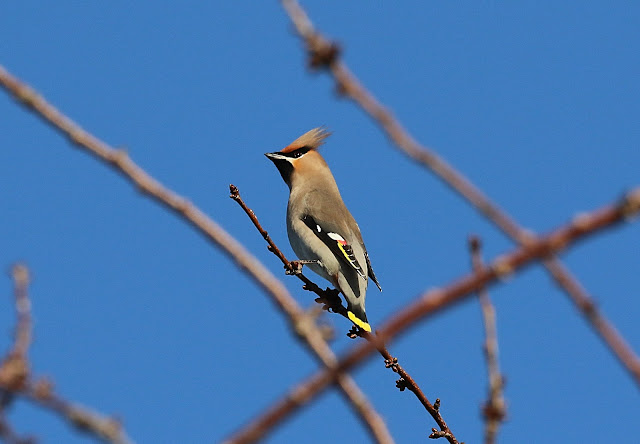 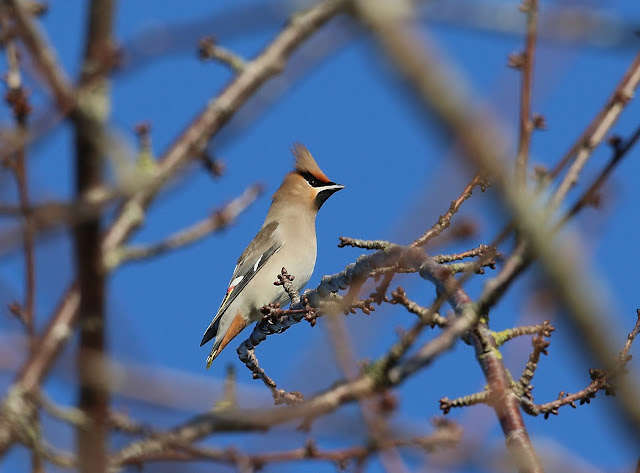 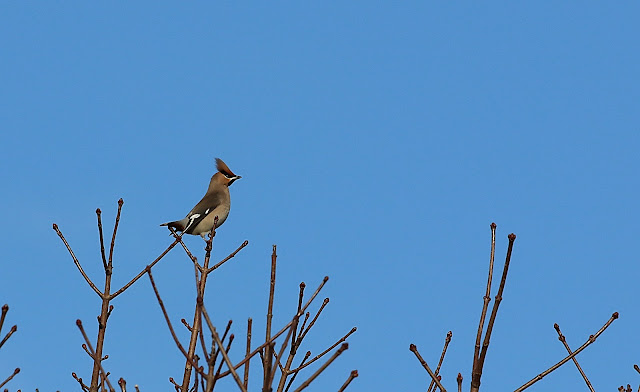 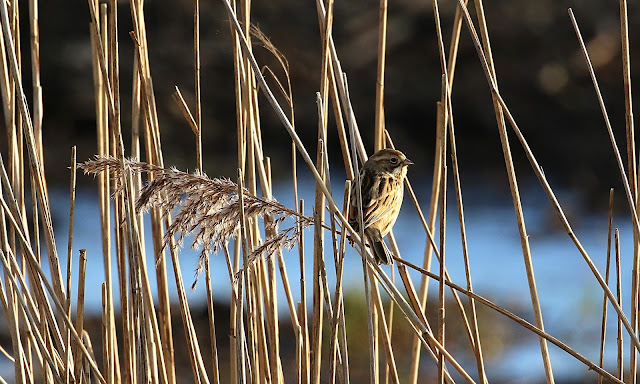 My old friend Vanna recently found a very rare beetle in Earlham Cemetery in Norwich and via her husband Jeremy I arranged a rendezvous with Vanna on Friday to try to seek them out. My expectations weren't high as a recent look by the finder when she took one back she'd taken home to study had failed to reveal any. Lifting the rotting log she'd found them under however revealed 2 straight away which were quickly joined by a 3rd. And what are they? Graveyard Beetle, Rhizophagus parallelocollis. A 2mm long beetle with a close association with graveyards and crypts where they feed on decaying organic matter. I will leave the rest to your imagination! This was the first record at the site since 1904, indeed there are very few county records of this unobtrusive tiny beetle.

When we'd photographed them we let them be and had a wander around a few spots in the cemetery checking for anything else. And very productive it was with 7 species of ladybird recorded despite it not being a very good year for them - Cream-streaked, Cream-spot, Pine, Harlequin, 7-spot, 10-spot and the tiny and very local species Red-headed Rhizobius. That wasn't all though, we (mainly Vanna!) also found the beetles Birch Catkin Bug, Orsillus depressus, Deraeocoris lutescens and Lesser Thorn-tipped Longhorn Beetle. There were 2 new harvestmen for me too with Spring Harvestman and the rare Dicranopalpus larvatus plus Spotted Snake Millipede.

Red-belted Bracket is a rare fungus in the UK with most records from Scotland. It is also one I've wanted to see for some while. Fortunately Vicky Rusby had found it on the edge of North Warren about a week previously and kindly gave me a grid reference. Readers of this blog will know that Belinda and I do a lot of walking in that area and now I had the excuse for another one!

Strangely enough we bumped into Vicky not far from the spot and she gave me some verbal directions which enabled us to find it more easily. And what a stunner it was - there being several fruiting bodies along one large rotting birch log. It wasn't the only fungi seen, on the walk we also clocked up Blushing Bracket, Netted Crust, Yellow Brain, Birch Polypore, Silverleaf Fungus, Russet Toughshank and the lovely Oakmoss Lichen.

There was also some bird action of interest with a very early booming Bittern on North Warren, Great White Egrets on North Warren and Thorpeness Meare, c60 White-fronted Geese, many hundreds of Barnacle Geese and a Marsh Harrier on the main open marsh at North Warren with Bearded Tit, Bullfinch, Sparrowhawk and Green Woodpecker also recorded.

A very Happy New Year to everyone!

We spent the first couple of days of the year away with our motorhome staying overnight on the seafront at Hunstanton close to the lighthouse.

On New Years Day we did a 18km walk from Hunstanton to Old Hunstanton, Holme, Ringstead, Ringstead Downs and back via Hunstatnton beach/cliffs. We were hoping for a nice sunset shining on the cliffs but it had clouded up by early afternoon. The red and white cliffs were lovely nonetheless. On the walk we encountered 4 Red Kites, a Chiffchaff in Holme village, 2 Knot from Hunstanton prom and plenty of Fulmars along the cliffs. Fungi provided the highlight of the day as I managed to find 2 specimens of Phellinus hippopaeicola (a small bracket that grows exclusively on Sea Buckthorn) at Old Hunstanton, Beechmast Candlesnuff where we stopped for lunch on Ringstead Downs plus Alexanders Rust. All 3 were new for me. Sea Spurge on Holme Beach was also good to see. 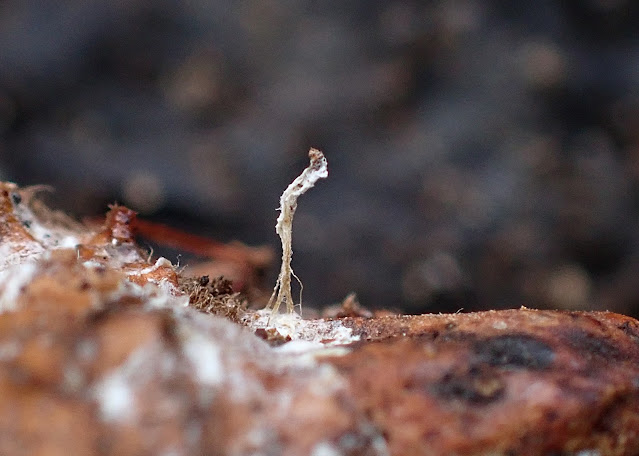 After a peaceful and cosy night in Hunstanton we drove the short distance to Dersingham after breakfast and parked in the village. We walked once more taking in Dersingham Fen, Dersingham Bog, Wolferton Scissors Road and Sandringham Woods. At Dersingham Fen I had an appointment with a rare fungi that was found there very recently. Armed with a 10-figure grid ref I was able to find it easily - the distinctive Xyleria cinerea growing on cut gorse, the first record for the county and only about the 5th for the UK. Nearby there was some very curious looking presumed Candlesnuff, Deceiver, Turkeytail, Silverleaf Fungus and Purple Jellydisc. Further around the walk I also found Dung Roundhead, Hoof Fungus, Bracken Map, Wrinkled Crust and Common Grey Disco. On Dersingham Bog the lovely lichen Cladonia uncialis was spotted by Belinda. Having nearly finished the walk we bumped into Steve and Gill Judd and luckily for them I was able to show them the Xyleria cinerea with Steve introducing me to possibly the most boring fungus ever - Dennisiela babingtonii which grown as a film on the upper surface of holly leaves! In Sandringham Woods a pair of Firecrests were seen. 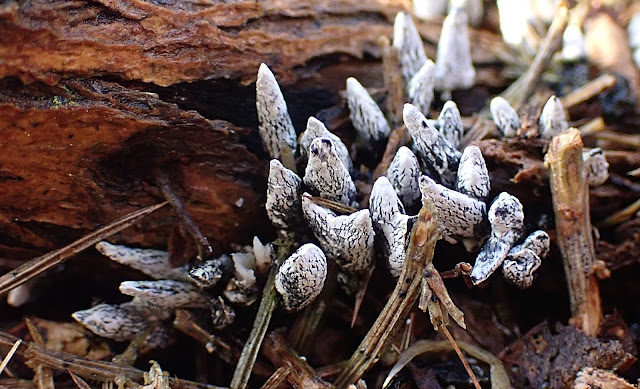 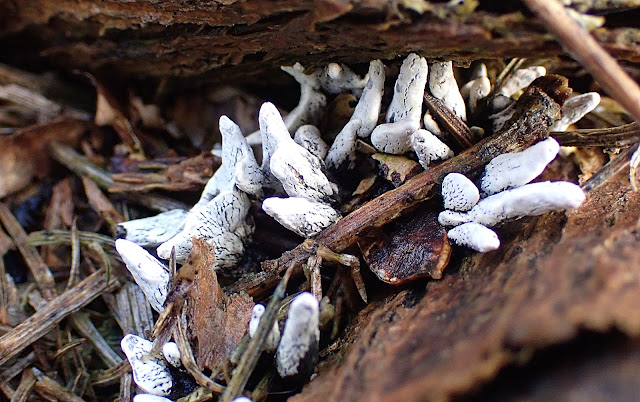 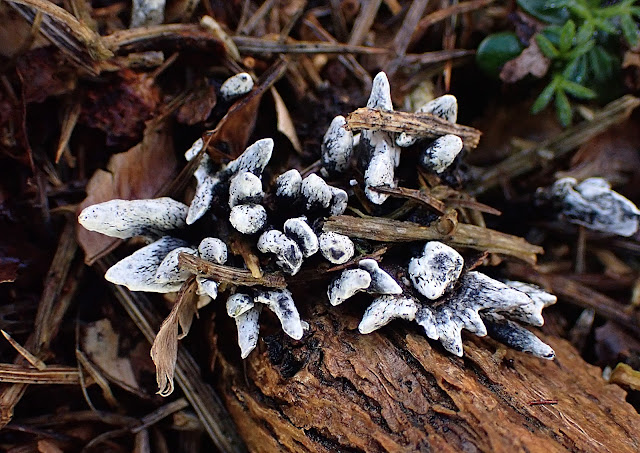 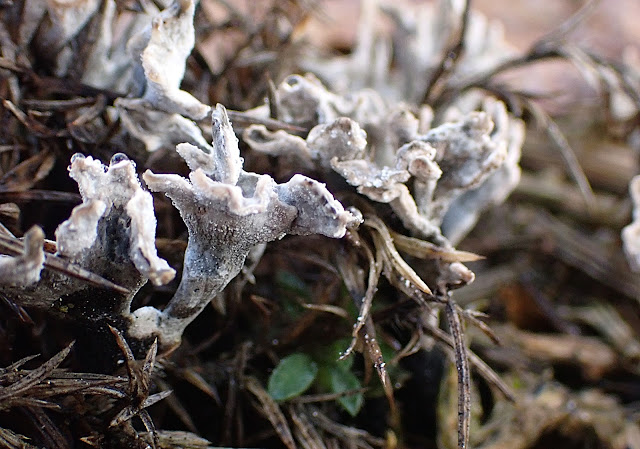 Email ThisBlogThis!Share to TwitterShare to FacebookShare to Pinterest
Older Posts Home
Subscribe to: Posts (Atom)
'Travel is fatal to prejudice, bigotry and narrow-mindedness. Broad, wholesome, charitable views of men and things cannot be acquired by vegetating in one little corner of the earth all one's lifetime' - Mark Twain