A very quick pop in to a site I first visited in 2015 and wanted to return this year.
This time I was pleasantly surprised to count no less than 64 flowering spikes of Man Orchid which is very scarce in East Anglia. Some were in full flower including some very robust specimens whilst some had already gone completely over. Also there was a single Pyramidal Orchid and a singing Lesser Whitethroat. 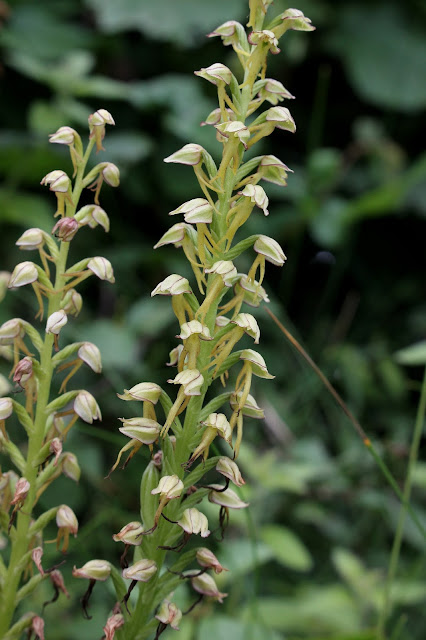 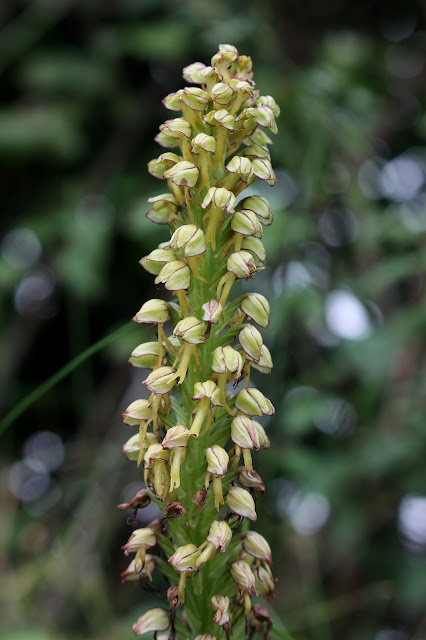 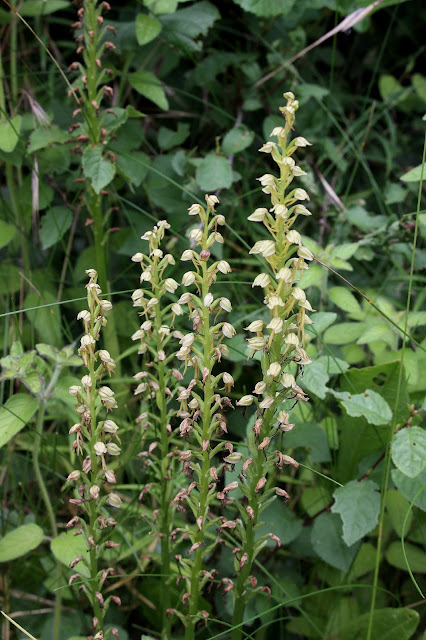 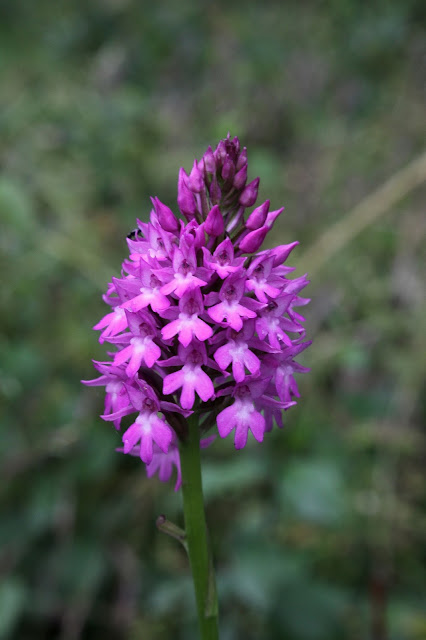 An after work pop in while passing. I climbed the gate and had a wander around the new 'Lilypad' Pit just off Watermill Lane. With the vegetation only really having established itself there last year it was very pleasing to find a colony of Red-eyed Damselflies on the lillypads, plus plenty of Black-tailed Skimmers and Four-spotted Chasers. Also noted were Common Blue Damselfly, Blue-tailed Damselfly, 4 singing Reed Warblers and 1 Sedge Warbler around the margins.
As stroll down to the mill and sluice added a nice Kingfisher on the Waveney plus Grey Wagtails, 2 Mistle Thrushes and a female Bullfinch plus several Banded Demoiselles. A pair of Sparrowhawks were also displaying over the lane as I walked back.
Posted by Chris at 18:23 No comments:

Early Marsh Orchid exists in 5 forms in the UK - incarnata, pulchella, coccinea, cruenta and ochroleuca. Most of the forms are reasonably common in the right habitat where they occur with the exception of the creamy-white ochroleuca which is exceedingly rare and known from only one site in the country.
As I do most years I visited that site today and found just 7 flowering plants. This is quite a few less than most years which I do hope doesn't indicate this small population is in trouble. Conditions seem the same as every year I visit and the flowers I did see were robust specimens so fingers crossed.
Also at the same site were numerous Common Spotted Orchids and Southern Marsh Orchids plus my first Meadow Browns of the year.
Nearby when on a walk a little later we saw hundreds of Banded Demoiselles and a single Painted Lady. 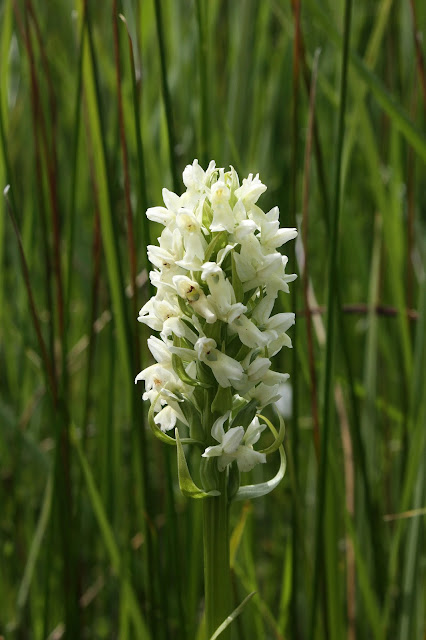 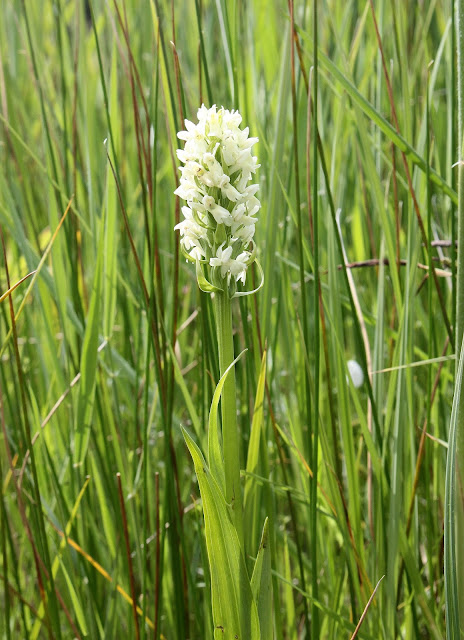 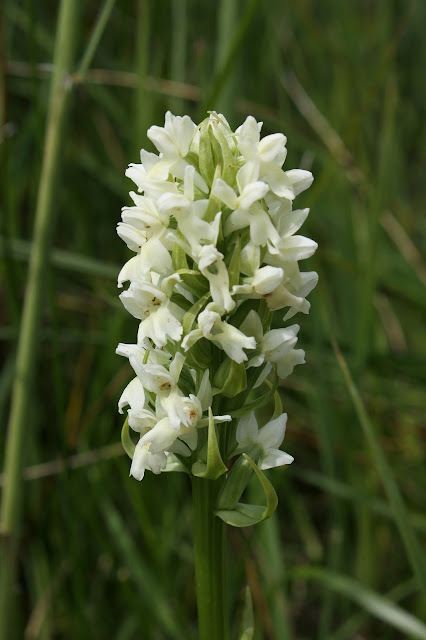 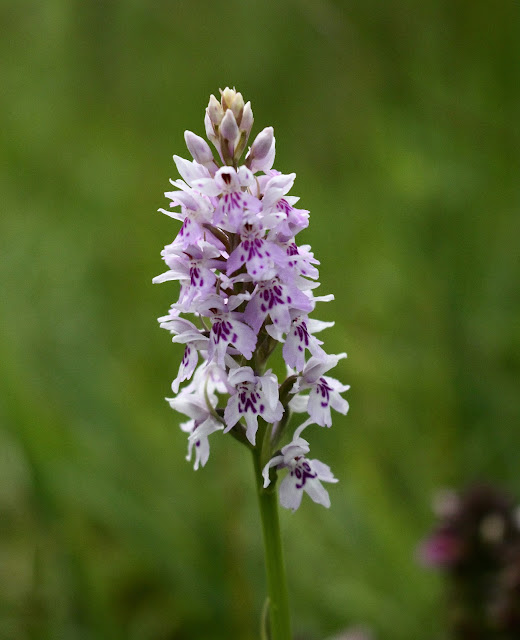 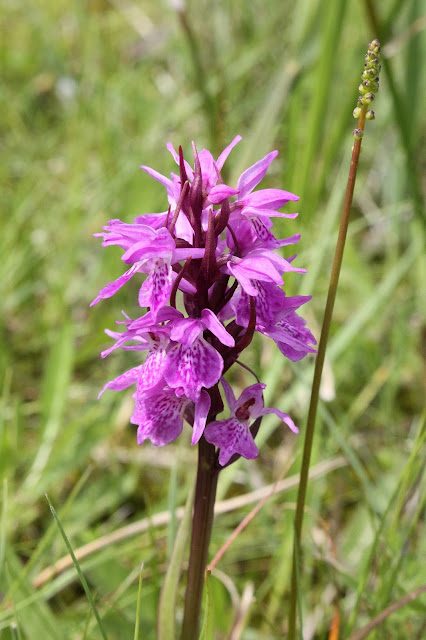 Southern Marsh Orchid
Posted by Chris at 17:59 No comments:

After playing things a bit casual and not going last night (cos I was knackered!) I waited until after the football (England 2-1 Wales) had finished before heading up to Titchwell.

Luckily the summer plumaged Great Knot was on the freshwater lagoon on my arrival and I was able to enjoy some lovely views of this stunner in a large flock of Knot. This was my 3rd in the UK after the Teeside and Breydon birds and the views I got were by far the best. After about 30 minutes it got up and flew towards the beach with a small group of Knot and having had my fill I didn't pursue it!

Also on the freshmarsh were loads of Black-tailed Godwits and Bar-tailed Godwits, 2 Little Ringed Plovers, plenty of Avocets with chicks, Dunlins, Little Tern and 2 Common Terns while 3 Cetti's Warblers were singing long the path.

At Choseley on the way back through I had Corn Bunting, Stock Dove, 2 Grey Partridges, Common Buzzard and Barn Owl.
Posted by Chris at 22:10 No comments:

A few bits from recent days

I've got a little behind with blogging so here's a quick summary of the 3 places visited over the last few days.

During the week I checked on our local (and Suffolk's only) Frog Orchids and were pleased to see them coming out. I counted 7 plants with no doubt more to come. The Green-winged Orchids there are mostly over but I did find 3 pure white 'alba' plants amongst them. Lesser Whitethroat and Common Whitethroat were singing as was Yellowhammer with plenty of House Martins feeding over the meadow too.

On Thursday a quick pop into Weybread GPs was a good call as I had 2 Otters on the 2nd biggest fishing lake plus singing Reed Warbler and Common Tern on Ocean Pit.

Yesterday (Saturday) saw us heading for the Broads where I was amazed to count at least 30 Fen Orchids out at their usual site plus Southern Marsh Orchid, 1 Swallowtail, 3 Norfolk Hawkers, c12 Black-tailed Skimmers, a very large number of Four-spotted Chasers and the odd Variable Damselfly amongst the Azure Damselflies. A Cuckoo was singing, 2 Marsh Harriers, Cetti's Warbler, Great Spotted Woodpecker and there were also plenty of singing Reed and Sedge Warblers. A Red Kite was also circling the A47 at Postwick at 11.30 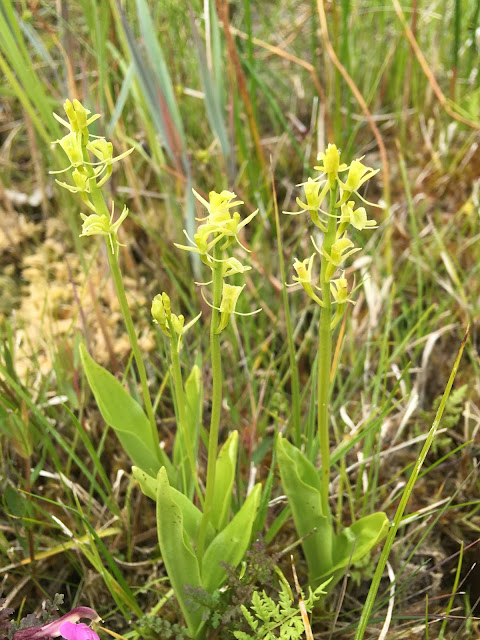 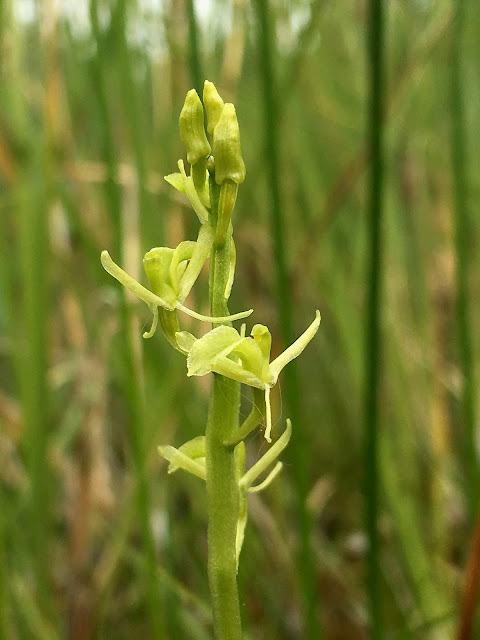 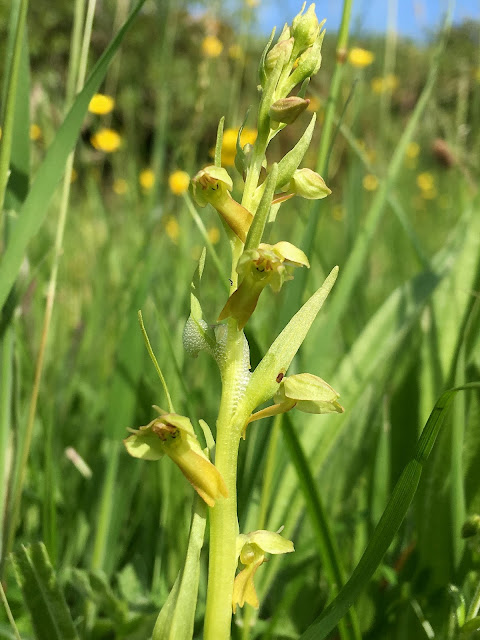 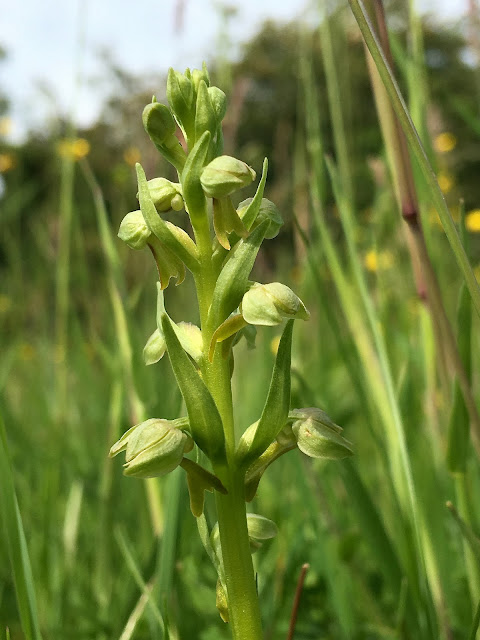 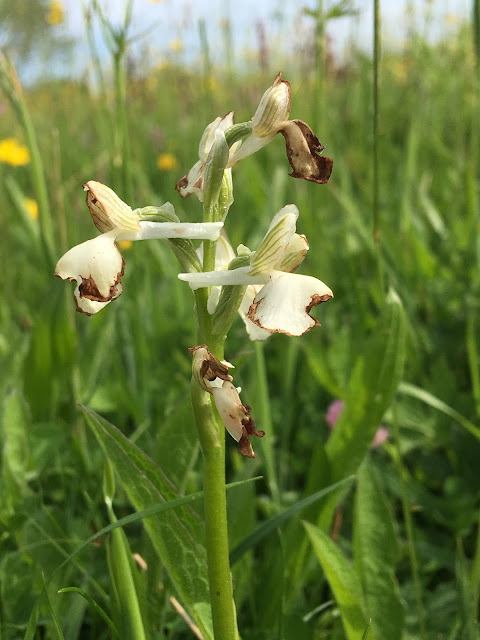 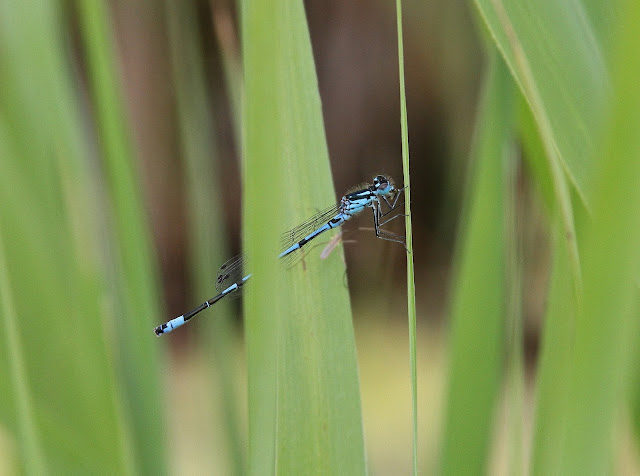 Variable Damselfly
Posted by Chris at 20:23 No comments:

Fun and Games with Blue-winged Teal at Carlton Marshes! 7 June 2016

Blue-winged Teal is a bird I've not seen for years so I was quite keen to see this one. Having decided not to go the previous evening due to reports of it being 'distant through the heat haze' I took my birding stuff to work today so I could dash off quickly from Weybread.
The bird didn't exactly play ball but luckily after a long walk and much scanning it gave itself up on the main scrape. A lovely looking drake in good light by viewing from the SW side of the scrape.

Also on the scrape were c5 Shoveler, c15 Teal, Little Egret, Snipe, Redshank, lots of young Lapwings and a dodgy Greylag x Canada Goose hybrid for those who like that sort of stuff. On the walk down the main track a nice Hobby hawked overhead and before that I'd scored with 2 Fen Raft Spiders in a dyke not far from the visiter centre, c12 Hairy Dragonflies, Scarce Chaser, Four-spotted Chaser and Painted Lady. Barn Owl and Cuckoo rounded things off.The spiders were very welcome and fullfilled my promise to myself that I was going to see them this year. It was also nice to catch up with Dave Holman and Peter Gluth too. Thanks for the lift down the track Pete!
Posted by Chris at 20:52 No comments:

A relaxed amble around Strumpshaw on a glorious sunny afternoon.
We concentrated mainly on insects but Swallowtail only gave itself up once - on the riverbank near Tower Hide. We did score with a good variety though - Hairy Dragonfly, Scarce Chaser, Norfolk Hawker, Variable Damselfly, Azure Damselfly, Blue-tailed Damselfly and Large Red Damselfly were the odonata while we also saw Painted Lady, Brimstone, Small White, Cinnabar and of course Diamond-backed Moth (part of a massive influx).
Birdwise we had our moments too with Hobby over the river near Tower Hide, 2 Bearded Tits, Marsh Tit, c8 Cetti's Warblers, 3 Pochard (breeders?) and Garden Warbler. 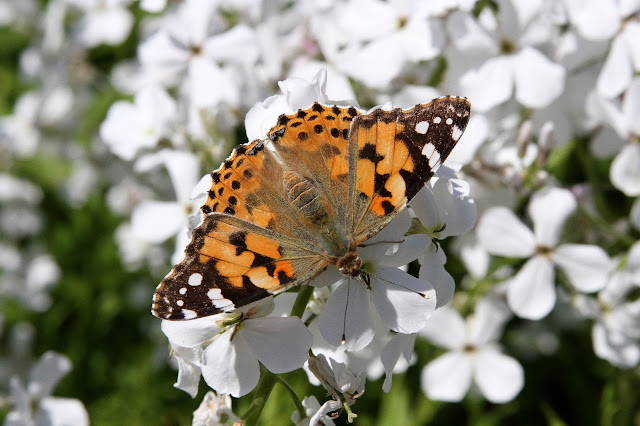 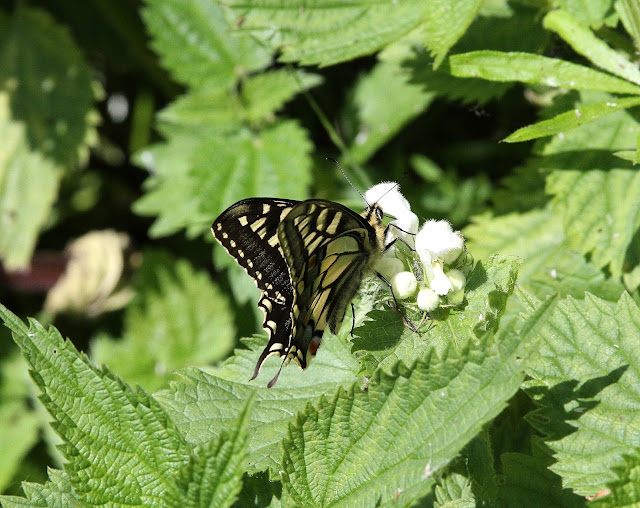 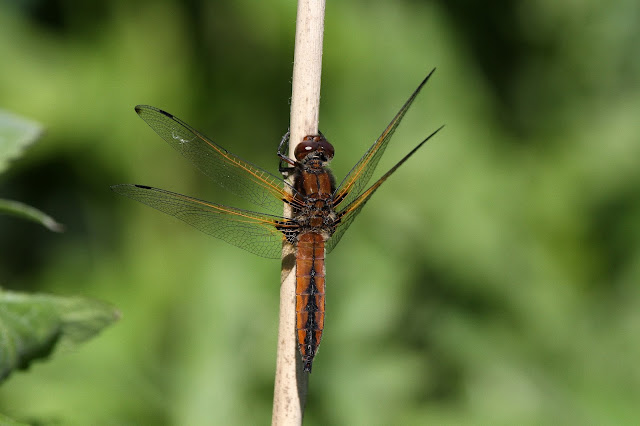 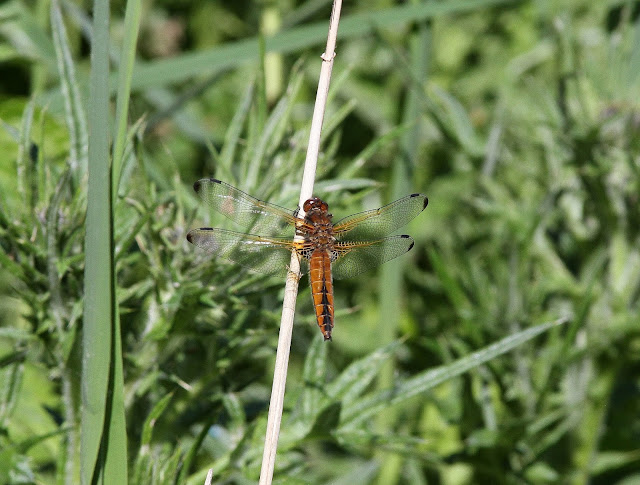 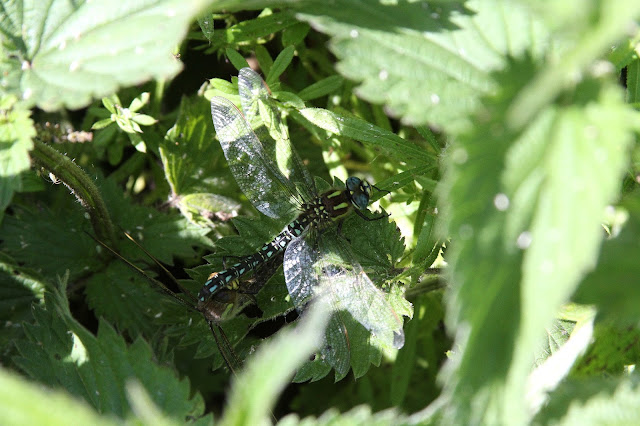 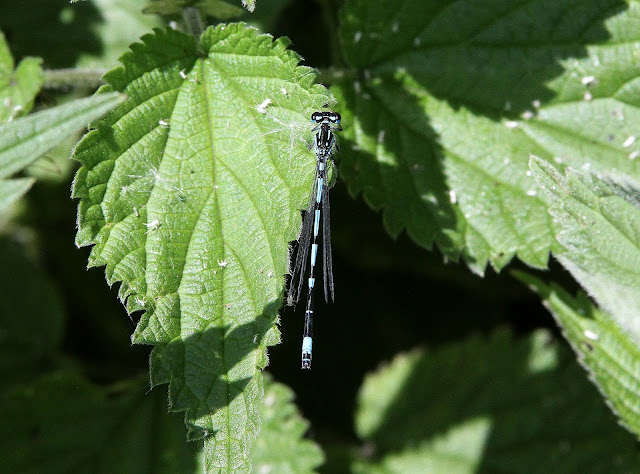 This is a site I'd never been to before despite driving past it many times. And it's actually a really nice spot.
Of course seeing the 2 Glossy Ibis upon arrival helped but there were also some other bits and pieces about. Wildfowl were plentiful with 1 Teal, 3 Shoveler, 24 Gadwall, c10 Tufted Duck amongst larger numbers of Mallard and Shelduck. Around the adjacent Pakenham Mill were a family party of Grey Wagtails (3 young), Kingfisher and 7 House Martin nests on the mill itself. 2 Common Buzzards soared over with one being a nice pale bird with a pale rufous tail. I also added Garden Warbler before I moved on.

My 2nd stop was the pig field just NW of Rymer Barn were a pleasant surprise of a 3/4th year Caspian Gull was amongst the closest birds. Still loads of gulls here so well worth a look for anyone passing.

Back at home in the evening whilst BBQing a Spotted Flycatcher popped up on the fence making it 4 years in a row we've had them in the garden! 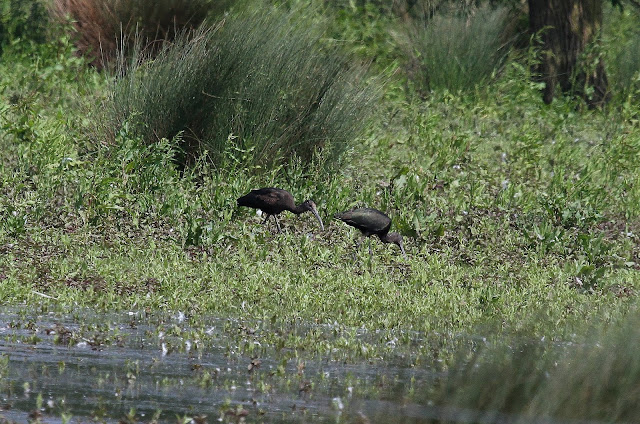 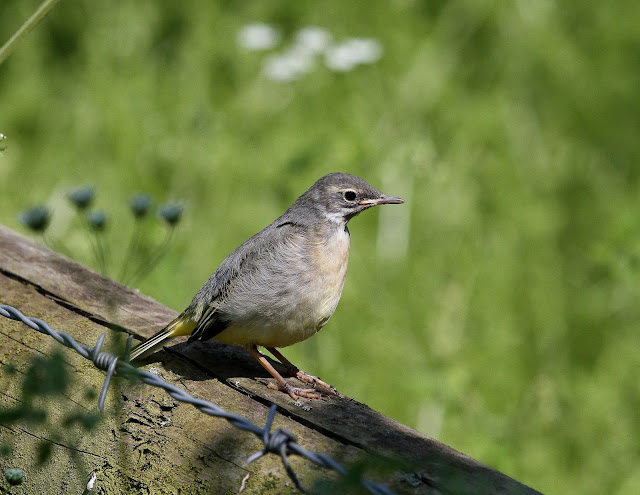 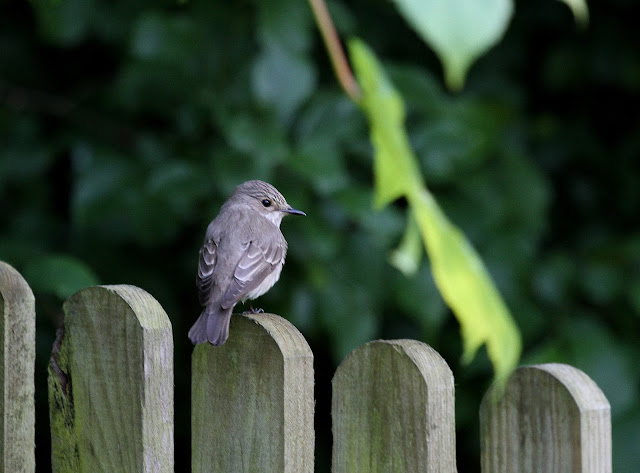 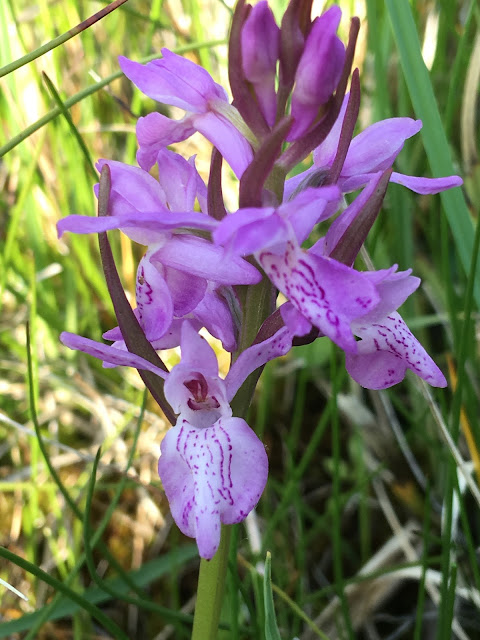 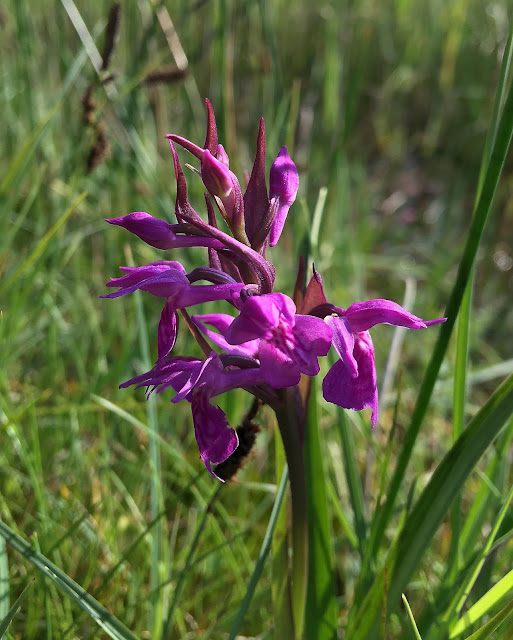 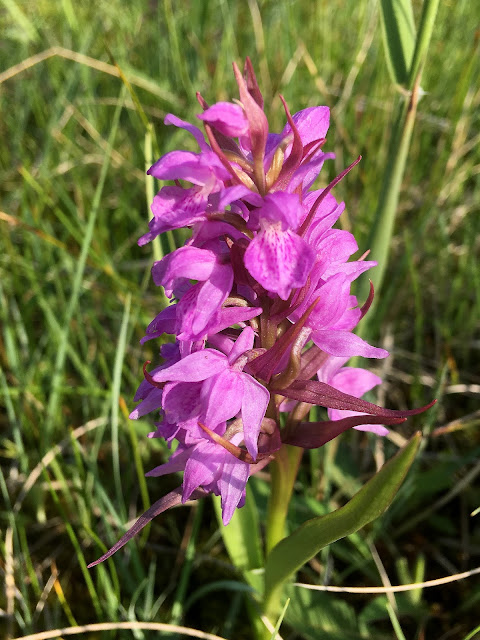 Southern Marsh Orchid
Posted by Chris at 19:16 No comments:

Flaming June?! More like freezing June!
It was blowing a gale and drizzling on and off at Dip Farm in Gunton today which made for some difficult viewing conditions. With a great deal of patience I managed some views of the Greenish Warbler along the north side of the football field. It was also singing on and off which was nice to hear as well as the typical call very like Pied Wagtail. The only other birds in the hedge were Chiffchaff and Common Whitethroat.
Posted by Chris at 16:35 No comments: