June is typically dead birdwise but this lovely adult Rose-coloured Starling (I still prefer Rosy Pastor!) certainly livened up an otherwise uneventful Mid-summers Day. It was frequenting gardens at the junction of Pinewood Avenue and Breydon Way in a housing estate in Carlton Colville on the edge of Lowestoft. Elusive for long periods it seemed that it never left its favoured garden but popped up only twice in the 2 hours I was there. It was always just over the top of a hedge needing me to stand on tiptoes to get any shot at all but better that than being too short and not seeing it at all like some poor chap who was there!

Norfolk (and indeed East Anglia) has just one site for the dainty Small Red Damselfly. I'd not visited the site for many a long year. Although I knew the site it was so long ago that I had to ask for some specific directions!
On site they were easily found and are obviously emerging. In all I saw c20 of which most were teneral specimens, luckily I did also find a couple of nice males to photograph. I was also most grateful for the advice to take my wellies! There were a few Large Red Damselflies in the same spot plus loads of Southern Marsh Orchids.


Small Red Damselfly
Large Red Damselfly
At Foxley Wood NWT later on I was lucky to find 4 Greater Butterfly Orchids (3 in flower). The first was in direct sunlight and going over but the other 2 were in the shade and in superb condition. Loads of Common Spotted Orchids of numerous colour variations were also out. A nice showy Garden Warbler was singing its head off and several Emperor Dragonflies patrolled the main ride as I enjoyed the peace and tranquility. I was the only one there.


Greater Butterfly Orchid
﻿
One last stop on the way back into Norwich was at Lenwade where there were loads of Red-eyed Damseflies on their usual ponds, another Emperor Dragonfly, Four-spotted Chaser, Banded Demoiselles and I managed to photograph this young female Blue-tailed Damselfly of the 'rufescens' form. Also seen while out and about today were Large Skipper, Meadow Brown, Brimstone, Small Tortoiseshell, Speckled Wood, Large White, Red Admiral and 2 early Ringlets.
'rufescens' Blue-tailed Damselfly
﻿
﻿

The soldiers are marching in the meadow, 8 June 2014

Well marching might be a slight exaggeration, maybe limping would be a better description. I'm referring to Suffolks only colony of Military Orchids at the Rex Graham Reserve near Mildenhall. Sadly this years open day is slightly late and most of the numerous plants were well past their best. At least 20 Common Twayblades were also seen together with Black-tailed Skimmer, Emperor Dragonfly and the first Large Skippers of the year.

A walk later at West Stow CP had us marvelling at the largest numbers of Banded Demoiselles I've ever seen and plenty of Common Blue Damselflies along the River Lark. Trying to get some photographs wasn't easy though! My 1st Small Heaths of the year were also out. 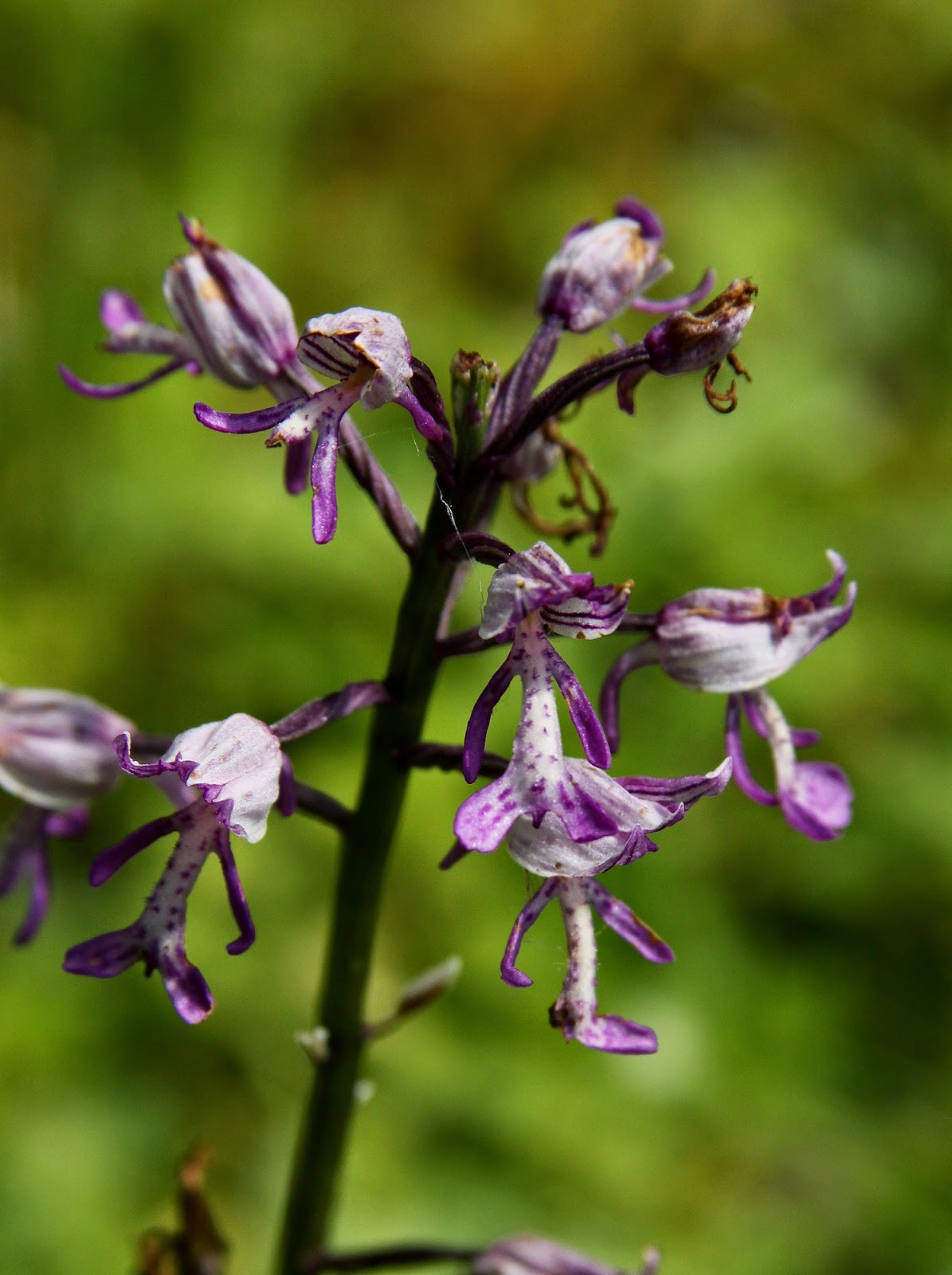 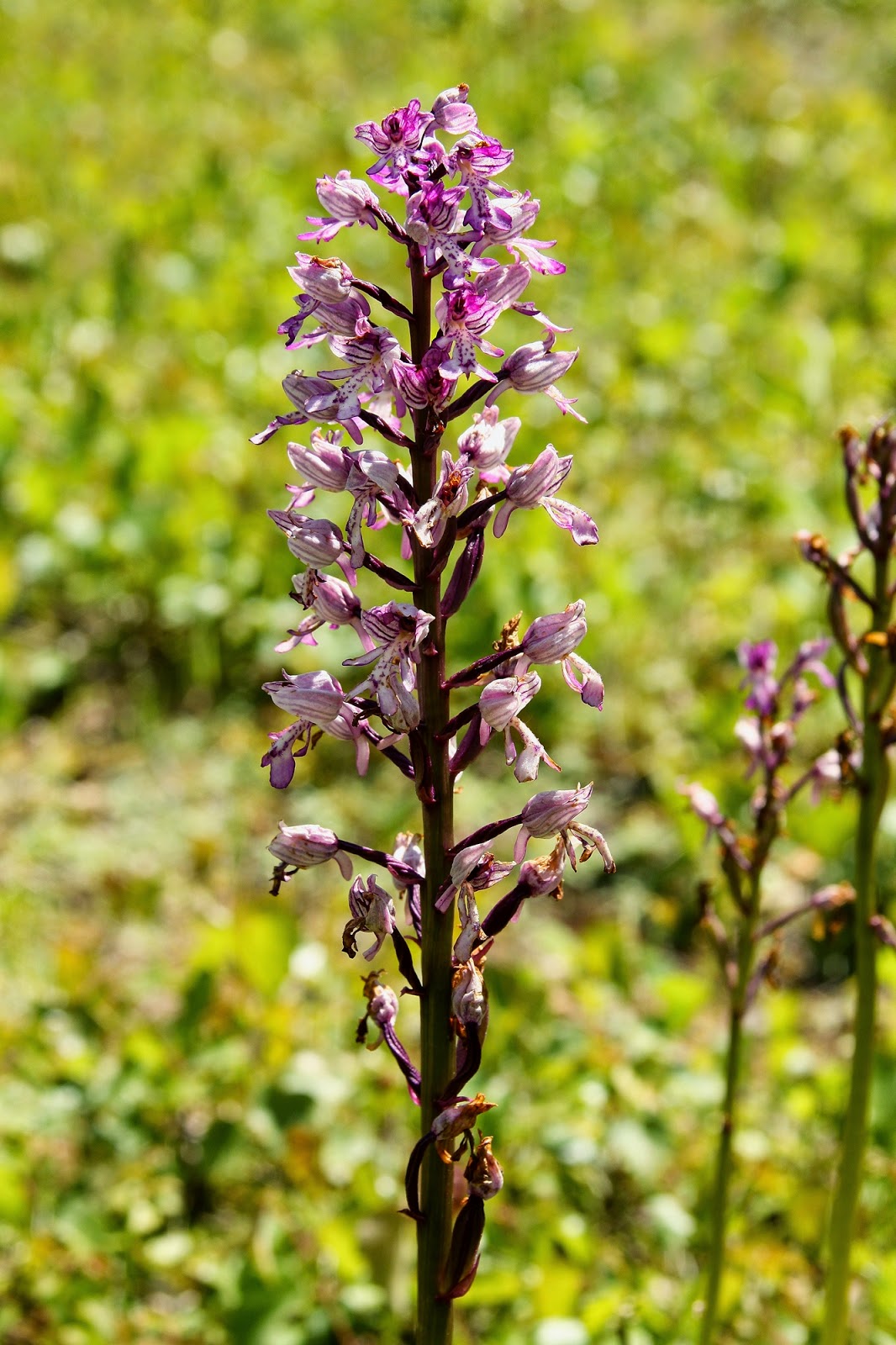 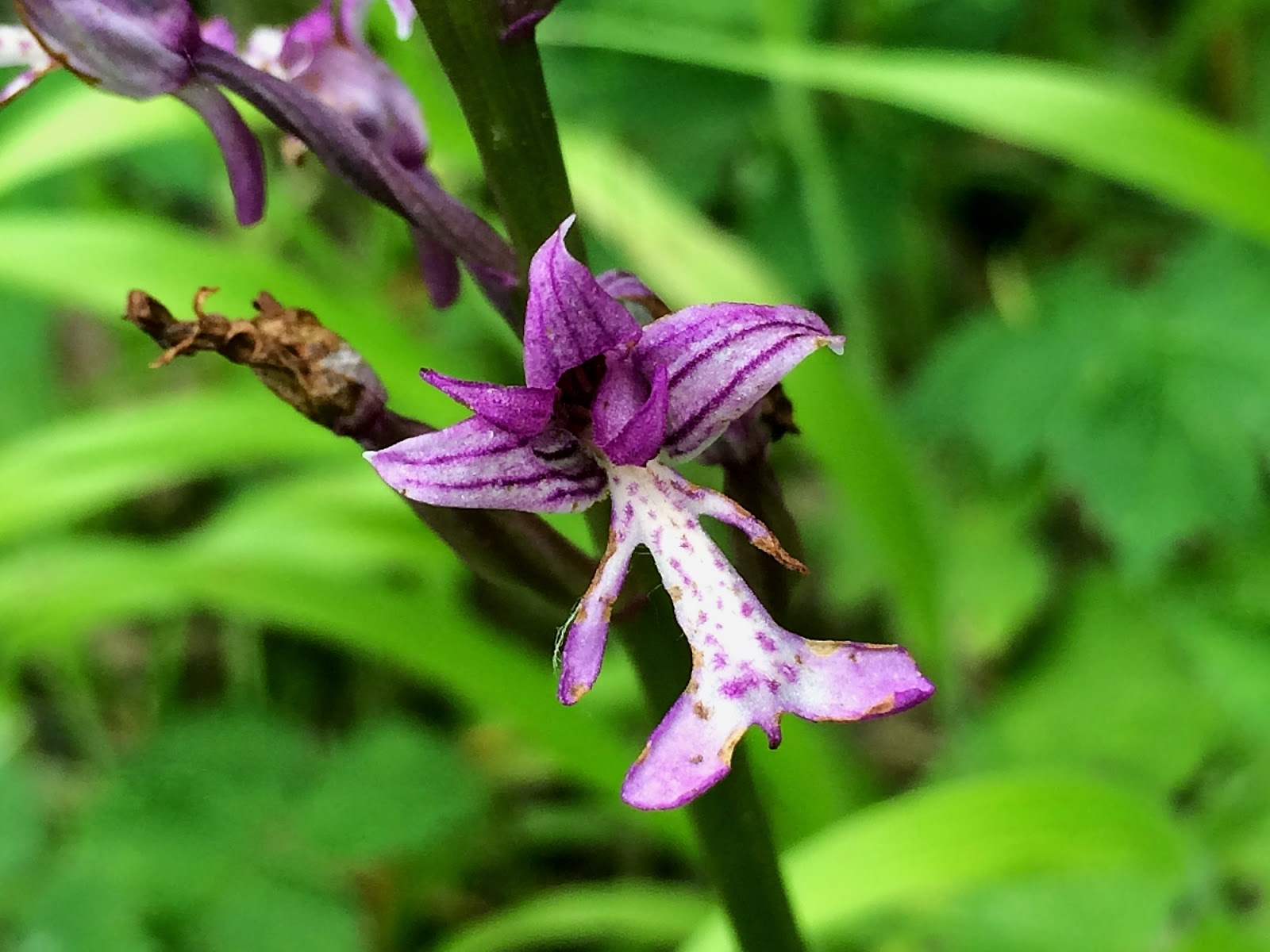 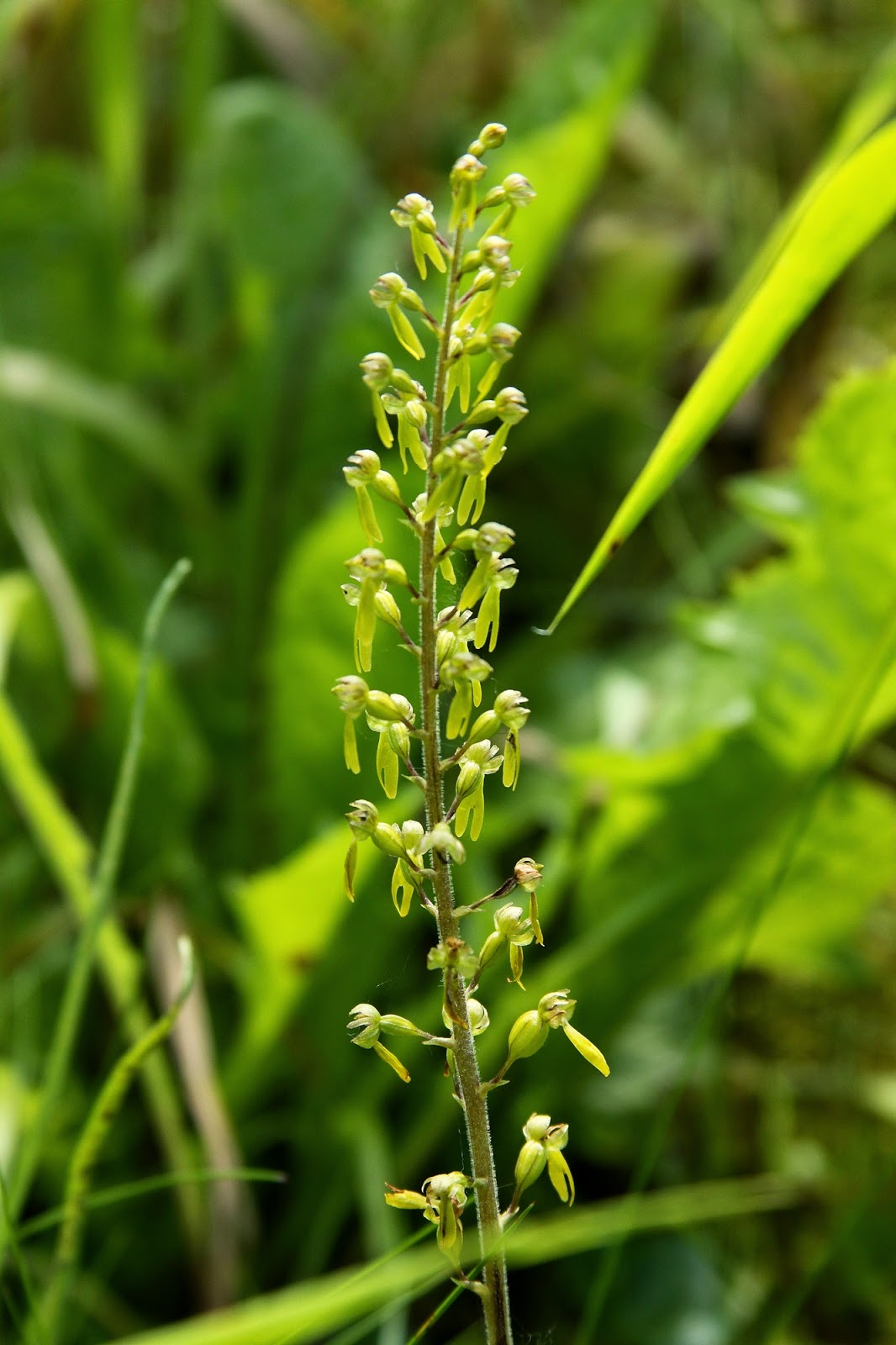 A couple of hours out this afternoon confirmed the Bee Orchids of the variation chlorantha are still all present and correct at their traditional site near Loddon. I counted 16 spikes and 3 spikes of standard Bee Orchids.
Then on to Geldeston Locks where I found just a single Scarce Chaser amongst loads of Banded Demoiselles and Azure Damselflies

With a little time to spare between work commitments I ventured out to 3 different sites in north Suffolk this afternoon. The first was my usual site for Frog Orchid where I quickly found c15 spikes in the traditional area. I normally see nobody else here but this time 3 people were looking for the frogs but were failing dismally until I pointed them in the right direction. These are VERY easily overlooked if you don't know the spot! It was pleasing to note both red and green varieties of this locally rare orchid that no longer occurs in Norfolk, Essex or Cambs any more and is restricted to just this site in Suffolk. Pyramidal Orchids are common here too and the first few were just starting to poke their heads up.


Frog Orchid, green form
Next stop were a couple of fen sites in the upper Waveney Valley. At the first the mega rare creamy white 'ochroleuca' Early Marsh Orchids were nicely emerged and looking good. I only counted 8 spikes though which I hope is just a sign of my early visit and there are more to pop up as the month progresses. This site is the only place in the UK to see this critically endangered form. A wander around the area also produced quite a few Southern Marsh Orchids (including 1 almost white specimen which may be of the very rare form 'albiflora'), Common Spotted Orchids and a presumed Common Spotted x Southern Marsh hybrid which is shown below. Also here were 2 Hairy Dragonflies, c6 Four-spotted Chasers, Large Red and Common Blue Damselflies.
'ochroleuca' Early Marsh Orchid


Four-spotted Chaser
﻿
A quick call in at the 2nd site, Theltenham Fen revealed that the regular 'incarnata' Early Marsh Orchids are mainly going over but I did find one nice flower to photograph. Loads of Southern Marsh and Common Spotted Orchids here too with a Cuckoo calling from the woodland at the back.


'incarnata' Early Marsh Orchid
Posted by Chris at 12:52 No comments:

I've been keeping up with moth trapping on as many nights as I can fit in around other things going on (mainly work and dashes up to the coast for birds!). Saturday night, 31 May was an epic night with 120 moths in the trap and a really good variety of species. It took me most of Sunday to gradually get through them. A selection of the best were Grey Pine Carpet, Swallow Prominent, Middle-barred Minor, Common Wave, Buff Ermine, Garden Carpet, Pale Tussock, Large Yellow Underwing, Flame, The Snout, Scorched Wing, Clouded Silver, Vine's Rustic, Beautiful Golden Y, Lime Hawkmoth, Peppered Moth and Setaceous Hebrew Character.

Here are some pics of some of the good lookers from the past few days:


Peppered Moth
Posted by Chris at 19:07 No comments:

Just like buses - you wait over 2 years for one and 2 come along in 5 days. Norfolk ticks that is!
This was #385 and counting...
Managing to get off work early as I'd got ahead of myself anyway I grabbed my optics and hot-footed it up to the coast. A leg-sappingly long walk (and a stumble into a rabbit hole just as I got to the spot!) later I joined the small crowd and within a few minutes was feasting my eyes on a fantastic singing male Spectacled Warbler in an area of bushes and scrub on the landward side of the dunes. During the next hour and a half it showed well on and off but as a bit of drizzly rain set in it slowly became more elusive. Although mostly at mid-height in the bushes it did drop lower, even on to the ground sometimes and gave brief but strong bursts of song.
A 1s Little Gull was also picked up by and eagle-eyed Jus as it flew west over the dunes.
On the more leisurely stroll back with Jus a Spoonbill flew west and a Cuckoo was calling off towards Burnham Overy village. Other than the odd Little Egret, Common Whitethroat, Bearded Tit and Sedge Warbler that was pretty much it.
Along the B1105 between Wells and Fakenham I also had a male Marsh Harrier and Grey Partridge.