Violet Helleborine has been on my radar for a while and with yet another scorching day the shady woods of south Suffolk seemed like a good option. After a long walk around the wood and many mozzie bites (shorts were not a good idea!) I eventually located a small group of loosely scattered plants and pleasingly they were all in flower and in good condition. This species is a very scarce one in East Anglia with only a couple of Suffolk sites that I know of. It's stongholds are the beechwoods of the Chilterns where I'd seen my only other ones many years ago and Kent/Surrey/Sussex. Whilst stumbling through the woods I also found a nice patch of Herb Paris and some long gone remnants of Early Purple Orchids. At a woodland pond there were loads of Ruddy Darters and a single Southern Hawker.

Well worth the attack of the killer mozzies and probably my last local orchid of the year.

With 2 breeding pairs of Black-winged Stilts in the south being well documented this summer there was another pair breeding in west Suffolk that were completely off the radar! News broke of this successful pair near Cavenham Heath about a week ago when the young had fledged. They must have bred at one of the gravel pits in the area and either been completely overlooked or just kept quiet. I made the trip this morning and an adult was on view on my arrival on the far side of the main gravel pit. With some patience I eventually had 2 adults and 2 juveniles as they flew in from an unseen pit behind the main one. The juveniles appear fully grown whilst one of the adults has a clean white head/neck and the other a black hind neck. Distance and heat haze prevented photography but even at range I also managed to pick up a Wood Sandpiper, several Lapwings, Great Crested Grebes and a Little Egret while Green Woodpeckers were a regular sight. Reed and Sedge Warblers were still in full song.

On nearby Cavenham Heath an impressive post-breeding flock of c25 Stone Curlews were very welcome. An Emperor Moth caterpillar crawled across the Icknield Way track and butterflies included Small Heath, Small Copper and Common Blue amongst the more numerous species.
Posted by Chris at 16:05 No comments:

An awesome after work dash to Breydon and a walk along the south wall that felt like far more than the 1.5 miles being quoted! But it was well worth it with some pretty distant but more than adequate views of the adult summer plumaged Great Knot on the flats on the far side of the channel. My 3rd Norfolk tick of 2014 which has been unheard of in recent years. After a good grilling for a couple of hours it flew a long way 'down river' and was subsequently scoped again on the way back when it was close to the tern rafts. Other waders included 1 Greenshank, 2 Whimbrel, Curlew, Spotted Redshank, Common Redshank, Black-tailed Godwit, Oystercatcher, Avocet and Golden Plover plus a handful of the usual Little Egrets. The knot was far too distant to photograph but Will Soar did very well get the shot below. 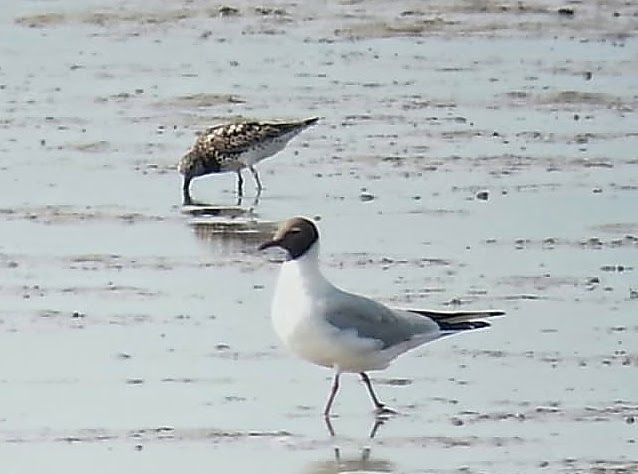 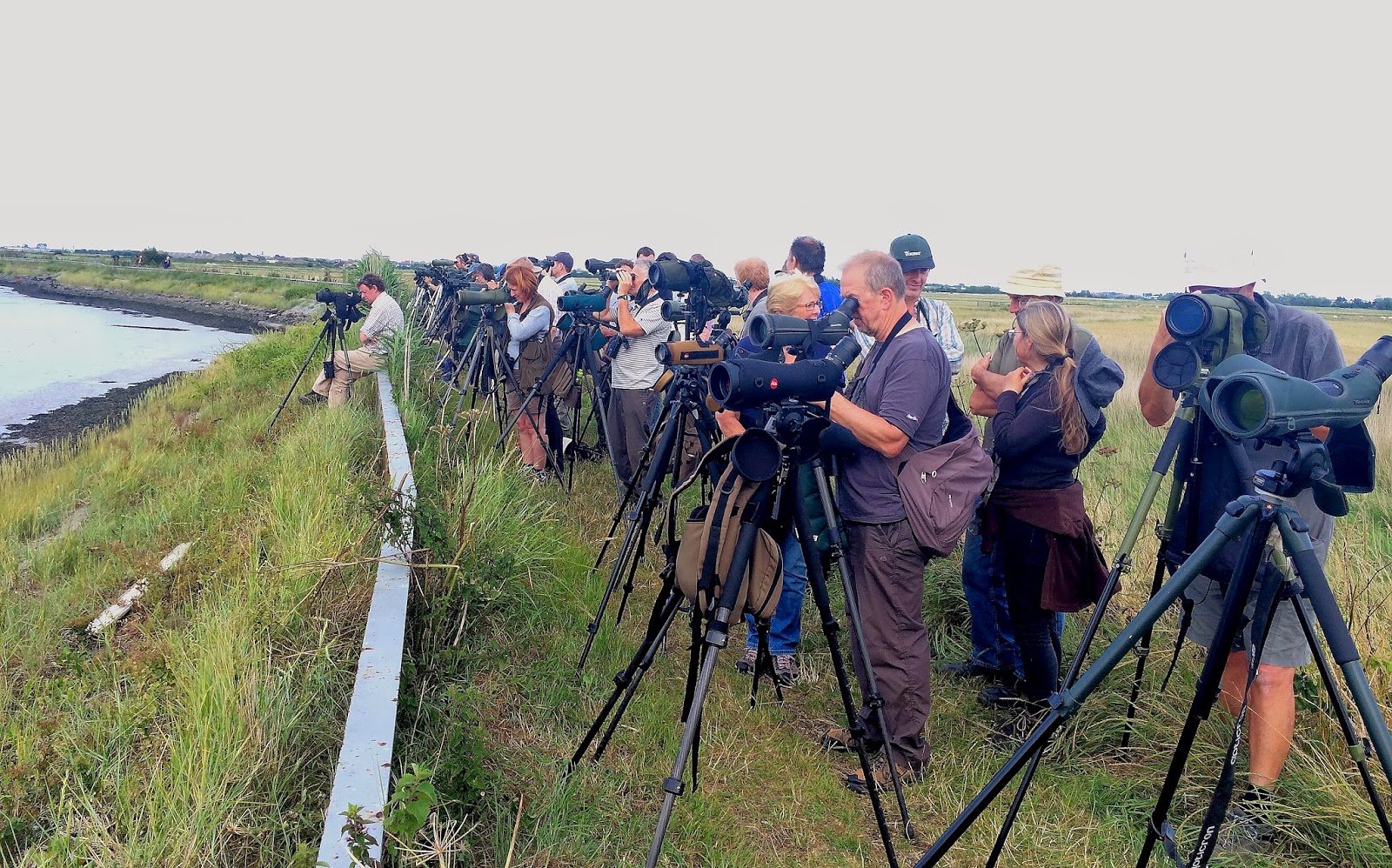 Great Knot twitch (if you can't get a photo of the bird, get one of the birders!)
Posted by Chris at 22:29 No comments:

A long and sweaty walk around the Westleton Heath/Dunwich area was pretty unremarkable naturewise. The only birds of note were a Woodlark singing like crazy (at 16.30 in mid July!) on the north side of Dunwich Heath, 2 Stonechats, Garden Warbler, Green Woodpecker and a Common Buzzard. A dead Adder on the Minsmere access road means Belinda still hasn't seen an alive one!
Insects were numerous though, odonata included my 1st Southern Hawker and Common Darters of the year but butterflies were to the fore. Several Graylings were out and a single White Admiral were joined by Red Admiral, Peacock, Speckled Wood, Small Heath, Meadow Brown, Ringlet, Gatekeeper, Large White, Small White, Brimstone, Small Tortoiseshell, Large Skipper and Small Skipper.
Best was saved until last though as a large green caterpillar crawled across the track on Westleton Heath which was later to be identified as an Emperor Moth caterpillar.

White Admiral
Posted by Chris at 10:28 No comments:

The helleborines form part of the orchid family of which I've been trying to catch up with most of our local ones this year. With a free day I headed for a site in the Brecks which I've not visited for a few years where there always used to be 2 helleborine species growing almost side by side. And bingo, both are still there! I saw 8 Broad-leaved Helleborines and 6 of the rarer but visually far less impressive Green-flowered Helleborine at a junction of rides near a patch of mature beech woodland. The dull and drizzly conditions combined with the shady nature of the spot didn't help with light for photography but I did get the following shots.


Green-flowered Helleborine
Posted by Chris at 14:38 No comments:

The hottest day of the year with temperatures reaching 30 degrees had me heading up to Holt Country Park again. I seem to spend more time there now than I did when I lived in Holt because there was never much to see at the site back then!
My main quarry was Silver-washed Fritillary which have established a small population here over the last 3 or 4 years. Opinions are divided on whether they arrived here naturally or not but they are doing well and in a couple of hours I saw c20. With the high temperatures they were here, there and everywhere and it was ages before I saw one settled at all. Amazingly the only ones I saw settled for long enough to get any sort of photograph were a mating pair of which the female was of the very distinctive grey 'Valezina' form which was a first for me. White Admirals were also pretty conspicuous with about 10 seen whilst the day also yielded Small Skipper, Large Skipper, Common Blue, Large White, Red Admiral, Speckled Wood, Ringlet, Meadow Brown and Small Tortoiseshell. I also stumbled upon a single lingering Broad-bordered Bee Hawkmoth close to the woodland pond.
Holt CP is also known as the only East Anglian site for Keeled Skimmer and sure enough there were loads out in their usual spot. The pond in the same valley also had a couple of Ruddy Darters, my first ones this year.

A stop at Cley for a coffee had me watching several Spoonbills at distance on Billy's Wash before I moved on to Beeston Common, near Sheringham for my only other significant stop of the day. Here, despite precise directions the single Lesser Butterfly Orchid which was flowering just a week ago has completely disappeared! Carl Chapman and I had a thorough search and found the spot but no orchid. We can only hope it's not been cut or dug up and that an animal has eaten it instead. Luckily I saw it a few years ago and didn't make the trip specially for it! There were plenty of orchids about though with huge numbers of Marsh Helleborine, Common Spotted Orchids and Southern Marsh Orchids plus a smattering of Marsh Fragrant Orchids. A male Broad-bodied Chaser and a couple of Four-spotted Chasers were also around a small pool.