A couple of spare hours this afternoon was put to good use - I thought I'd check Weybread to see if any more migrants have arrived after a few days of warmer weather and a southerly airflow.

Despite the brisk and breezy conditions it was pleasing to note the return of Swallows in quite large numbers over the main pit. A quick go through the flock soon revealed smaller numbers of both Sand Martin and House Martin. Whilst this trio could have been predicted a single Pink-footed Goose on the meadows most definitely couldn't have been! Add a daytime hunting Barn Owl a bravely singing Willow Warbler, 3 Chiffchaffs, Kingfisher, 4 Egyptian Geese, 2 Oystercatchers and 2 Lapwings made it a very worthwhile stroll. Red-legged Partridge was also finally added to the list with a pair on the meadows.

The resident [Swan Goose] appears to be paired with a Greylag and while on the subject of dodgy wildfowl a very dark hybrid goose looking like it had both Barnacle and Brent Goose in it was also on the meadow. I'm going to scour the internet to see if I can determine it's parentage!

Little Grebe was trilling on the overgrown pond by the old workings and an early Common Whitethroat showed very nicely in the hedge along Watermill Lane. Despite checking a few likely spots I couldn't locate any Blackcaps yet.

Update - the hybrid goose appears to be a Red-breasted x Barnacle and looks like the same individual which has been seen at Strumpshaw Fen and Buckenham Marshes in 2011 and 2012. It appears to have wandered out of the Yare Valley! These photographs are by Will Soar 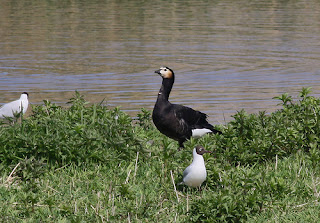 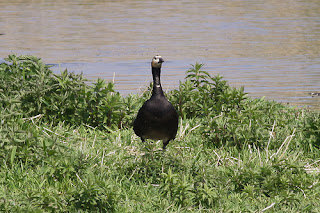