Day 2 began with a nice breakfast before we headed out into the field. The advantage of birding here is that you don’t need to be out at dawn! The Irish boys were heading up to high altitude today but on the grapevine we’d heard that a Danish birder had seen the Rosefinch in scrub near a church which is hidden behind the woods above our hotel. Naturally this was where we headed.


Heading up through the pine woods we clocked up 3 Coal Tits, Tree Pipits, Bullfinch, Goldcrest, Caucasian Chiffchaffs, Cuckoo, Ring Ouzels and several Crossbills before we emerged onto grassland between the wood and the towering crags to the east of the village. Scrub was noticeable in its absence however and despite much searching of the area we failed to find our target bird. We did add Common Whitethroat, 20+ Red-fronted Serins, Wren, 2 Whinchats, Crag Martin, Alpine Chough, Red-billed Chough, Golden Eagle, a calling Caucasian Snowcock  and a couple of Long-legged Buzzards before we headed back down to the village along the northern edge of the wood.
Tree Pipit, Kazbegi 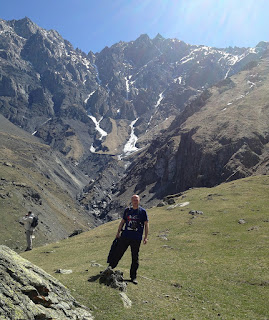 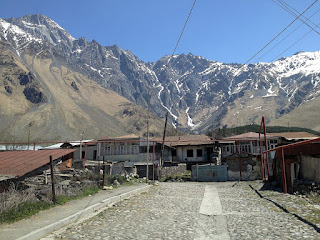 Kazbegi Village
In the centre of the village a small park near the museum yielded 2 Willow Warblers, Common Redstarts and an Ehrenbergs Redstart before we broke for some lunch. The woodland just over the main river bridge held more Crossbills (feeding young) and 2 Common Treecreepers (despite a dudey birding tour group claiming they were Short-toed!)

We spent the afternoon walking through the village heading south towards the obvious riverside scrub. En route, beside the main road a familiar call above our heads had us all looking up at a surprise pair of Waxwings. The nearby meadow and scrub gave us a lovely couple of male Common Rosefinches, Spotted Flycatcher, Red-backed Shrikes and more Caucasian Chiffchaffs.


Waxwing, Kazbegi
Moving over to the east side of the main road we eventually negotiated our way through gates and over ditches to a large area of scrub at the base of scree to the SE of the village. Working this thoroughly gave us nothing new but at last I found a Ring Ouzel which allowed me close enough to get some shots. By now we were pretty knackered but managed to drag ourselves across the grass towards to woodland again. Thankfully we were well entertained on the trudge as both Lammergeier (2) and Griffon Vulture (1) sailed past! Black Redstarts, Water Pipits and Northern Wheatears were typically everywhere. Back along a track in the pines a largish red-tailed bird flew up from the ground into the underside of a tree. After surrounding said tree it was eventually nailed as a Common Nightingale.

Other notable sightings during the day were 3 Red Squirrels (here being grey with the head and breast the only red bits), Camberwell Beauty, Painted Lady, Red Admiral and Small White.
The Irish boys had found Caucasian Great Rosefinch at high altitude above Sameba Church to the west of the village today so that had pretty much decided what our plan of action was for tomorrow!


They left their digs and visited our hotel for a beer or 2 later on and we all enjoyed an evening with good craic!
Posted by Chris at 10:25