Despite a plethora of drift migrants along the east coast over the bank holiday weekend I resisted the temptation to head straight to any of those this morning. Instead I opted for what I hoped would be a rather educational sparrow at Hungry Hill just east of Northrepps. With seed having been out out the bird in question was seen very quickly and is indeed very interesting! Personally I can't see anything in it's plumage that doesn't look like an Italian Sparrow. The only thing going against it is the location! The following photographs show that it has the classic chestnut crown and pure white cheeks of Italian with a very pronounced white median cover bar and chestnut median coverts. Another thing I noticed was that the black bib is very crescent shaped unlike any of the House Sparrows which all showed bibs in more of a blob shape. This isn't and id feature I've seen mentioned in literature but the illustrations in the Collins guide, the Helm Finches & Sparrows and the Poyser The Sparrows all show. The sides of the bib show a very small amount of chestnut mixed with the black but I have no idea what that could mean! So all in all a very interesting specimen. As I turned to leave I'm sure I head it call 'ciao' too!
A walk down into Overstand from Northrepps didn't reveal too much with 2 Northern Wheatears, Chiffchaff and a Painted Lady being the only migrants. Every buddlia bush seems to be covered in Small Tortoiseshells at the moment too with literally hundreds seen today. 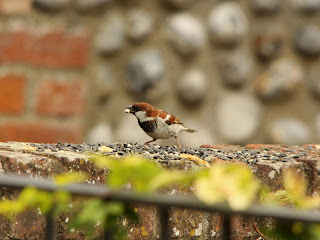 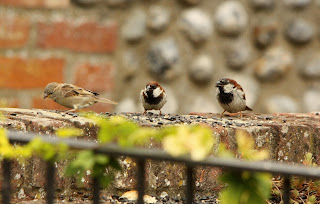 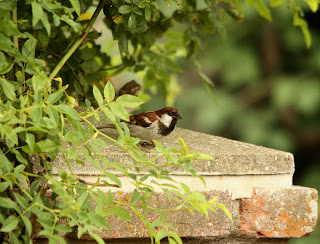 For a late afternoon stop we popped in to Salthouse to be greeted by the news that the Gramborough Hill Wryneck had effectively been lost a while ago. Luckily I managed to relocate it about 400 yards east of the hill on the back of the single ridge where it showed very nicely. Plenty of Whinchats there too with c5 seen together with a single male Stonechat and 3 Northern Wheatears. 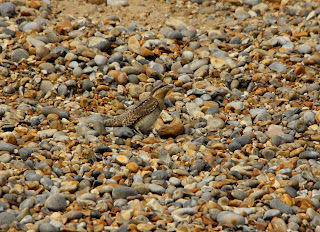 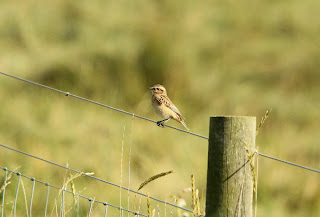