It's Christmas Eve so it seems like a good time to reflect on my birding year.

My British birding has been a little curtailed in 2013 which has been a year in which I think I've finally outgrown the whole twitching and UK listing thing. I've done my fair share of twitching in the past but this aspect of birding has become less and less attractive to me over the last few years. The huge cost of twitching these days and the fact that the vast majority of good birds are turning up in such far flung places have combined to put me off. I was never one to twitch the highlands and islands anyway.

Locally I've been doing bit and bobs when the mood and other time pressures have allowed me. Highlights for me have been the showy Thetford Black-bellied Dipper, the lovely Eastern Subalpine Warbler at Landguard in April, a month where an inland find of a Ring Ouzel on my patch at Weybread GPs got me excited anyway! Nightingales singing on a beautiful spring day in deepest Suffolk also lingers in the memory as does the long staying Red-footed Falcon at Lakenheath. My best find of the year was saved for June when a splendid Black Kite graced the skies over Brockdish. The 'Italian' Sparrow up at Northrepps was probably the biggest poser of the year while I also particularly enjoyed the Ouse Washes Northern Harrier (mainly due to how hard I had to work for it!), Red-flanked Bluetail and Pallas's Warbler on one great afternoon in east Norfolk and finally a dozen Parrot Crossbills up at my old stomping ground of Holt CP.

Foreign birding was once again to the fore, a trend which looks set to continue in the years ahead. With the cessation of my birding tours it was just 2 personal trips this year - Thailand in February and Georgia in May. The former was amazing and although not a full on birding trip I still managed a trip list of 214 with 132 lifers. Highlights are almost impossible to pick out of the array of great birds I saw but if I had to name a few they'd include Silver-eared Mesia, Mrs Gould's Sunbird, Pied Imperial Pigeon, Pygmy Cupwing, Chestnut-headed Tesia, White-browed Shrike Babbler, White-capped Water Redstart, Giant Nuthatch, Maroon Oriole, Silver Pheasant, Siberian Blue Robin, Large Hawk Cuckoo...

Georgia was also a great birding experience despite missing Guldenstadt's Redstart. With Great Rosefinch, Caucasian Snowcock, Caucasian Black Grouse, Lammergeier, Mountain Chiffchaff etc set against the stunning back drop of the mountains it's hard to complain!

So, what of 2014? Well, 3 weeks in Costa Rica in February is certainly something to look forward to... 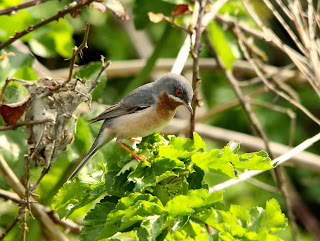 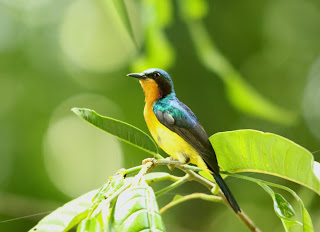