Having been unable to venture out over the weekend today was my first chance to get up to the East Norfolk coast for some of the waifs and strays that the weather has brought in over the last couple of days.
I made a beeline for Whimpwell Green, just inland of Happisburgh first and with a bit of patience managed some half decent views of the Red-flanked Bluetail which proved to be the trickiest one I've seen to get some views of. By leaving the small crowd and getting a different angle on things I managed to get some better views and even a record shot or two. A Pied Flycatcher was also a welcome addition to the days list. Plenty of grey-looking continental Robins around too and Redwings moving over in good numbers. 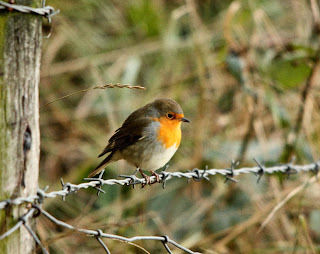 After grabbing some lunch in Sea Palling I made my way to Winterton for the afternoon. Walking the short distance to the totem pole in the North Dunes had me soon getting some lovely views of Pallas's Warbler with Goldcrests in birch scrub. I'd not seen one of these little beauties for a while so it was very welcome indeed. If only I could have got a shot of it! The bushes also held a couple of Chiffchaffs. A walk all the way north to the concrete blocks is best forgotten as all I managed was good numbers of Swallows moving south, 3 Stonechats and a Green Woodpecker! The flock of assorted redpolls had long since departed.
Odonata today was quite limited with Red Admiral, an extremely late Small Heath, Migrant Hawker and several Common Darters.
Posted by Chris at 19:19