After the enforced 'stay at home' due to the so called 'Beast from the East' which gave us c15 inches of snow in Pulham it was nice to finally get out today.
I headed into Norwich where I had other things I needed to do noting c15 Fieldfares feeding on berries in the village on my way out. After my chores I slunk off to a very slippery Whitlingham Lane.
Walking along past a frozen Little Broad I bumped into Dave Russell and soon after a small group of c12 Lesser Redpolls and c6 Siskin. I picked out a nice Mealy Redpoll amongst them but they quickly spooked and it was some while before we got them settled again up near the start of Great Broad. When they did I quickly picked out the Coues's Arctic Redpoll and it went on to show nicely. A quick stroll around the adjacent path into the trees and I flushed a most welcome Woodcock (a species that seems to have been suffering badly from the cold snap) before I turned my attention to the water. Eventually, Dave picked up the redhead Smew and I had a quick squint through his scope as I'd come out with just my bins. On the walk back I saw the Coues's Arctic Redpoll again, this time lower down and even better. A lovely frosty individual with just a single dark feather shaft showing on the undertail coverts. I watched it for a while with Dave Holman and David Bryant before leaving.
While visiting Mum and Dad a little later Jus rang to say the drake Mandarin was a Thorpe Green. I had a look on my way out of the city but couldn't find it. I walked down Girlings Lane to the old Norwich Union boat clubhouse and my hunch paid off as the Mandarin swam out from the bank of the River Yare near the railway bridge with some Mallard. A single Little Grebe was also there. 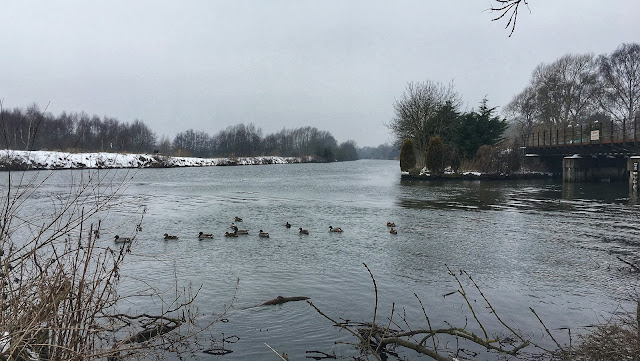 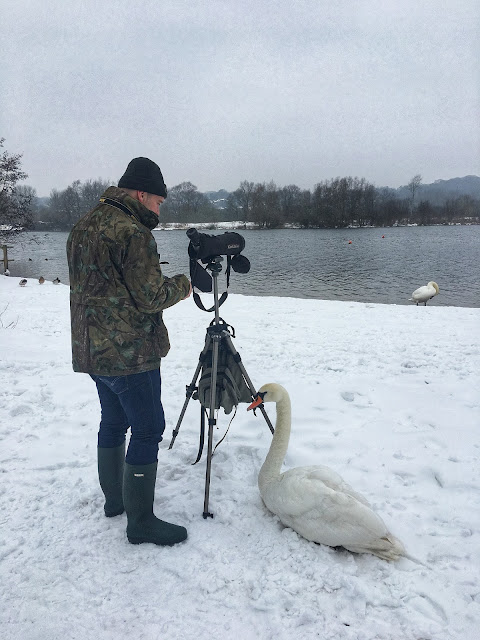 This Mute Swan wandered up to birders and just sat down. Obviously just needing some love in these frigid temperatures!
Posted by Chris at 17:59