We managed our first weekend away since lockdown this past weekend. Staying at a lovely Airbnb in Ludlow.

On the Friday we opted to start with a walk up the Carding Mill Valley on the Long Mynd. Avoiding the ridiculous NT carpark fee of GBP7 we walked up from Church Stretton as far as a small waterfall. There were far too many people for my liking but the further we walked the quieter it became. Things of note included some nice patches of Monkeyflower along the stream, Wild Thyme, Tormentil, a lovely Golden-ringed Dragonfly, Stonechats, Willow Warbler and 2 Ravens. 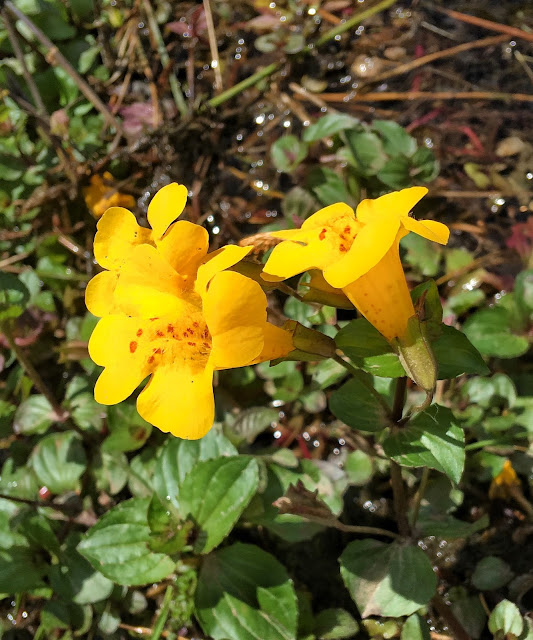 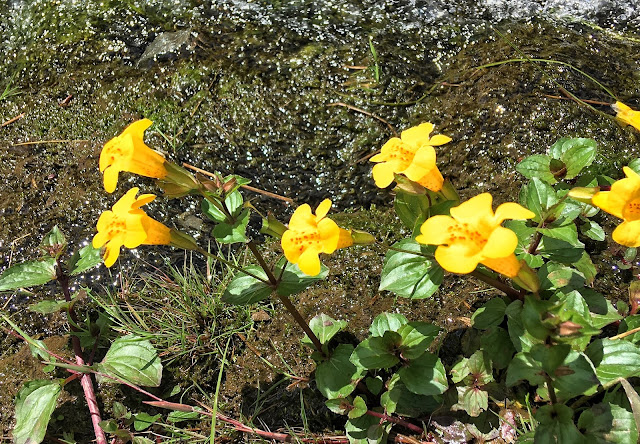 After lunch on the top of the Long Mynd with plenty of Ravens for company we drove over to the Stiperstones for an afternoon walk and scramble on the rocks. Here we picked Bilberries, and enjoyed being able to identify Western Gorse. Ravens were again in evidence. Nearby an old mining area known as The Bog gave me Grayling, Small Copper, Small Heath and Emerald Damselflies plus some quite robust Eyebrights and plenty of Harebells. 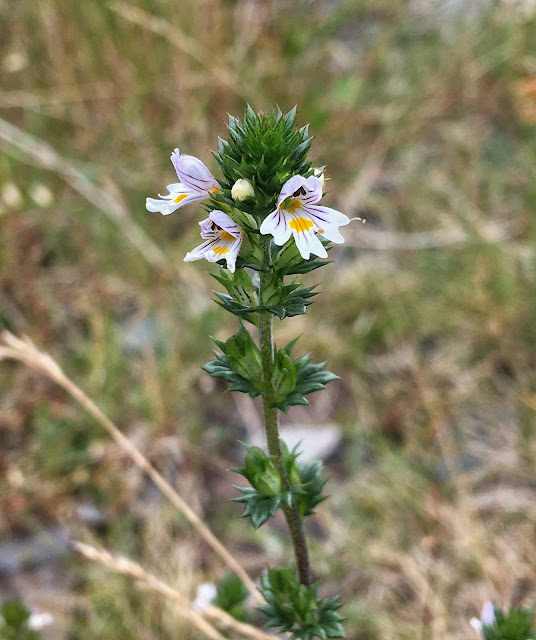 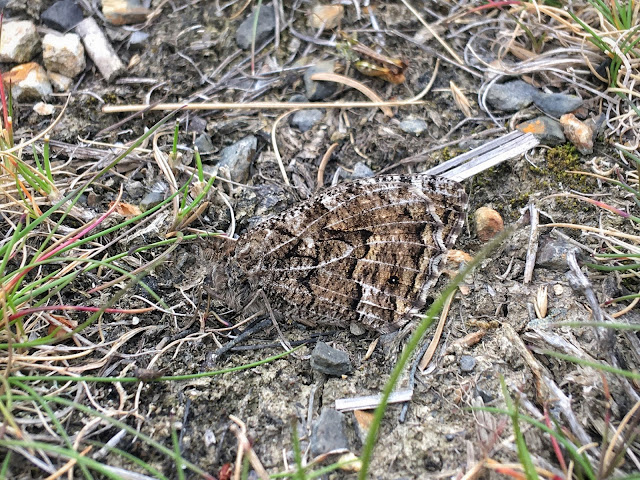 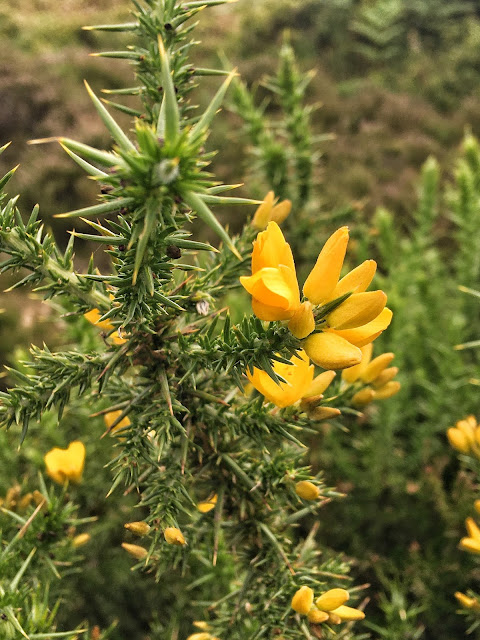 A quick walk to the Mitchell's Fold stone circle and a beer and wander around the quirky Bishops Castle rounded the day off. Back in Ludlow a Red Kite and a Peregrine were circling together over our accommodation.

We spent Saturday walking again - initially at Downton Gorge near Ludlow. Unfortunately there were loads of English Nature 'private, no public access' signs in evidence so exploration was curtailed a bit. Nevertheless we saw Dipper, Common Sandpiper, Red Kite, Common Buzzard and a couple of Southern Hawkers from the bridge. On the walk back I was pleased to connect with Feverfew, Enchanter's Nightshade and Broad-leaved Willowherb. 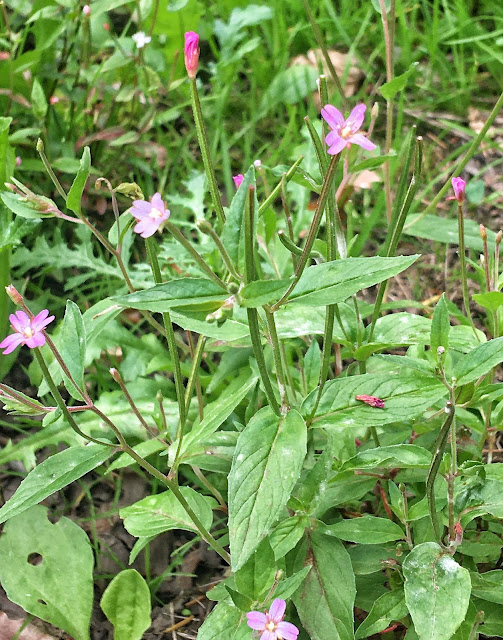 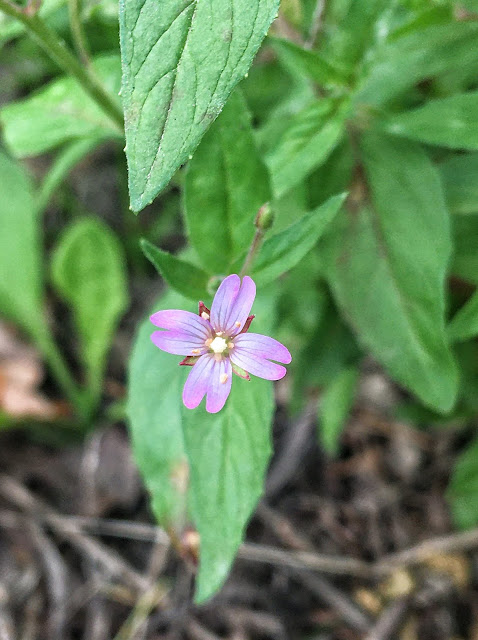 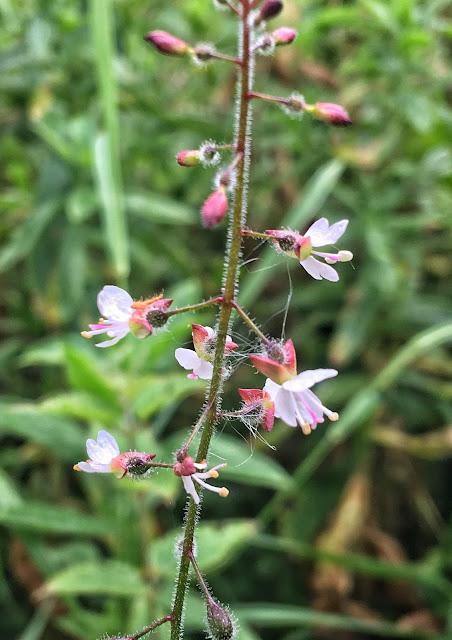 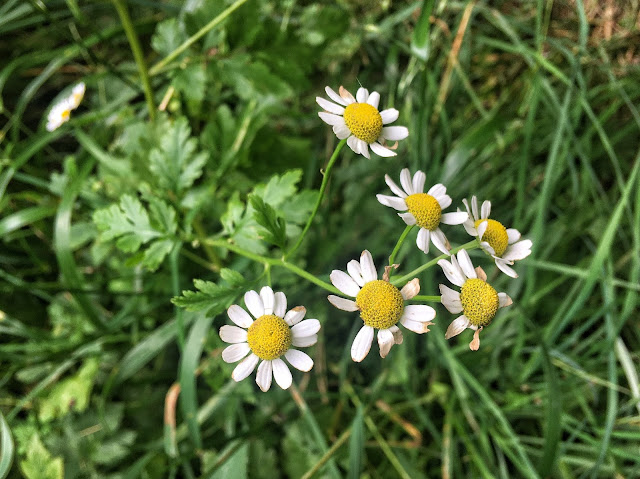 After a brief stop in Leintwardine for lunch we had a wander around Clun where I identified Pignut, Upright Hedge Parsley and Rock Stonecrop by the castle plus Trailing Bellflower in the village. Later, a walk along a nicely intact section of the Offa's Dyke had us picking Wild Raspberries. A couple of Bifid Hemp Nettle plants were also along the path. Tansy, Marsh Woundwort and Redshank were also seen during the day. 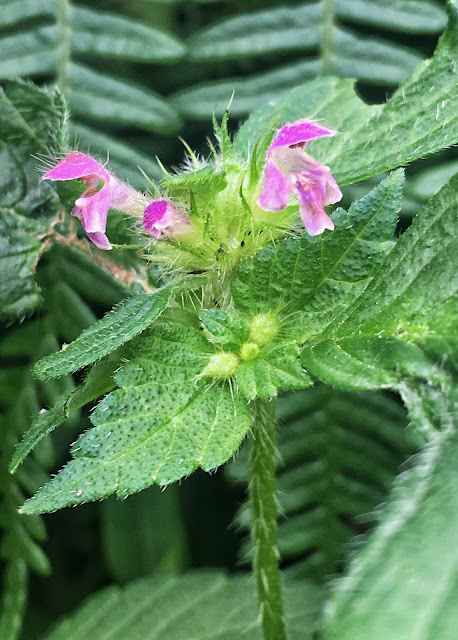 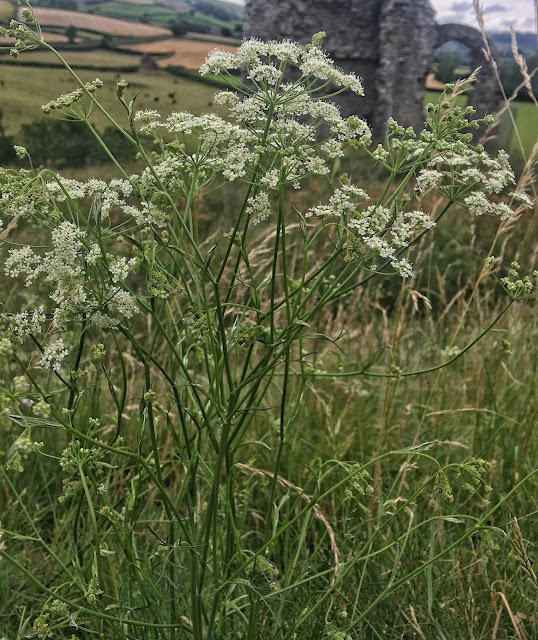 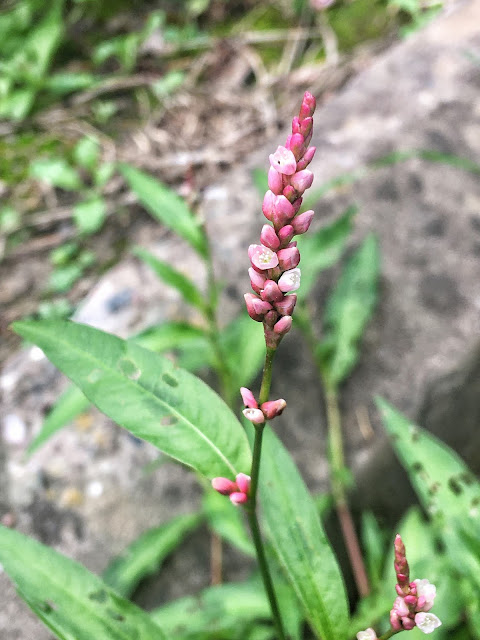 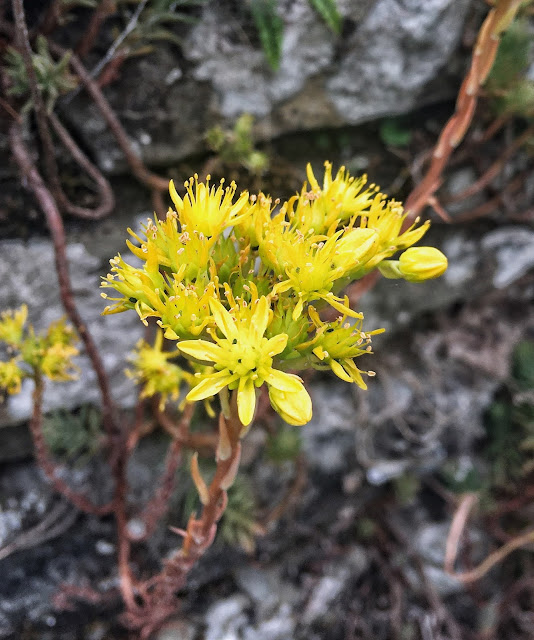 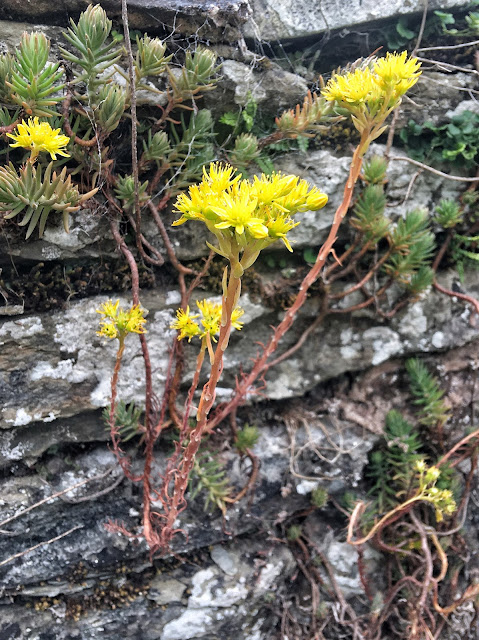 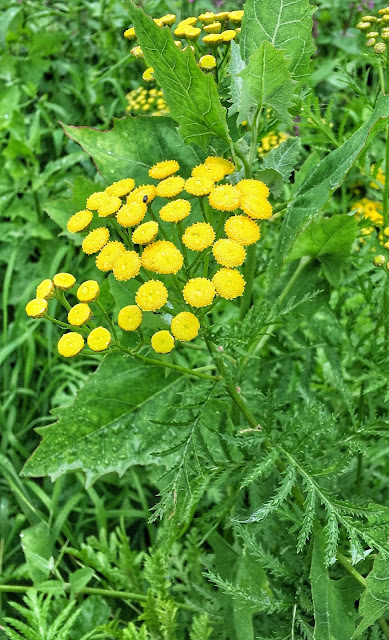 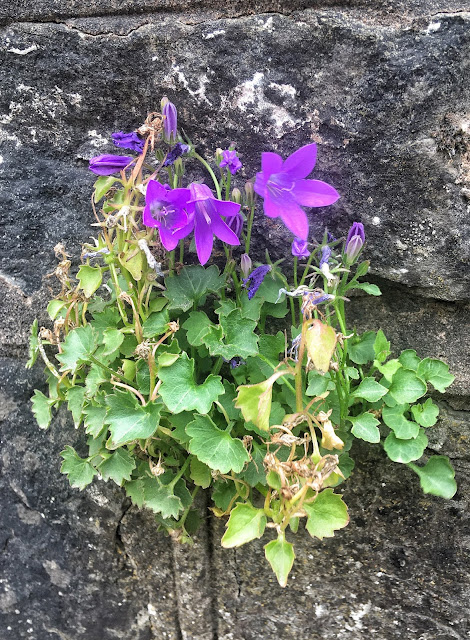 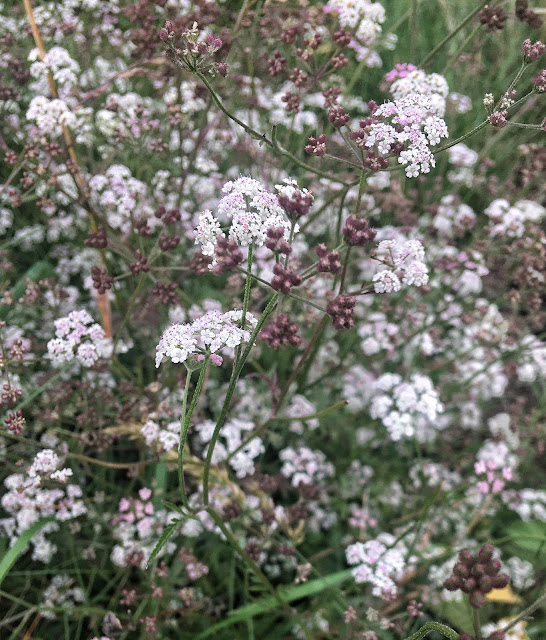 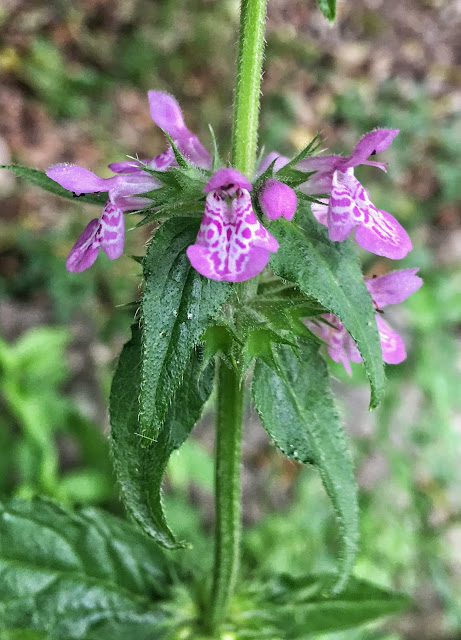 Marsh Woundwort
Posted by Chris at 14:03