Quest for an English Chequered Skipper, 25 May 2020

This story began as a quest to see my last British butterfly, the Chequered Skipper. Belinda and I had booked a holiday cottage in Scotland for this week with that being my main aim. I don't need to tell you that our plans had to be cancelled due to the ongoing virus crisis. This left me high and dry and hoping that 2021 might be the year I completed my butterfly list instead.

Then I had a thought - what if I could find a Chequered Skipper nearer to home now we are allowed to travel a bit more? I knew that the species was subject to a reintroducation scheme in the Rockingham Forest in Northants in 2018 but much searching of the internet just kept coming up with the phase 'at a secret location in the Rockingham Forest'. Those familiar with that area will know it consists of a vast area of scattered woods, the remnants of a much larger tract of ancient woodland now confined to history. The species used to occur here of course but became extinct in England in 1976. So, I kept delving and over a period of days narrowed the possibilities down to 3 woods. It seemed like a tall order to find one but having looked in detail at each of the woods I knew which one I thought I'd start with.

So, yesterday, my 55th birthday was earmarked for a day out in the area and checking all 3 woods if necessary! The weather was perfect but as we neared the location I recall saying to Belinda that I rated our chances as less than 10%. In the woods for about 20 minutes we bumped into a retired husband and wife sporting binoculars and got chatting in a socially distanced way. And confirmation from them that we were in the right wood was music to my ears! Nevertheless, despite them living nearby and being regular visitors they'd never seen one. My brief surge of optimism promptly plummeted! We bid them farewell and resigned ourselves to looking for the rest of the day if need be. Exploring a likely looking ride we met 2 other people doing the same as us but everyone was secretive and furtive and it was winks all round without the species ever being named. So, we kept on looking, walking ride after ride in the hot sun and seing nothing but Small Heaths and the odd Dingy Skipper. We decided to head back to the car for water and some luch and to re-group. On the way back we bumped into the Butterfly Conservation Project Officer for Rockingham Forest who gave me a bit of a grilling as to how we knew where to be - her face! lol! A rather out of place female Scarce Chaser was seen very well on the way back which lifted the spirits somewhat.

After lunch we decided to dive back into the woods for 'round 2'. Walking the same rides again, in particular one good looking ride we still had no luck. Then, as we walked Belinda was a few meters in front of me and called 'what's this flying?'. The specimen in question settled briefly and I swore - badly! It was a Chequered Skipper!! In the next 10 minutes or so we kept tabs on it, it was always flighty but settled at ground level along the same 20 meter stretch of the ride several times allowing me to get some photographs as proof. It always settled with its wings shut. I was absolutely buzzing, it was the best birthday present ever! We even managed to complete the scarce skipper set with a Grizzled Skipper a short while later.

As a postscript - the  Butterfly Conservation Project Officer has since confirmed to me by email that she failed to find any on her transect. 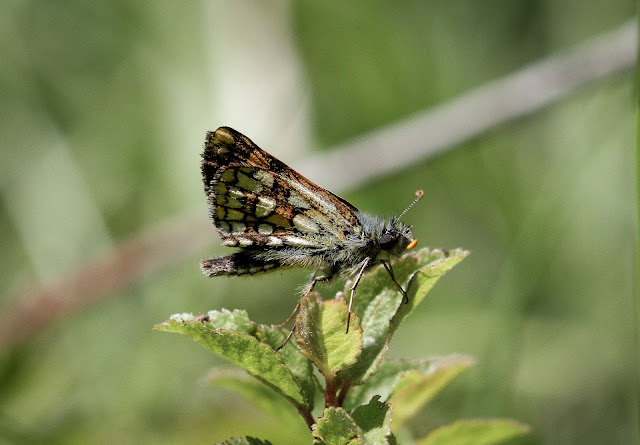 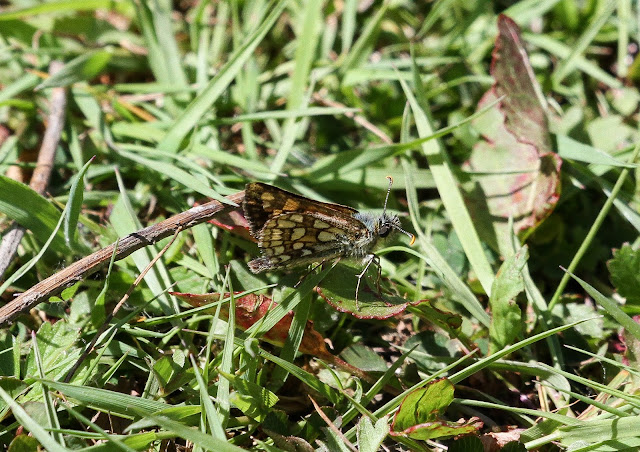 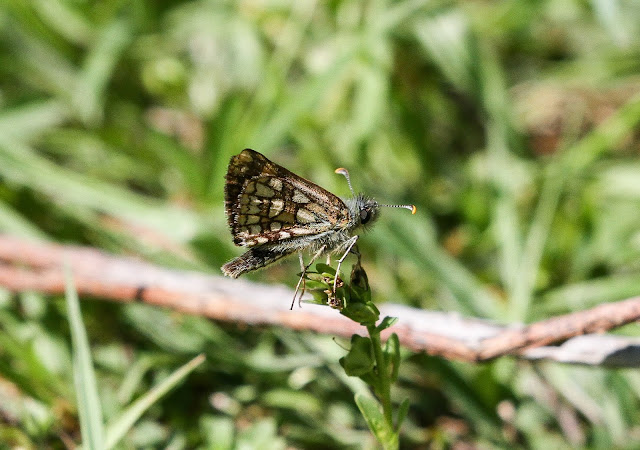 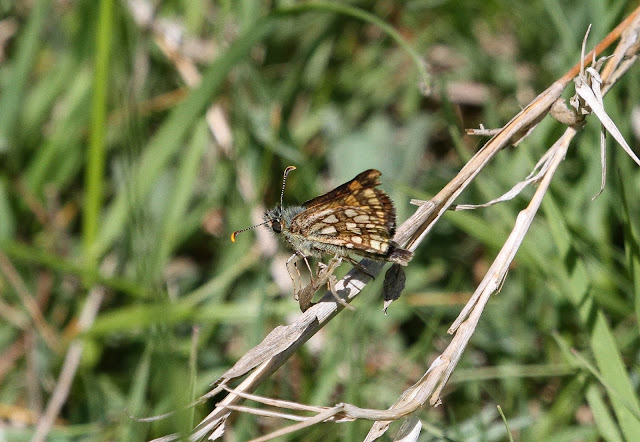 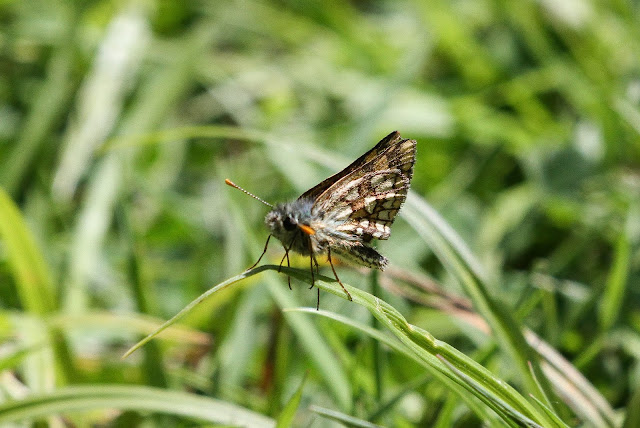 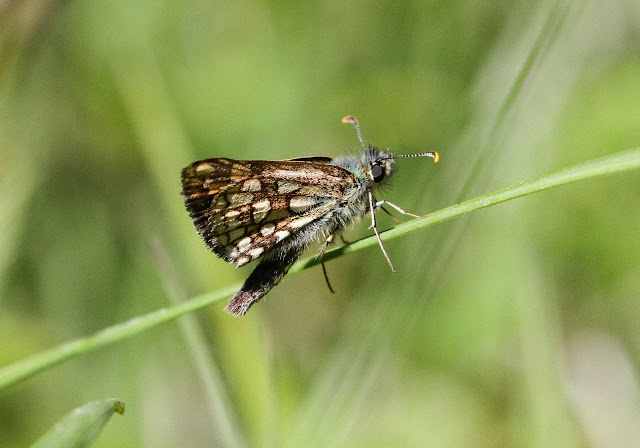 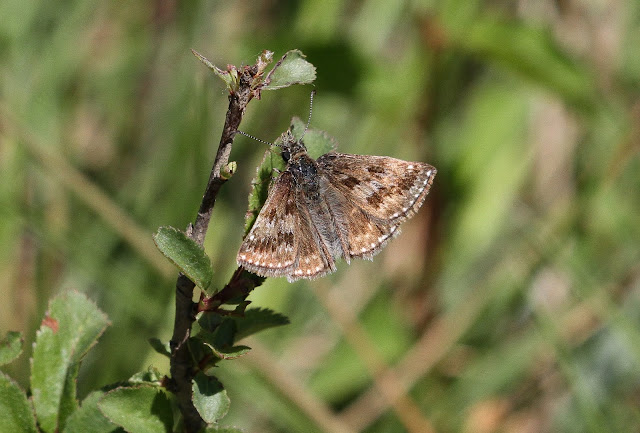 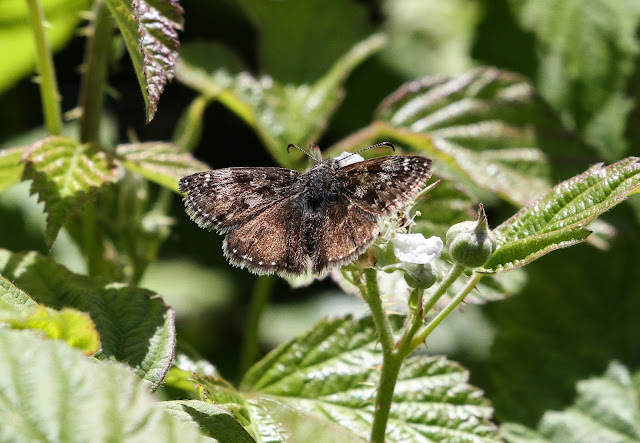 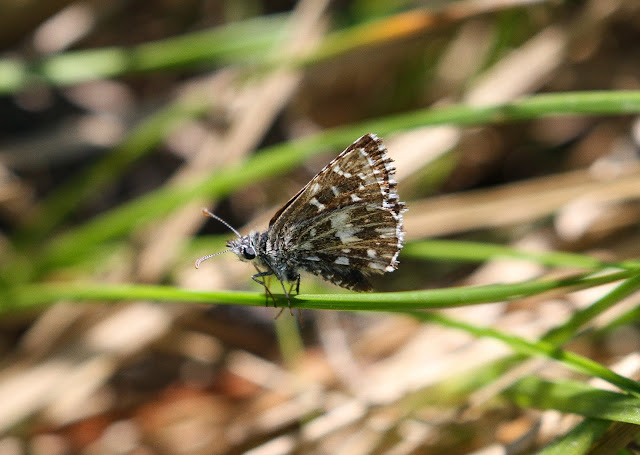 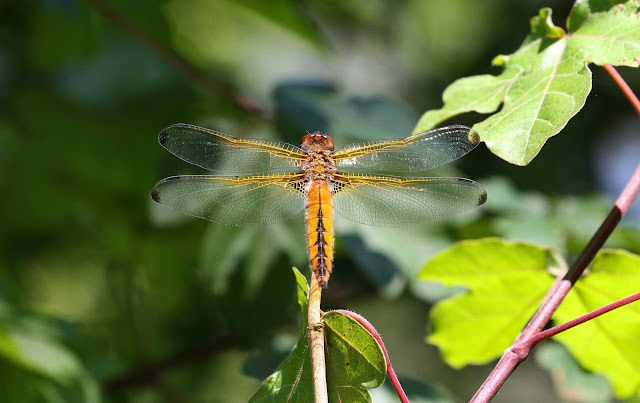 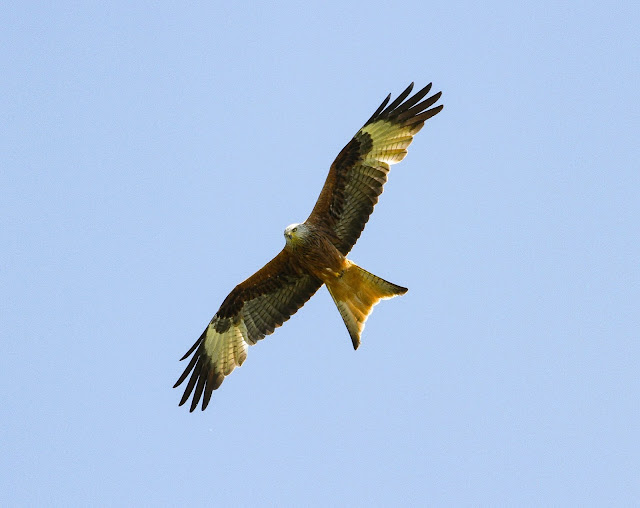 Whilst in the area we also visited a couple of other sites a few miles distant, one of which I'd never been to before - Bedford Purlieus. A twitter friend had very kindly given me directions to both Fly Orchids and Birdsnest Orchids and thanks to him we fond both easily. Also there some rather splendid and scarce wild Columbine was growing in a clearing and the dark and sinister Deadly Nightshade was a new plant for me. As was Yellow Pimpernel. Some Common Gromwell, Common Blue and a faded Orange Tip were also photographed in the rather gorgeous woods. 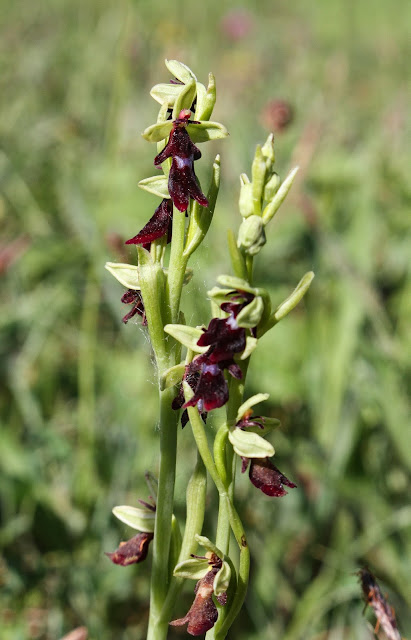 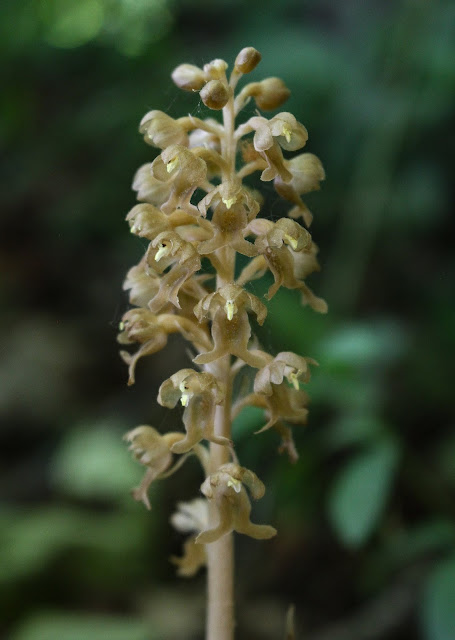 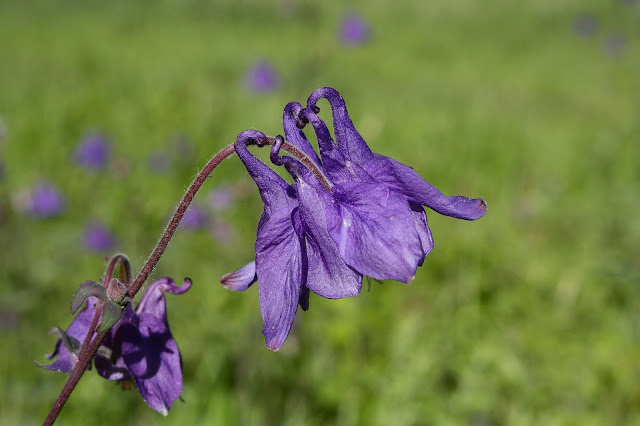 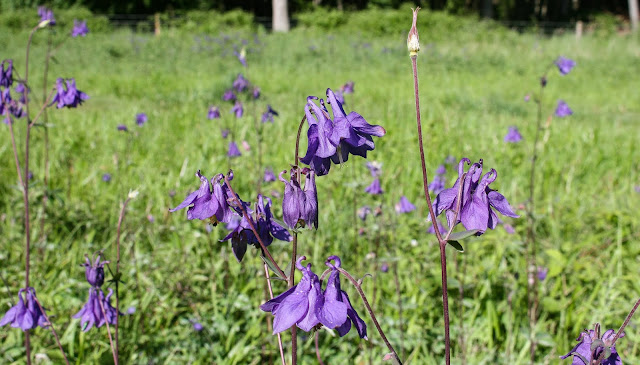 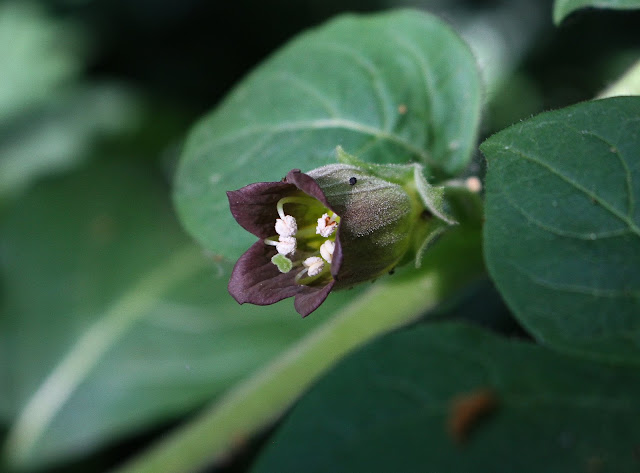 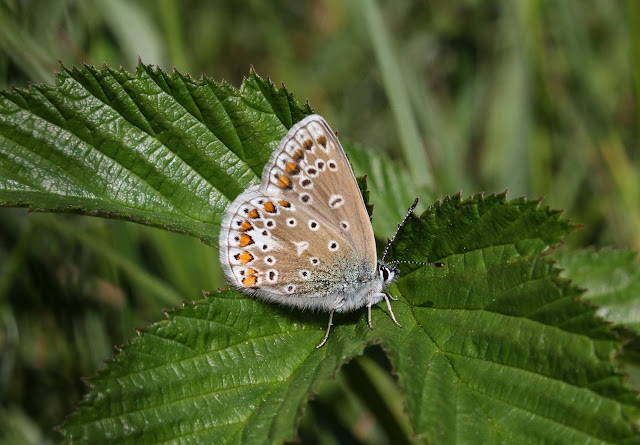 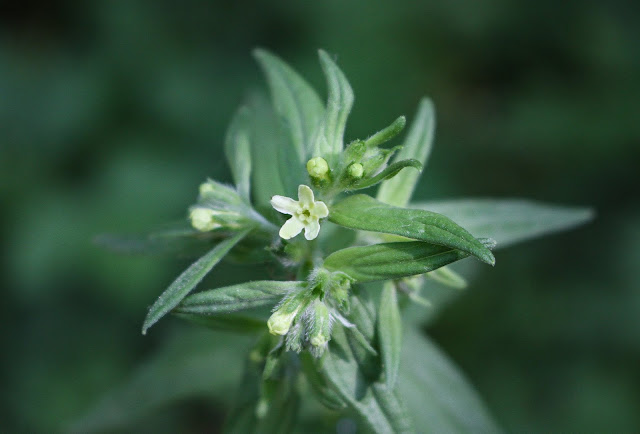 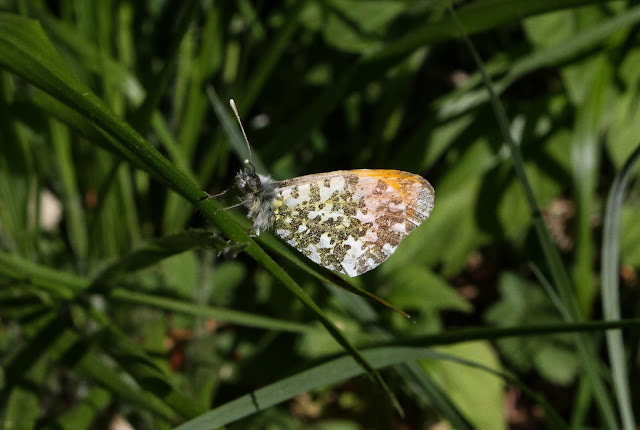 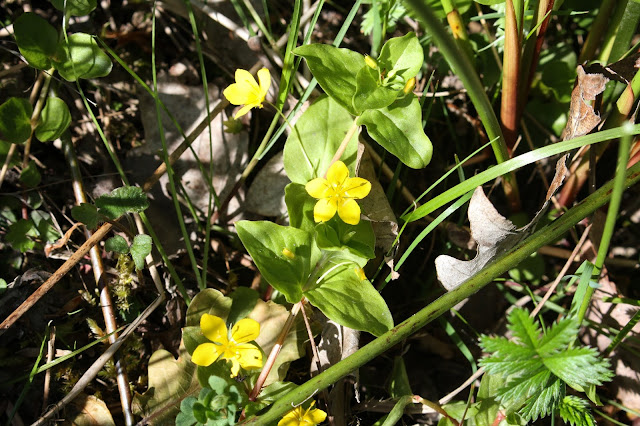 We also made a flying visit to Barnack Hills and Holes where loads of Pasqueflowers were a delight  another Red Kite sailed over, we found one small patch of Common Milkwort, Common Rock Rose and some Hounds-tongue. 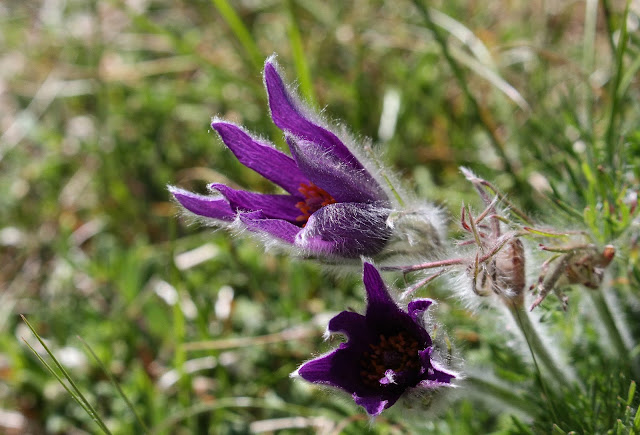 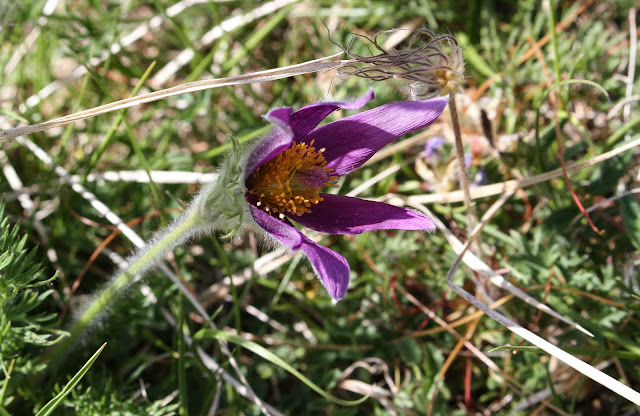 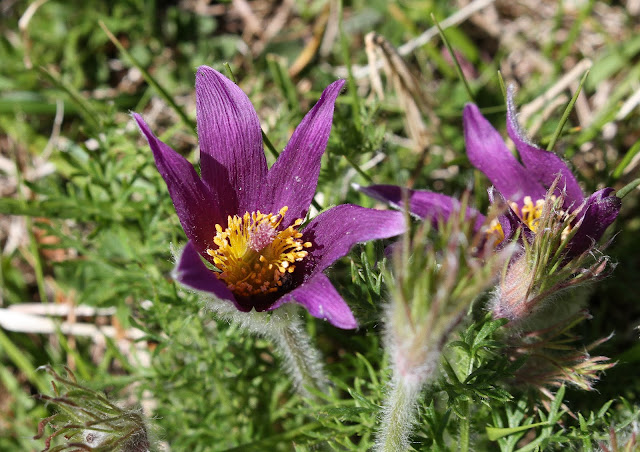