If the first 2 days could be described as a gentle introduction to birding in Goa today was the day it became serious! We were off for a 3 day/2 night stay at Backwoods Camp deep in the wooded hills of the Western Ghats.
We were picked up at 05.30 and taken on the 2 and a half hour drive in the darkness and thick fog to the remote camp. Despite a brief stop in Panjim to pick up another passenger and another for a passenger feeling carsick we still got to the camp by dawn! The general plan of action at Backwoods is to rise early for coffee and biscuits, bird for a couple of hours and then return for breakfast. After breakfast more birding until lunchtime after which there is a 2-3 hour break in the heat of the afternoon before venturing out again in the late afternoon until dusk. All meals are included which are tasty and nutritional without being haute cuisine. The emphasis is on fresh local ingredients and things are largely vegetarian. There is a bar where you can buy your own beer, water, soft drinks and spirits.

After introductions we were split into 2 groups in which we'd remain for all our birding. In our group were Miles and Kate Shepherd, Maureen Davies and an American lady called Sharon. Our guide was the main man at Backwoods, Leio. He proved to be an excellent and affable guide and his services and that of the camp cannot be praised highly enough.

Our first walk out of camp started with 2 Flame-throated Bulbuls and a White-rumped Shama as the birds came thick and fast - Asian Fairy Bluebird, Pompadour Green Pigeon, Large-billed Crows, Spotted Dove, Asian Paradise Flycatcher, Rufous Woodpecker, 2 Brown Shrikes, Orange-headed Thrush, several Red-whiskered Bulbuls, 2 Jungle Babbler, Nilgiri Flowerpecker, Little Spiderhunter, Grey-headed Bulbul, Oriental Magpie Robin,several Crimson-backed Sunbirds, 15+ Chestnut-shouldered Petronia, Greenish Warbler and several Blyth's Reed Warblers and Western Crowned Warblers both of which are common wintering species. The endemic Malabar Parakeet was also obvious with several sightings. Before walking back Leio menationed the presence of a Besra in the open area by the end of the access road and sure enough we were soon watching it in a bare tree some 150 meters away. Back at camp later in the morning I found Common Iora and Asian Brown Flycatcher and then we were told about the small ditch by the camp kitchen. Allowing close approach here were a superb Malabar Whistling Thrush, Indian Blackbird and Orange-headed Thrush while a Tickell's Blue Flycatcher lurked in the background. 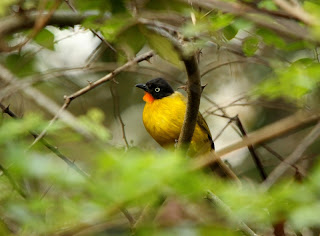 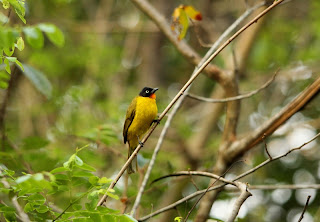 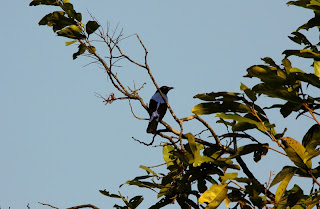 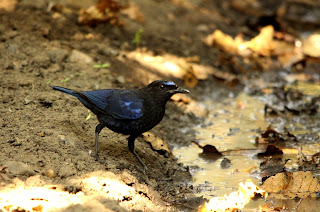 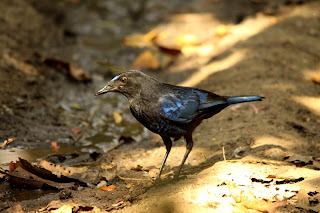 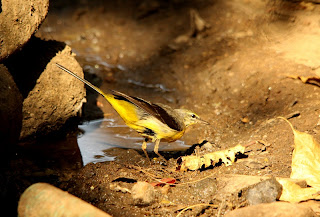 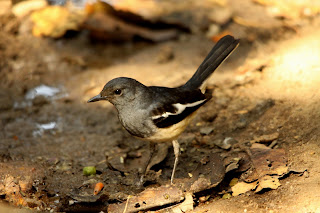 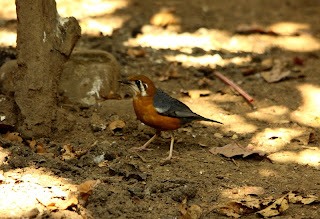 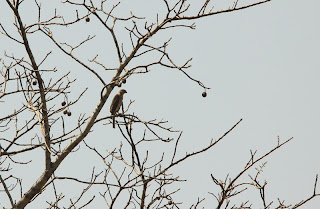 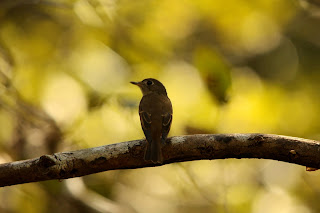 Asian Brown Flycatcher
After lunch we explored the area immediately around the camp buildings and Leio was able to take us right to a fantastic pair of roosting Sri Lanka Frogmouths! This would only be possible with a guide who really knows his stuff. Just outside the camp gates a less than obliging Black-naped Oriole finally showed itself and we soon added Greater Racket-tailed Drongo, Blue-winged Leafbird, Bar-winged Flycatcher Shrike, Crested Serpent Eagle, Oriental Honey Buzzard and more Orange-headed Thrushes. 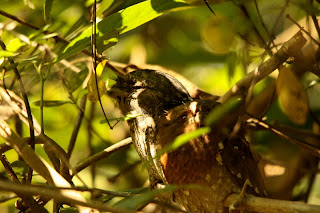 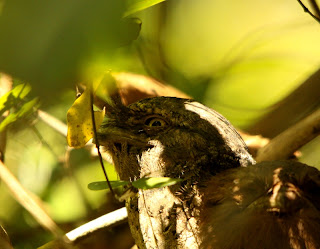 Sri Lanka Frogmouth
Our afternoon/evening walk was from the carpark at the Tambdi Surla Temple where we enjoyed some nice views of Yellow-browed Bulbul and c4 Asian Fairy Bluebirds en route to the temple. Here we loafed around on the benches scanning the skies and surrounding trees. Amongst the Indian Swiftlets overhead we picked out Dusky Crag Martin, Streak-throated Swallow and best of all a distinctive Crested Treeswift. A distant Black Eagle was viewed briefly before disappearing from view while 3 Mountain Imperial Pigeons, c10 Pompadour Green Pigeons and a couple of Vernal Hanging Parrots flew over. Another endemic - the recently split Malabar Barbet was picked out in the treetops and on the edge of the open area we then got onto an amazingly coloured Blue-capped Rock Thrush which blew everyone away! Leaving the temple we walked back to the bridge by the carpark and despite missing Blue-eared Kingfisher we enjoyed some good views of Brown-breasted Flycatcher on the rocks in the river.
On the drive back to the camp in the gather gloom we then had a stroke of luck in the form of a lovely Indian Pitta running around on the road in the car headlights. What a way to end a day where I'd had no fewer than 49 lifers! 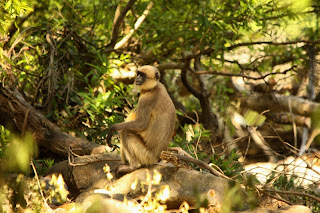 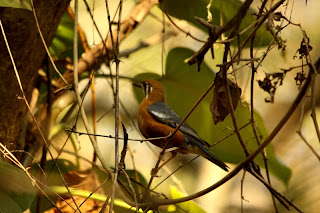 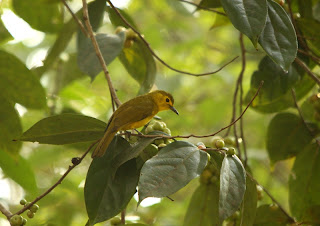 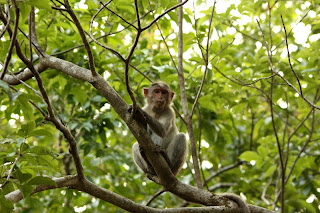 Bonnet Macaque
Posted by Chris at 21:37