Our 2nd full day at Backwoods and a slight change of routine. Due to a longish walk today it was an early full breakfast and straight out into the field. The plan was to drive as far as the Tambdi Surla temple and then walk upstream from there exploring the woodland, rocky river and side streams.
After a Shikra by the camps gate our walk took us through some dry open woodland initially and it was here we got some lovely fly-by views of a pair of stunning White-bellied Woodpeckers that responded to tape well. 2 Square-tailed Black Bulbuls were rather less obliging, only showing briefly. Along the trail we picked up several Dark-fronted Babblers, Brown-cheeked Fulvettas, Western Crowned Warblers and a Nilgiri Flowerpecker before some more diligent use of the tape by our Leio tempted Indian Blue Robin into view. We eventually had 3 of these skulkers including a splendid male that we coaxed out along a side tributory. Close by we then enjoyed the antics of a white male Asian Paradise Flycatcher. These birds just don't look real! Our main target bird was proving elusive however, that was until an eagle-eyed Leio picked one out and with hushed tones we all gathered to watch a sitting Oriental Dwarf Kingfisher. The light wasn't great and the distance a little too far so my shots are definitely in the 'record shot' category! Shortly after this we stopped for a break in a clearing and while sat on the flat rocks I got on to 2 huge Great Hornbills flying above the treetops in the valley.
Continuing our walk back along the course of the river we had several Grey Wagtails, Malabar Grey Hornbill, Common Kingfisher, Malabar Parakeet, Flame-throated Bulbul and a circling Crested Serpent Eagle before we emerged by the temple again. 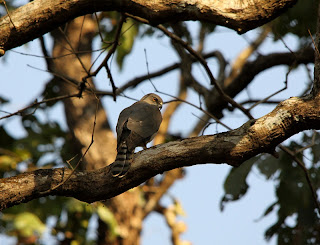 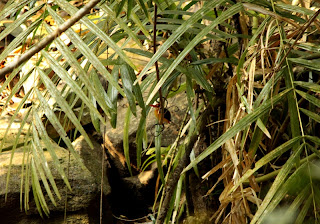 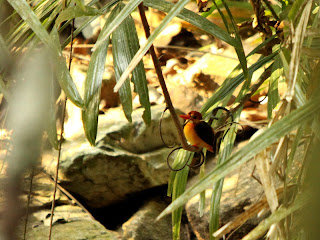 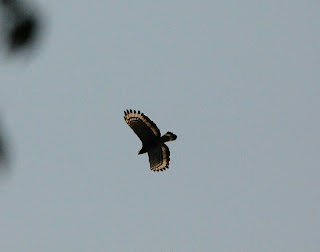 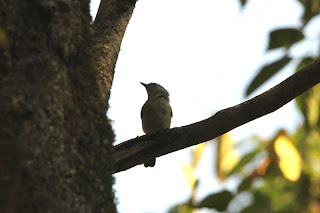 Brown-cheeked Fulvetta
During our early afternoon siesta we had Black-naped Monarch, Asian Paradise Flycatcher, Blyth's Reed Warbler, Indian Blackbird, Oriental Magpie Robin and Malabar Grey Hornbill from our balcony!
Spending some time at the temple in the late morning and again in the afternoon proved a very good call. We had some amazing close views of Blue-capped Rock Thrush, 2 Mountain Imperial Pigeons, Pompadour Green Pigeon, 5+ Chestnut-headed Bee-eaters, Indian Swiftlets, Little Swifts, Malabar Barbet, 2 Malabar Pied Hornbills and 5+ Small Minivets. As we tracked a Greater Racket-tailed Drongo into a large copse we stumbled upon one of the birds I'd really wanted to connect with -   a marvellous pair of Velvet -fronted Nuthatches. At the bridge we finally scored with the hitherto elusive Blue-eared Kingfisher plus Stork-billed Kingfisher and Malabar Whistling Thrush. 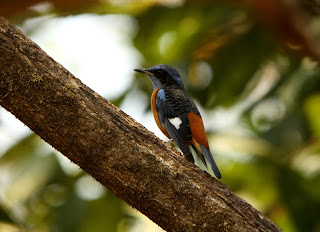 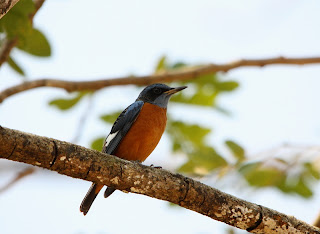 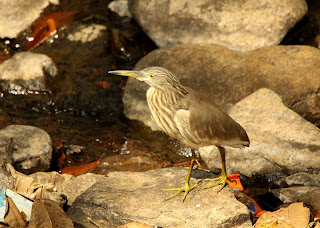 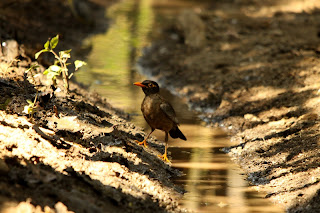 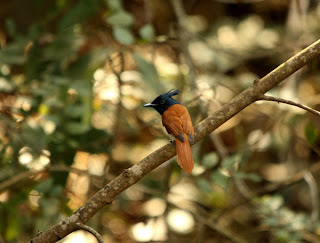 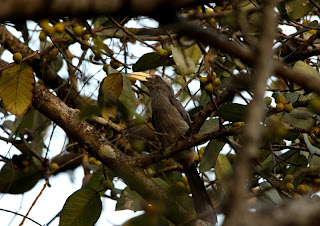 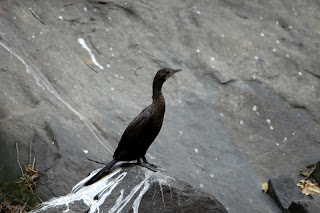 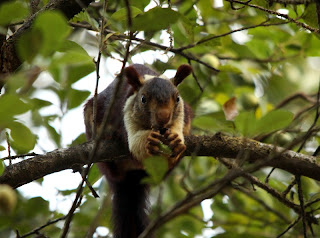 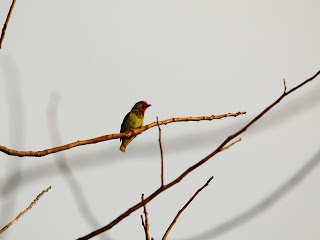 Malabar Barbet
The day wasn't even over as the light began to fade. A stop along the road at a favoured spot gave us our 2nd Indian Pitta before we joined the other group at a roadside football pitch where yet another Indian Pitta was running about with an Orange-headed Thrush and then a Jerdon's Nightjar gave in to the tape and flew over our heads to settle on a low branch and give great views by torchlight. On the drive back to the camp Leio happened to stop and scan some telegraph wires with his torch to reveal a superb Brown Hawk Owl staring at us. This man really does know where the birds are!
Posted by Chris at 10:17