A self-imposed early morning start today as I was keen to get out and do a short walk before returning for breakfast. A walk along the main access track initially produced 4 Malabar Grey Hornbills and both Malabar and White-cheeked Barbet. We then retraced our steps and walked down past fields close to our accomodation and dropped down through some lush woodland to a stream. Long-tailed Shrike was one of the next birds seen followed by White-breasted Kingfisher and a noisy group of Jungle Babblers. Entering the wood we could here woodpecker noises and eventually tracked it down to a lovely and unexpected Streak-throated Woodpecker on an old dead bamboo clump. Moving along the track through the wood there were Blyth's Reed Warblers, Large-billed Crows, Brown-cheeked Fulvettas, Asian Paradise Flycatcher and a nice White-rumped Shama before a strange call alerted my attention. With a bit of patience a splendid pair of Indian Scimitar Babblers showed nicely, what a bird these are! Down by the stream we were then amused by the sight of a Greater Coucal chasing a White-breasted Waterhen which had obviously caught something. On the walk back Spotted Doves were obvious. 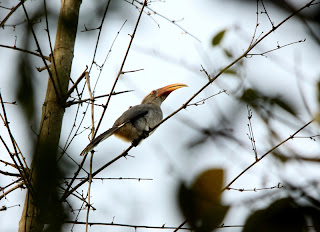 Malabar Grey Hornbill
After breakfast and then a lazy lunch we chilled around the garden enjoying the antics of 2 Golden-fronted Leafbirds and White-cheeked Barbet in our fuiting tree and then a beautiful Oriental White-eye in low bushes right in front of us. A Greater Spotted Eagle sailed over as did an Oriental Honey Buzzard. We went on a long sweaty walk after lunch over the other side of the stream we'd been to earlier but in the heat of the day things were quiet. We did add Green Warbler to the list as well as Purple and Purple-rumped Sunbird, Yellow-browed Bulbul, Asian Koel and were then entertained as a Shikra sped through a group of Jungle Babblers causing mayhem! 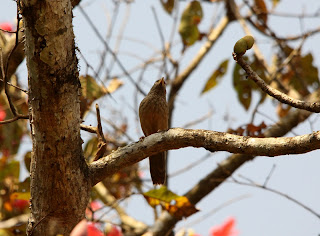 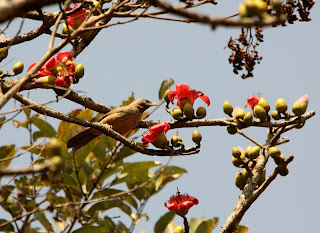 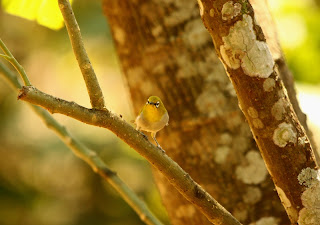 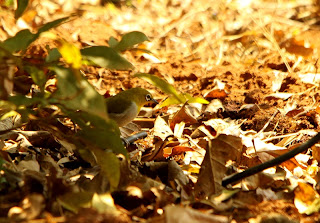 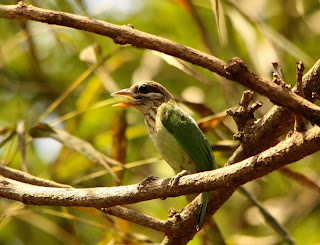 White-cheeked Barbet
Our evening walk with David was a hike up his self-named Bear Hill which has a claim to fame of being the site that his daughter Katrina has discovered a new species of red crab that lives in the cracks of the rocks on the summit and survives on water from the rains. Birding was slow with c10 Pompadour Green Pigeons, Malabar Barbet and White-cheeked Barbet being the highlights of the walk up. Near the top a brief view of a skulking Red Spurfowl was had and an Orange-headed Thrush showed. The view from the top was spectacular however which was more than can be said with the very brief and rather unsatisfactory view I got of Forest Wagtail on the way down! After a detour so Belinda could see the tribal village on the way back the regular female White-bellied Woodpecker was again going to roost in her hole.

After dinner Katrina showed us a couple of Tarantulas at the entrances to their holes - awesome! 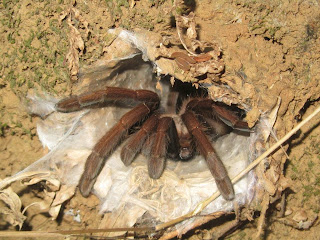 Tarantula
Posted by Chris at 22:56