The birding ramped up considerably today - the first day of 3 days at Doi Inthanon with just Belinda and I. Our hire car was delivered to our hotel (The Grand Napat) in Chiang Mai and I made the easy drive south to Doi Inthanon, the summit of which is Thailand's highest mountain. Birding here covers a superb variety of habitats at various elevations along the 49km road to the summit. Driving the wide and paved road is easy except for some of the steeper bits which the automatic hire car didn't like very much!
Entry to the national park is 200 baht per person plus 30 baht for the car which we had to pay each day as we'd opted to stay at the Doi Inthanon Highland Resort which is just outside the park.
Whilst planning the whole trip I'd been quoted ridiculous prices for guided birding at Doi Inthanon one of which claimed the entrance fee was 500 baht per person. A genuine mistake or an attempt to make more money out of unsuspecting visitors? Who knows.
Anyway, the site is easy to bird yourself because all the birding hotspots are by marked km posts. Finding the birds is the only problem you need to worry about!
The map below is available from Mr Deang's Bird Centre at km31. For anyone wanting a better copy I'm more than happy to email one. 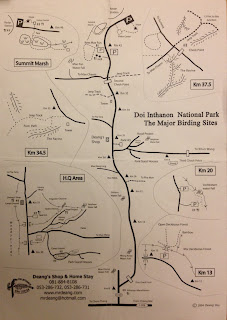 Just before we turned off the main road toward the park a Crested Treeswift kicked things off nicely and after paying our entrance fees at the checkpoint we decided to make our first port of call the Wachiratarn Waterfall at km20. Despite being a spectacular waterfall the number of visitors at this time of day meant the birding wasn't as hoped. Even though I had some nice views of Blue Whistling Thrush, 2 Grey-headed Canary Flycatchers and a Grey Wagtail. 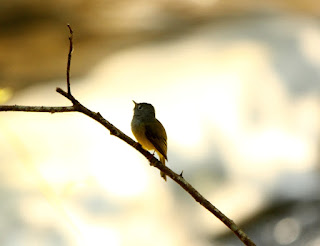 Grey-headed Canary Flycatcher
A brief stop at the Siritarn Waterfall was a waste of time (due to large numbers of people and restricted viewing from a platform with nowhere to walk) so we decided to shun the crowds and head for a walk along one of the birding sites - the jeep track at km34.5. But not before a stop for coffee at Mr Deangs where I ticked a male Fire-breasted Flowerpecker from his balcony. Km34.5 proved a good choice as the birds began to flow - a superb male Snowy-browed Flycatcher started things off and was quickly followed by 2 Verditer Flycatchers, Hume's Warbler and the first of 3-4 Brown-throated Creepers. Woodland birding in Thailand can be hard work so I decided to walk just off the track, stand still and see what came to me. A tiny bird was obviously feeding close by on the ground in thick vegetation but after much staring a flash of yellow and chestnut confirmed it was a Chestnut-headed Tesia. A male Grey-chinned Minivet, 2 Grey-cheeked Fulvettas and my first Yellow-cheeked Tit followed. 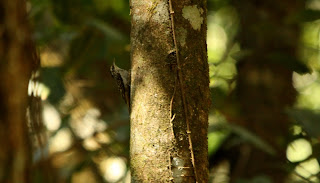 Brown-throated Creeper
By now we needed food so stopped at the large restaurant come cafe next to the park HQ for a green curry and an iced coffee.
I was itching to get to the summit area which is something I'd planned for dawn tomorrow but the despite the time of day the lure was too much and we headed up there next.
Making a beeline for the famous summit boardwalk I wasn't disappointed. This strange site is, as others have said, like something out of Lord of the Rings with mist swirling and spanish moss hanging from all the trees around the wooded marsh which is set in a hollow. Rufous-winged Fulvetta was immediately obvious and walking the boardwalk slowly I notched up female Green-tailed Sunbird, Eastern Crowned Warbler, c6 Chestnut-sided White-eyes, 2 Japanese White-eyes, Chestnut-tailed Minla, 2 Dark-backed Sibia, a motionless Woodcock and a Yellow-bellied Fantail. I looked forward to returning in the morning! 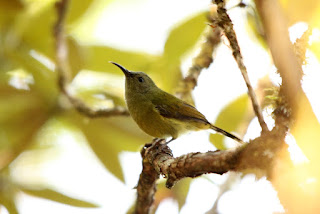 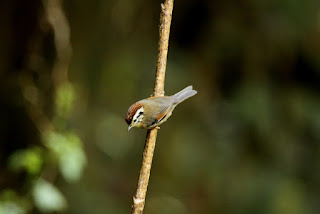 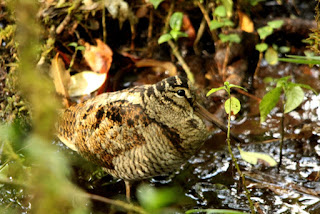 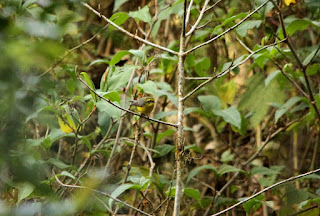 Yellow-bellied Fantail
With just a little of the light left Belinda fancied a visit to the Chedi which are 2 adjacent conical temples a few km down from the summit. From a birding and photography point of view it was an excellent call. The scubby slope on the edge of the gardens came up trumps with mega views of both Buff-throated Warbler and Hill Prinia and then the edge of the gardens themselves yielded up front and personal views of Dark-backed Sibia, 3 Chestnut-crowned Laughingthrushes, 2 Chestnut-tailed Minla, 2 Common Rosefinch and in the last rays of sun a female Green-tailed Sunbird. 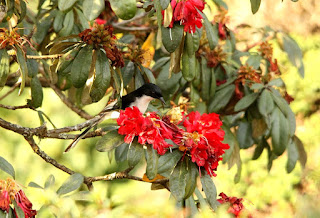 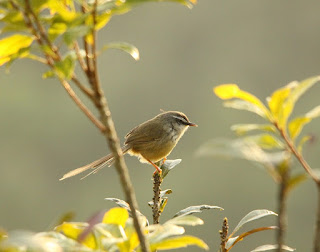 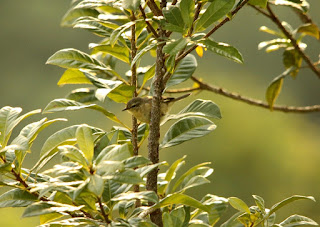 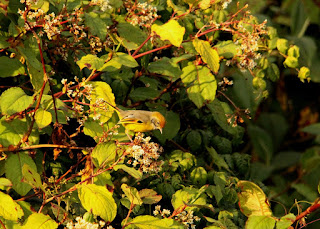 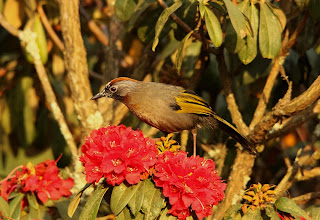 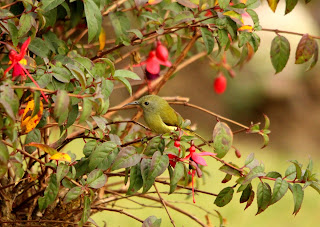