Stuart Cavaliero, the owner of Chiang Dao Nest had very kindly offered to drive me up to DYK today in his 4-wheel drive. DYK is the highest point you can drive up to on Doi Chiang Dao but from Chiang Dao Nest involves driving abck to Chiang Dao town, south along the bypass and then about an hour and a half along a lane that quickly disintigrates into a bumpy dirt track. A 4-wheel drive is essential to reach the substation at the top and a permit needs to be obtained in advance allowing access past 2 checkpoints on the road. I am very grateful to Stuart for arranging this for me and only charging me for a share of the petrol and my permit.
Into the bargain Stuart is an avid fellow Norwich City fan so we had plenty to talk about besides the birds!
Belinda had intended joining us but the thought of a 05.30 start put her off and she opted out the night before over dinner!
Setting out in the dark we didn't see any birds for a while and we were well up the track before our first birds of the day. And what birds they were - 3 White-crowned Forktails hopping about on the track which had me desperately trying to photograph them in the car headlights! 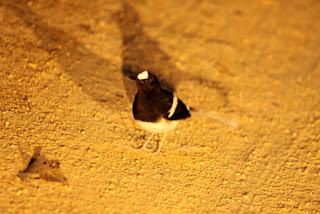 White-crowned Forktail
Crawling up the track we were hoping to get an early morning sighting of one of the specialities of the site - Mrs Hume's Pheasant but alas it wasn't to be this time. Instead, all we could muster was a White-rumped Shama. Parking the car on the open grassy area by the substation we walked a short distance to check a large pond. The pond held nothing but with the early morning sun catching the trees on the far side we soon started seeing some quality birds - Lesser Coucal followed by Maroon Oriole, Eurasian Jay, Lesser Racket-tailed Drongo and Black Bulbul all sat in the same tree top! A much wanted Giant Nuthatch (the other speciality here) flew into a pine and showed all too briefly while a bare tree on the grassy area held 2 Spot-winged Grosbeak and Flavescent Bulbul, the latter being quite common up there. A couple of Mountain Imperial Pigeons and a Large-billed Crow flew over. 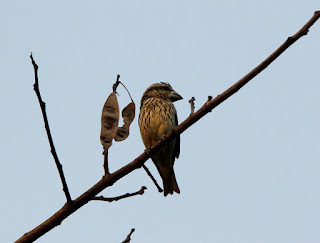 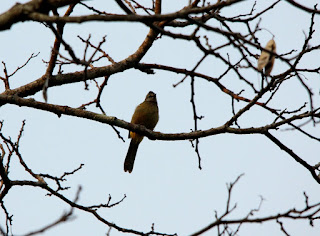 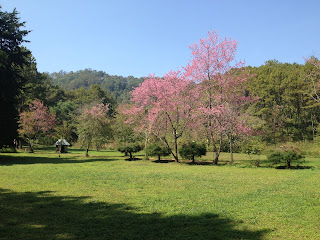 DYK, the grassy area at the top
﻿
We then opted for a walk back down the track which we'd just driven up. 5+ Olive-backed Pipits were immediately obvious on the track and we soon had the first of about 6 Velvet-fronted Nuthatches and 3 showy Stripe-breasted Woodpeckers followed by a mini rush of bulbuls - 2 Ashy Bulbuls, 1 Mountain Bulbul, several Sooty-headed Bulbuls and more Flavescent Bulbuls. 2 Hoopoes further along the track were the only ones of the whole trip. 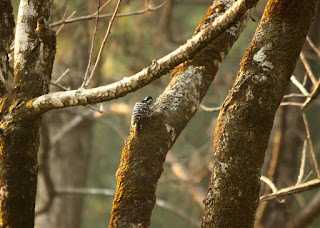 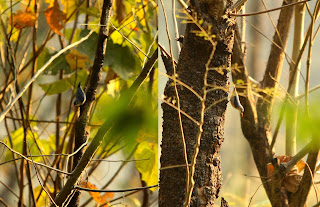 A little farther down we enjoyed close views of a pair of White-browed Shrike Babblers, Lesser Racket-tailed Drongo and a dinky Little Pied Flycatcher before a pair of minivets caught our eye. At the time we thought they were Scarlet Minivets but examination of the photos revealed them to be Long-tailed Minivets. Just before we turned round to walk back up 3 Black-naped Orioles joined the list which by now also included Grey-headed Canary Flycatcher, Ashy Drongo, Pacific Swift, Taiga Flycatcher, Blyth's Leaf Warbler and Little Spiderhunter.
The return walk was quicker but still had a surprise or two up it's sleeve in the form of a male Hill Blue Flycatcher, 3 Grey Bushchats and a pink male Rosy Minivet.
Back at the car Stuart realised he'd left behind some of the food that had packed so we snacked on salad, fruit and cereal bars while we decided our next course of action.
Plumping on a walk around the area behind the substation which contained lots of pines (in the hope of another Giant Nuthatch) we managed to find a lovely Lesser Yellownape, Blue-bearded Bee-eater, Grey Bushchat and a bird that I commented on at the time that looked like an overgrown green House Sparrow with a small black bib - bingo, it proved to be a Crested Finchbill!
Back by the car several Japanese White-eyes were enjoying the flowering trees and on the drive back down a female Chestnut-bellied Rock Thrush completed a rather splendid day out! 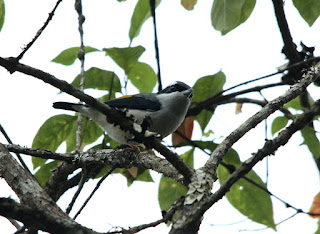 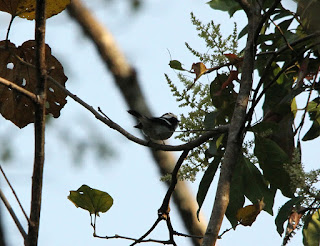 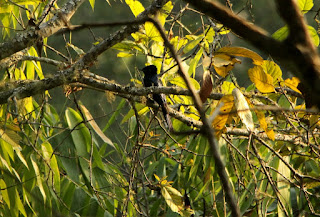 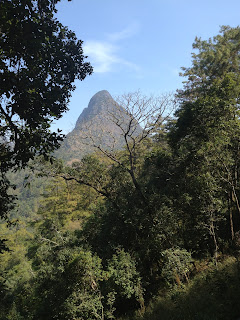 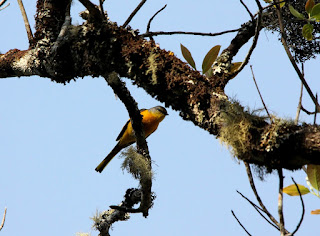 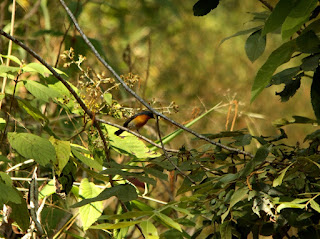 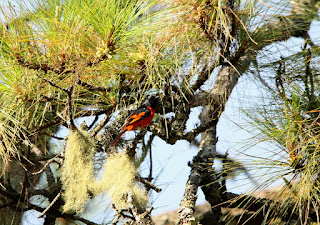 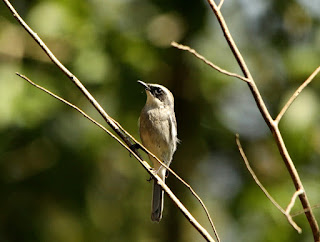 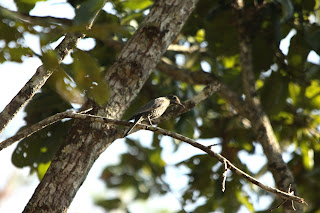 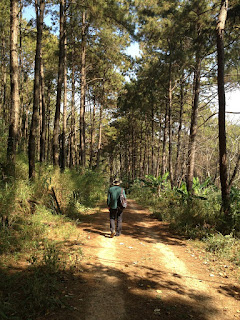