Khao Sok NP was eagerly anticipated and this morning we walked to the park entrance from Our Jungle Home.
A Blue-banded Kingfisher on the river while still within 100 meters of our room was an excellent start to proceedings and along the entrance track c10 Black-naped Orioles were the most obvious species but 2 Acrtic Warblers also showed nicely and 4 Large-billed Crows were followed up with a White-breasted Kingfisher perched up before we got to the checkpoint to pay our 200 baht entrance fees.
Once inside we opted for a walk along the 'wide trail' which runs roughly westward and parallel with the river on the north side.
Initially things were pretty quiet with just a male White-rumped Shama, Pale-legged Leaf Warbler and Little Spiderhunter. Overhead I then scored with my very first needletail ever in the form of a hurtling Brown-backed Needletail and scrutinisation of the swiftlets here had them nailed as Black-nest Swiftlets. A detour down a side path towards the river revealed 3 Ochraceous Bulbuls but views of the river or anything other than thick forest were few and far between. An open area held 2 Bar-winged Flycatcher-shrikes, the only Black-naped Monarch of the whole trip, Common Tailorbird and Black-headed Bulbul.
Depite seeing some good birds the growing sense of frustration and ever-steepening paths encouraged us to turn around the retrace our steps. On the way back I found a nice male Slaty-backed Flycatcher as we headed back to the carpark/HQ area and some much needed late breakfast.

Opting against a very steep and hot walk up the 'narrow trail' we hung around the carpark area and found the birds here rather more showy and photographable. Orange-bellied and Scarlet-backed Flowerpecker showed beautifully and then a male sunbird popped up in a bush and was id'd as a Ruby-cheeked Sunbird and another lifer! Black-headed Bulbuls and Olive-backed Sunbirds were obvious here too and a Grey Wagtail was on the river by the bridge. 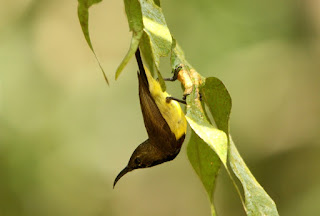 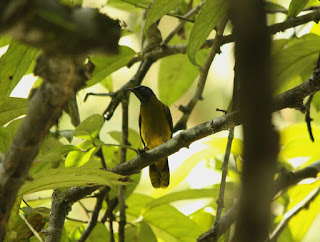 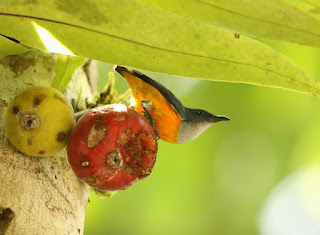 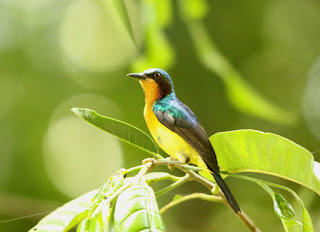 Around the cafes in the lane a couple more Olive-backed Sunbirds performed and then along the track heading back a family party of Striped Tit Babblers entertained. Back at Our Jungle House we found our room had been raided by macaques for the 2nd day running but at least a pair of Red-eyed Bulbuls there were some recompense! 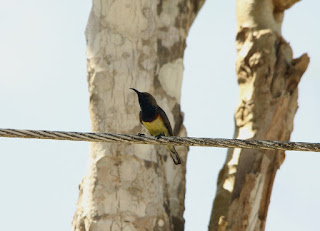 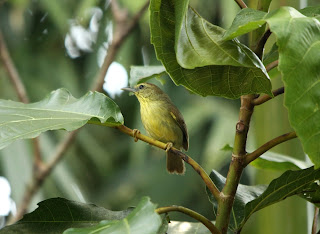