Our primary target this morning was to find the one highland endemic we were missing - Sri Lanka Woodpigeon. Although it is possible to see them at Sinharaja they are rare there so realistically this was last chance saloon.
Things didn't start off very encouragingly at Seeth Eliya Forest Reserve just outsde Nuwara Eliya. We walked a track past a smelly rubbish dump and through likely looking woodland here and saw not very much at all. A Crested Goshawk was pick of the bunch with 3 Orange Minivets, a Grey-headed Canary Flycatcher, 2 Dark-fronted Babblers, Velvet-fronted Nuthatch and Sri Lanka White-eye but no woodpigeon. At least I managed to get my only shot of Purple-faced Leaf Monkey here. 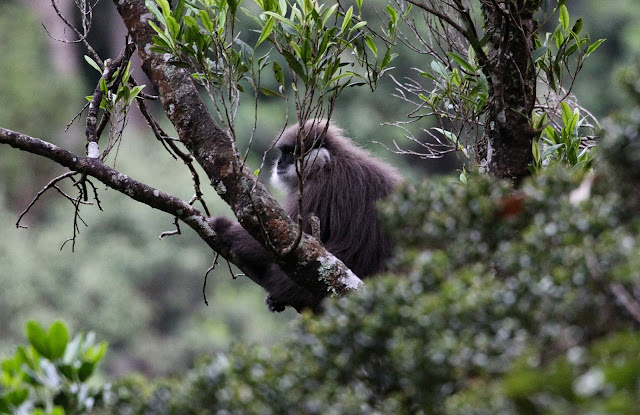 Undeterred we moved onto a little reserve which I discovered was called the Surrey Bird Sanctuary and things started to improve. An Oriental Honey Buzzard over the carpark was followed quickly by 2 Lesser Hill Mynas high in trees. Just as I was about to photograph them Hetti called excitedly and we dived into the forest after him. What he'd heard was Sri Lanka Scimitar Babbler and I went on to get a brief poor view of one later on. Finally though, we got onto a flying Sri Lanka Woodpigeon and then over the next few minutes better and better views were finally obtained - phew! We ended up seeing c3. Even better was to follow when we were pointed at a roosting Brown Wood Owl staring dolefully down at us! Yellow-fronted Barbet, Brown-headed Barbet and Tickell's Blue Flycatcher were added and we left the site to travel south in fine fettle. 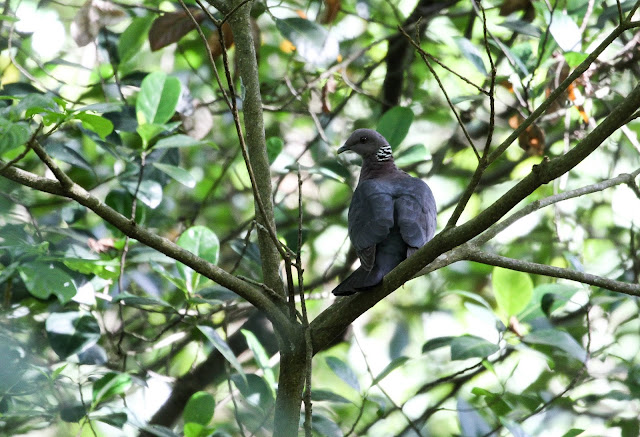 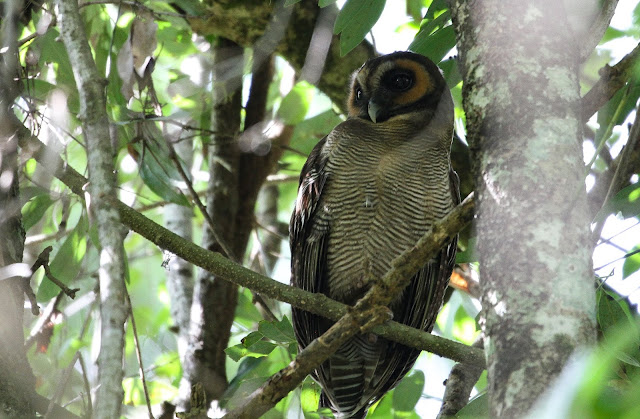 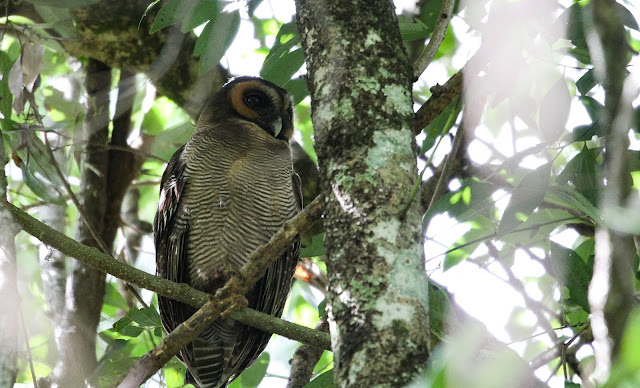 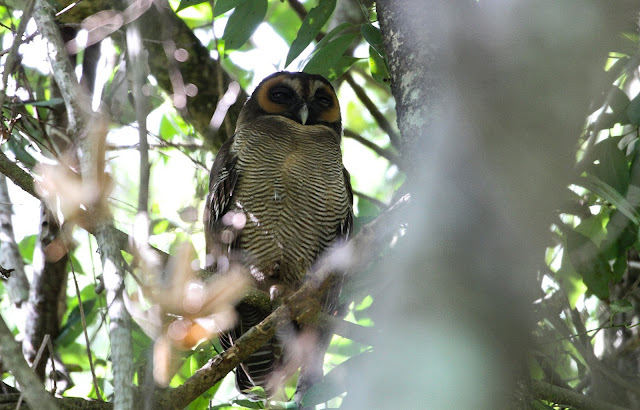 Our winding trip south took us through some lovely hill scenery and things slowly began to flatten out as we neared the coast. A stop and short walk at a roadside wetland just before we reached Tissmaharama gave us our first real waterbirds and a boost to the trip list with 2 Spot-billed Pelicans, several Purple Herons, White-breasted Waterhens, Pheasant-tailed Jacanas, a distant Jacobin Cuckoo our only Pied Kingfisher of the whole trip and our first Intermediate Egrets. Both Gull-billed Terns and Whiskered Terns were busy fishing.

We checked into the Grand Yala Hotel next and over lunch were entertined by a pair of Purple-rumped Sunbirds before we headed off to the main 'Tissa' wetlands for the afternoon. On the way 4 Great Thicknees in paddies by the road was a nice surprise and as we neared the wetland area we picked up 2 young guys who were Hetti's local scouts. First they took us to a roosting Brown Fish Owl in riverside trees where we also had Asian Koel and Stork-billed Kingfisher. Next, just a few streets away were walked down a path between houses to a clearing where we scored with a Jungle Owlet that eventually sat still for photos and a gorgeous White-naped Woodpecker. These guys know their area for sure! At the main large wetland/lagoon we regretted not having a scope but still notched up 6 Painted Storks, Asian Openbill, White-bellied Sea Eagle, 2 Indian Peafowl, Pheasant-tailed Jacanas, 2 Wood Sandpipers, 4 Marsh Sandpipers and 2 Caspian Terns. A little further along a small bushy island produced both Yellow Bittern and Cinnamon Bittern plus feeding Purple Gallinules. As the light began to fade we watched a roadside Clamorous Reed Warbler singing and a massive heron and Indian Flying Fox roost.

As dusk approcahed we drove a little further to an area for nightjars. Alas none showed but c70 Black-crowned Night Herons emerged from roost and I flushed a Pintail Snipe from the trackside. 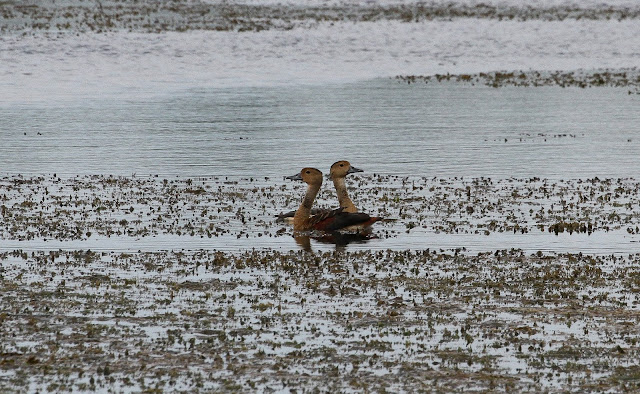 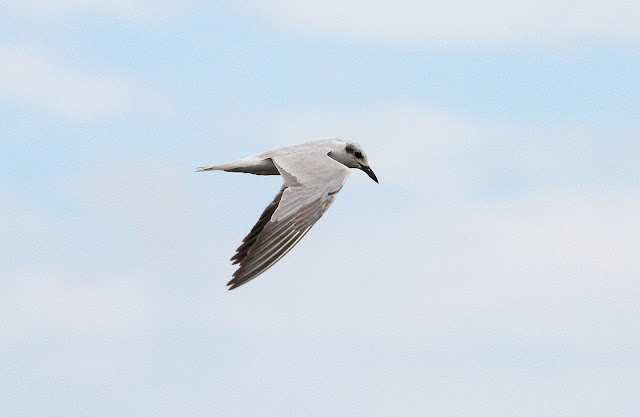 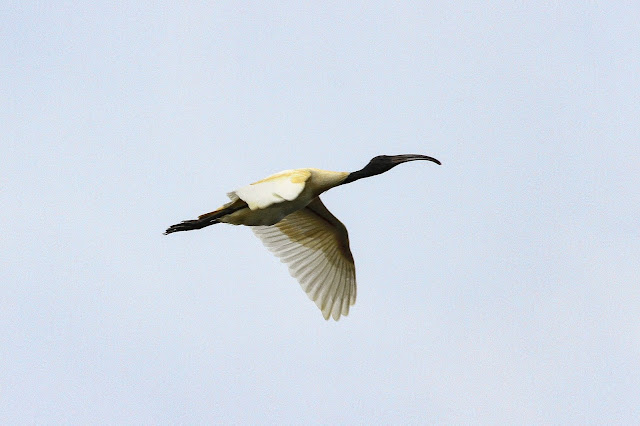 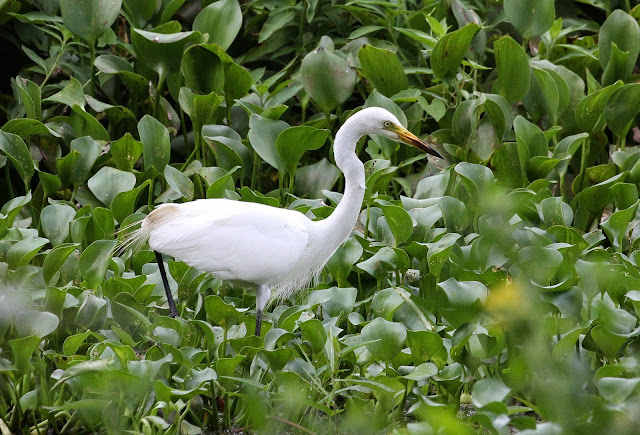 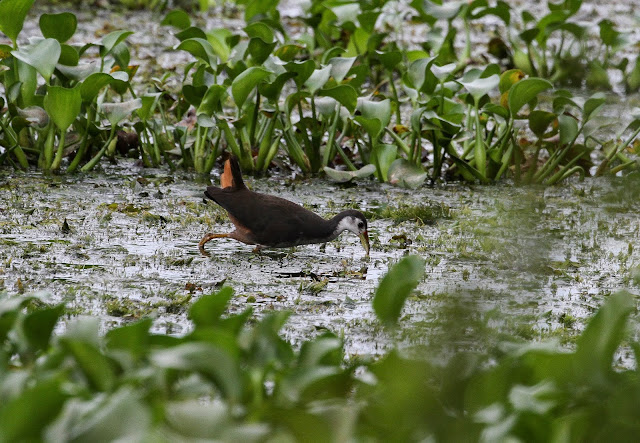 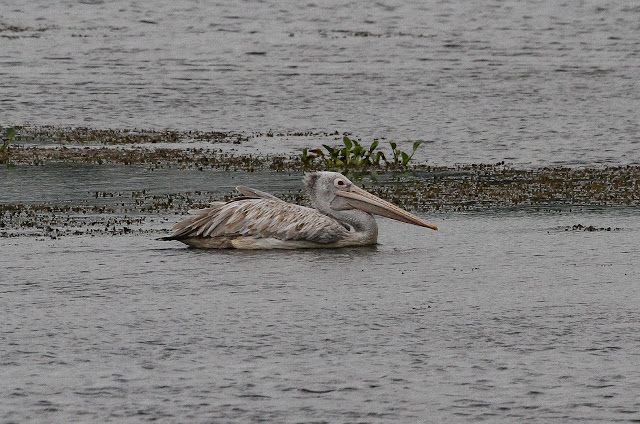 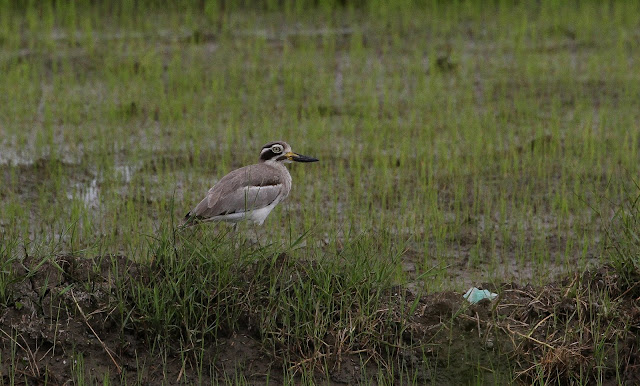 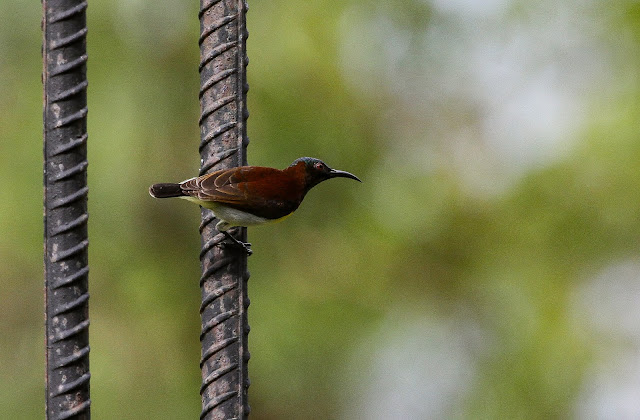 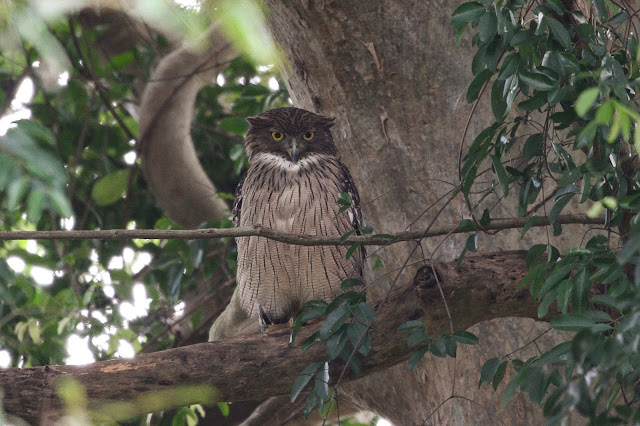 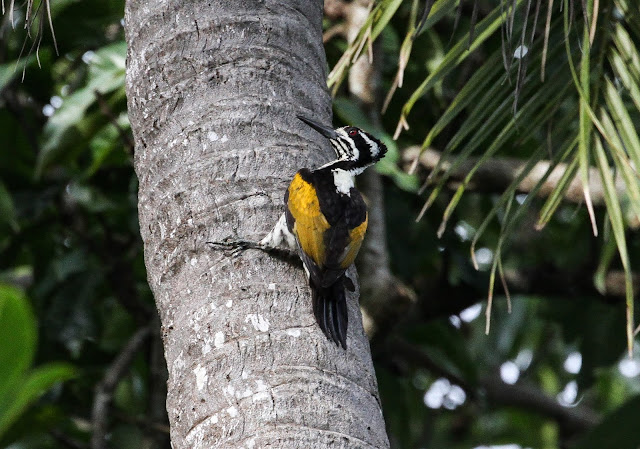 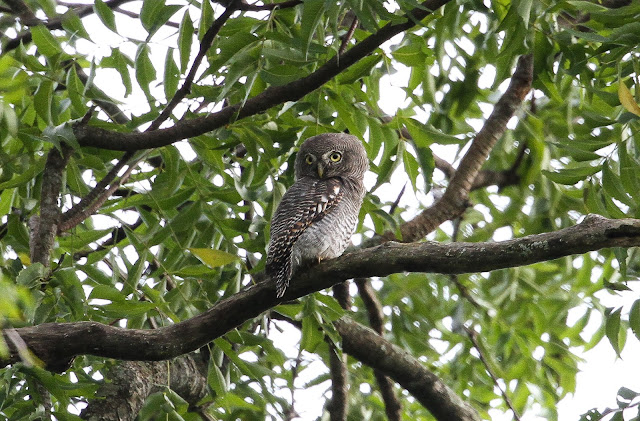 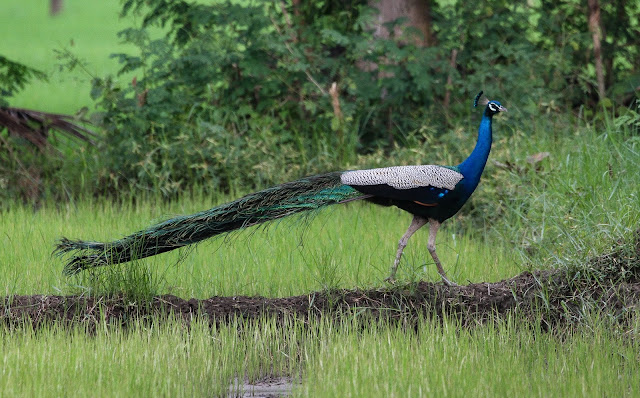 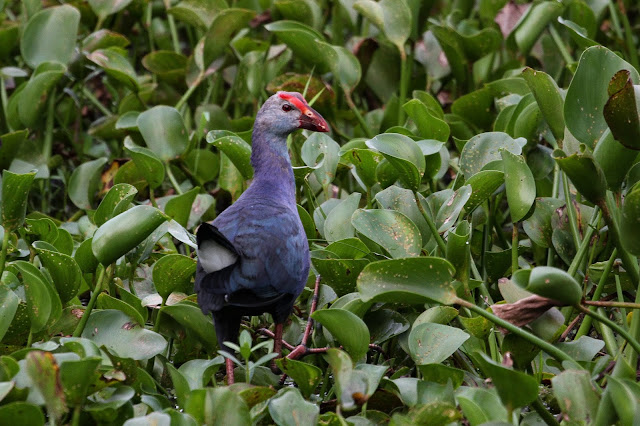 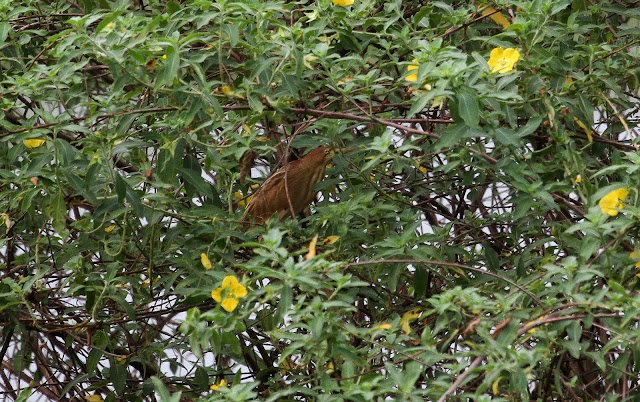 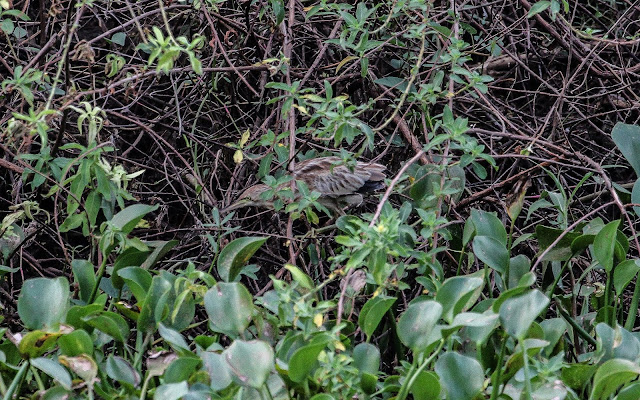 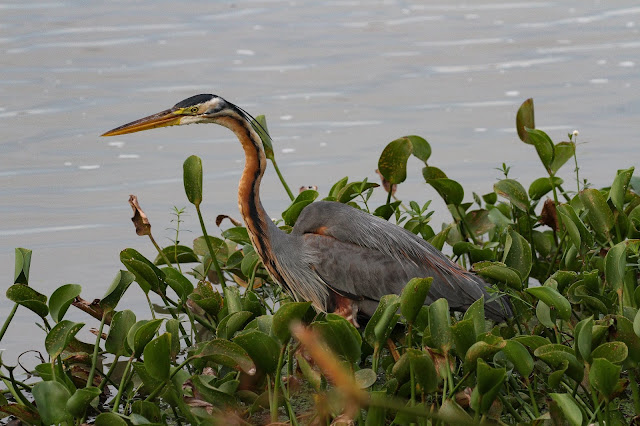 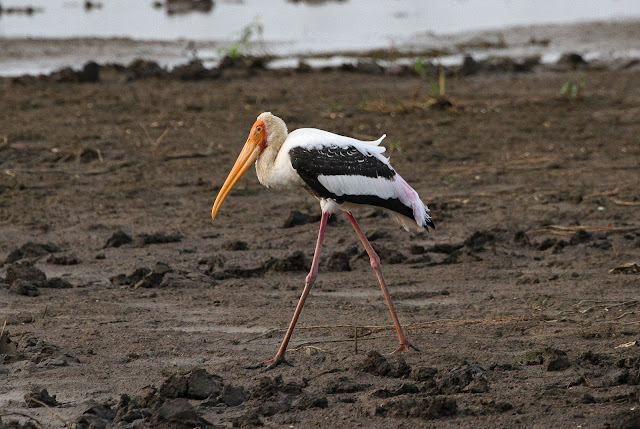 Painted Stork
Posted by Chris at 16:17