Another highly successful day out with Jeremy and Matt. This time in Essex and a slow mender back via some Suffolk sites. Due to sensitivities some of the sites have to remain unnamed - sorry. This blog entry is a little over-indulgent in photos too!

First up was my 2nd visit of the week to the Greater Tongue Orchids to show the boys. Also there we had an obliging Brown Argus, several Small Heaths, Four-spotted Chaser and a distant calling Cuckoo. 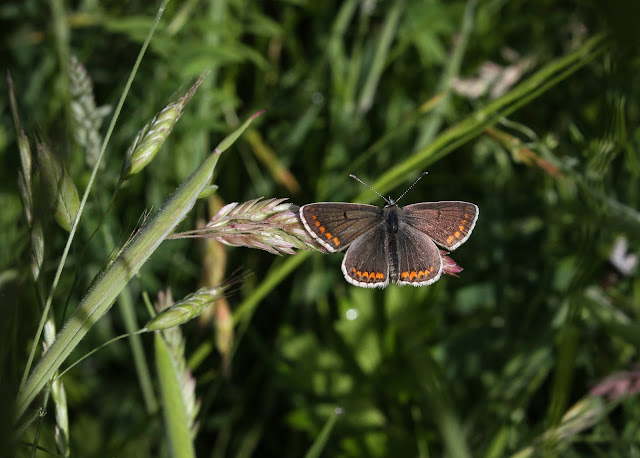 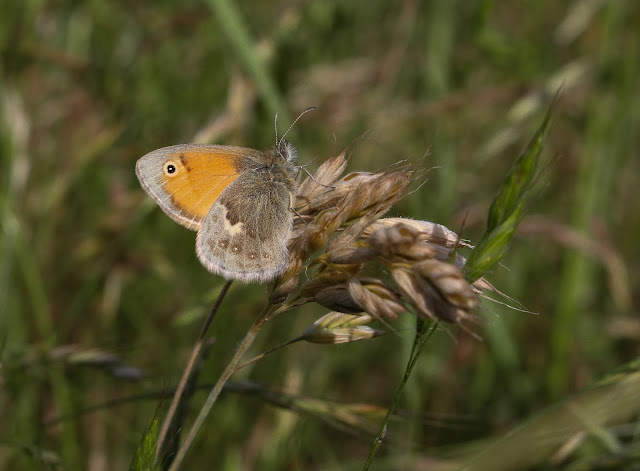 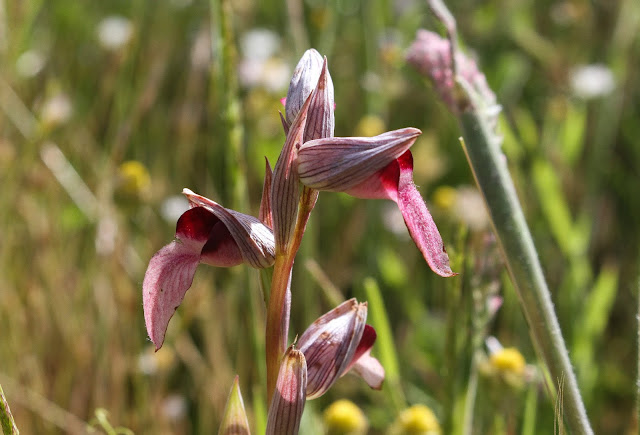 Our next port of call, and our furthest from home was Hockley Woods near Rayleigh. Having dome my homework in advance I'd pinpointed where in the wood to find our target and spot on cue, right where they should have been were a good number of very obliging Heath Fritillaries. We spent some time with these delightful insects managing to get some lovely photos, including a mating pair that were in no hurry to move! The spot was covered in Common Cow-wheat, the laval food plant of the butterflies. 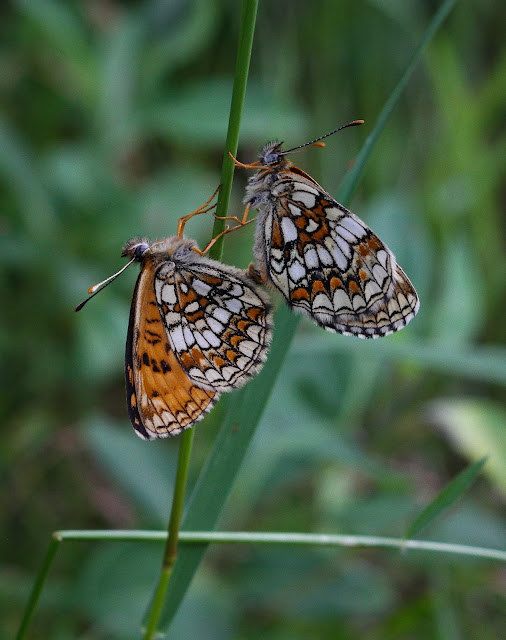 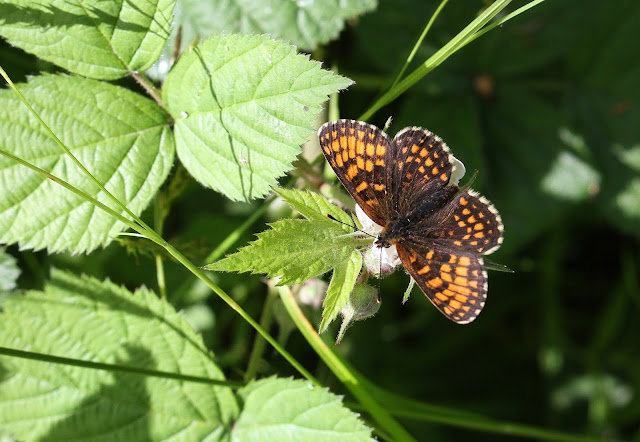 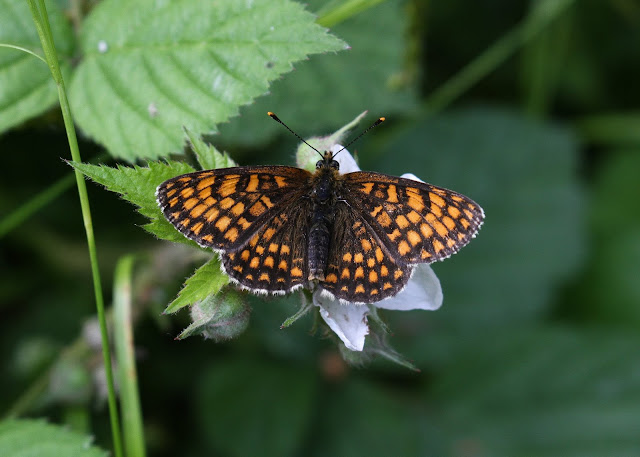 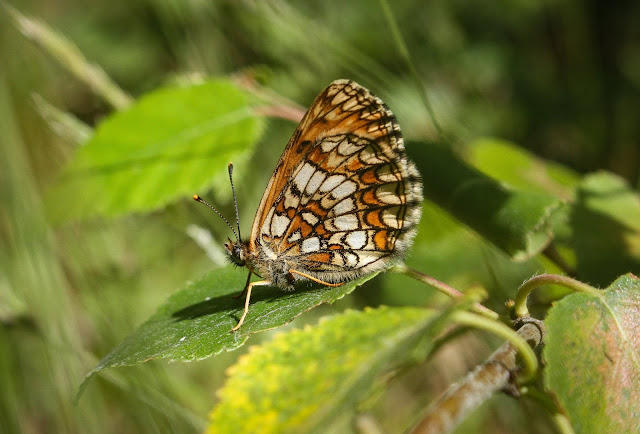 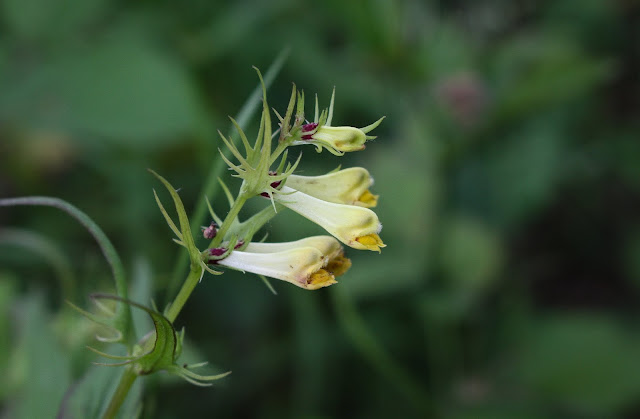 News broke of a possible Balearic Woodchat at Kessingland but with photos quickly coming out proving it not to be one we carried on with our plan for the day.

Long Melford Green was a new orchid site for me and it didn't take long to find the small area designated as a nature reserve. And it was full of a bewildering array of orchids/hybrids - we identified Southern Marsh Orchids (including a couple of 'schoenophila' candidates), Early Marsh Orchids (incarnata), Common Spotted Orchids, Bee Orchid and Southern Marsh x Early Marsh hybrids. 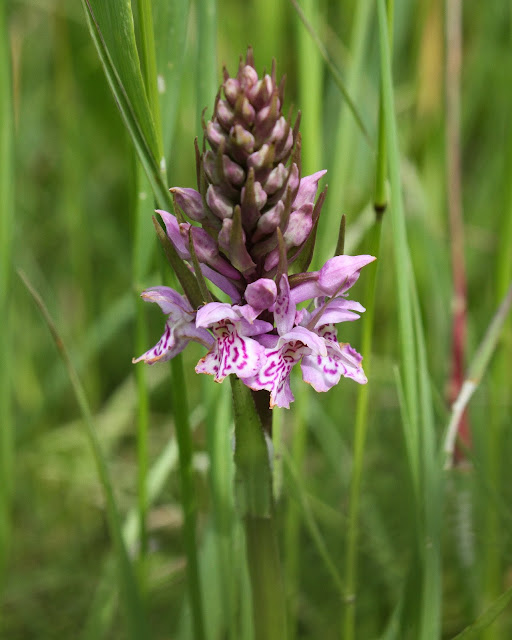 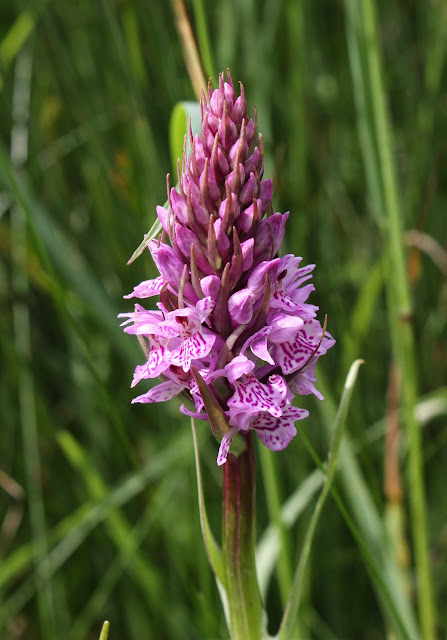 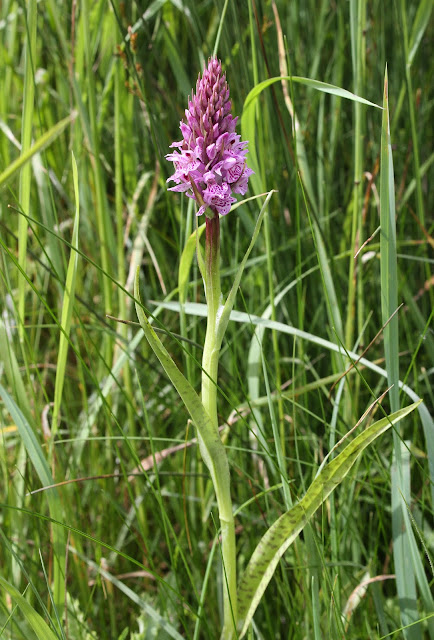 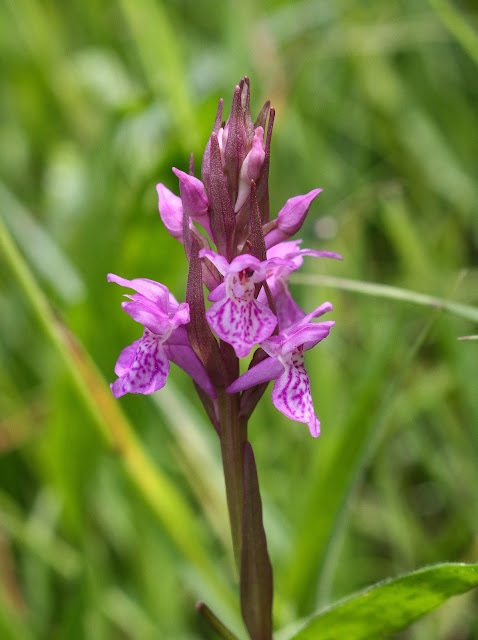 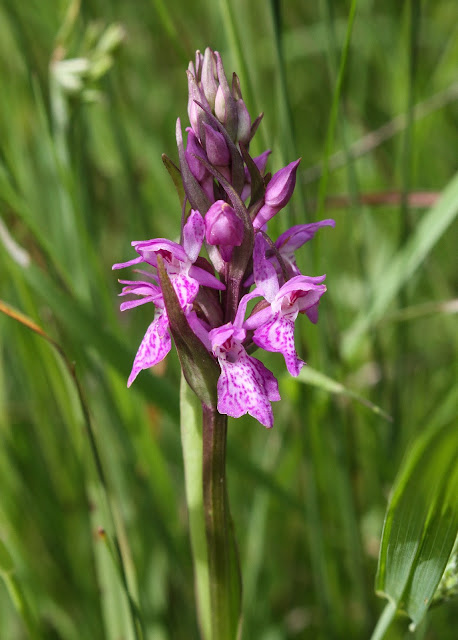 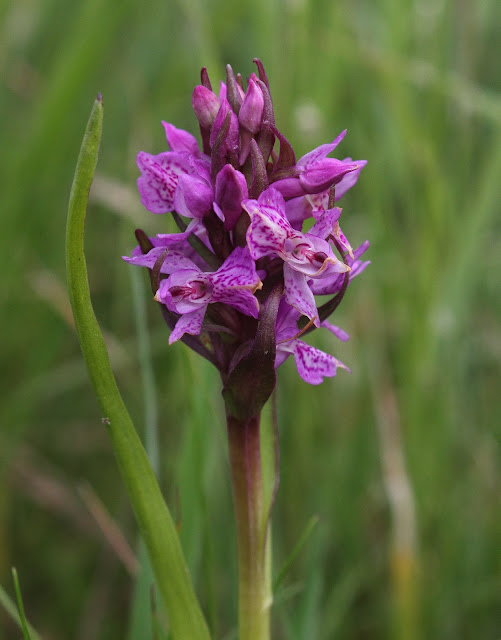 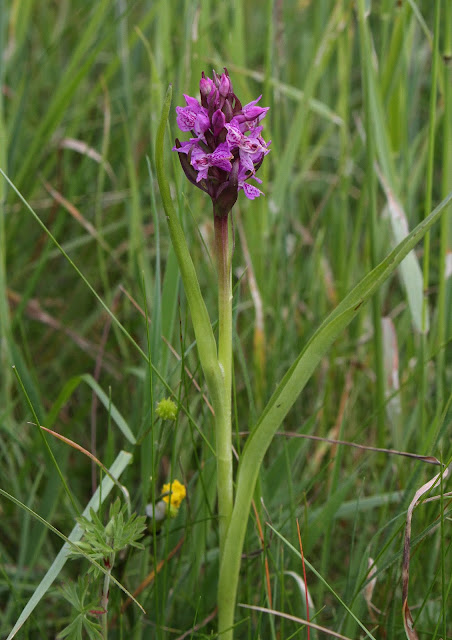 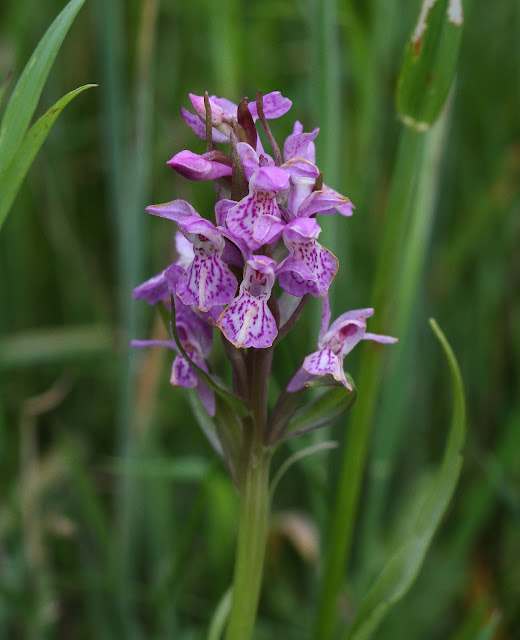 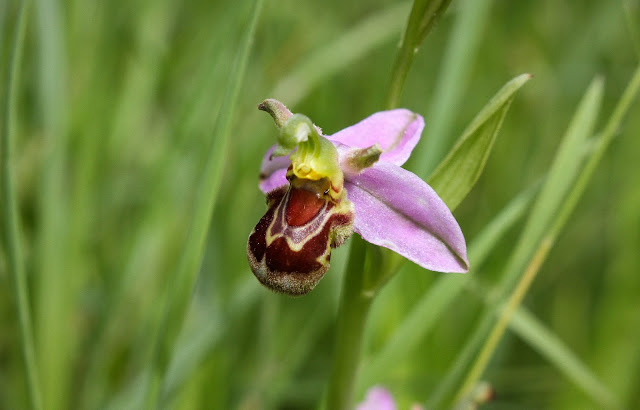 We then moved on for an extended exploration of another site where 31 Fly Orchids were located albeit mostly now going over. A huge bit of excitement for me was witnessing several acts of psuedo-copulation of Fly Orchid flowers by a digger wasp sp. Something I'd never seen before - mind blown! Also in the area were c35 Bee Orchids, including a curious specimen with upside down flowers and another lacking lip markings. Loads of Common Spotted Orchids of various shades, 7 Greater Butterfly Orchids, a few Pyramidal Orchids just about to come out, Small Copper, Speckled Woods, Green-veined White, Burnet Companion moths and c4 Meadow Browns, one of which was half male, half female with the upperwings being male on the lhs and female on the rhs! Sadly every time it landed it closed its wings! 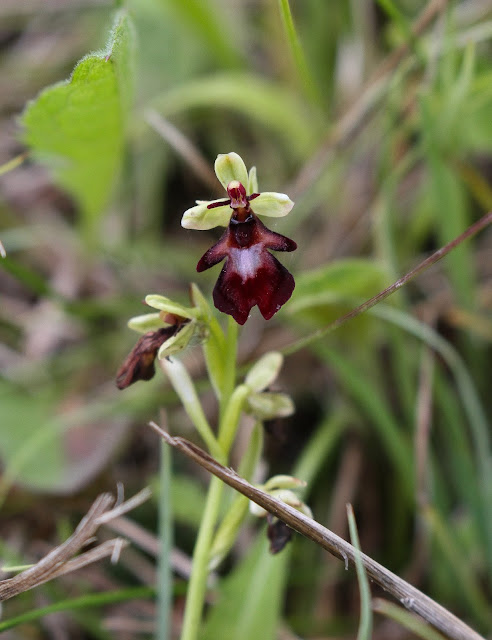 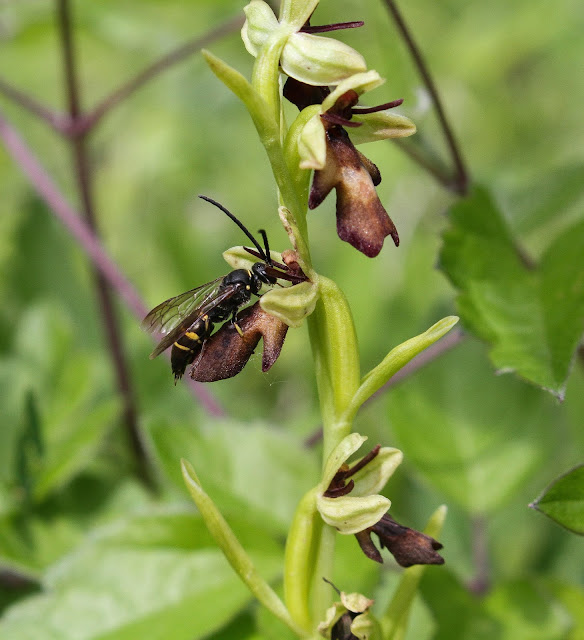 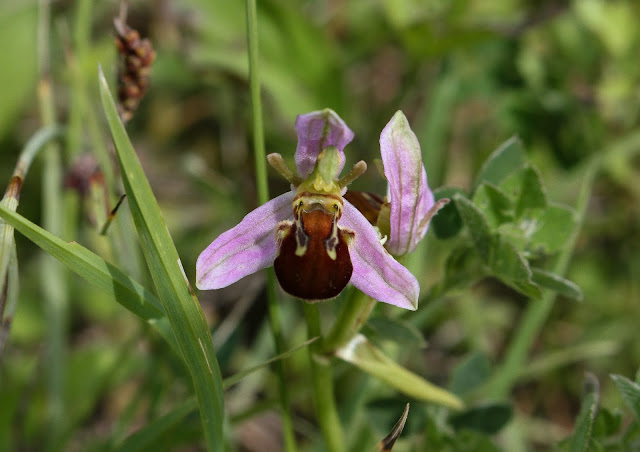 Bee Orchid with no lip markings 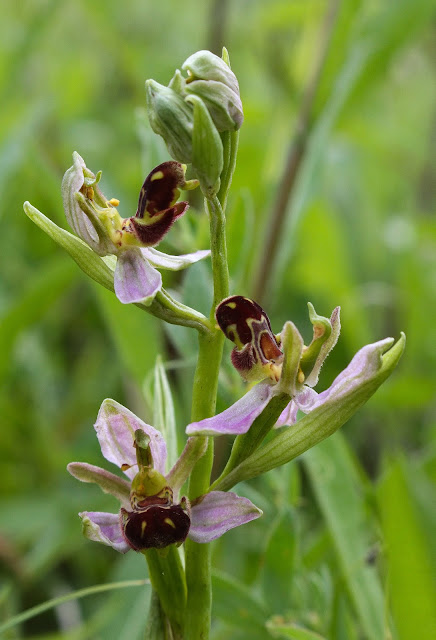 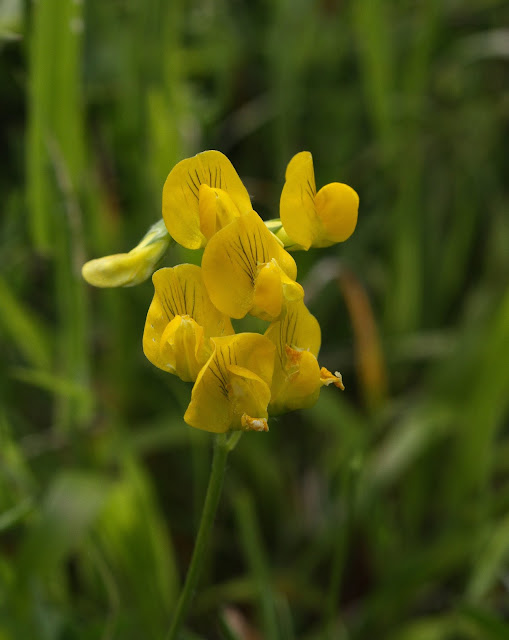 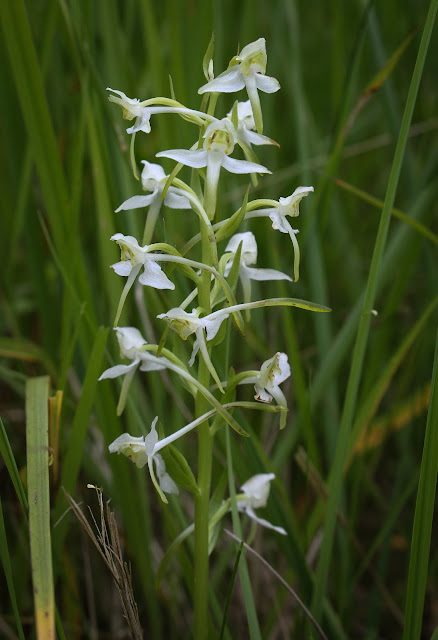 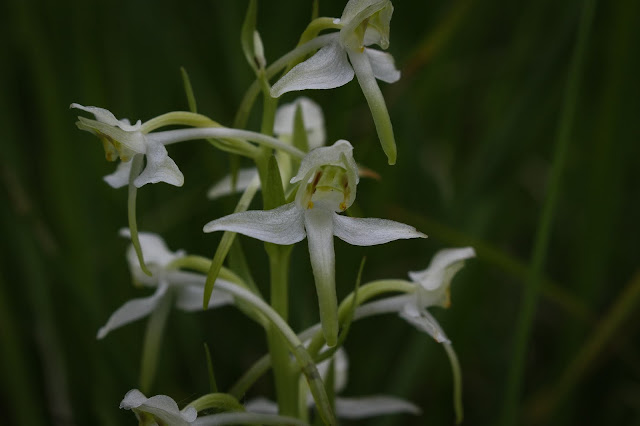 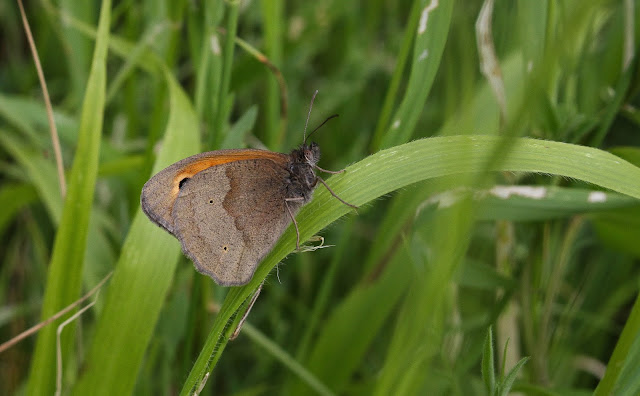 We finished our wandering with a visit to a roadside nature reserve to see Man Orchid but were dismayed to find one verge had been strimmed and the other held one brown, gone over specimen and c6 others that had died while only a couple of inches tall and never flowered. The matter has been reported to Suffolk CC who's highways dept are investigating. Luckily, with a little detective work we discovered another roadside nature reserve nearby and some scrutiny of that had me finding 2 Man Orchids together. One a lovely big specimen, the other a small wimpy one. Th verge was also full of Bush Vetch. 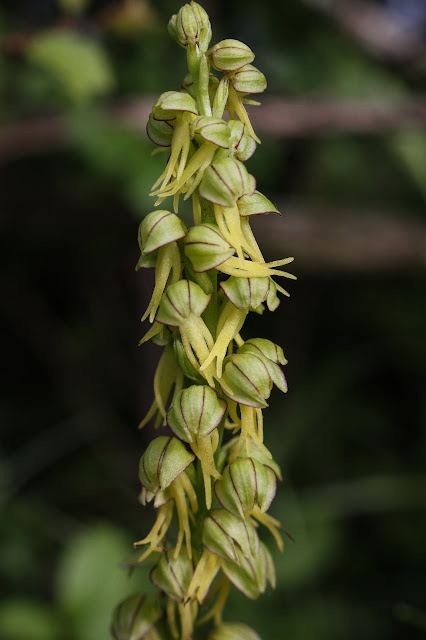 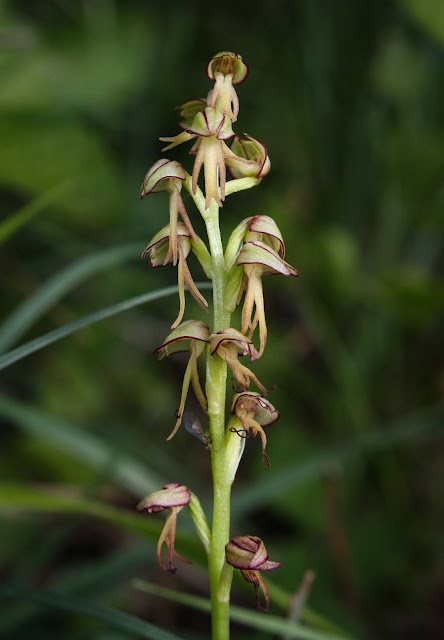 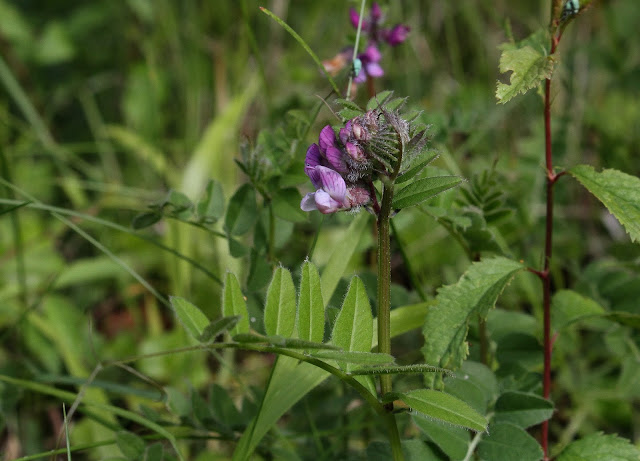