It was a short drive north out of Dalat to Langbian Mountain this morning. At this place you have to park at the large reception carpark and then you are ferried up the mountain road in a jeep. 2 Common Mynas on the roof of the reception building were my only ones of the trip. We were all dropped off at the start of the trail which leads right to the mountain top. Thankfully not the popular tourist spot so things were nice and quiet.

Initially it was hard to drag ourselves away from the roadside at the start of the trail because the birds kept coming! A Hume's Treecreeper was pick of the bunch but a pair of Chestnut-vented Nuthatches, 2 Mugimaki Flycatchers, Clicking Shrike-babbler, Green-backed Tit and then a tickin the form of a Wedge-tailed Green Pigeon perched low down at the bottom of a slope.

We eventually began walking clocking up Golden-throated Barbet, more Green-backed Tits, Grey Bushchat and a lovely pair of Vietnamese Cutias in pines. Both Mountain Fulvetta and Black-crowned Fulvetta (the latter with it's distinctive feeding behavoir of sticking to mossy-covered branches) followed until we stumbled upon a small feeding flock that contained Olive-backed Pipit, Plain Minla, White-tailed Leaf Warbler and Black-headed Sibia. Then we left the pines and entered denser evergreen forest. The highlights here were a very showy Snowy-browed Flycatcher, a group of c5 Collared Laughingthrushes which moved past us but remained elusive with mainly just low flight views, 2 Grey-headed Tesia (which I got a very nice views of early doors but others spent some time looking for), White-spectacled Warbler, Grey-headed Canary-flycatcher and Yellow-vented Flowerpecker. 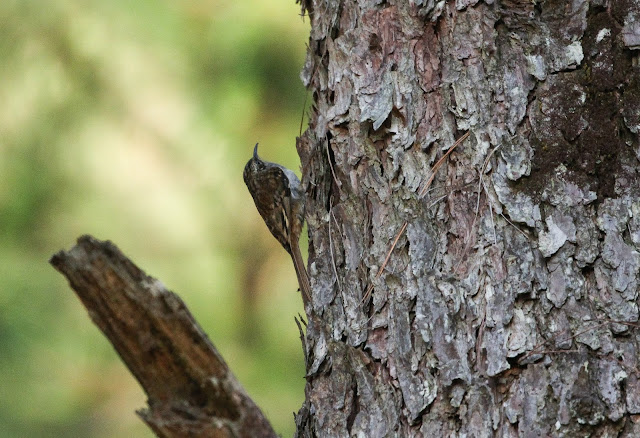 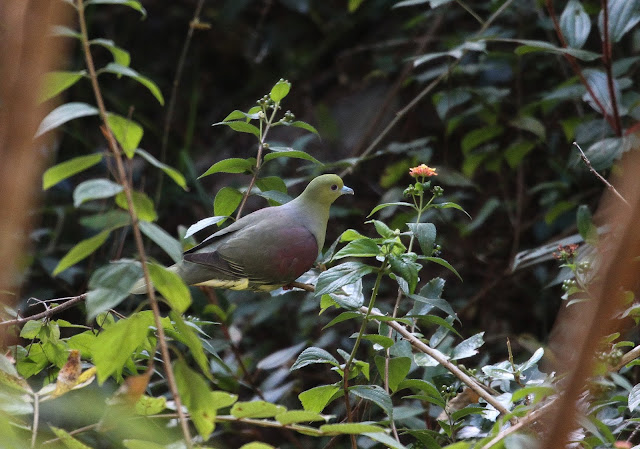 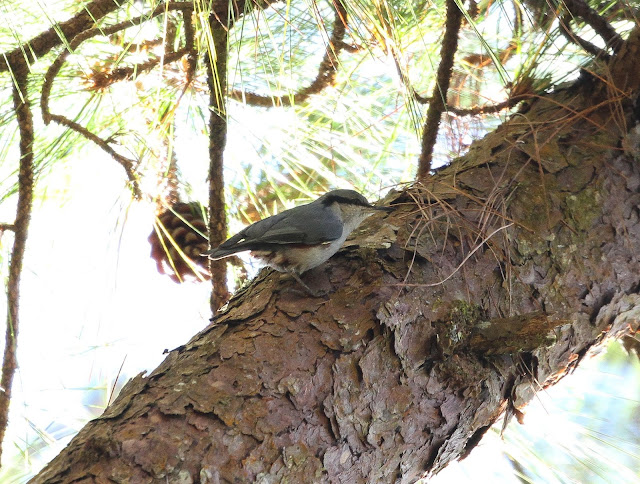 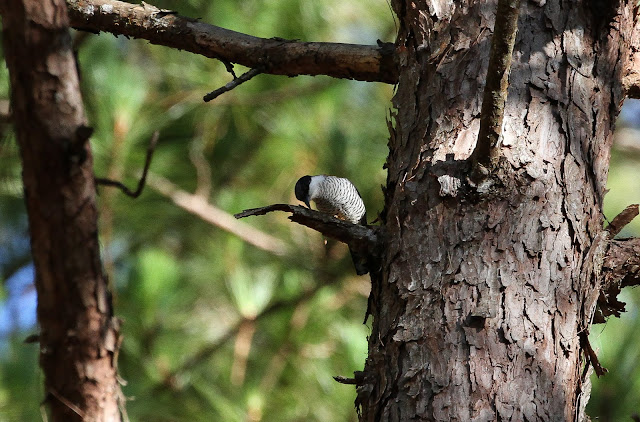 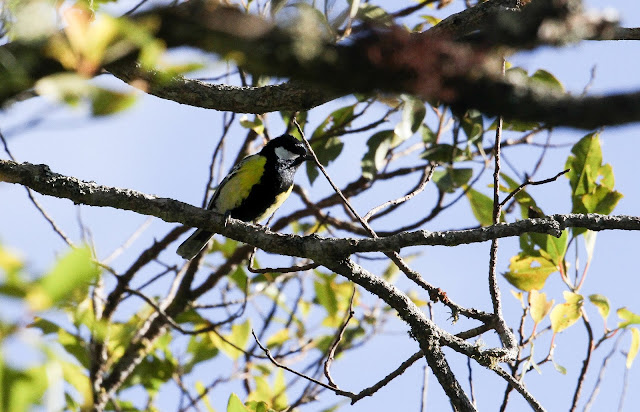 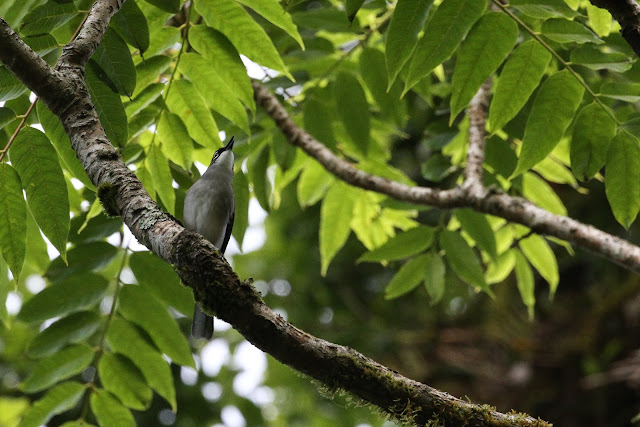 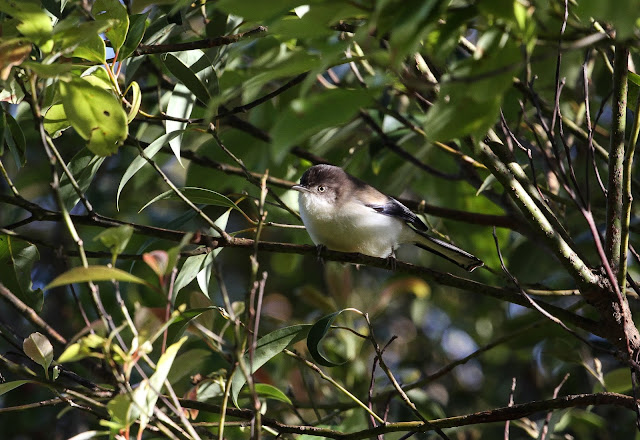 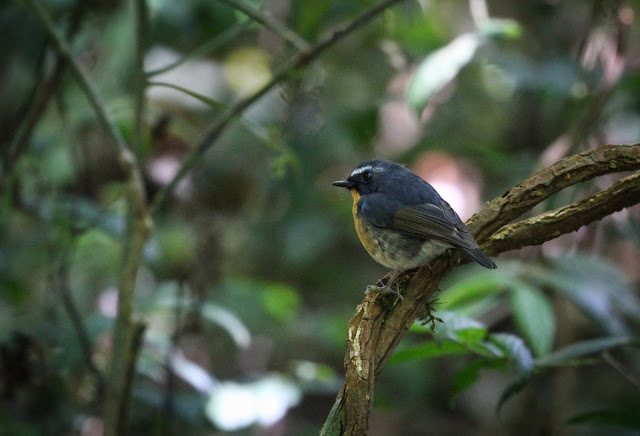 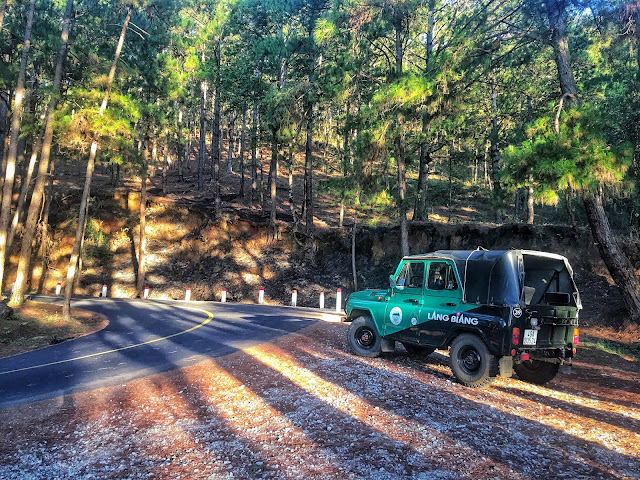 After our usual lunch stop back in Dalat (where by now we were choosing from the menu and I could have some western food for some variety!) we headed to a new location Ta Nung Valley. This very picturesque location is a strange one for sure. It has numerous twee and rather tacky 'romantic' posing places for couples and guys to take pictures of their posing girlfriends! These include swings covered in fake flowers, posing platforms overlooking the valley and numerous heart-shaped items - I kid you not! Turning up in the afternoon when the place was crowded with parading visitors didn't bode well but I have to say the place exceeded expectations. A group of bulbuls were showing nicely in bare dead trees and included Mountain Bulbul, Black Bulbul, Flavescent Bulbul and Black-crested Bulbul. Further along 2 Rufous-backed Sibias, 3 Scarlet Minivets, Black Cuckooshrike and a Black-throated (Langbian) Sunbird were added as we moved slowly along the winding main track. A flowering bottlebrush tree gave us some lovely close views of a pair of Annam Sunbirds and then c6 White-rumped Munias flew past and into the deep cover of a conifer. 2 Streaked Spiderhunters, 2 Grey Wagtails, Clicking Shrike-babbler, Mountain Imperial Pigeon, a Cambodian Striped Squirrel and Green-billed Malkoha followed. Then I found a very welcome Rufous-capped Babbler high in shrubs. At the bottom of the track 2 Hill Prinias were showing beside a pond and a group of c55 Indian Spot-billed Ducks plus a single Mallard were on the main lake. At the far end of the lake the inlet stream really came up trumps with a pair of lovely Slaty-backed Forktails. Things finished with a calling Annam Barbet on top of a tree. I was very much looking forward to a return visit in the morning, minus the crowds! 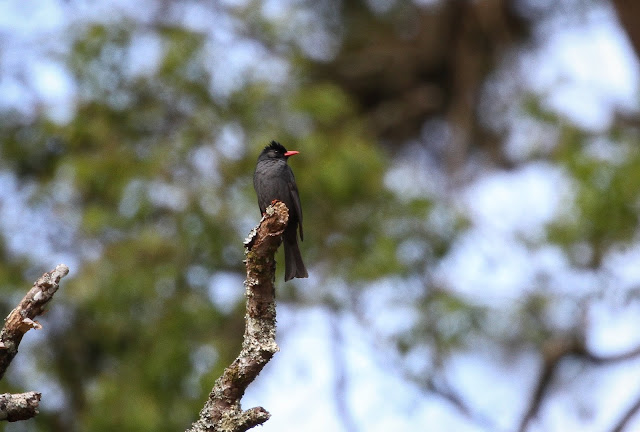 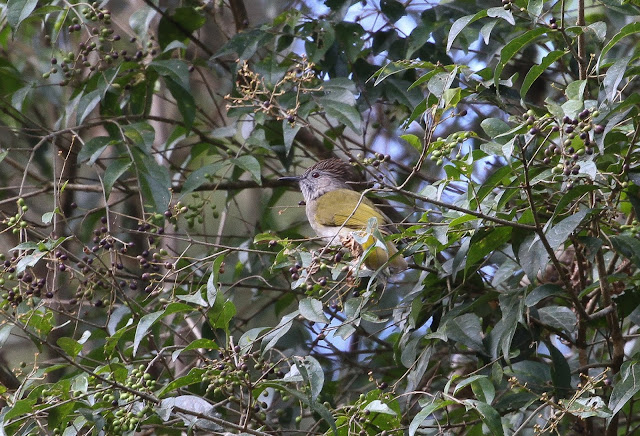 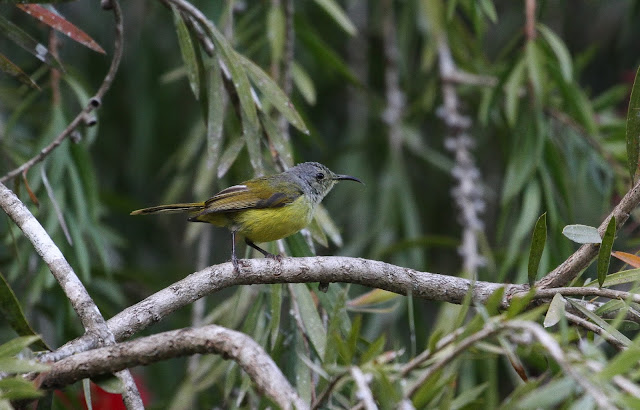 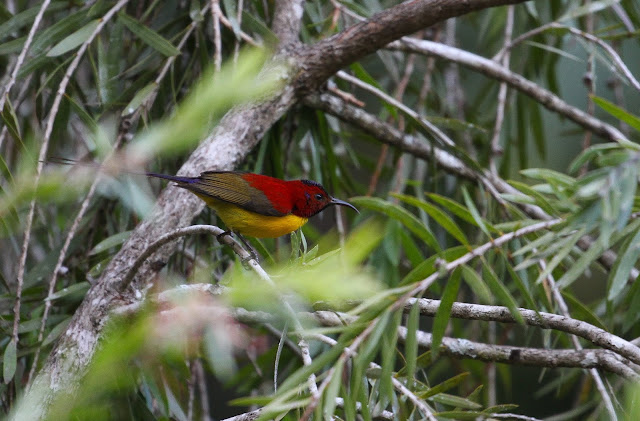 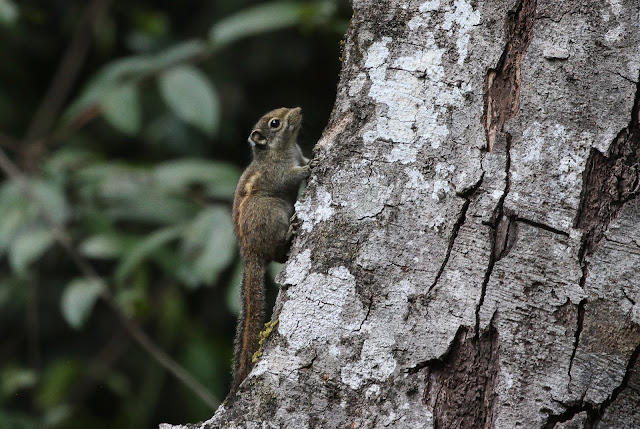 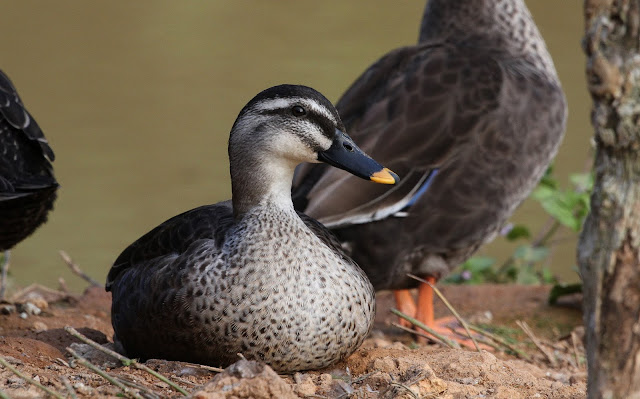 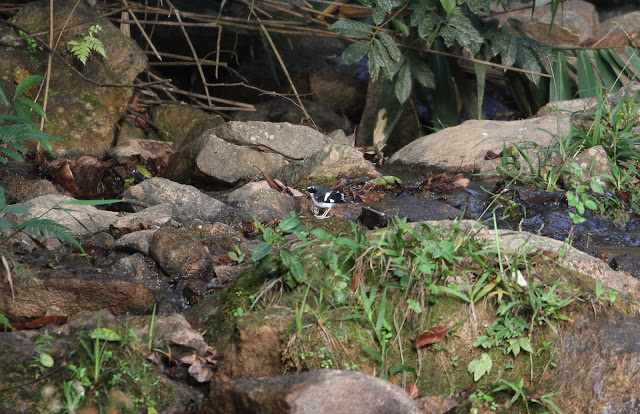 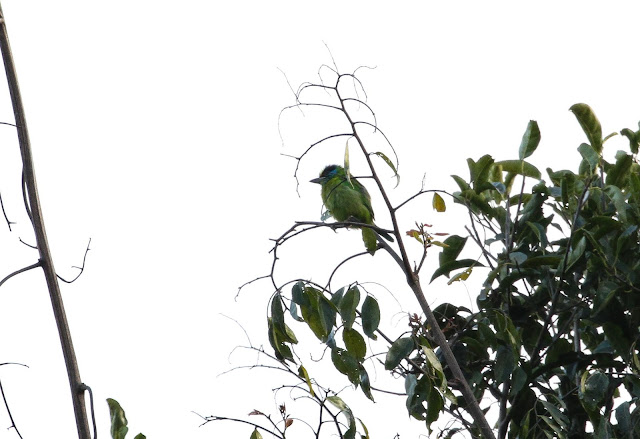 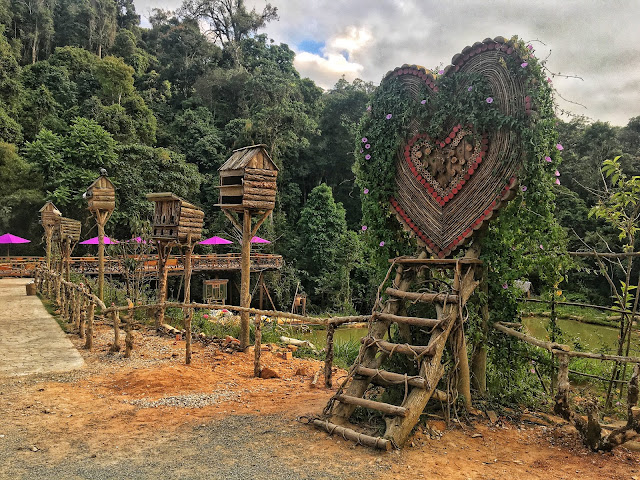 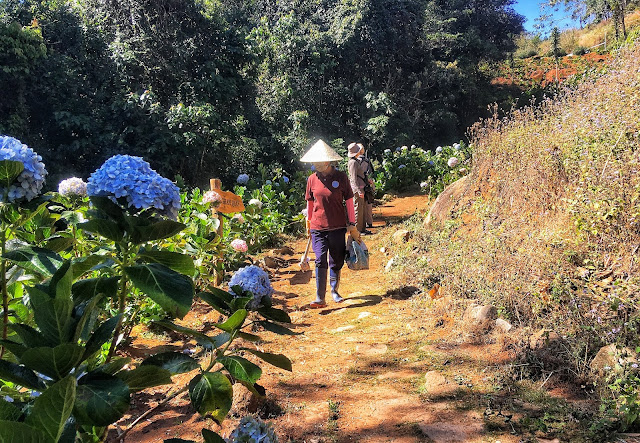 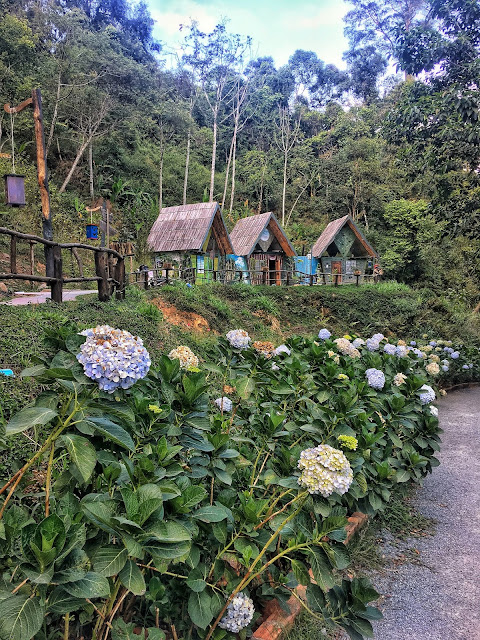