I quite the scene early from Lync-Haven and made my way down to the Daintree River to catch an early ferry south.

I was missing waders from the trip so decided on a look at Newell Beach again. Despite my early arrival there was still a fisherman there and with the tide well in it was largely a waste of time. Just 3 Black-fronted Dotterel and an Australian Ibis were present. I decided to look at the river mouth at the north end of Marine Parade in Newell and here I found 2 Beach Stone Curlews (just like buses they all come along at once!) a Whimbrel and 3 Striated Herons. It was time to leave and get to Mossman Gorge. 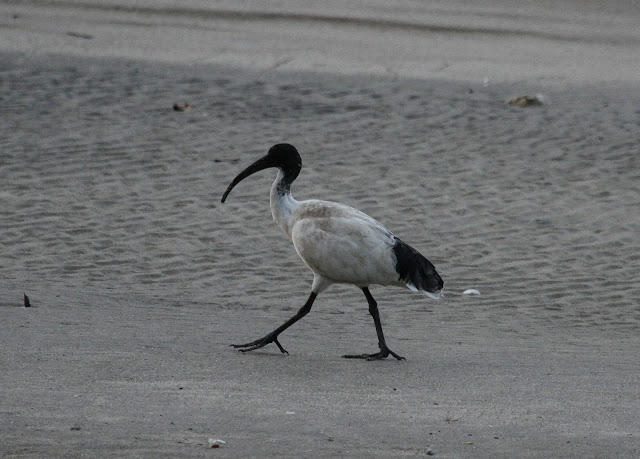 I'd not actually planned on going to Mossman Gorge but as it was supposed to be nice and I had a little spare time I decided to give it a go. I was so glad to be there early (08.00) because when I left 2 hours later the place was tourist-ville! Even with my early start I wasn't very impressed  - the gorge wasn't very spectacular and it cost $9.50 to be bussed up to the carpark from the reception. Birds were also fairly thin on the ground but in the end I managed and decent list - Grey Fantail, Pacific Baza, Spotted Catbird, Yellow-spotted Honeyeater, Australian Figbirds, Golden Whistler, Black Butcherbird, Spectacled Monarch, Silvereye and Mistletoebird but the best from a listing point of view was Metallic Starling by the reception centre. 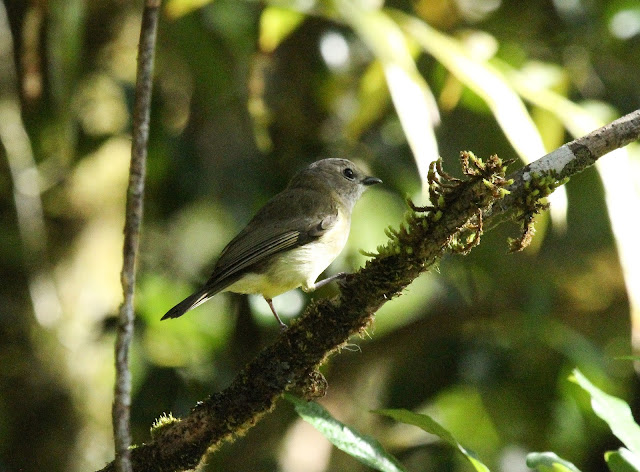 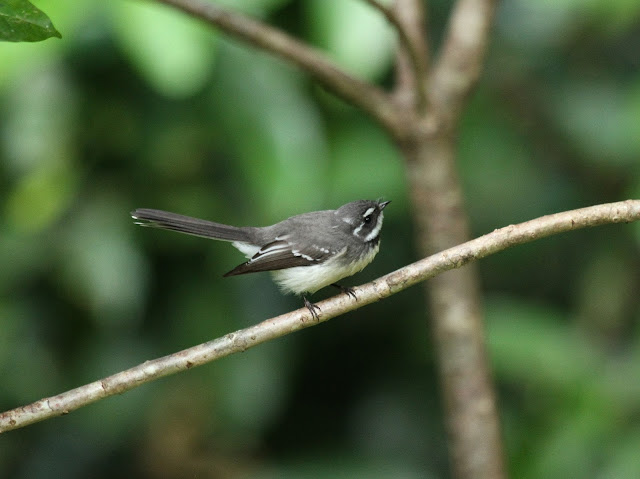 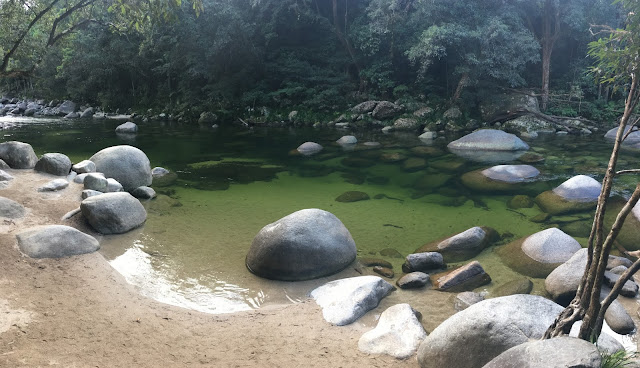 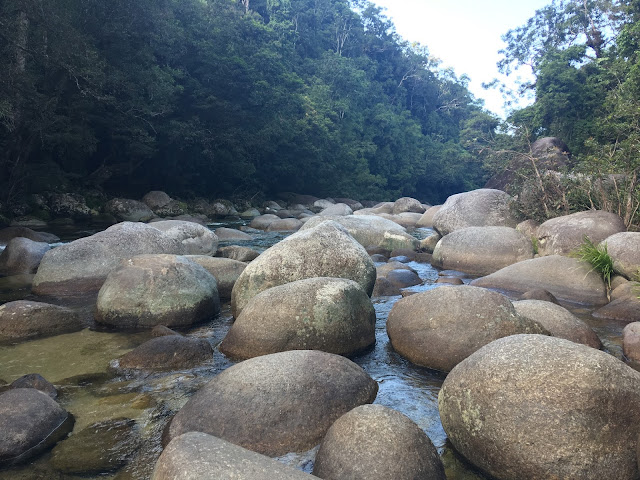 I left the crowds and headed down into Mossman for some chores (groceries from Woolworths Supermarket and a petrol fill up) before hitting the winding road up towards Julaten and Kingfisher Park which was to be my 'home' for the next 5 nights. En-route I stopped (illegally!) at a bit of a hot spot and had Yellow-breasted Boatbill, Yellow-faced Honeyeater, Long-billed Scrubwren and Rainbow Bee-eaters.

When I got to Julaten I decided that the attractively named Abattoir Swamp would be my first port of call. The swamp itself was dried up but around the carpark and boardwalk were a number of goodies. A female Rufous Whistler was my first and was quickly followed by 2 Yellow Honeyeaters, several singing Brown Honeyeaters and then back at the carpark a superb family party of Varied Sitellas, White-bellied Cuckoo Shrike, Northern Fantail, White-throated Honeyeaters and an entertaining Eastern Yellow Robin. 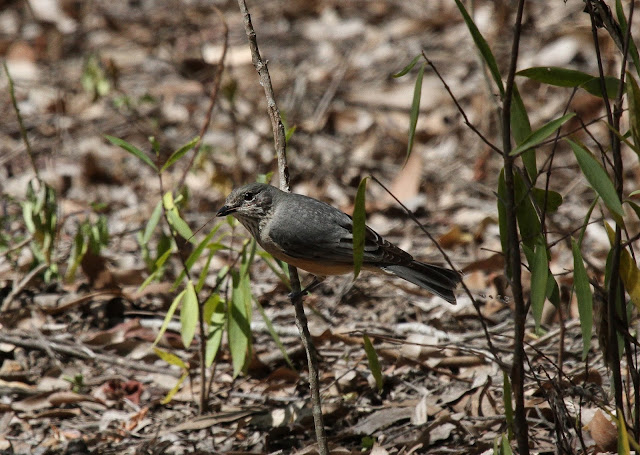 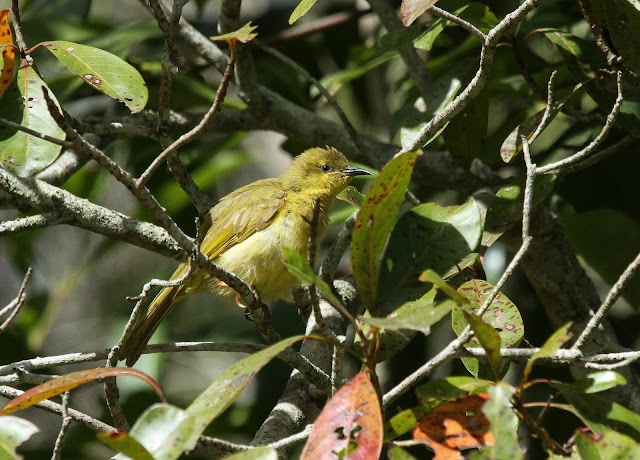 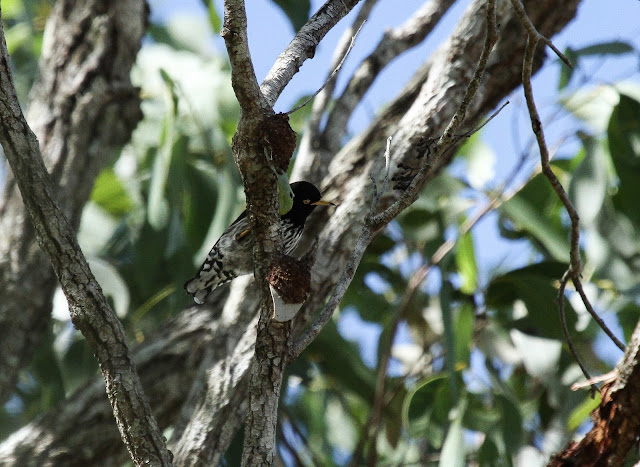 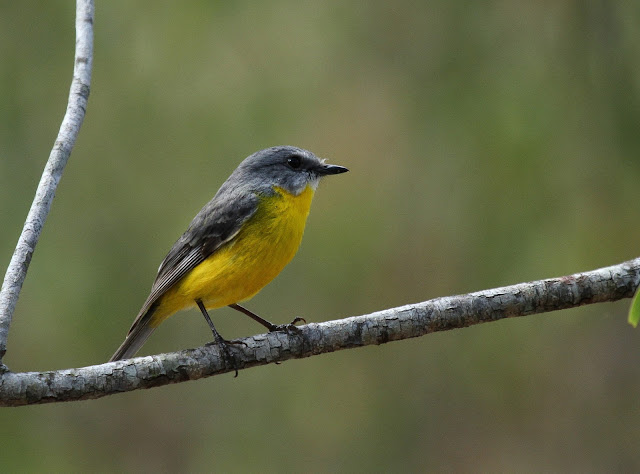 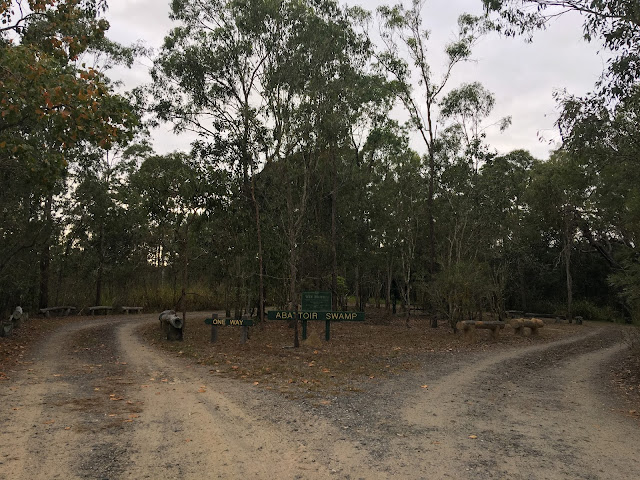 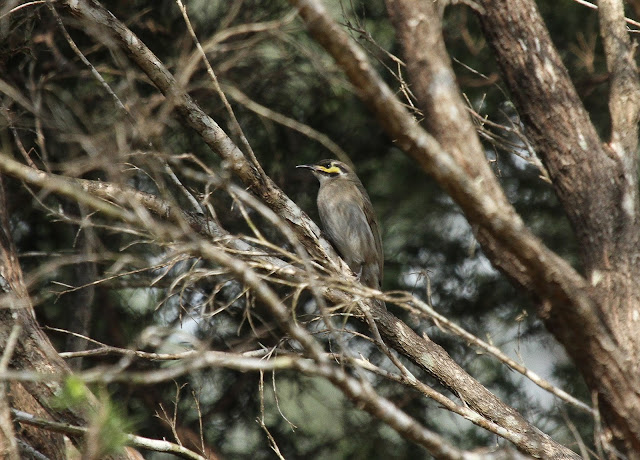 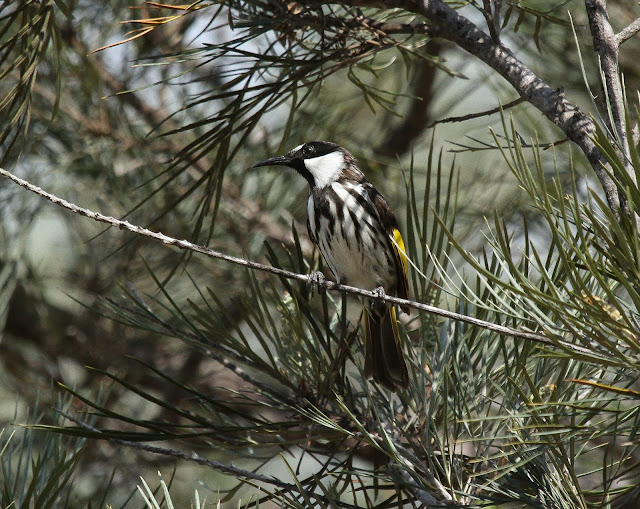 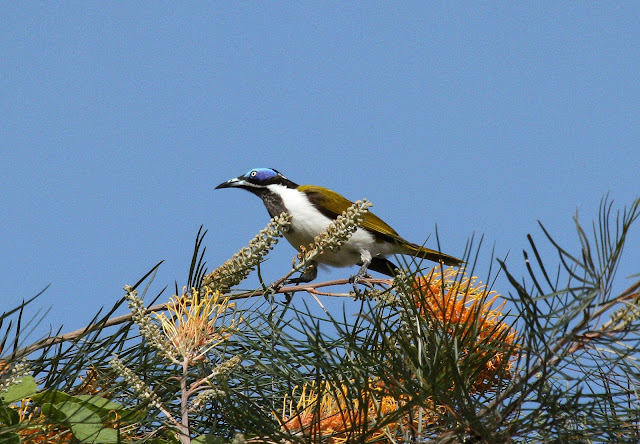 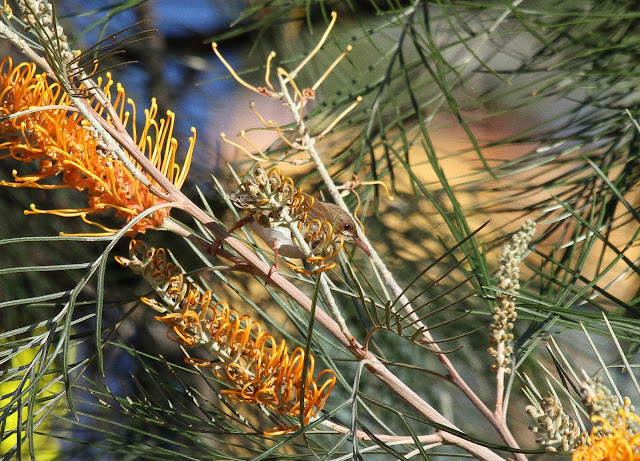 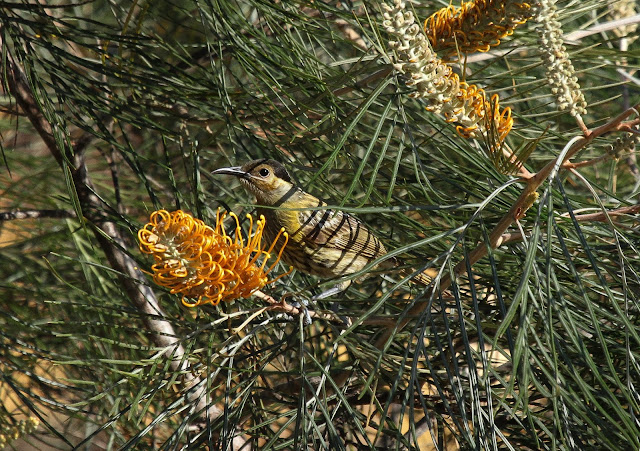 On the way back to Julaten I stopped at a roadside wetland I'd spotted earlier. I called it Edmonds Road Wetland after the nearest side road! With a bit of barbed wire fence 'negotiation' I got a unobstructed view of the wetland and it was full of birds - loads of c20 Hardhead, c30 Pacific Black Duck, 3 Australasian Grebes, 1 Australian Darter, 1 Australian Pelican, 1 Australian Ibis, 1 Little Pied Cormorant, 4 Comb-crested Jacanas and by the road a noisy flock of Scaly-breasted Lorikeets, Chestnut-breasted Mannikins and a Olive-backed Oriole. 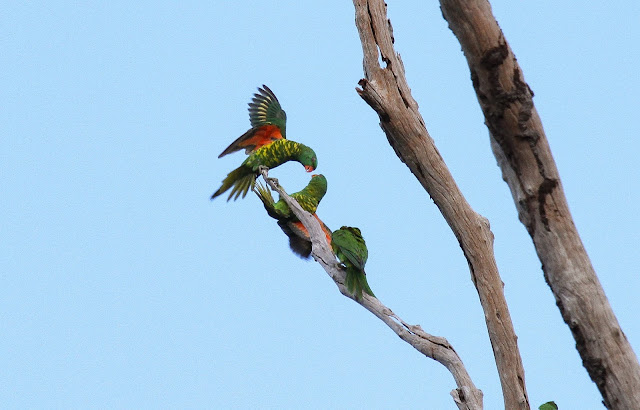 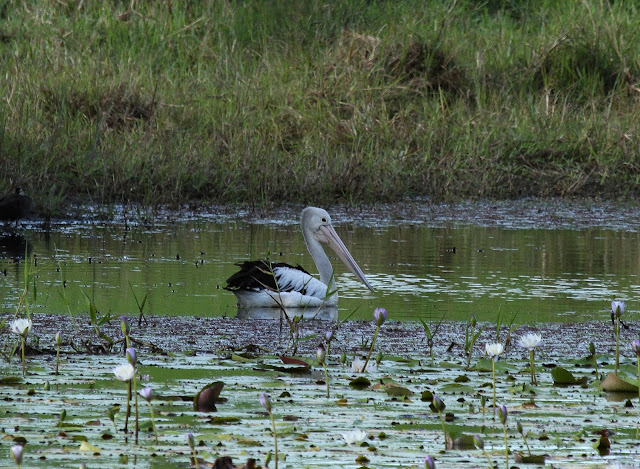 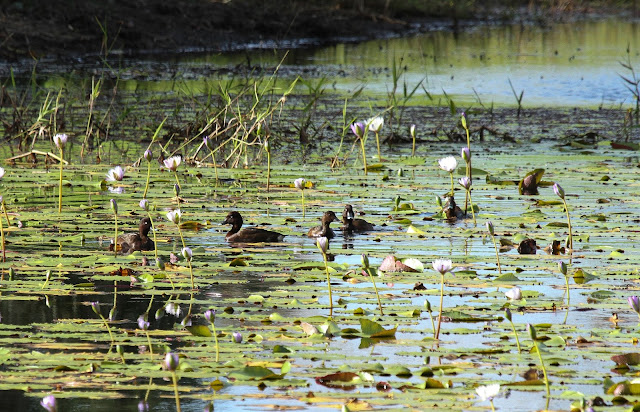 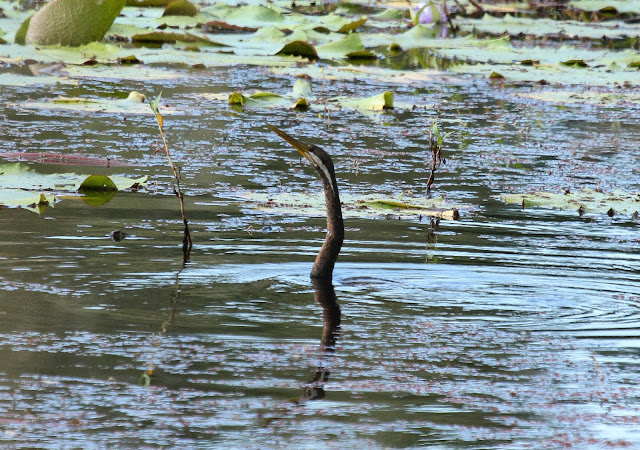 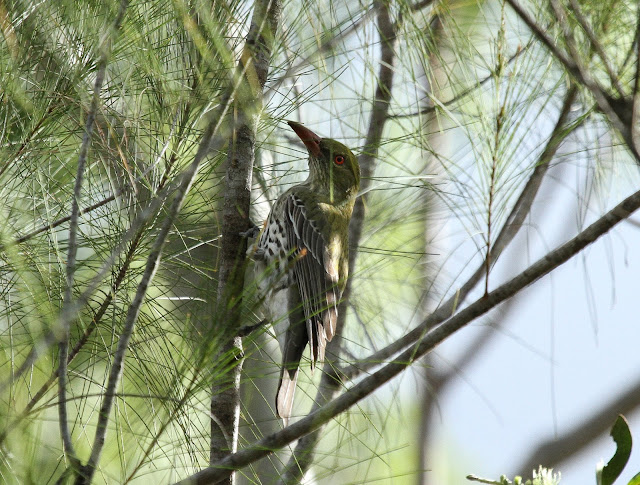 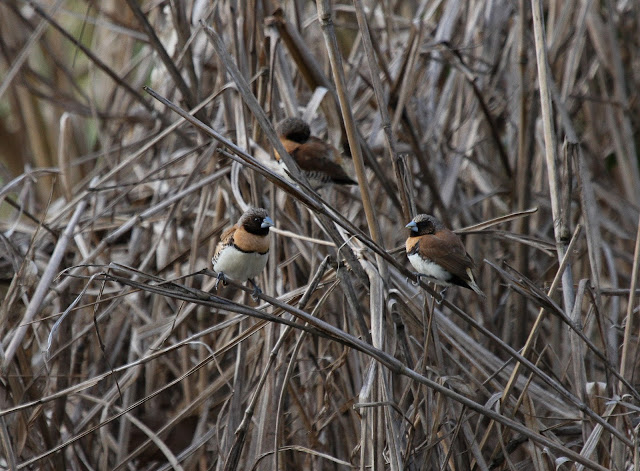 After checking in at Kingfisher Park I just had time for a very quick visit to their 'orchard' area before dusk. I met Rick Franks and Colin Lunt here who were a good couple of guys and some very welcome evening company. The birds around the orchard included Grey-headed Robin, Little Shrike Thrush, Grey Fantail, Scarlet Honeyeater, Pale Yellow Robin, Spectacled Monarch and Yellow-spotted Honeyeater. 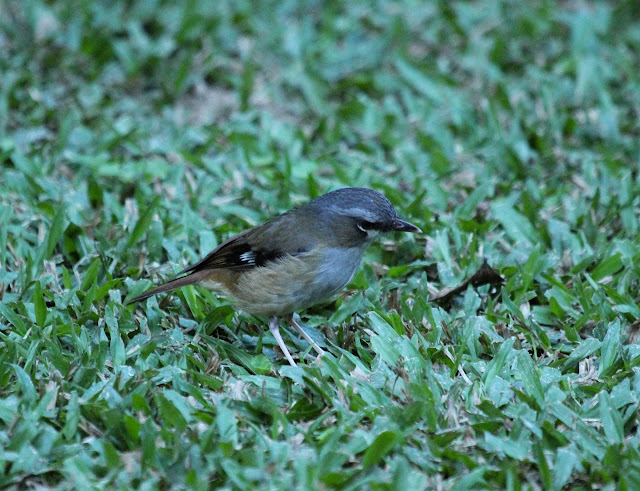 Grey-headed Robin
Posted by Chris at 20:36