The day dawned dark and wet in Paarl but after breakfast and a supermarket vist for provisions we headed on the drive north to the Tankwa Karoo NP for the next 2 nights.

Our route took us through the Bains Kloof Pass in the wet and with very low cloud meaning the views and birding were limited. On the far side of the pass as we'd dropped down there was a break in the rain so we stopped at a roadside campsite. The gate guard kindly let us in despite the place being closed and deserted and we had a very productive hour. Starting with very approachable Cape Spurfowl and followed up with Olive Thrush, a delightful group of 15 Swee Waxbills, 2 Cape Buntings and then a showy pair of Olive Woodpeckers. The first 2 Cape Batis of the trip were in the same trees as the woodpeckers and in a bottlebrush tree by the road were a large group of Cape White-eyes plus Southern Double-collared Sunbird and Orange-breasted Sunbird. 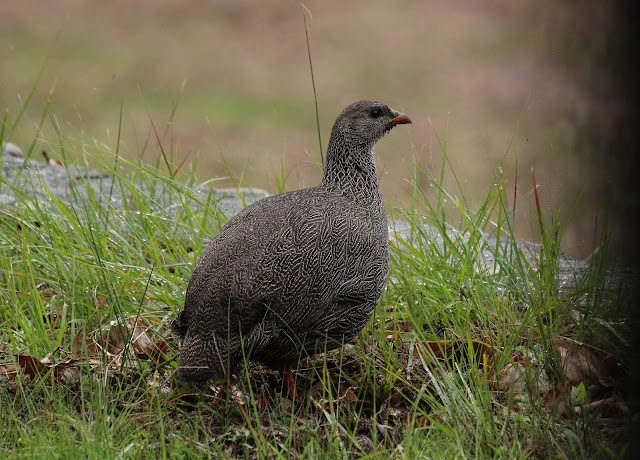 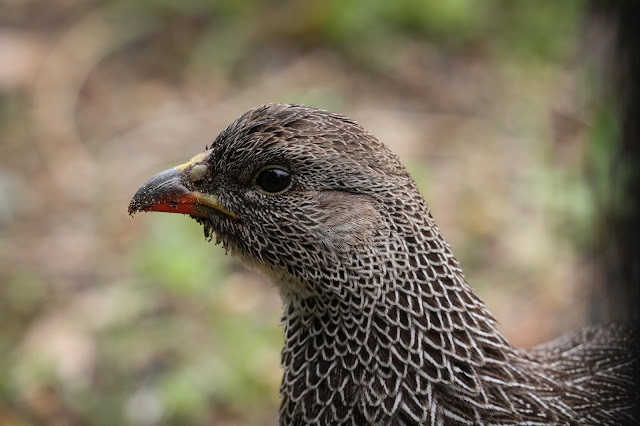 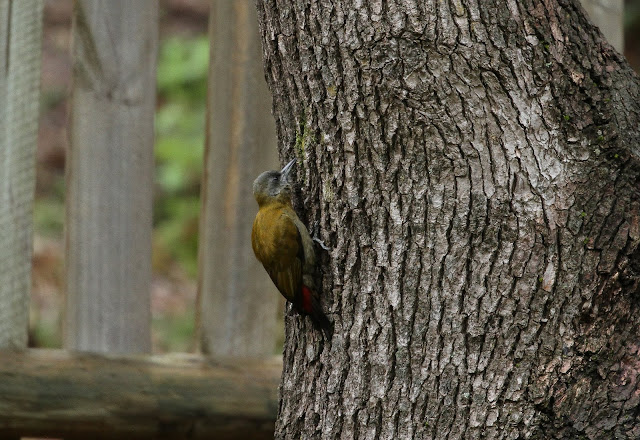 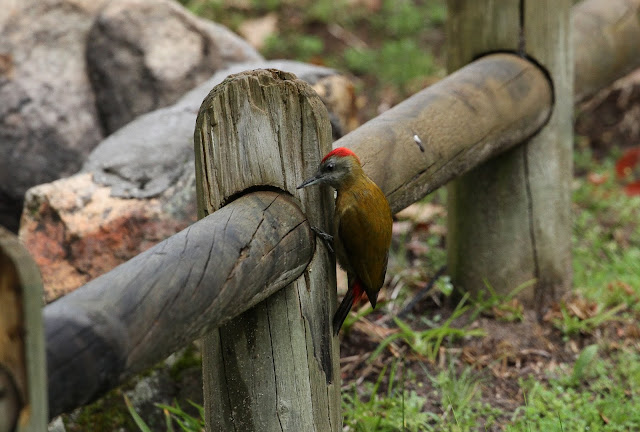 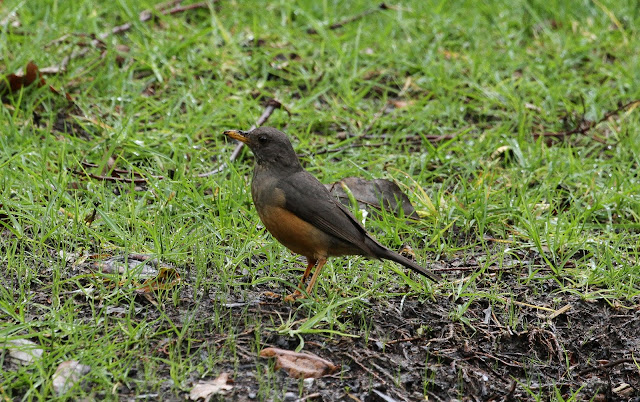 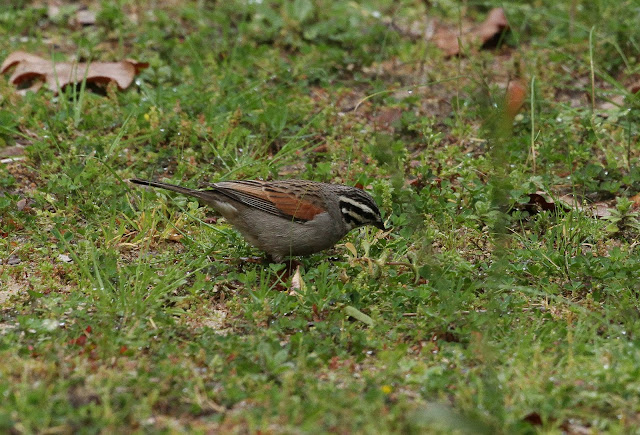 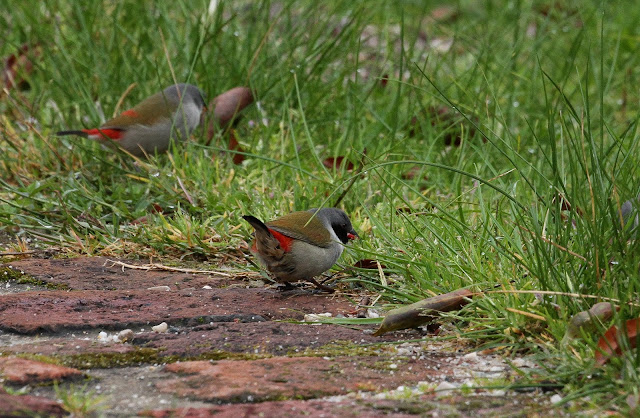 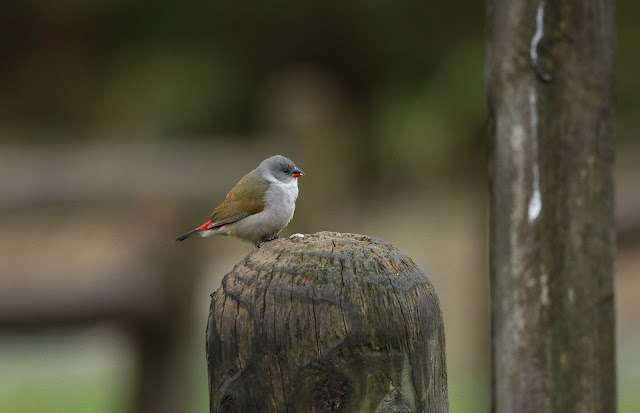 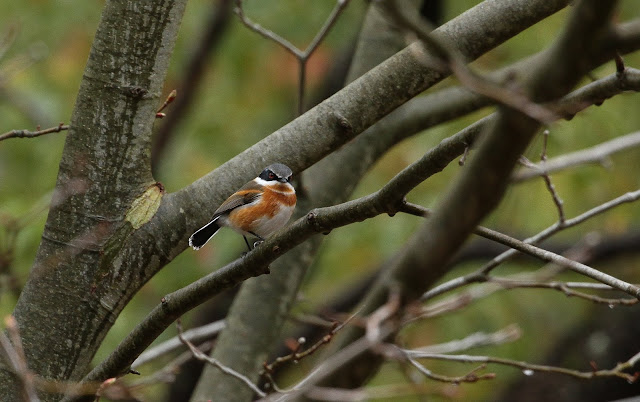 Moving on, we stopped in Ceres for coffee and a petrol top-up before continuing towards the Kankwa Karoo. We were soon on our first dirt roads of the trip and it was to stay that way for the next 2 days! Our first roadside stop was just after we hit the dirt roads where a female Mountain Wheatear was on low rocks plus a nice lurking Karoo Thrush and both Booted Eagle and White-necked Raven flew over. 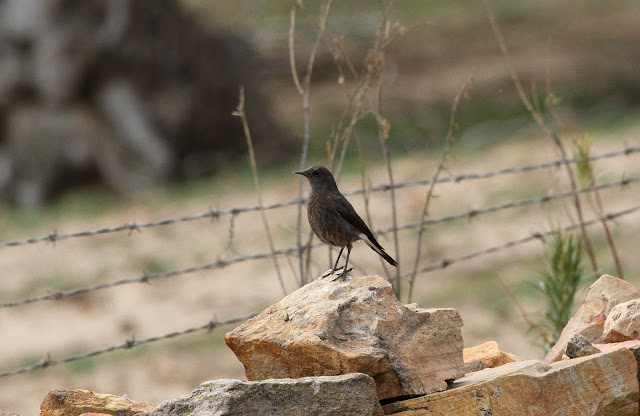 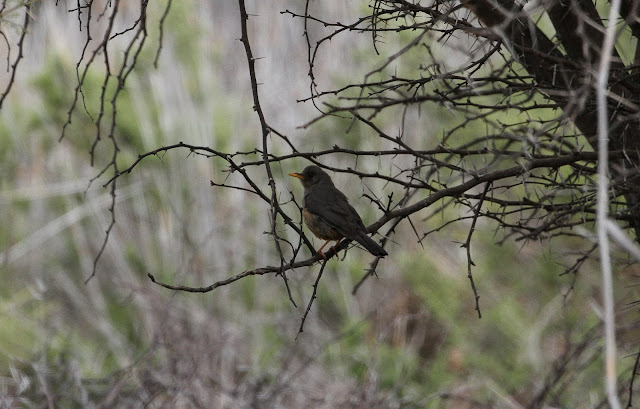 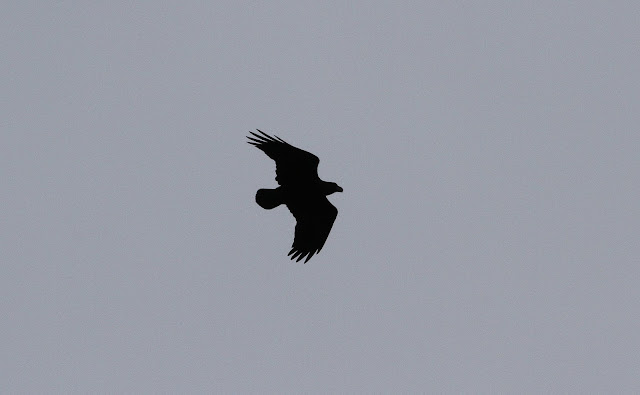 Ploughing on along rather variable roads (!) we eventually got to the park HQ only to find a note pinned to their door for us telling us to go back 35km to a turning and then find the Tankwa Guesthouse after another 15km. FFS, we'd only driven 150km on dirt roads already! We eventually found the strange, rather fort-like building at 18.40, 40 minutes after the park curfew! During the day we'd notched up some good roadside birds including a walk around the isolated rocky hill of Eirkop - 4 Common Ostrich, 4+ Alpine Swifts, 2 Common Fiscal, 2 Karoo Lark, 2 Red-capped Lark, 2 Large-billed Lark, several Rock Martins, Pale-winged Starling, White-throated Canary and Cape Sparrows. Then there were the chats - quite tricky to id until you got into them but we did positively id 1 Karoo Chat, c12 Tractrac Chats and 2 Familiar Chats. The late finish wasn't without it's advantages though - we scored with our first animals - Oryx, Red Hartebeest and Springboks in the gathering gloom!

We shared our accommodation with just 4 others, 2 South African couples who were travelling together. They were very hospitable, kindly giving us wine (we'd not been able to buy any due to it being a Sunday!) and helping us with our first experience of braai cooking! 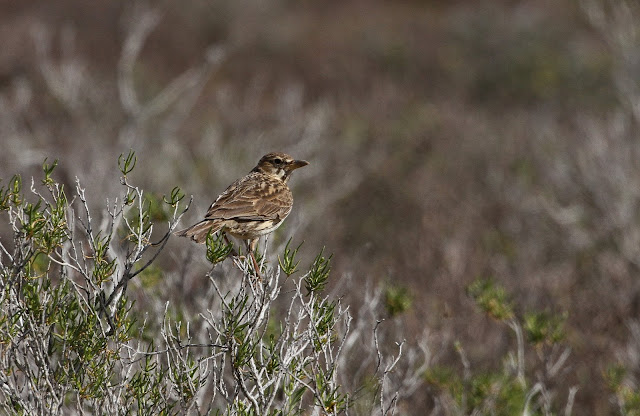 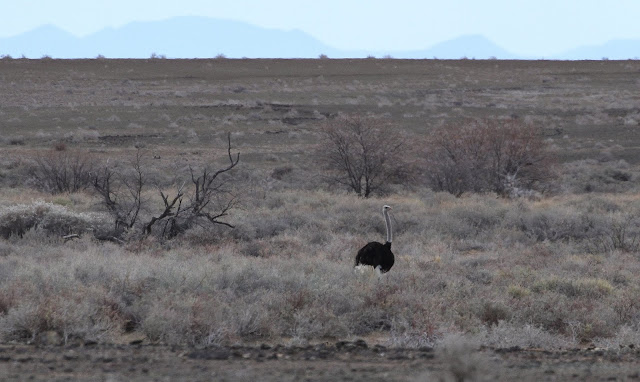 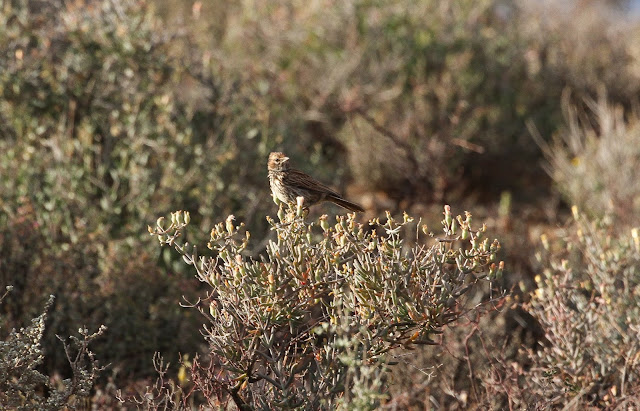 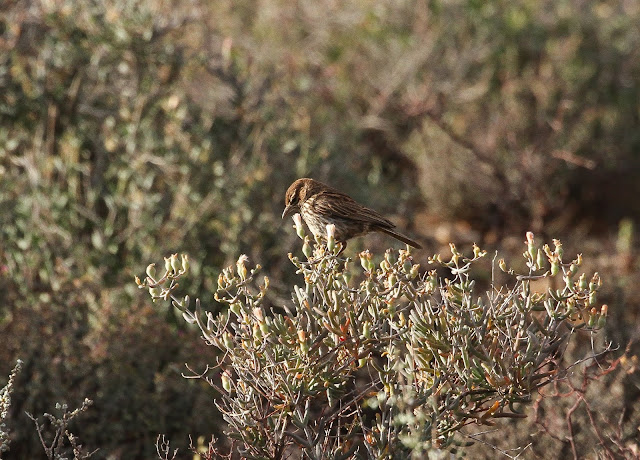 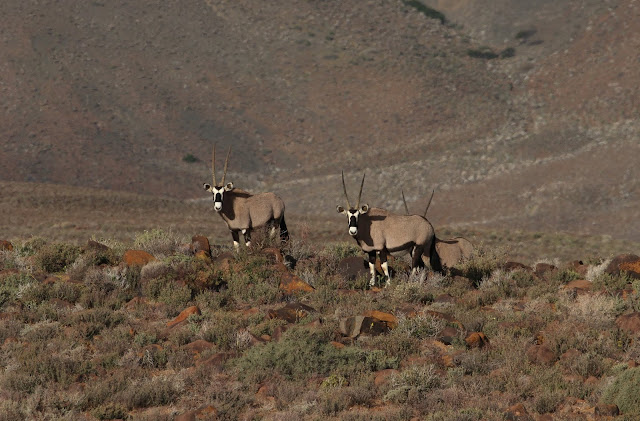 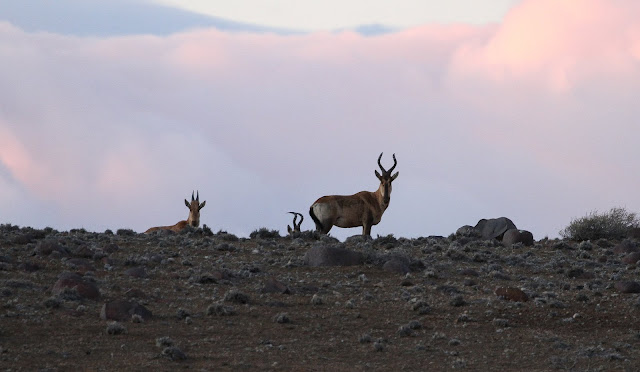 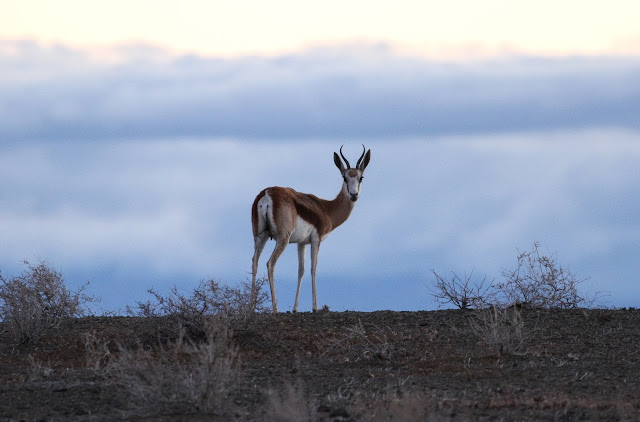 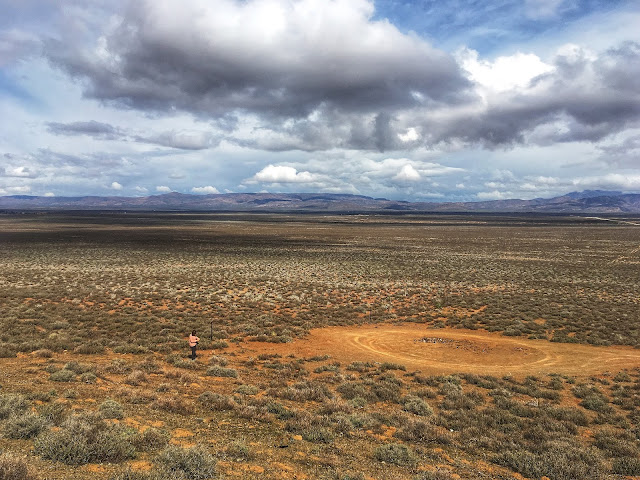 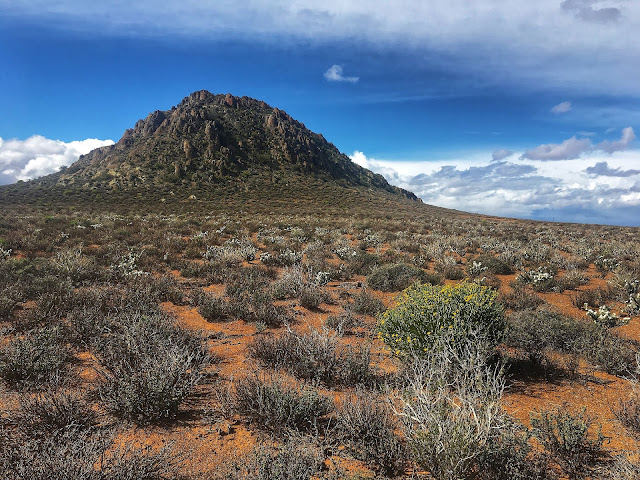 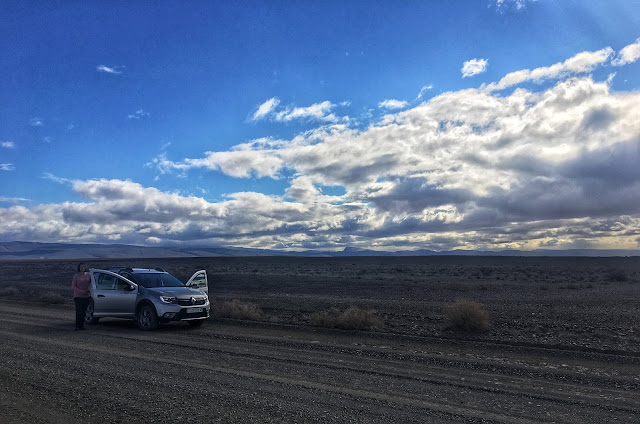 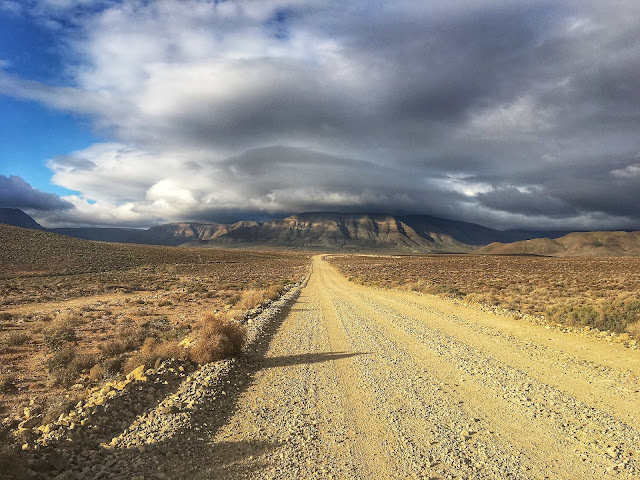 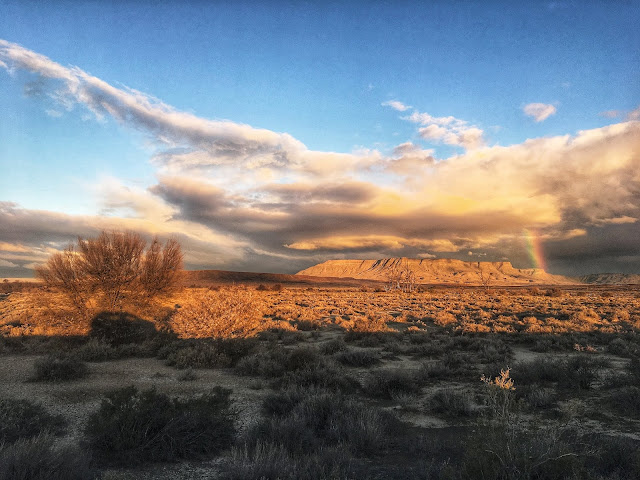 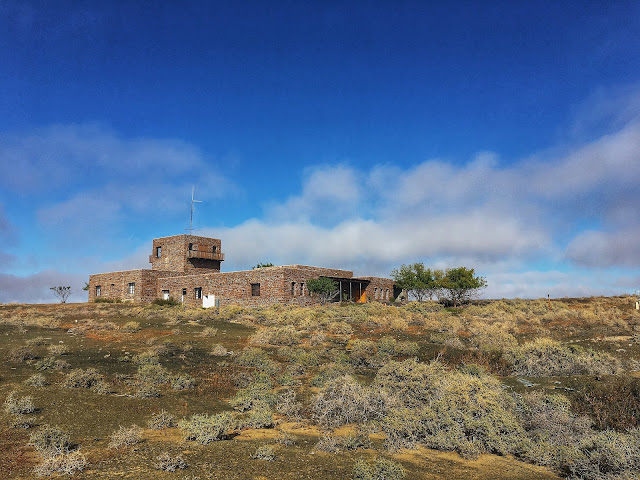